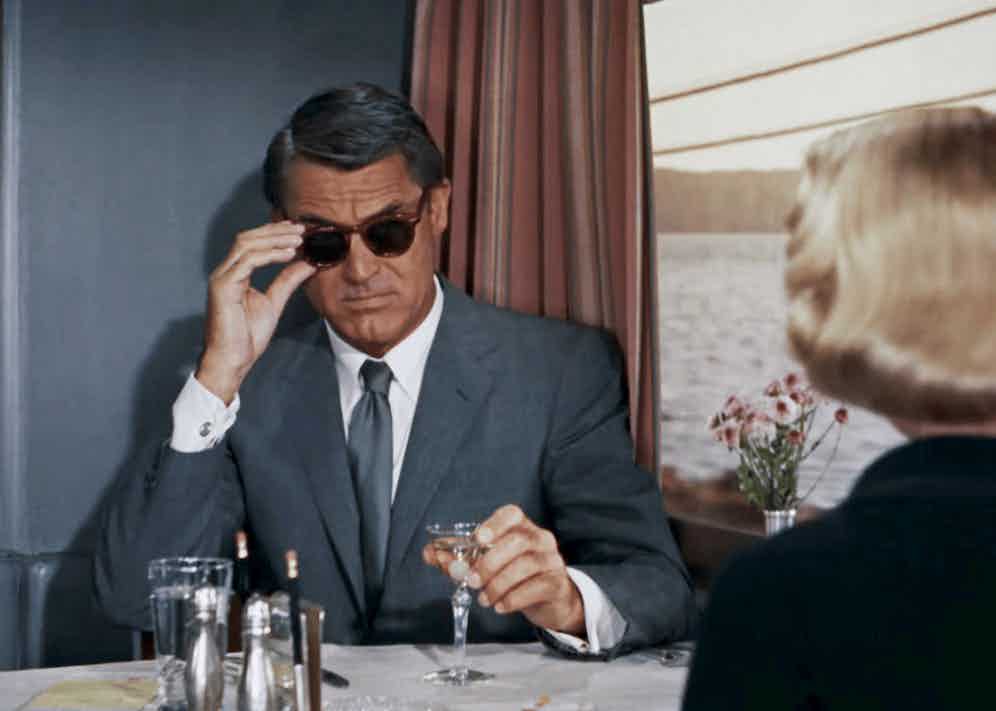 Cary Grant as Roger Thornhill in North by Northwest, 1959.

It is suspected that Alfred Hitchcock largely entrusted Cary Grant to dictate his own wardrobe in his films, most notably in thrillerNorth by Northwest(1959). As a man synonymous with effortless elegance and sophistication, it is no surprise that Grant chose an ensemble for his character which was to go down in cinematic history. Roger Thornhill is the smooth, charismatic and charming businessman in 1950s New York whose character is perfectly mirrored in his tailored attire. Mistakenly caught up in national espionage and on the run from a villainous organisation, Thornhill has no time to think about a clean shirt and dons the same outfit for almost the entire film. However, not once does the look lose its allure and it stands as a true testament that less is often more. Even Leonard, the henchman played by Martin Landau, recognises that“he’s a well-tailored one, isn’t he?”

The blue-grey single-breasted Glen check two-piece suit crafted from lightweight worsted wool with notched lapels and a three-roll-two button fastening accentuates Thornhill’s masculine physique and enables maximum charm when he is flirtatiously courting undercover agent Eve Kendall. Usually a business suit of this era would have featured double vents in the jacket, however, this time there are none. Paired with forward-pleated trousers worn high on the waist, the silhouette created is smooth, unbroken and elegant. Thornhill’s suit was likely made by British Savile Row tailor Kilgour, but if you want to replicate the look, Italian house Lardini’s adaptation has a more unstructured and fluid composition – more apt, perhaps, to allow for the physical movement needed as a fugitive.Channel his downplayed formality with a white dress shirt with French cuffs and a plain grey silk tie, keeping the look smart and minimalist. However, if you feel bare going without a pocket square, as Thornhill does, add a pair of silver and blue enamel cufflinks for a hint of extravagance. Stefano Bemer’s dark brown leather Derby shoes offer the perfect contrast to the greyish hues and keep this traditional look modern. Finish with a pair of tortoiseshell Ray-Bans to keep your identity hidden just in case you too find yourself on the run from a pair of henchmen with far lesser taste than your own.