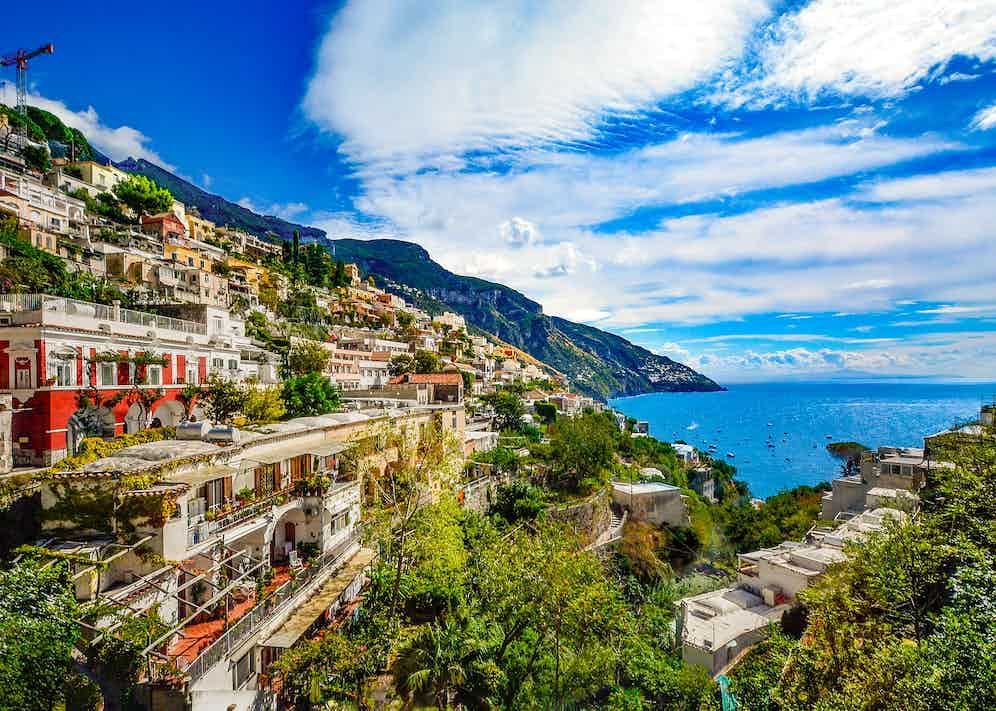 During the Middle Ages, the maritime republics of the Mediterranean Basin controlled trade routes and held extensive commercial and military power. According to historians, Amalfi was among the towns founded first along that beautiful stretch of Italian coastline, becoming an economically powerful maritime hub. Unfortunately, the picturesque town's moment of glory was short-lived: in 1137 Pisa plundered the city, ending Amalfi’s era of authority and commercial vigour. For centuries, that particular strip of coastline went into decline and in 1643, a third of Amalfi’s population died as a result of The Black Death. In the upcoming years, residents moved to Naples or sought a new life in the north of Italy, leaving the coast ravaged and desolated. In spite of everything, centuries later, Amalfi experienced a rebirth beginning some time around the 1920s, catalysed by the intrepid wanderings of upper-crust British expats and European high-society who were drawn to the otherworldliness of the preternaturally beautiful towns perched precariously among the rocky indentions along the coast.

Inevitably, the charming coast became the backdrop of classic movies, legendary love stories, and epic weddings, and for decades since, the picturesque cities of Amalfi, Ravello, and Positano have inspired writers (D. H. Lawrence, Gore Vidal, Andre Gide, and E. M. Forster), artists (Pablo Picasso and Rudolf Nureyev who owned his private island on the archipelago of Li Galli, off the Amalfi coast), composers (Richard Wagner), economists (John Maynard Keynes), socialites (Jackie Kennedy and her sister Lee), politicians (Winston Churchill, General Dwight Eisenhower) and silver screen stars (Greta Garbo, Humphrey Bogart). Few European places still capture the seductiveness and the beauty of a bygone era, but the Amalfi coast is the exception. With scenic villages and ravishingly quaint little towns, this coast is the pearl of the Il Bel Paese. Some of the most iconic images that seized the essence of the Italian La Dolce Vita and defined the modern era were captured here. Snapshots of Jackie Kennedy and Lee Radziwill strolling on the pier in Amalfi, Marella Agnelli vacationing with her husband, and Gina Lollobrigida filming with the always suave Humphrey Bogart have been mythicised and copied by entire generations. I was a teenager enrolled in a high school study abroad program in Italy when The Talented Mr. Ripley came out. I can recall every detail of Anthony Minghella’s blockbuster. Not only the plot and the complex characters but also the wardrobe choices of the beau monde, the beauty of the Italian scenery, and the glam of the 1950s. That was when I fell in love with Italy, the golden age of Italian cinema and that magnificent decade of excess, glory, and glam. 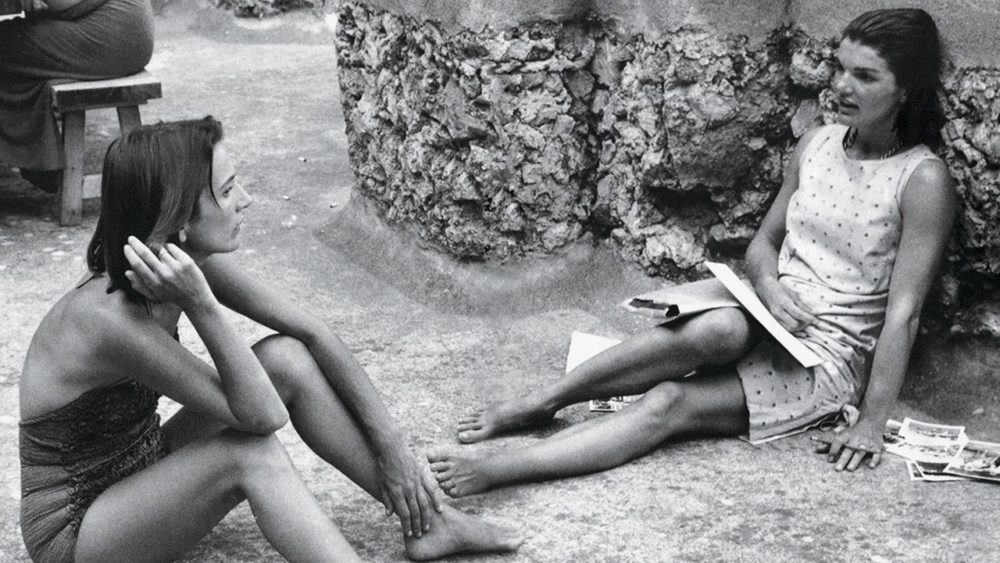 One week later, I took the train to Campania and visited the entire Amalfi coast. Since then, I have returned a dozen times and I started seeing the Italian coast as the epitome of glamour. Having said that, The Talented Mr. Ripley wasn’t the only movie focused on the beauty of the Amalfi coast. Blockbusters like A Good Woman, Only You and Beat the Devil made the coastline notorious. But perhaps the strongest correlation between the Amalfi coast and the glamour of a bygone era is found in the wild 1960s and the emerging of the European celebrity culture. It was the infamous summer of 1962 when a beautiful, still carefree Jacqueline Kennedy descended on Ravello with her entourage. Accompanied by her equally glamorous sister Lee Radziwill and her two young children John and Caroline, the citizens of Ravello welcomed Jackie like a queen. She received Ravello’s honorary citizenship and everywhere she went, masses of people followed her enthusiastically. Some of Jackie’s most iconic photographs are from the three-week holiday in the Sorrentine Peninsula, during which she met the equally fascinating Italian lothario and industrialist Giovanni “Gianni” Agnelli. During the Amalfi vacation, the two became inseparable and images of them on yachts, dining at restaurants with other distinguished guests or simply walking around the city became emblematic of an era. In the company of Agnelli, Jackie’s “low key” vacation became a media circus and the European paparazzi immortalized every glamorous outing, while the international press began speculating about a potential liaison. The affair rumours reached JFK who famously called his wife and said “More Caroline, less Gianni.” But by then, the entire world had been lured into the bubble of La Dolce Vita, where tastemakers, heirs to great fortunes, socialites, and international jet-setters excited the imaginations of ordinary people with their escapades and glamorous ventures.

Needless to say that capturing those images with two equally photogenic people in a beautiful setting like Ravello, catapulted the Amalfi coast into the limelight. Jackie never returned to Amalfi but the Agnelli family maintained a Pied-à-Terre on the coast, being often photographed in the company of their grandsons John and Lapo Elkann. Decades later, a new generation of aristocrats and socialites keep Amalfi’s allure alive. Europe’s latest golden couple, Beatrice Borromeo and Pierre Casiraghi have been seen vacationing in Positano. And the paparazzi photographed Lapo Elkann in the company of girlfriends Shermine Shahrivar (2016) and Gala Kalchbrenner (2018) in the same place - if it ain't broke, don't fix it, evidently.

There’s another illustrious erudite and giant of American literature whose name is forever coupled with Ravello. Gore Vidal, a relative of Jackie Kennedy by marriage, made Ravello his home in the 1970s. In his breathtaking mansion, La Rondinaia, mounted on a cliff above the Tyrrhenian Sea, he entertained a multitude of famous guests such as Princess Margaret, Rudolph Nureyev, Hillary Clinton, and Susan Sarandon. Gore’s popularity and prominence on the Amalfi coast got him the nickname of the “Pope of Ravello.” His sexual soirees and hedonistic parties infused sexuality into the traditional rigid Southern Italian society. 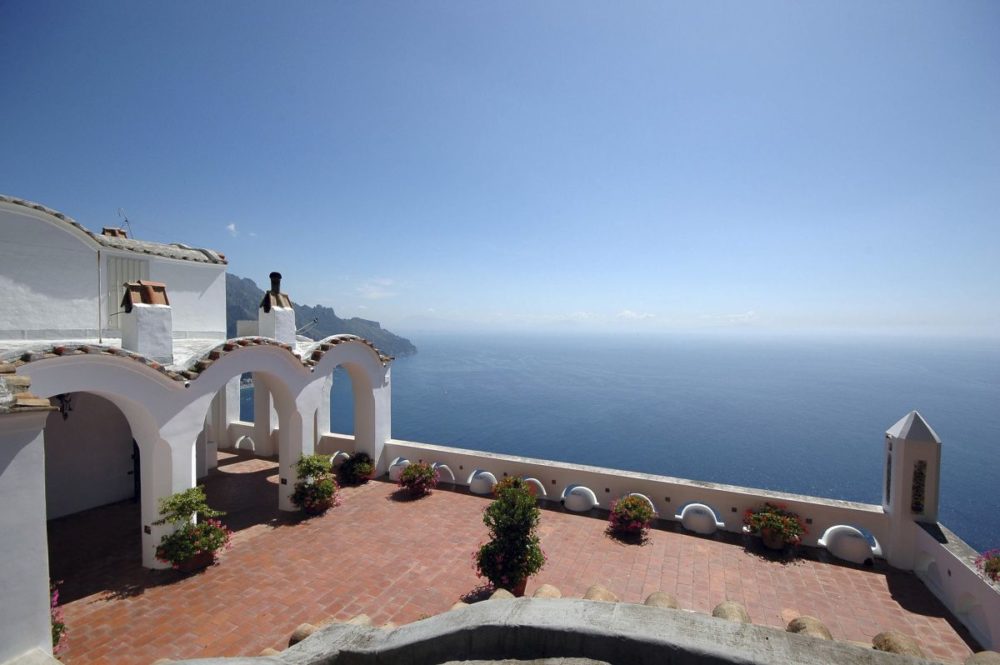 The view from the terrace of Gore Vidal's former Amalfi home.

If you're visiting the Amalfi coast this summer, we can't help you find literary orgies, but we can point you in the way of what to wear. The recipe for success is moderation, boringly enough. Push the boat out too far and you'll look like a rather uncouth but well-monied chap who let his daughter do his styling, but try to downplay it too much and the best that can happen is that locals take you for the archetypal scruffy billionaire (maitre d's of nice restaurants won't be fooled however.) The middle ground means crisp linen shirts in white and a variety of pastel shades, which are easily interchangeable with neutral tone shorts or trousers. Unless you intend to be slogging it up and down the hills of Amalfi, we'd suggest sticking to classic footwear such as loafers (Baudoin & Lange make the perfect smart-casual styles and are some of the most comfortable we've ever tried on), but be sure to bring along a pair of leather or suede sneakers by the likes of C.QP.