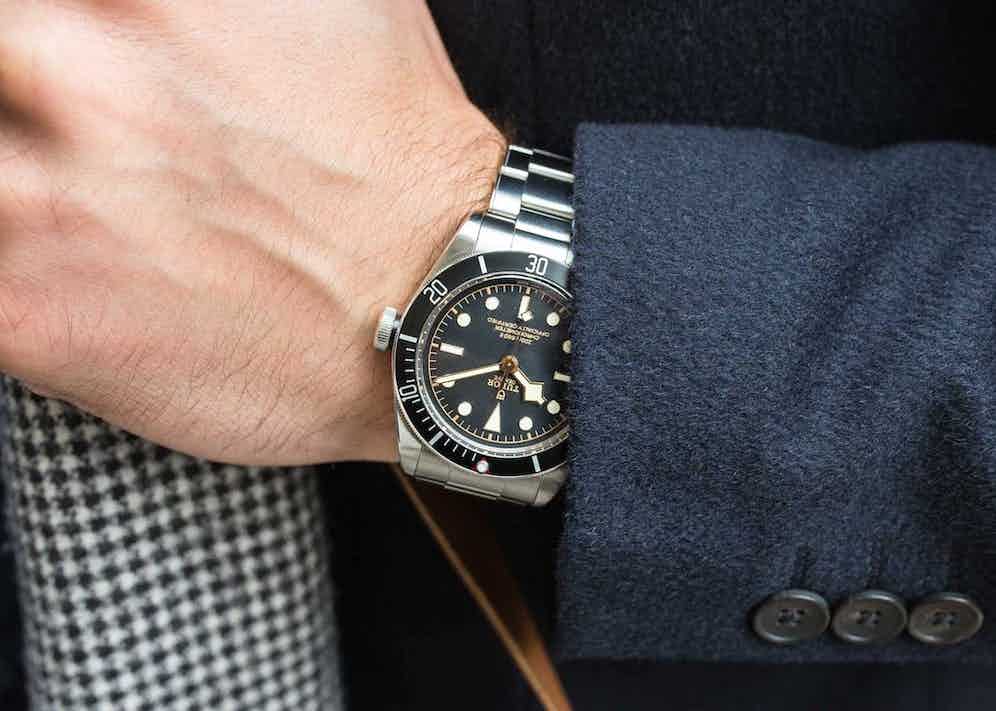 In its short, decade long life Tudor’s defining dive watch, the Black Bay has been on a wild ride. Since it was released to critical acclaim in 2012, we’ve seen the line get better and better, so much so that we recently saw a Unique Black Bay GMT sell at Only Watch for an eye-watering 650,000 CHF. If you missed out on that lot don’t worry, because we’ve found a great example of the classic Black Bay.

What prompted Hans Wilsdorf, the legendary founder of Rolex, to create a second brand named Tudor during the late ’40s? While theories abound, the most cogent of these suggests that Wilsdorf was about to shepherd Rolex into what would be an enduring era of profound commercial success coinciding with his launch of the sports model, the Submariner, in 1953 and the GMT-Master in 1954. Ever the canny industrialist, it is highly conceivable that Wilsdorf realised that while he could produce his famous waterproof Oyster case and patented screw-down crown in abundance, he was limited in terms of capacity by the number of Rolex movements he could create. 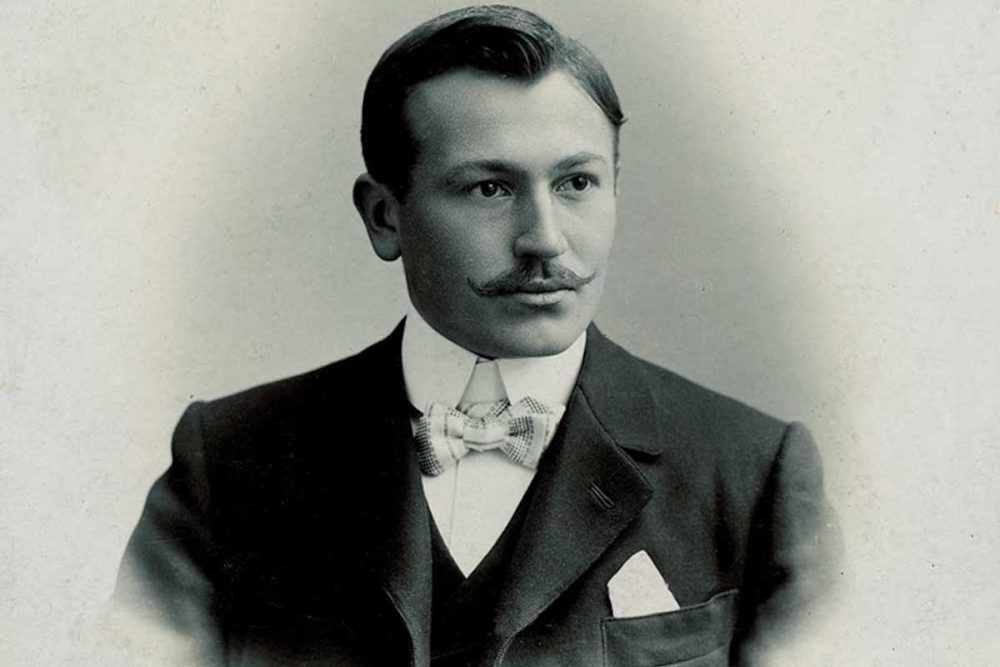 Hans Wilsdorf, the founder of Rolex and Tudor

One can imagine Wilsdorf arriving at this logical solution: Why not use Rolex cases, crowns and bracelets and combine them with the best outsourced movements in the Swiss watch industry? Since these movements were his own vision, and distinct from the Rolex movements, Wilsdorf could not call these watches Rolexes. So, he decided instead to create a new brand named ‘Tudor’.

To this day, Tudor has remained a brand for watches featuring all of Rolex’s iconic waterproof technology, in combination with some of the best-made, dependable movements in the industry. Over the years, because of their lower price, Tudor Submariners have become some of the most frequently adopted timepieces by armed forces around the world — in particular by France’s Marine Nationale — and there is documented evidence showing that the Argentine police have regularly issued Tudor Subs to their personnel.

One great advantage of their lower price point is this: While Rolex remained somewhat conservative in styling, and has been slow to evolve, the more youth-oriented Tudor has always been home to tremendous design innovation. From the famous ‘Home Plate’ chronographs to the iconic ‘Snowflake’ Submariners, Tudor has never been afraid to push watch designs forward, and in so doing has achieved some of the most memorable timepieces in history. 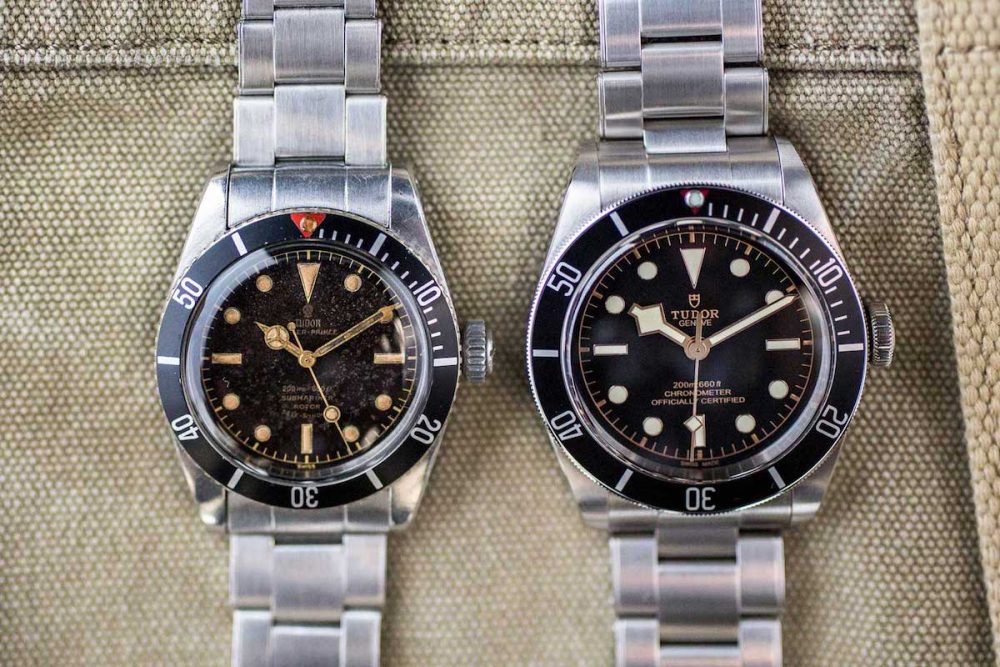 Side by side, the shared identity between the vintage Submariner and the modern Black Bay is clear.

From 1954 to 1978, Tudor created some of the world’s most collectible diving watches. The first Tudor Submariner was the ref. 7922, which in terms of case and dial iconography was very similar to the Rolex ref. 6538 of that era. And, like the ref. 6538, it boasted a herculean 8mm crown. These watches exist with both 100-metre as well as 200-metre depth ratings. In the late ’50s, the ref. 7922 was also released in a version with a smaller 6mm crown, similar to that found on Rolex’s ref. 5508 Submariner. The caliber 390 automatic movement used for the ref. 7922 was manufactured for Tudor by a company named Fabrique d’Ébauches de Fleurier. 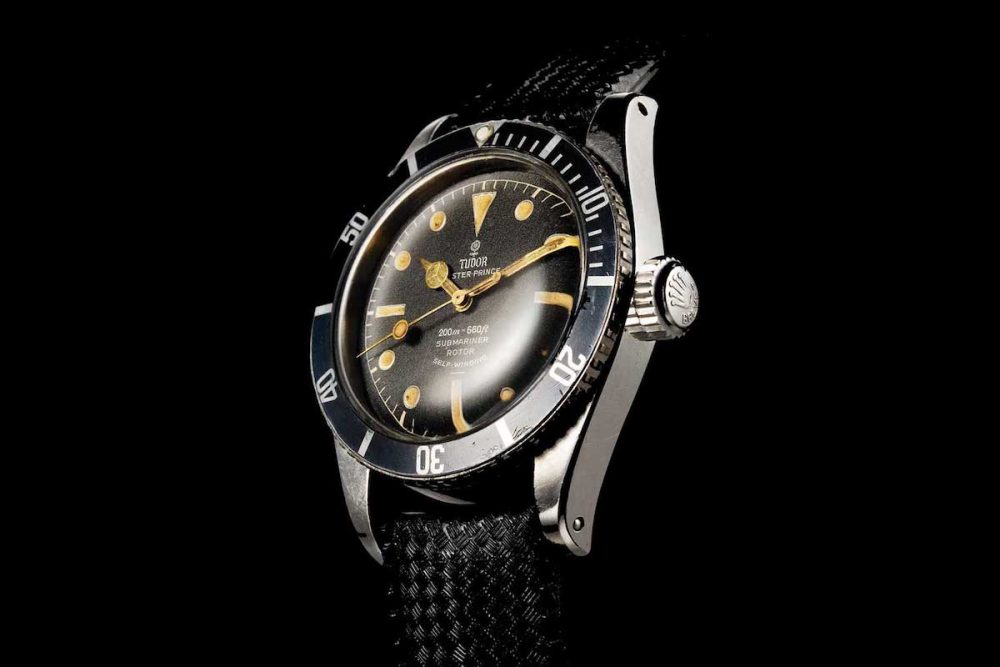 The Tudor Ref. 7922, the original Tudor Sub, and one of the inspirations for the Black Bay.

The model ref. 7923 is interesting, as it is the only manual-winding Submariner ever produced either by Rolex or Tudor. Its basic iconography closely resembles that of the smaller-crown ref. 7922 watches. The Tudor Submariner ref. 7924 is a subtle evolution of the ref. 7922, and was offered in a thicker case with a large crown, as well as a thinner case with small-crown configurations.

The second famous Tudor, the ref. 7928 Submariner, emerged around 1960 and was produced until 1968. It was distinguished by crown guards similar to those found on the Rolex ref. 5512/5513 watches. Early models boasted both square and pointed crown guards, as well as gilt dials, and are breathtakingly beautiful. The earliest of the ref. 7928 pieces feature a unique combination of gilt chapter ring, gilt writing and square crown guards — they’re among the most collectible Tudor Submariners of all time. 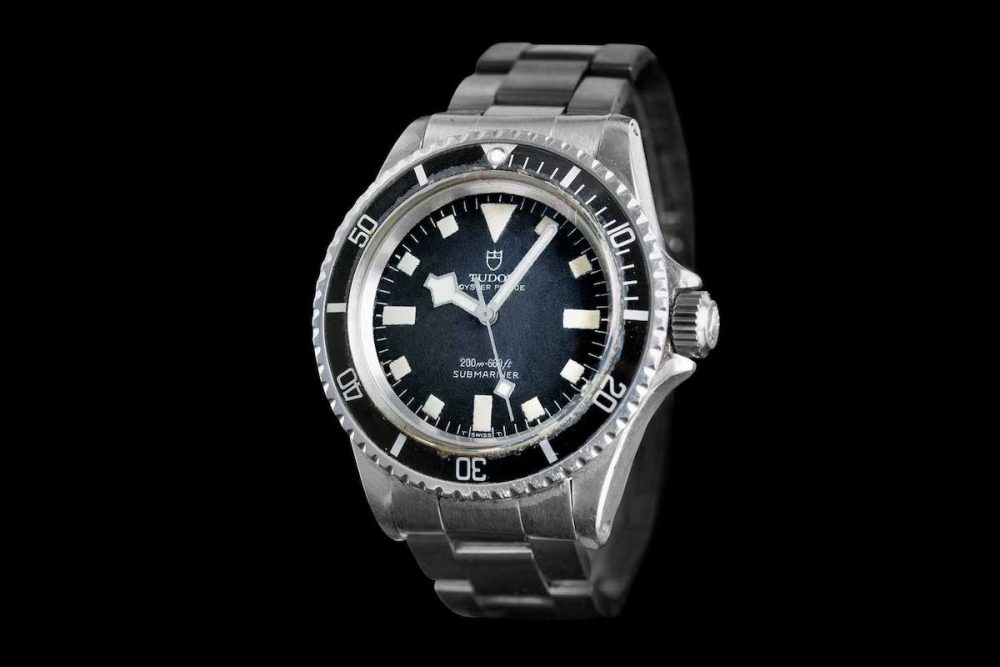 With its 'Snowflake' dial design, the ref. 7016 marked the first time the Tudor Sub explored its own identity.

In 1968, Tudor created what is probably its most famous diving watch, the ref. 7016 Submariner with unique square markers and ‘Snowflake’ hands powered by reliable ETA 2483 movements. A second version, the ref. 7021, powered by the ETA 2484 — which was distinguished by a date feature — was also offered. These watches represented a paradigm shift in Tudor’s design identity as, for the very first time, it moved away from traditional Rolex iconography completely. It should be noted, however, that the vast majority of ref. 7016/7021 watches suffer some amount of dial discolouration over the years.

This was resolved in 1975 with the introduction of the Tudor ref. 9401 and ref. 9411 models, which looked very similar to the previous incarnation of the Snowflake Submariner, only now with much more stable dials. Amongst the most collectible of these were the ref. 9401 Marine Nationale watches issued to the French navy, which are distinguished by quartermaster markings on their casebacks. Just to keep things interesting, all varieties of the Snowflake Submariners were available with either blue or black dials. 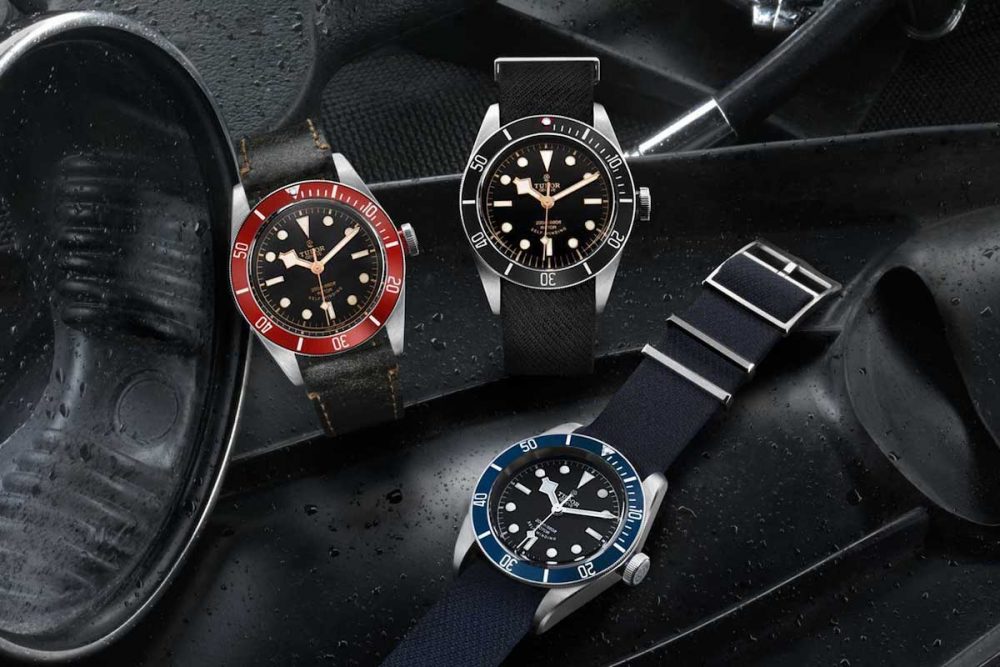 In 2015, before the shift to in-house calibres, this is what the core Black Bay Family looked like; red, black and blue.

“Why should other brands have all the fun?” This was undoubtedly the question going through the minds of the powers that be at Tudor, as they penned the architectural blueprint of the un forgettable Tudor Heritage Black Bay. Like many other heritage-themed timepieces in its collection, the Black Bay pays tribute to the special models of its brand’s glorious past. The difference is that the Black Bay is not a complete recreation of an older model; instead, it’s a tribute to Tudor’s 60-year involvement with diving watches, and integrates design elements from different eras.

The gilt (gold-printed) dial replete with Tudor rose motif, which in 2016 evolved into the Tudor shield, the case and the big crown of the Black Bay all come from the ref. 7922, the very first dive watch created by Tudor in 1954.

But the magic of the Black Bay is in the sensitive touches — things that the contemporary client will enjoy, but will resonate even more deeply with a vintage collector. For example, the particular color of the dials of the watch, which harkens to the naturally occurring discolouration of vintage black dials as their lacquer fades over time. The gilt on the dial has been especially enriched in colour to create a sense of vintage patina. Even the elements surrounding the luminous indices have been treated with rose gold to create the sense of warmth evocated by vintage watches. 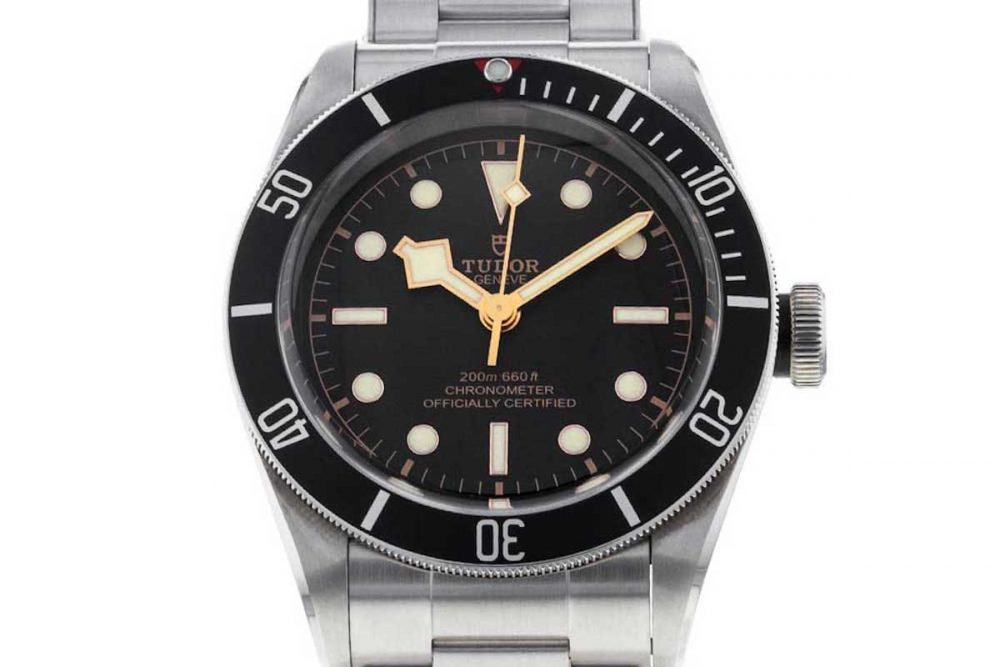 Similarly, the bezel of the watch is modelled after a bezel from a vintage watch in the brand’s collection that changed colour after almost 60 years. That the bezel is created using anodised aluminium means that it can continue to change in colour as the years pass. This same aluminium colour is repeated with the small insert on the stem of the 8mm crown, which is today adorned with the Tudor rose and not the Rolex coronet found on vintage watches. The sapphire crystal of the Black Bay is domed to replicate the Plexiglas crystals of the past.

The Snowflake hands of the Black Bay come from the ref. 7016 and ref. 9401 watches. With the use of similar hands on the Pelagos, it’s interesting to note, the majority of Tudor’s dive watches now bear these iconic Snowflake hands. The price of the Black Bay evokes the feeling that you’ve just been told something that’s too good to be true: The Black Bay starts at a mind boggling CHF3,200, and what with the watches now being fitted with Tudor’s own movement it makes the 41mm dive watch of such good value, it’s almost criminal.

The Black Bay is destined to become one of those watches whose desirability transcends its price becoming one of the most actively sourced timepieces, internationally. One can only imagine that Hans Wilsdorf would approve resoundingly.