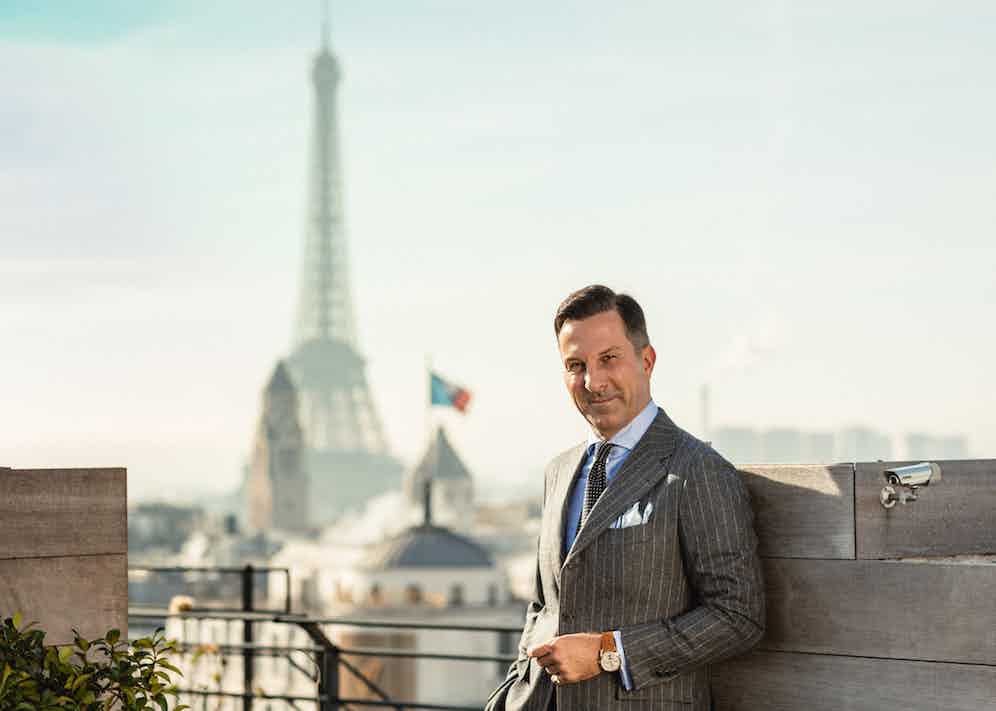 Alexander Kraft sporting a grey chalkstripe suit from Orazio Luciano. Photo by Milad Abedi.
Brexit may have threatened the entente cordiale, but by all accounts Frenchmen are not queueing at chic boutiques to return their blazers and Barbours, Chesterfield coats and tattersall check shirts, nor are they putting into storage - with the hint of a tear in the eye - their polished brown brogues. Au contraire. While cultural appropriation may have become some kind of intellectually feeble bête noire among the student classes - thus presumably condemning any Englishmen who wears Bretons or berets, for fear of offending our neighbours across the Channel - over there Frenchmen, rueing their revolution, still continue to look here to both monarchy and men of subtle taste for their style leadership. They even have a name for it: le style Anglais.
Simply picture a well-to-do Parisian gent, or an habitué of the Riviera, steering towards middle-age, already well at home in his middle-class, wearing, say, a Grenfell overcoat, and on his feet shoes from Edward Green or, since they sound so much more English, Crockett & Jones. He pines over Anderson & Sheppard suits and shirts from Budd or - since Prance Scharles wears them - Turnbull & Asser. He used to favour Eton too - alma mater of the establishment elite! - until he found out they’re in fact Swedish. At night he slips into Derek Rose pyjamas. He wakes to croissants and strong coffee, but he’s slept like an Englishman.
This is no send-up. Rather than hamming up English style, le Style Anglais might well be regarded as its further refinement through a French lens. If the archetype of formal English dressing often sees it praised for its ‘quirky’ breaking of the rules - its chromatic eccentricities and overly-emphatic patterns, clash and be damned - then le style Anglais seeks a much more subtle take. It’s less the English style watcher’s habit of venerating the once envelope-pushing wardrobe of Edward VIII (fine for the Prince of Wales, less approachable for everyone else) so much as paying attention to England’s heritage of conservative menswear as it has been respected, maintained and worn for a century or more.
“The average Englishman is generally less well dressed than the French of the same kind,” as the French men’s style magazine Monsieur inevitably noted a few years ago, going on to warn that some supposedly English styles are closer to parody than panache. “They’re sometimes a diversion, even a corruption of what the real elegant [Englishman] wears. It is thus necessary to be wary of what one believes to be English.”
The result is a Frenchman who, as the cliche might have it, looks more English than the Englishman. He’s the homme who might still appreciate some distinction between workday and weekend clothing, between city and country clothing - because, naturally, the Englishman just loves nature - but, while he will wear browns and beiges, he isn’t likely to wear red or green trousers any time soon. He’ll wear tweed, but three-pieces is at least one too many. A regimental striped tie passes muster, but the cravat simply passes by, thank you very much.
But why does le style Anglais exist at all? After all, while amiable ties between the English and French began with the Entente Cordiale of 1904, and of course the two nations were allies in two world wars, history before and since has hardly predicted that one nation’s people would, in dress of all things, seek to emulate those of another. It was the French President, Charles de Gaulle, after all, who for years blocked British entry into the European common market that the UK is now leaving. Capturing the complexity of the relationship, the British have been described as France’s “most dear enemies”.
One theory has it that gender roles in France remain, comparatively-speaking, traditional: it’s the women who are expected to dazzle; men are expected to project masculinity, and English style - Anglo-Saxon style even - embodies that. There’s little that’s fey or pretty about it.
Some have instead argued that it functions as a kind of cultural exchange. The post-war period saw the English, along with the rest of the world, look to the French for womenswear - and there’s a case to be made that the French fashion industry, aided by regular breathless surveys of whatever ‘chic’ French girls are doing, still dominates womenswear. Yet the French, comparatively late to develop a domestic menswear industry, looked back to the English for advice on how to wear the trousers.
But perhaps the bigger question is, for how long? French menswear brands are, finally, on the up. ‘Le style Gallic’ may be a trend just around the corner. And certainly some might well suggest that le style Anglais actually exists more in the minds of the English vision of the French than for the French themselves: that the English rather enjoy imagining that, sartorially at least, your typical Frenchie aspires solely to gently foxed collars, narrow wale corduroy - not cord du roi, mind - and affecting the look of an extra in The Crown. It’s some small compensation for the French’s excellence in food, cheese, wine, holidays, trains, luxury and general sexiness.
Well, maybe. But old rivalries die hard. “As candour is my foible I must admit that the French men do copy the English style, and perhaps it is on this very account (as imitations are generally failures) you seldom see a well dressed man among them,” as a commentator in The London Magazine and Review presciently noted in 1825. “All foreigners are struck by the number of well dressed men to be seen in the streets of London”.
Plus ca change, plus c’est la meme chose, indeed.