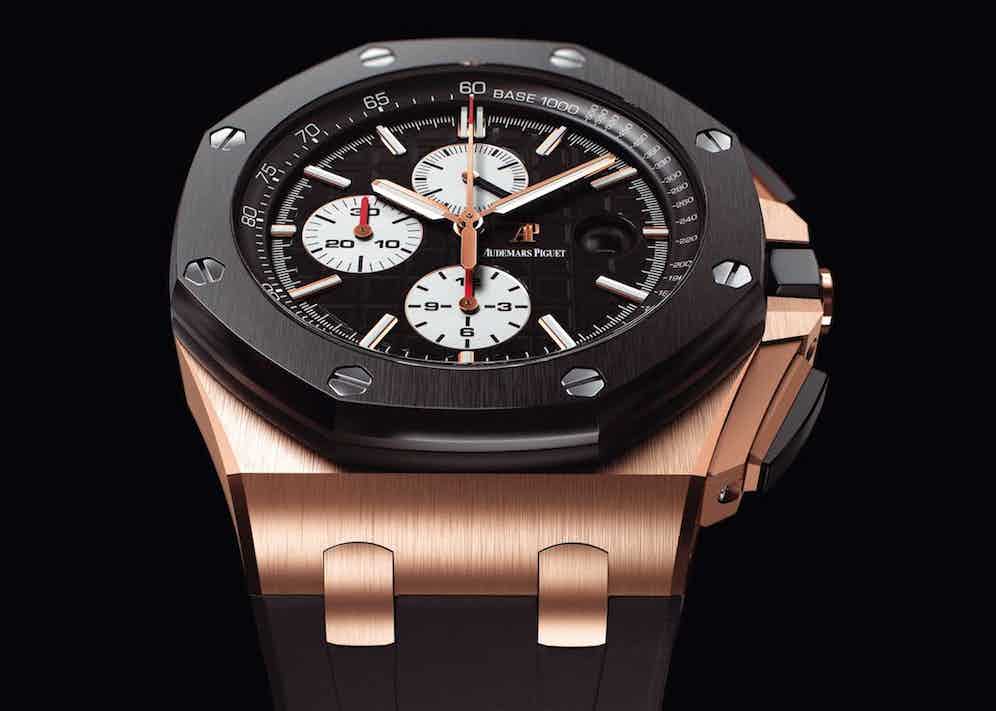 The Royal Oak Offshore has since its launch in 1993 become the single most dominant high luxury sports watch on the planet. Jay-Z and LeBron both have their own editions. Indeed, Jay-Z commemorated his “Audemars before all y’alls” on Frank Ocean’s ‘Biking’ as well as his own appropriately named track ‘Show You How’. NFL QB Michael Vick rocks his cool millie-costing Offshore encrusted with 7 carats of diamonds. Indeed there is nary a #shotcaller or #baller in Christendom in the last 20 years that has rolled up to the club and popped the cork on a jeroboam without an Offshore on his wrist. So much so that you can say that in the new millennium it has become simultaneously synonymous with success and street cred. But how did it rise to the top? 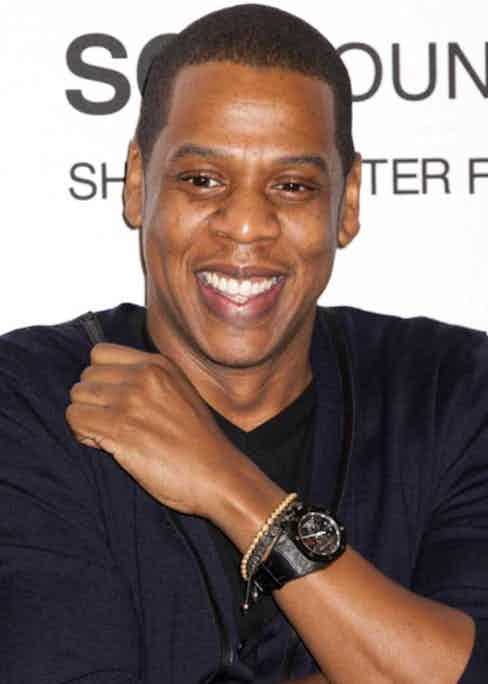 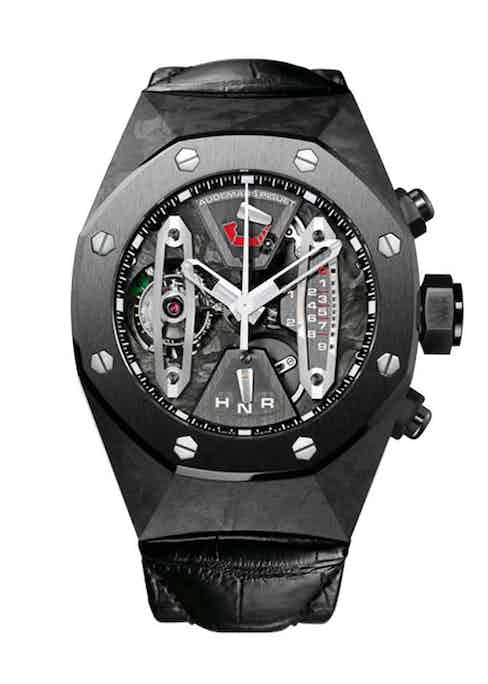 It is impossible to discuss the modern day icon that is the Royal Oak Offshore without first detailing the genesis of the original 1972 Royal Oak, famously created by designer Gerald Genta. There are two stories about how he came up with the idea of the unique eight-sided bezel and tripartite construction of this timepiece. The first was that he was inspired by the octagonal portholes of the HMS Royal Oak, the British Navy’s first armored vessel, and decided to base the bezel on this design. This was later corrected in Revolution magazine’s interview with AP CEO Francois Bennahmias who explained, “Mr Genta’s widow told me that Gerald was inspired by a diver he saw by the side of lake Geneva, specifically the way his diving helmet was screwed to his suit.”

Regardless of which story you connect with the Royal Oak’s eight-sided bezel and exposed screw design, it has become one of the most recognizable in modern luxury. Says Bennahmias, “The thing about the Royal Oak is it is unmistakable from across the room.” But underlying the aesthetics was a function — the construction of the Royal Oak case was such that both the screws and the bezel are integral elements to the case structure. The entire watch was sealed from the back using flat nuts that were attached to the screws that run through the case — like load-bearing pillars in a house. 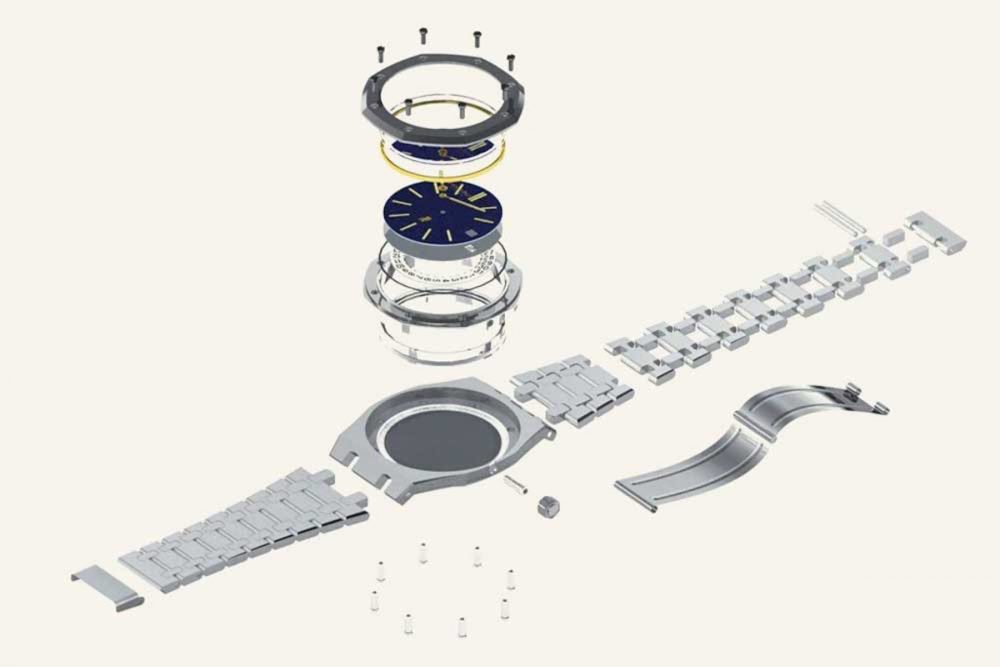 The Royal Oak’s eight-sided bezel and exposed screw design has become one of the most recognizable in modern luxury.

The Royal Oak ignited a revolution as the first super high luxury steel watch and at the time of its launch, its 3750 franc asking price could buy you 12 Rolex submariners. It was clearly meant for a specific type of customer. As former Audemars Piguet CEO Georges Henri Meylan explains: “The Royal Oak was intended to reach out to a new generation of (very rich) young watch buyers. 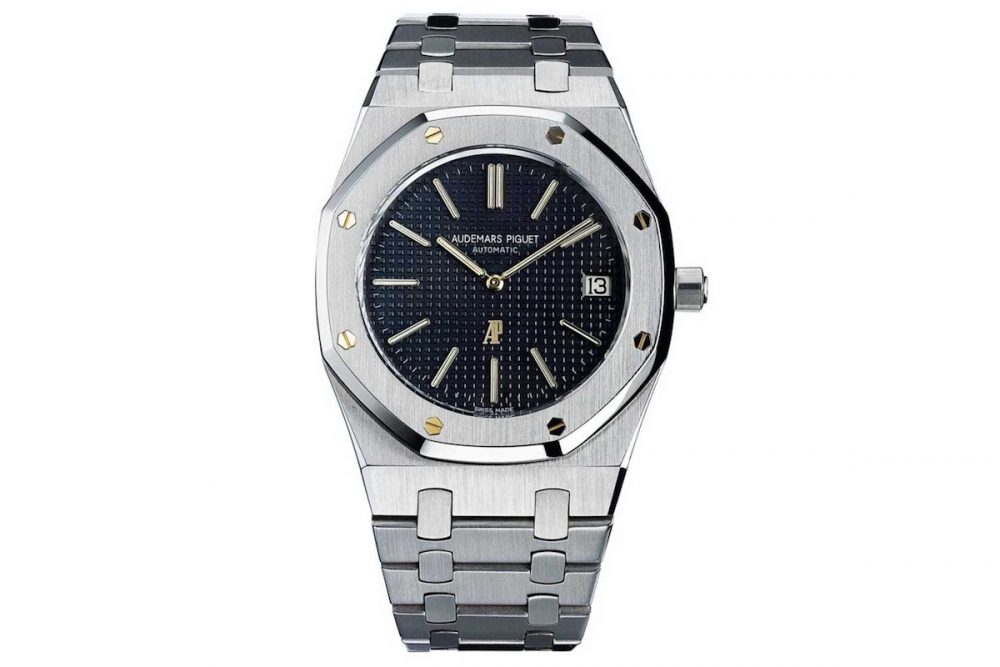 The idea of a massive oversized 42-mm in diameter Royal Oak-based watch was sparked in the mind of designer Emmanuel Gueit sometime in the mid-1980s. Working at Audemars Piguet’s design studio, he launched himself into this project with unbridled obsessive enthusiasm. What he created would be a first in luxury watches. At this time, Panerai’s 42-mm in diameter Luminor Marina had not yet been introduced to the market. Thus Gueit’s creation was the first truly oversized luxury timepiece. Even crazier were its exposed rubber gaskets and rubber-covered chronograph pushers, normally considered incompatible with a refined watch.

For its movement, Audemars Piguet selected two products from brands they had long associations with — Jaeger-LeCoultre (at the time Audemars Piguet still owned a large part of the Le Sentier manufacture) and the famous Vallée de Joux module maker, Dubois-Depraz. A nicely reworked Jaeger-LeCoultre automatic caliber and a Dubois Depraz module formed the chronograph movement for the Offshore. The signature magnifying loupe used to enlarge the recessed date of the Offshore results from the movement’s modular construction. Says Gueit, “The dial was really far from the date wheel. So I decided to use the loupe to magnify the date. It’s funny because this has become one of the visual signatures of the watch.” 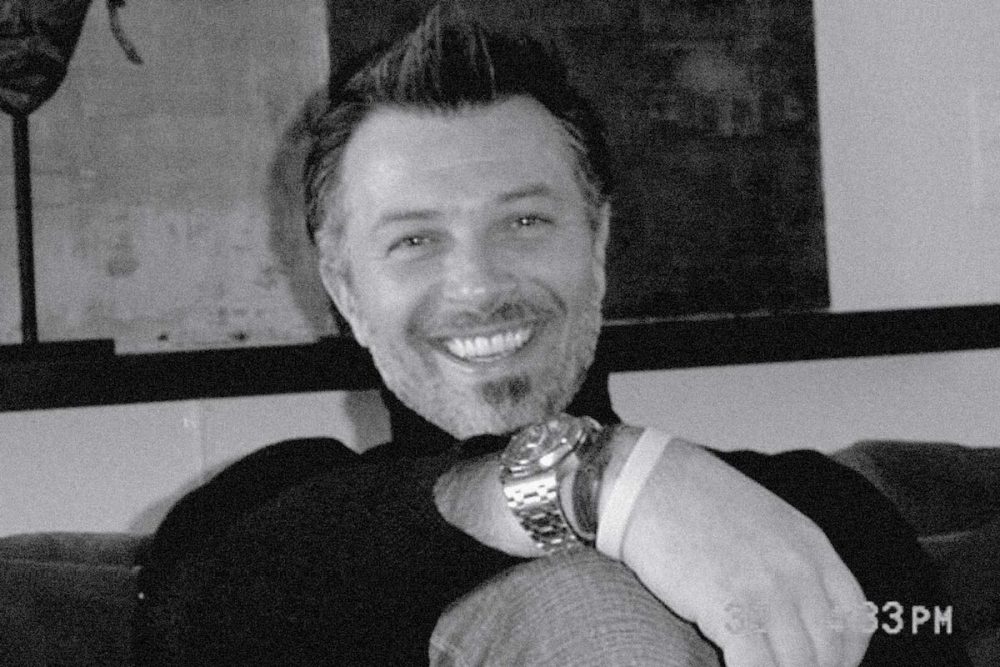 Yet one more problem existed: the disparity between a very large case and a small movement. The manufacture solved this with one of the best marketing tactics since the advent of their “steel on the outside, gold on the inside” campaign for the original Royal Oak. Every Offshore would feature an anti-magnetic inner case. Gueit explains: “The case was so big and the movement quite slim so we had to find a solution, which is why we decided to cover the movement with an anti-magnetic soft iron cage.” This creates a watch that is anything but slim. But the Offshore’s massive 15.5 mm stack height is part of its Herculean appeal. 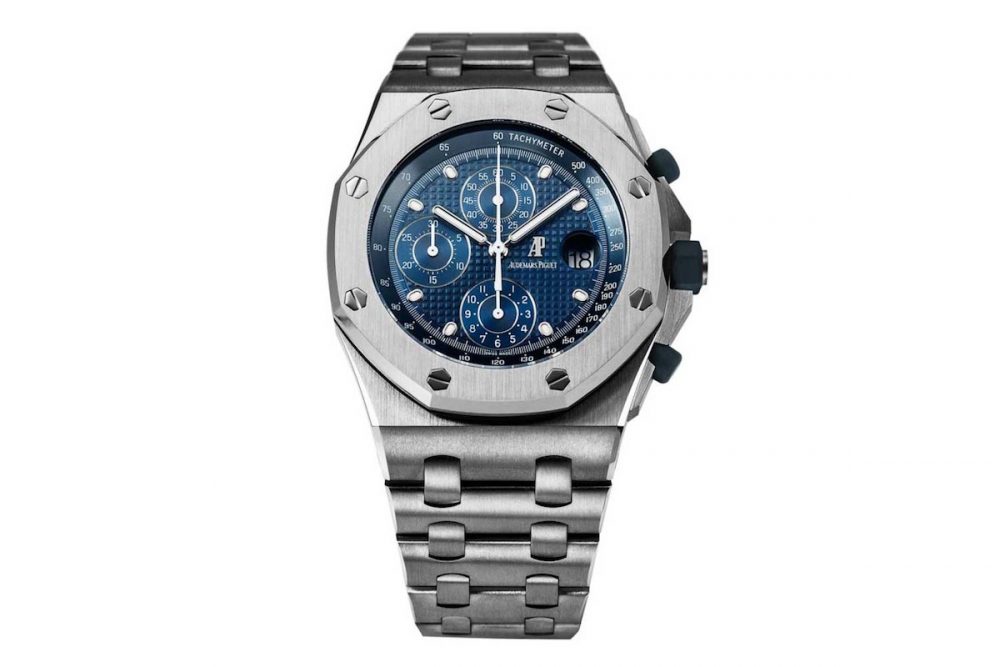 Gueit labored endless hours, making numerous prototypes until he had the opportunity to present his baby to the Audemars Piguet board. Their response was to recoil in collective horror, AP’s former CEO Georges Henri Meylanrecalls: “I remember looking at him and saying, ‘You’re crazy.’ “Gueit didn’t handle the rejection well. With fanatical zeal he tracked down board members in the hallways, boardrooms and even in the parking lot of the brand’s headquarters at Le Brassus as they climbed into their cars. Finally, they agreed to make a few watches to get Gueit off their back. And so after several years of delay, the world’s craziest, most audacious luxury timepiece, the Royal Oak Offshore was born in 1993 and soon exploded into the public consciousness.

Larger than Life: The Offshores Rise in Popularity

What was the reason for the Offshore’s success? Much of it came down to how totally original it was. Its hugeness was unique and totally audacious. At the time it would have been the rejection of all propriety for a member of the horological Holy Trinity to walk down this dark path. But at the same time there is a prevailing quality from finish to the touch of every surface on the watch that reinforced its authenticity as a true luxury product. It was part luxury watch and part superhero. And it soon became the preferred timepiece of two of pop culture’s most iconic figures. The first was Austrian body-builder-turned action star Arnold Schwarzenegger. And as you know, the single greatest rapper of all time, Jay-Z. And while Schwarzenegger wore special editions of the Offshore in films like End of Days and Terminator 3, Jay-Z turned the likes of Kanye West and Pharrell onto his favorite timepiece and soon the entire rap world was flossing with AP ROO’s on their arms. At the same time, the Offshore appeared on the wrist of Ari Gold and Vinnie Chase on HBO’s Entourage. And collectively this pop culture triple tap ignited an explosion in popularity for the watch. 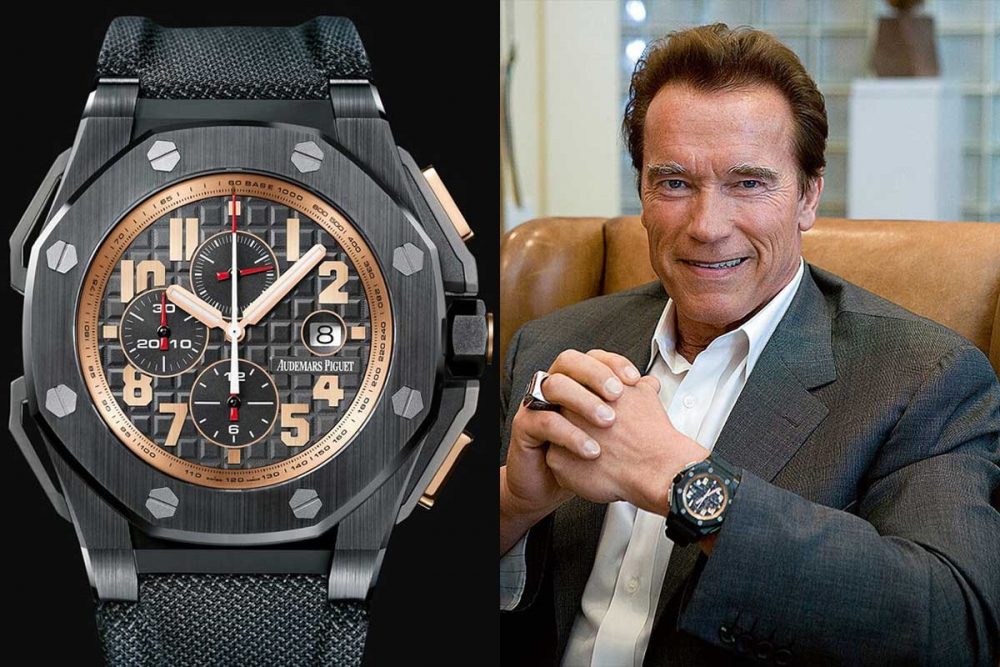 Audemars Piguet has had several special editions inspired by actor Arnold Schwarzenegger, who is one of the biggest patrons of the Royal Oak Offshore.

Over the past 28 years one of the magical qualities of the Offshore is its ability to keep evolving and stay ahead of the curve. Each new version of the Offshore sets the trend for the current generation of sports watches. Case in point was the famous End of Days, the first blacked-out high luxury watch the world had ever seen. And while the eponymous movie tanked at the box office, the watch soon reached cult mythological status trading for many times its asking price. This was followed by the famous Rubber Clad Offshore. By coating the huge bezel in rubber, Audemars Piguet protected this vulnerable unit against scratches. Its rubber strap merged organically with the rubberized pushers and crown, and turned a classic design into a uniquely modern sports chronograph. 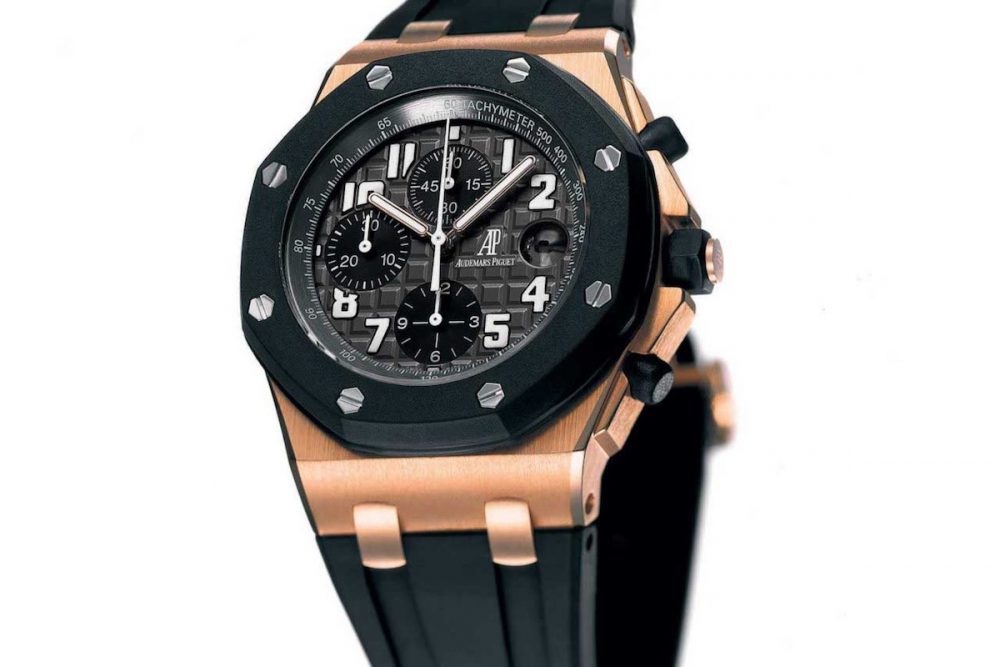 AP scored another major hit with the rose gold rubber clad version of the Offshore in 2003. Says Bennahmias, “When the distributor in Italy saw this watch, he said, ‘Come on, rose gold and rubber? You’ll sell 100 pieces worldwide maybe.’ Contrary to the distributor’s feedback, within a few days, the demand for the watch was so strong, he needed 100 pieces for Italy alone.” What’s particularly cool about this watch was revealed when a Japanese owner had an accident wearing his is that under the rubber coating on the gold watch, the bezel is still a solid piece of gold. Says Bennahmias, “Of course it is. We are AP. If you pay for a gold watch. You’re going to get a gold watch even on the parts you can’t see.” 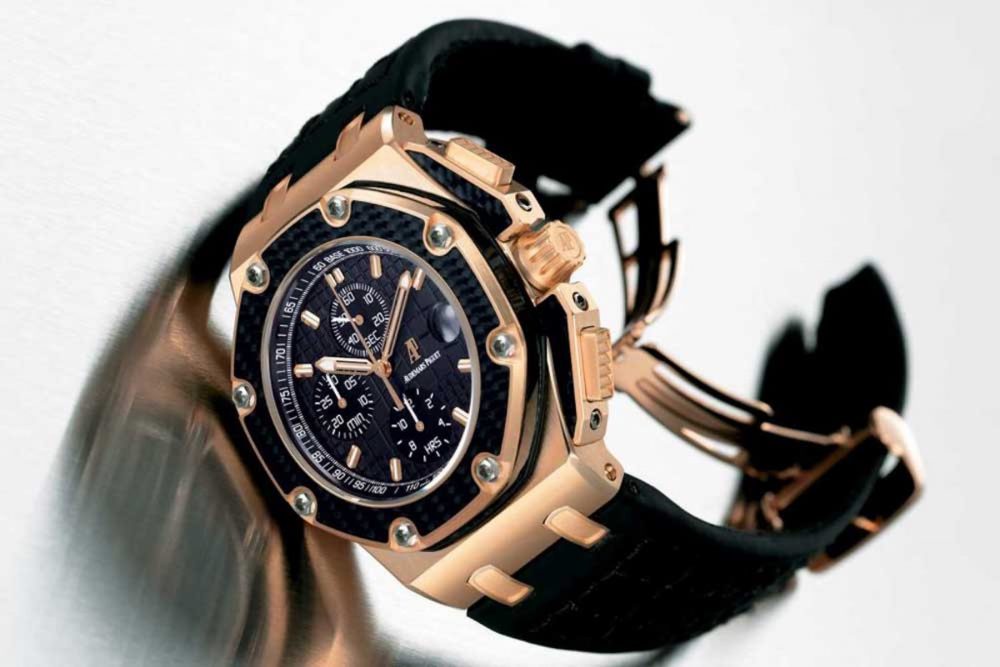 The Offshore also perfectly showcased AP’s increasingly emboldened design braggadocio. Unique editions of the Offshore for F-1 drivers, the carbon fiber festooned Juan Pablo Montoya and the race car derived Rubens Barrichello are some of the most stunning modern watches created and still command massive premiums on the aftermarket.

Over the past 28 years the Offshore has also been a platform for Audemars Piguet’s passion for material innovation. Pioneering the technology for carbon fiber cases, the first luxury timepiece featuring a forged carbon fiber case was the legendary Alinghi Team Offshore made for the Swiss America’s Cup team. AP then followed the success of this ultra light model with what we at Revolution consider the most undervalued and coolest Offshores of all time, the Bumblebee. This extraordinary watch featured a carbon case combined with a totally scratch proof ceramic bezel and bold yellow and black styling that endowed it with its nickname.

Launched before the prevailing fashion for oversized watches, Bennahmias admits that AP didn’t expect to sell more than a few hundred Offshores before he ended production. Nearly three decades later, the Royal Oak Offshore is the most sought-after luxury sports watch on the market. Says Bennahmias “We are usually out of stock in most of the classic models. If you want an Offshore, you put your deposit down, and then you wait and wait. Until they say your watch has arrived. Our volume is small because this is what we can produce to the level of quality we require.”

Amusingly for the 25th anniversary of the Offshore in 2018, AP launched a limited edition of the watch that was identical to the very original watch that Gueit designed 25 years ago and set into motion the greatest revolution in luxury sports watch the world had ever seen. Apt demonstration that the Offshore in every version is here to stay. 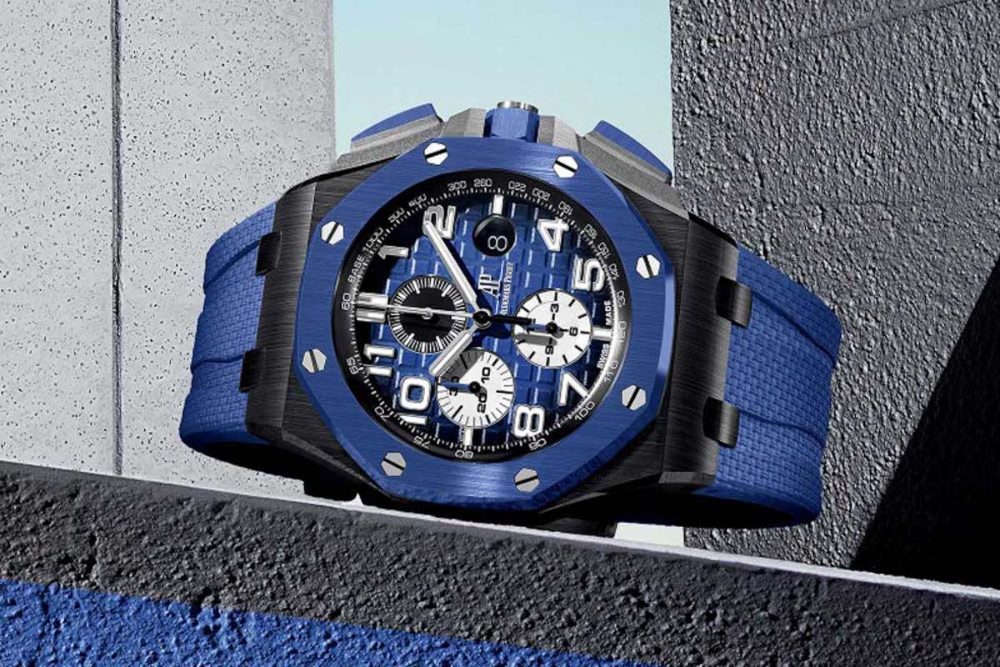 Last year, Audemars Piguet introduced three new Offshore Selfwinding Chronos in multicoloured ceramic—green, blue, and a combination of 18k pink gold over smoked gray. Powered by the Cal. 3126/3840 automatic chronograph caliber, which offers 50 hours of power reserve and runs at AP’s standard rate of 21,600 vph, or 3 Hz, these 44mm models have large, legible numerals instead of the typical applied hour markers seen in the previous offerings. One look at the sporty chic line-up would convince you that this watch ain’t getting out of style ever! 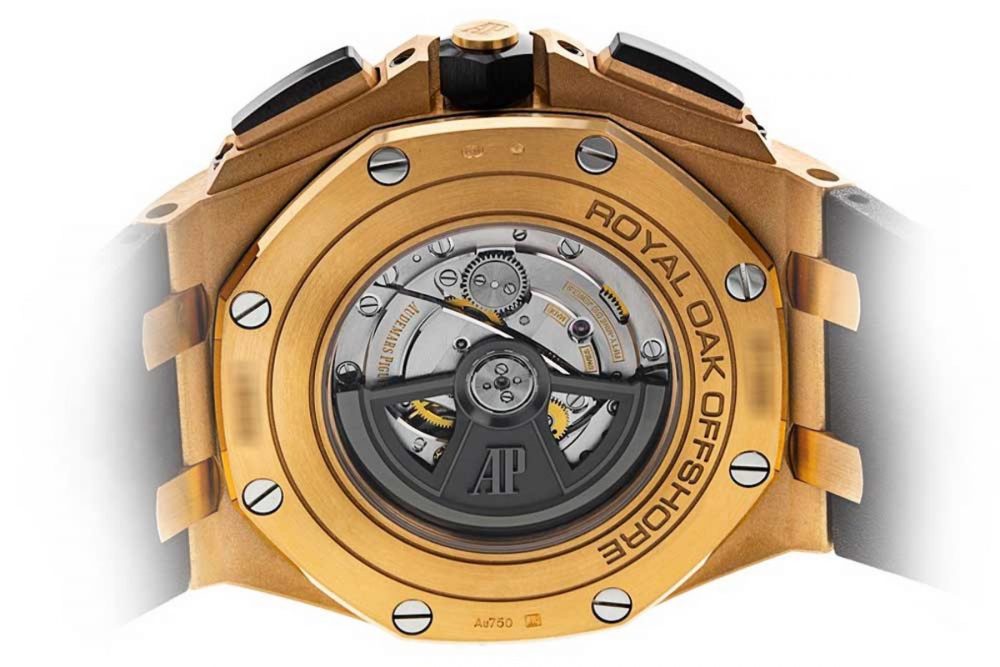 There are many collectible versions of the Royal Oak Offshore but the one we have just added to our shop is arguably the best looking amongst them all. It is not over the top in its design and is equipped with the calibre 3126/3840 automatic movement that promises 60 hours of power reserve. The 44 mm watch in 18k pink gold comes with a ceramic bezel with brushed tops and polished sides. Apart from the bezel, the thin rectangular chronograph pushers as well as the crown are made of ceramic with hints of metal elements that make the watch look pretty sleek. The hand decorated movement with the 22k gold rotor and a dark galvanic treatment can be appreciated from the sapphire crystal caseback. The watch has a 24-month warranty and is offered with a complete set of box and papers. 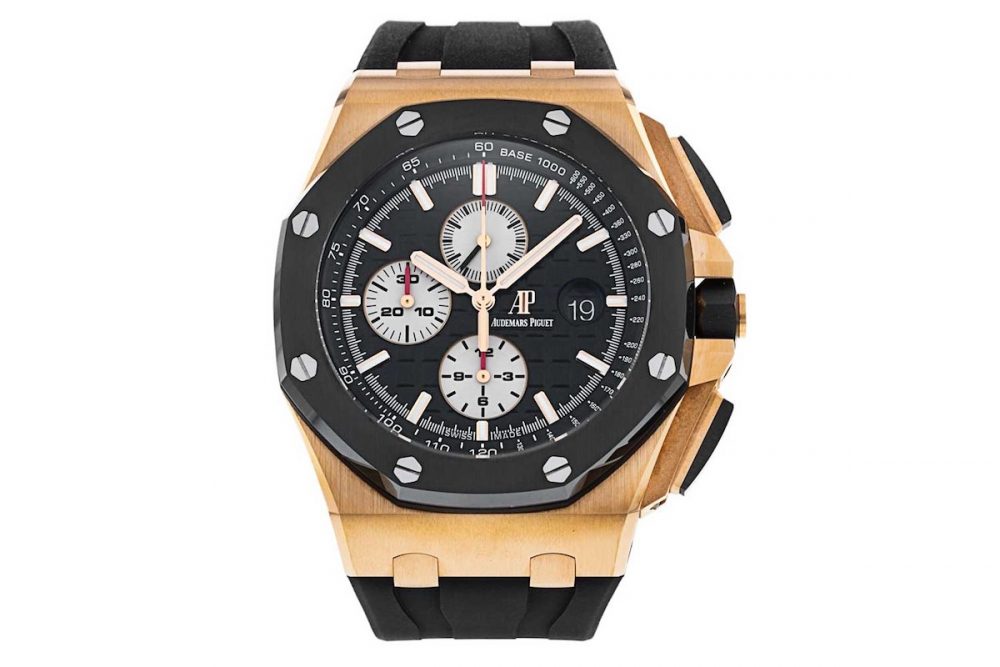