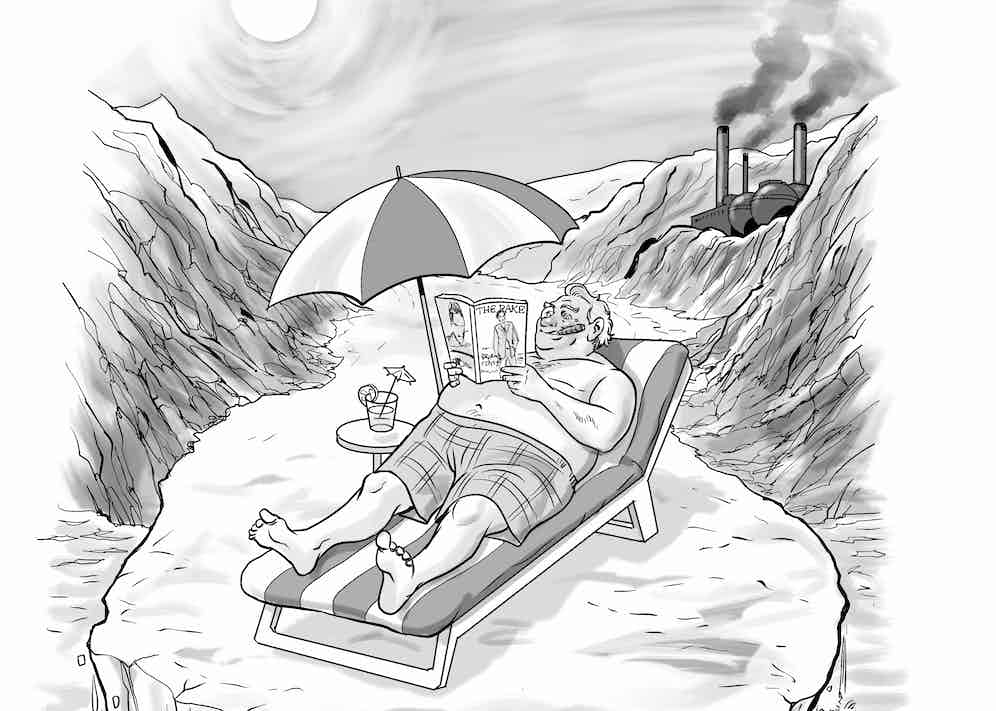 When it comes to the anthropogenic climate change debate, the Cassandras are trouncing the naysayers. Planet Earth has never, in recorded history, had a hotter summer than 2015, and when an Intergovernmental Panel on Climate Change (IPCC) report states with 95 per cent confidence that CO2-belching, wagyu-munching, forest- felling homo sapiens are the main cause, it’s hard to ignore them, especially when alternative explanations (cyclical differences in solar activity and the like) have repeatedly involved what might euphemistically be called ‘funding’ from the energy industry.

Often, the best way to decide the worthy winner in a binary debate is to examine the underlying motive each party has for making their particular case. Why do the deniers deny? ‘Because the wealthy and powerful will do anything to retain their wealth and power,’ say climate change campaigners. Why do proponents propound? ‘Because they’re jealous, kaftan-wearing hippies!’ say the sceptics. It isn’t a fair fight. Apart from anything else, far from being soap-dodging extremists whose idea of entrepreneurship is peddling biodegradable Styrofoam manufactured from human breast milk, the vast majority of these so-called ‘liberal conspiracists’ are sensibly dressed and grateful beneficiaries of a market-forces economy. Dreadlocked vegans in Che Guevara T-shirts don’t tend to persuade western governments to even pretend to heed their prophesies of doom.

And yet the thing is, even though the green lobby has almost certainly won the argument, the climate change movement becomes easier by the day to shrug off in favour of the rampant consumerism against which it rallies. Why is this? Perhaps it’s partly to do with the tokenistic impotence of the measures we’re encouraged to take against climate change. As long as nations keep pledging to make meagre emissions cuts with their fingers crossed behind their backs, recycling will feel like flicking beads of sweat at the sun. With the world industrialising faster than a steroid-soaked beehive, it’s pretty hard to get me motivated to build a worm farm, clean my sink with vinegar or use light bulbs whose electromagnetic pulses have barely the temerity to penetrate glass. At least dramatic geo-engineering propositions such as stratospheric aerosols have the redeeming feature of being audaciously bat-shit.

Meanwhile, some of the climate change lobby’s woefully trite vernacular is enough to make one want to sponsor an Amazonian logger this Christmas. ‘Save the planet’ is surely the most fatuous blob of aphoristic syrup ever to be dribbled down the chins of the semi-informed in pursuit of self-absolution. The planet does not need saving. The great orb of plenty we call home got by for 4.6 billion years without us, and will live on in rude health until Supernova Sunday, just as long as it can shake off its current bout of anthropus-itis.

Then there’s the green camp’s woeful choice of messengers. I’ll take finger-wagging, CO2-reducing advice from a man who was cheated out of the U.S. presidency on the chin, but being lectured by any private-jetted celeb with a carbon footprint the size of a charred yeti is another matter. If there’s one thing likely to repress, rather than raise, my environmental awareness, it’s a stadium event that prompts the mass transit of thousands of burger-munching, soda-swilling humans. (Remember Live Earth in 2008? Sponsored by Chevrolet, its carbon footprint was around 74,500 tonnes.)

"Remember Live Earth in 2008? Sponsored by Chevrolet, its carbon footprint was around 74,500 tonnes."

It seems increasingly likely that climate change is inevitable — something Benjamin Franklin would have added to his ‘death and taxes’ quip, were the great American polymath alive in 2016. The flimsy pledges, grandstand posturing and petty, conscience- salving attempts to reverse it feel like the equivalent of urinating at a towering inferno. By definition, anthropogenic climate change has been accelerated by human population growth, and there aren’t going to be fewer of us any time soon. It took about 200 millennia, up to 1804, for there to be a billion humans, but just 40 years after 1950 for us to double our numbers from 2.5 billion to five billion. We now number 7.4 billion, and the United Nations reckons we’re looking at 9.6 billion by the middle of the century. Why Catholics who continue to admonish contraception aren’t getting a kick up the cassock from the green lobby for stretching long-redundant nuggets of scripture (like they were cheap prophylactics) into the modern age is anyone’s guess — ‘No, yougo forth and multiply’ — but that’s another matter.

As humans proliferate, and greater reaches of the world become industrialised (enriching human lives in the process, it must be pointed out), it becomes more clear that even decelerating climate change would mean slamming the brakes on economic growth (and therefore personal freedoms) so sharply that no developed nation’s government will ever sanction it beyond mealy mouthed pronouncements and token gestures. And what about developing nations? Why in the name of Bono’s balls should they rein in their behaviour? How can we possibly deny developing nations the spoils of growth that will bring masses of people out of penury? ‘Hey, welcome to the shindig, Brazil, China and India — but the D.J.’s wrapping up and the free bar’s closed.’ Even the most fervent ecological warrior cannot deny that climate change is synonymous with human progress, and therefore provision.

The debate is becoming unseemly, as typified by the derisory epithets each camp has come up with for the other (‘alarmists’ versus ‘deniers’). So isn’t it time we stop bleating, bitching, halo-rubbing, finger-wagging, denying, defying and palm-greasing, and accept what’s coming to us? Should we not devote our efforts and energies, instead, to tackling the problems climate change will cause? It’s churlish, surely, to at least not acknowledge the benefits of the consumption that nudges the mercury northward. With the information revolution still moving up the gears, and looking set to dwarf the industrial revolution in terms of impact on human progress, we’re entering a new age of human ingenuity. Within a couple of decades, the fact that we still have humans piloting passenger jets will seem quaintly anachronistic. Elon Musk can now talk to rooms full of elbow-patched geophysicists about human settlement on Mars and draw applause rather than be apprehended by security. Vast strides in Artificial Intelligence, open data and real-time analytics are set to offer plausible answers to the question of how to transport, feed, house and provide energy infrastructures for the world’s burgeoning population. Should we not devote this incredible guile to tackling consequences such as rising seas, extreme weather events, natural disasters, violence over resources and the depletion of species?

Or, of course, we could just let these horrific global events become a huge blot on the collective human conscience while we’re busy bickering. That said, if the collective will to implement the above just isn’t there, and if my presence on this planet nudges us a nanosecond nearer to all-out Armageddon and a new dawn for Planet Earth — including, perhaps, an explosion of biodiversity in a few millennia’s time that enables it to be governed by less destructive and perhaps sexier, better dressed inhabitants than the current leaseholders — well, I’m afraid I can live with that.