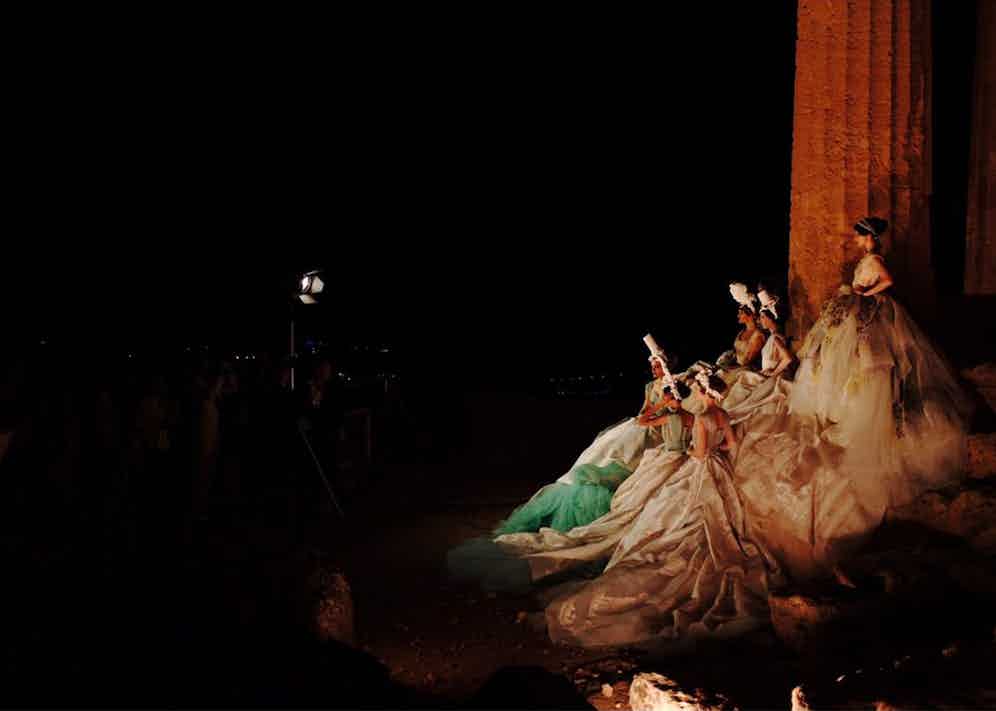 Being an haute couture client, or in other words, taking your place at the table of the top 1% of the top 1%, affords you certain unique privileges when it comes to shopping for clothes, chief among them the guarantee that nobody else will ever have the same item as you. But when you're a Dolce & Gabbana haute couture client, you're given the world, or at least - as evidenced by the Italian duo's most recent Alta Moda extravaganza in Sicily - the last 3000 years of it, wrapped up in a Grecian odyssey of lavishly handmade dresses, unbelievably ornate suiting and jewellery outrageous enough to have Elizabeth Taylor rising from the grave.

Last month, amid Greek gods, ancient manuscripts, a literary deity and ancient temples, Dolce & Gabbana once again brought its 4-day Alta Moda celebration to the designers' spiritual home of Sicily, where seven years ago they first pulled back the curtains of fashion's most exuberant theatre in the chic resort town of Taormina. This time, the opening night took stage in Palma di Montechiaro, chosen because it was the birthplace and seat of Giuseppe Tomasi di Lampedusa, author of The Leopard (Il Gattopardo),surely one of the most widely read pieces of Italian fiction ever written. The novel was published posthumously in 1958, less than a year after Lampedusa's death. The book is a meditation on the decline of the Sicilian aristocracy and the rise of a new order, played out in Italy's eventual reunification, otherwise known as the Risorgimento.On this day however, it was an entirely different elite basking in Sicily's glorious riches, as one choir serenaded the 400+ private clients from the steps of a monastery while another sung mellifluous notes from a terrazzo overlooking the piazza as hundreds of townsfolk lined the streets three and four deep, eager to get a picture of the guests arriving in limousines. For many of them, Stefano Gabbana and Domenico Dolce are seen as saints of a sort, having spent a great deal of time and capital renovating the town and bringing it back to former forgotten glories. 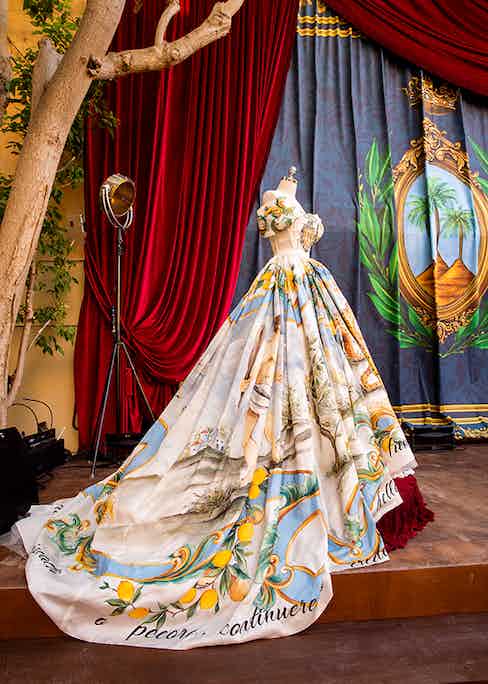 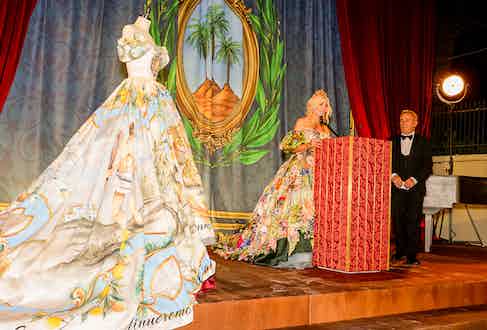 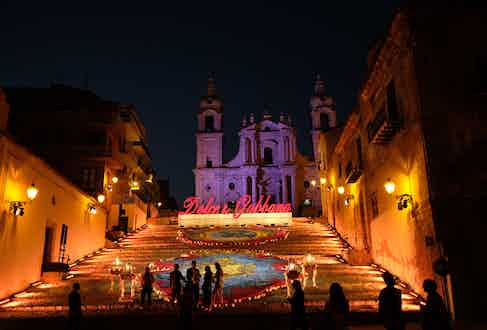 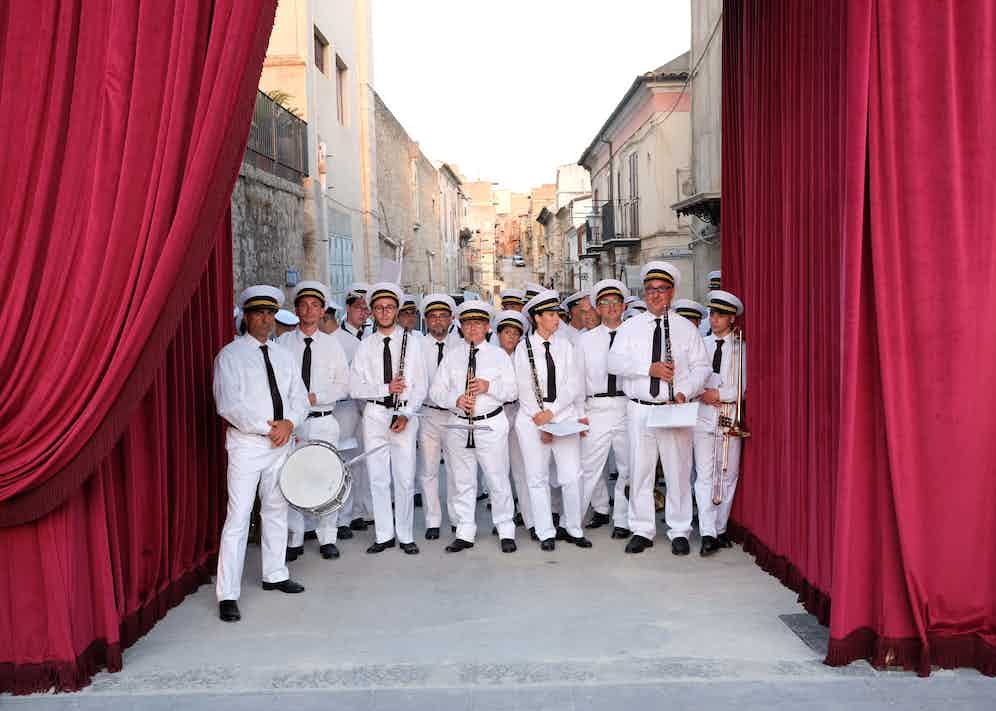 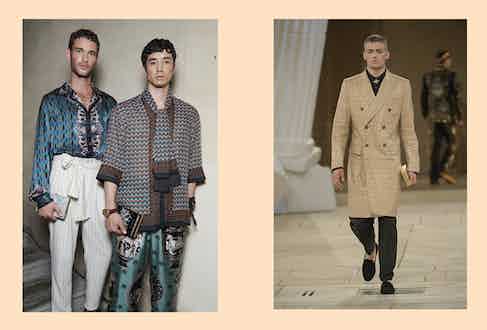 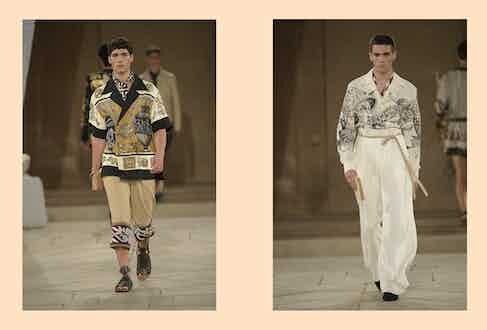 As guests milled in the piazza, a marching brass band struck up a resounding tune, leading a procession through the cobbled streets, over which balconies full of smiling women and children tossed handfuls of rose petals, until finally they came to an incredible second piazza, decorated with the most magnificent ancient fig trees and a public balcony with a ludicrously broad view of the Mediterranean. Dotted among the flora and fauna were the duo's Alta Gioielleria collection (having seen the word a thousand times, it becomes no easier to spell), which guests could try on and buy in private tents. Us normal folk were shown the way into Palazzo Ducale, where Lampedusa was born, and where the significance of his novel, The Leopard, became immediately apparent. Called onto the stage by the town’s mayor, Stefano Castellino, was one Sylvia Mantella, a Toronto-based philanthropist-zookeeper (and married to Robert Mantella, the Canadian real estate mogul), one of Dolce & Gabbana's most visible haute couture clients, who in 2017 purchased an incredible gown from the Palermo show hand-painted with two leopards. Tonight, she was donating it to Palazzo Valguarnera-Gangi, which was the location of a good deal of Visconti’s movie adaptation of Il Gattopardo.

And so that was the curtain-raiser, but what of the subsequent shows? Being The Rake, I might normally omit any reporting of womenswear shows, but I feel that as an audience of discernible menswear buyers, it would be remiss of me to skip over what was one of the most brilliantly sensual theatrical shows I've ever seen, set as it was in Agrigento's Valley of the Temples, considered by archeologists as the most complete architectural relics of ancient Greek society outside of the Parthenon. To use such an important historical construction as the setting for a fashion show was not easy - in fact, negotiations took all of two years and a number of complex and elaborate preparations had to be made in order to preserve the delicate integrity of the temple and the ground it stood on. When the crowd had navigated its way past an all-woman orchestra dressed as Vestal Virgins and the show eventually started, models appeared from behind the ancient columns and strode down the steps, their intricately embellished and heavily embroidered garments immediately evoking the myths of classicism, which have continued to fascinate poets, painters and sculptors for centuries now. The clothes presented in the Valley of the Temples were inspired by the beauty of female divinities, both Greek and Roman, and as the sun came down over Agrigento and the shadows began to lengthen, one couldn't help but be moved by the crescendo of artistic craftsmanship on show. 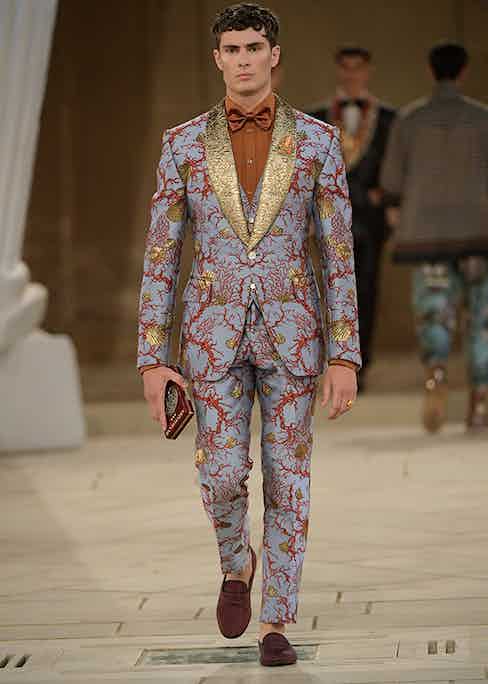 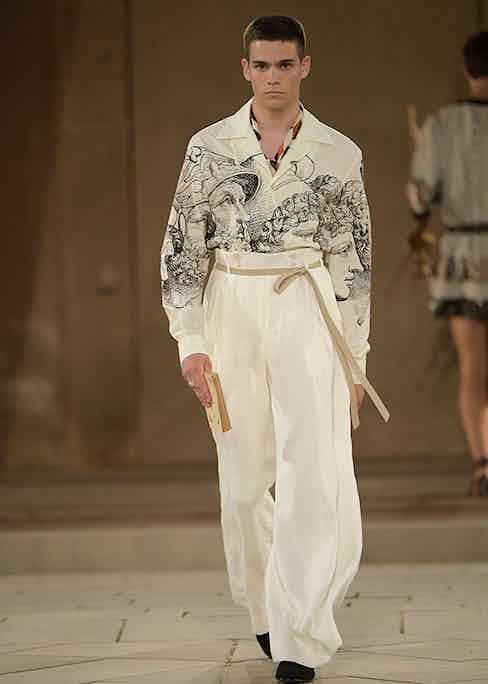 As the final model disappeared into the temple and Stefano And Domenico took their bow, the audience spilled onto the runway to personally congratulate the pair. In previous years, this would then be followed by a buying opportunity, with the models quickly de-robed and the looks taken to a nearby showroom. Not this time, however, given the sacred surroundings and how, in recent seasons, the post-show buying blitz had become something of a bun fight.

The mens' show the following evening lacked the romantic intensity of the evening before (which I don't think will ever be topped) but it was nonetheless epic in every sense of the word. Once more the myths of ancient Greece provided ample source of inspiration for the Alta Sartoria garments that were presented in a crumbling courtyard of the town hall of Sciacca, replete with gargantuan plaster of Paris sculptures of heroic Greek figures. Speaking to a handful of journalists before the show, Stefano and Domenico described how the myths of Zeus, Apollo, Dionysus, Poseidon and Ares represented and reproduced in a long canon of artistic masterpieces formed the catalyst to a collection that had everything from literal interpretations of ancient sartorialism to the most delicately embroidered suiting, leatherwork and application of crocodile skin. Speaking to a client after the show, I learned that there was a WhatsApp group available only to the buyers, allowing them to make their claim to any of the 130 looks as they saw them. Chief among my picks were a number of stunning silk shirts printed with classic Grecian motifs, often paired with very wearable wide-legged trousers, together with the suiting, much of it double-breasted and lavishly embroidered. A few of the suits came embellished with real coral in a hat tip to Sciacca's long tradition of coral jewellery craft, while certain gowns - perhaps the most striking pieces of all - provided a canvas for hand-painted reproductions of classic paintings such as Jean Baptiste Leloir’s 1841 painting of Homer.

For those private clients in attendance, it was a case of gods observing gods, with clothing the conduit upon which flowed 3000 years of art history, and money the manna from the heavens. Empires are not permanent however, a fact not lost on Dolce & Gabbana who have experienced their fair share of ups and downs. As I write this, I'm reminded of a moment on the first night after dinner, when gazing out over the fig trees from a terrazzo, Domenico stepped onto the balcony with some guests and pointed to the piazza below. "Beauty is truth, and we are all looking for it." Some have the means to purchase it, some have the desire create it, and others, like me, are simply content regarding it. 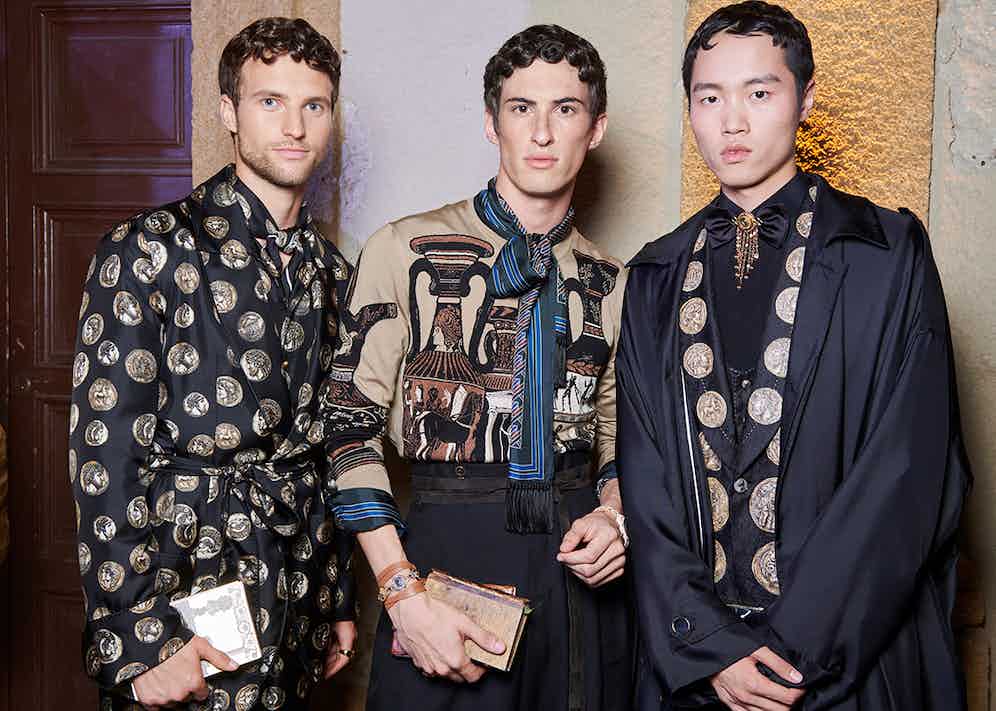 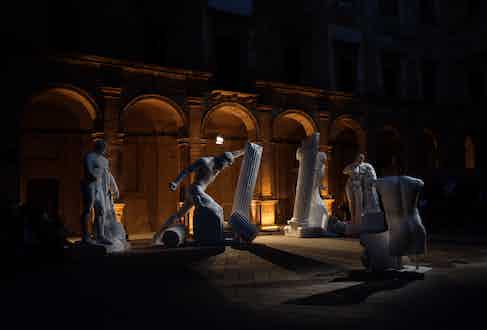 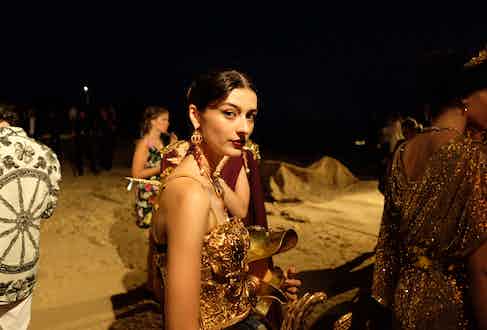 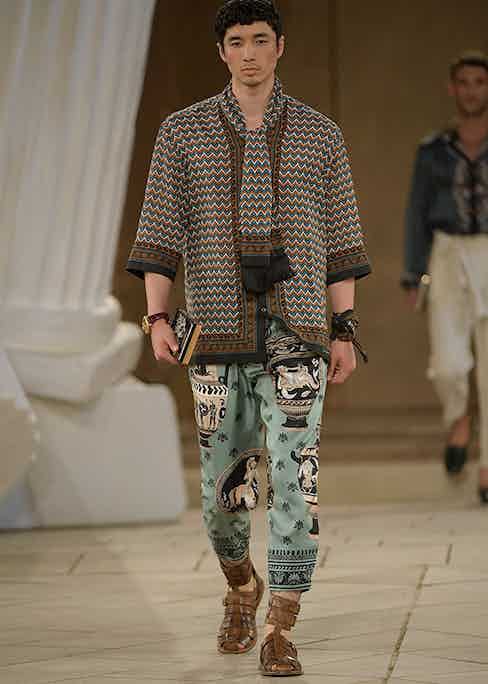 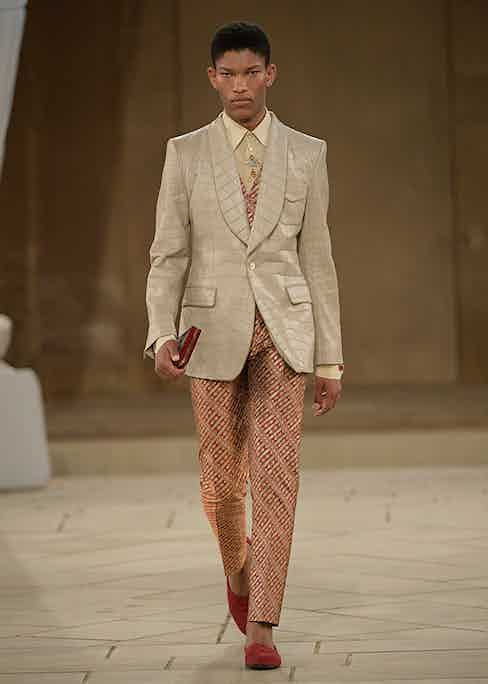