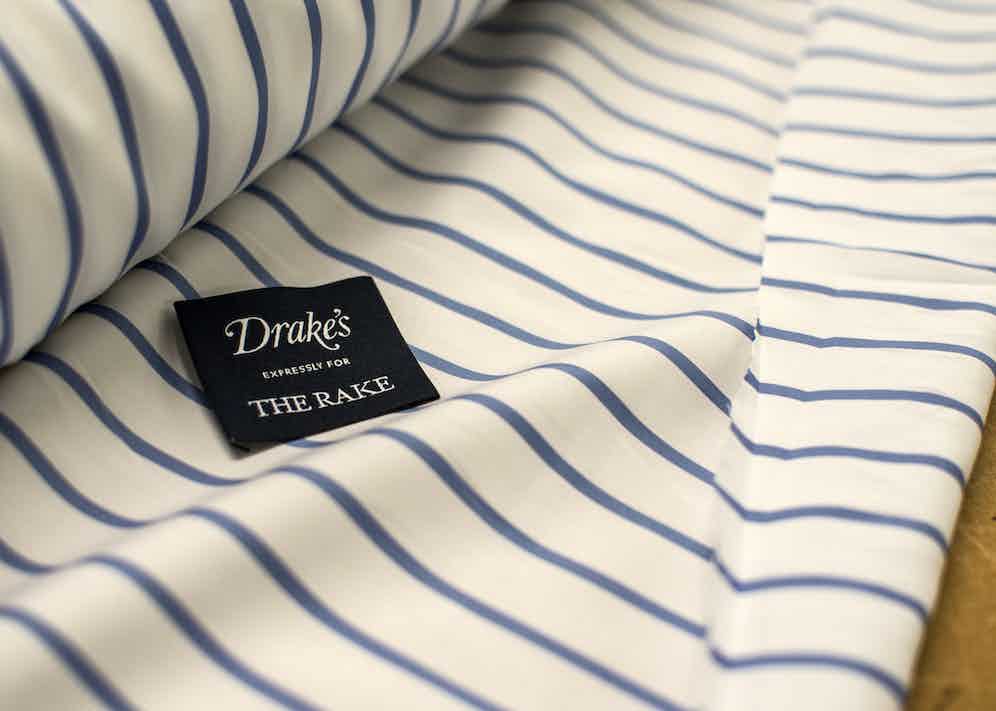 The former Mill town of Chard, in deepest Somerset, borders the ancient Fosse Way, one of the great Roman Roads of Britain, and lies within an area of outstanding natural beauty. Characterised by colourfully-contoured landscapes far removed from the pragmatic dash of modern life: meandering country lanes lined with lavish stately homes and warm hamstone cottages; chocolate box hamlets perched upon gently undulating hills which bring to mind the rural Wessex of Thomas Hardy’s times: a golden epoch that existed just before the advent of the railways and the agricultural and industrial revolutions that would change the English countryside indefinitely.

I must confess to performing a double-take as I first approached the town. It’s as far from the madding crowd as you’d expect and an air of somnolence still presides. The town’s claim to fame as the ‘Birthplace of powered flight’ is proudly celebrated on its welcome sign - in big bold letters, against a cyan and yellow backdrop featuring a Da Vinci-esque illustration. I could have sworn the Wright Brothers had laid claim to this feat. Turns out Chard’s most famous son, a certain John Stringfellow, predated the Magnificent Men by half a century - although sadly his steam-powered monoplane only ever made it 10-feet high but history had, nonetheless, been made.

But I’m not here to give you a history lesson on aviation. Instead, I’m heading towards the premises of Rayner and Sturges on an industrial estate close to the centre of town. A plinth, mounted to the exterior wall of this state of the art facility, proudly records the occasion in 1998 when The Princess Royal, no less, rocked up to cut the silk ribbon at its official opening. For those not yet privy, this is where Drake’s, whose reputation continues to soar, ply their shirtmaking prowess. What the premises lacks in aesthetic heritage from the outside, it more than makes up for inside - for a dyed in the wool menswear romantic like me anyway: the building boasts a factory floor that’s more befitting of its purpose, alive with the whirr of sewing machines - the very finest Singer’s, Brother’s and Pfaff’s chattering away incessantly. There’s an extensive rail of sample shirts running along one wall, juxtaposed by successions of looped cables, some linking the sewing machines at the front, others trailing in the wake of the electric fabric cutters - often slicing through patterns of fabric numerous layers deep. Machines with blades so dangerously razor sharp that chainmail gloves are a prerequisite, lending a rather Tolkien-esque quality to their operator’s daily armoury. The back wall is awash with fabrics from the upper echelons of textile manufacture. A collective mass of elliptical vaults which, when viewed face on, is rather like having hundreds of pairs of multicoloured binoculars staring back at you. 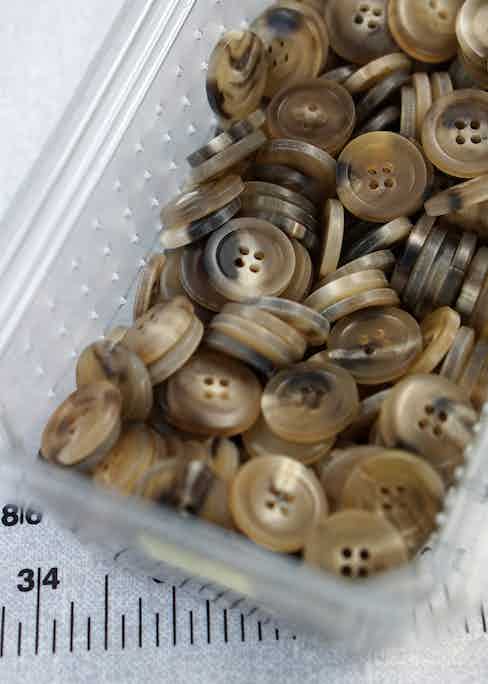 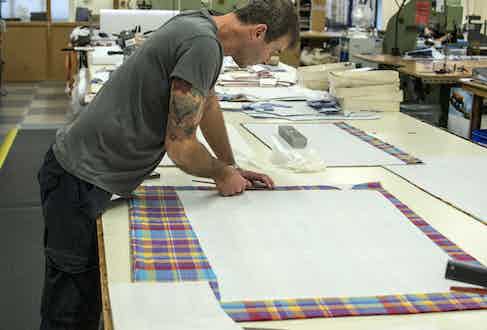 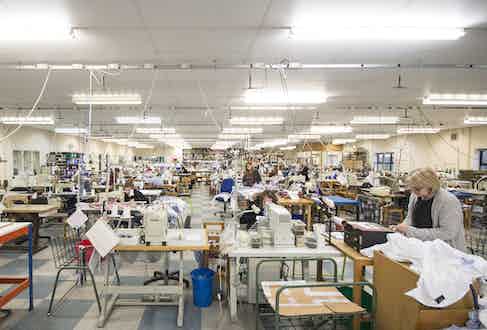 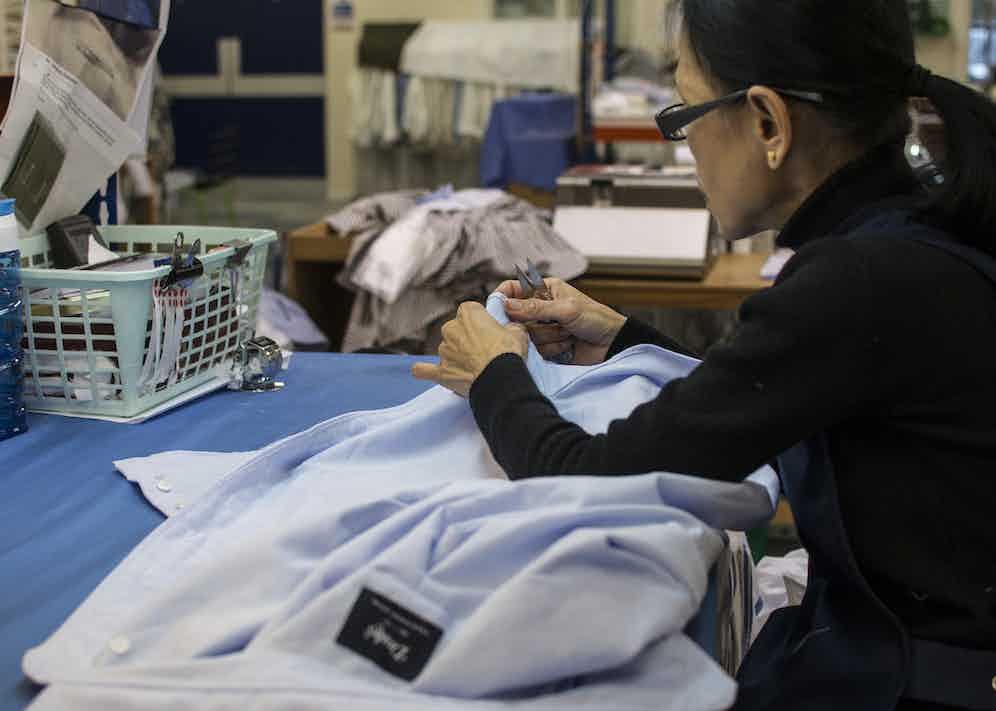 Rayner and Sturges is the only remaining producer of Made in England shirts, a company that’s made for the likes of Ede & Ravenscroft and Crombie in days gone by. I’m keen to quiz Drake’s Creative Director Michael Hill, how it came to be that Drake’s bought a shirt factory in a rather remote part of south-west England? “We'd had the idea for a while to develop our own shirts, as it felt like the next logical step from making ties.” What good is a beautiful tie without a beautiful shirt to wear it with, after all? “We had never seen the tie as a product in isolation, so I'd been visiting shirt factories around the country - sadly there are now precious few left - in order to find what I thought was the best place. Initially, we looked to Italy to make the shirts, but in the end, it felt like the perfect symbiotic partnership. The factory we found in Chard was the original Cleeve of London factory, so we knew it had the ability to make beautiful shirts. Then in 2013 it went up for sale, and it seemed like fate!”

It wasn’t something the company always had in mind, “but” says Hill, “we'd reached a point where we wanted to do our own shirts, but in a way taking on the factory was a happy accident. The business was originally founded more than a century ago, so it's very rewarding to think that we're continuing this grand story.

“How important is it to Drake’s to have a UK-based shirting factory” I ask? “Our factory is generally considered the last independent shirt factory in England, so that's hugely important to us”, interjects Hill. “It’s great to be preserving and investing in British craft, also having our own local facility allows us to make the right product and gives us control. It’s hugely practical. We can be inside the factory ourselves, trying things, developing the product.” 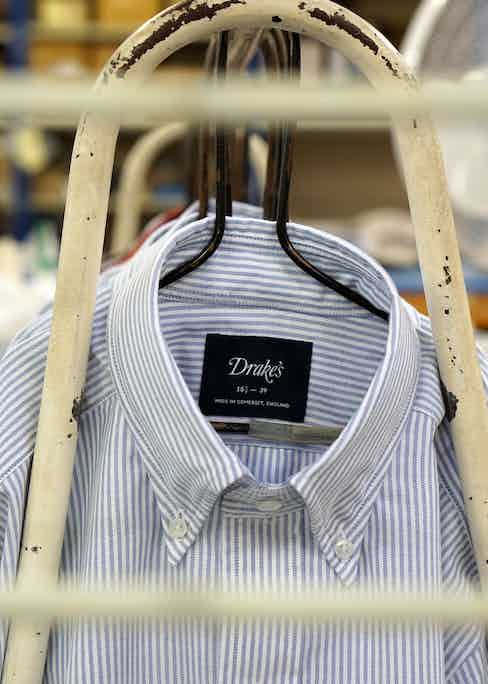 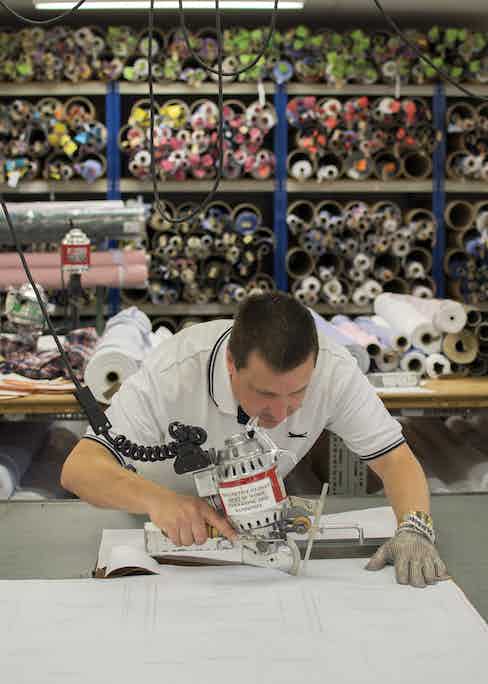 “We're lucky to have a wonderful team working here, making a great product”. Drake’s employs a dedicated team of around 38 full-time members of staff, drawn from the surrounding villages in Somerset, many of whom were born within a few miles of the factory. The team, headed by supervisor Lis Aston, herself 42-years in the shirt making business, features a cast of loyal hard-working characters such as Darren Bagg, who’s been cutting shirts for 26 years having started out as a trainee pyjama cutter for Bonsoir of London. The factory sadly closed its door so Bagg headed south to cut shirts in Somerset. Before he got into the industry he admits to having no idea about how many separate components were needed to make up a shirt: “There are 18 pieces to each shirt to be exact - it gives you a real appreciation for the garments we wear in our everyday lives.” Bagg talks me through the process, which unfolds in a number of stages, beginning with the cloth being cut to a pattern. The various components of each shirt from Drake’s eponymous staples, whether it be an Oxford button-down, long point collar, striped poplin, denim or overshirt, are made separately: collars and cuffs are lined, plackets and hems are sewn, buttons are whipped. Drake’s always employs single-needle stitching, “a mark of true quality in shirtmaking” says Bagg. Single-needle seams are very clean, neat and accurate. Moreover, they’re strong and durable, even if they are a little more expensive. “These components are then assembled into the finished shirt, before its pressed and packaged by Sue Clarke and her team, ready to be sent out to customers.” Mon Pape, in the quality control division, who meticulously analyses shirts for potential defects, says she couldn’t even work a sewing machine when she first arrived “but through perseverance, I’ve learnt my craft and I get immense satisfaction from helping to produce quality shirts.” 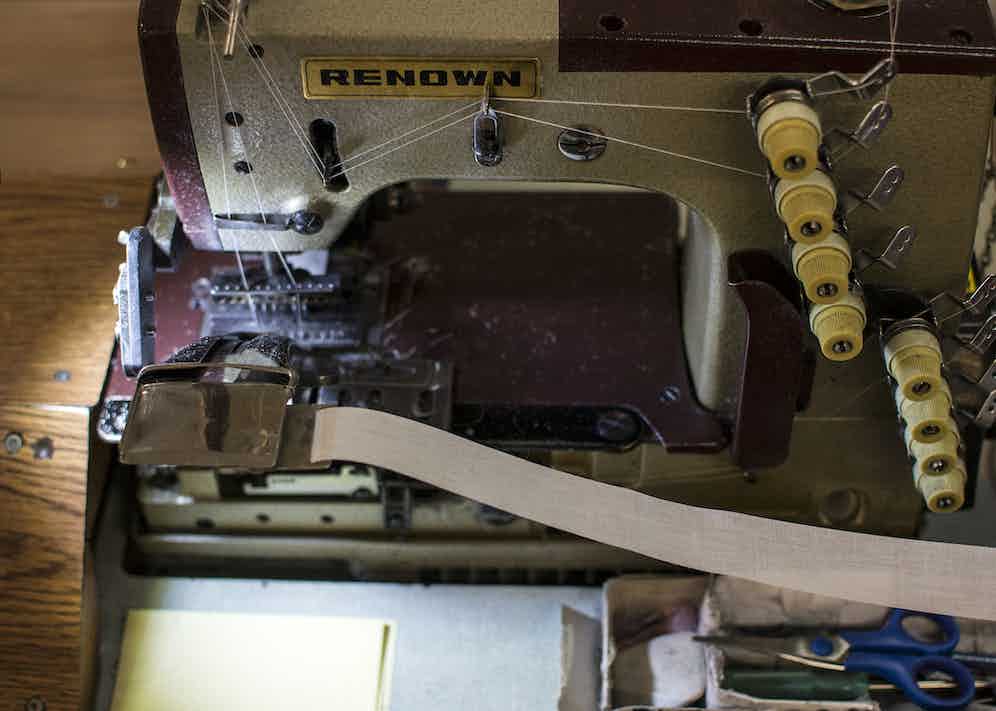 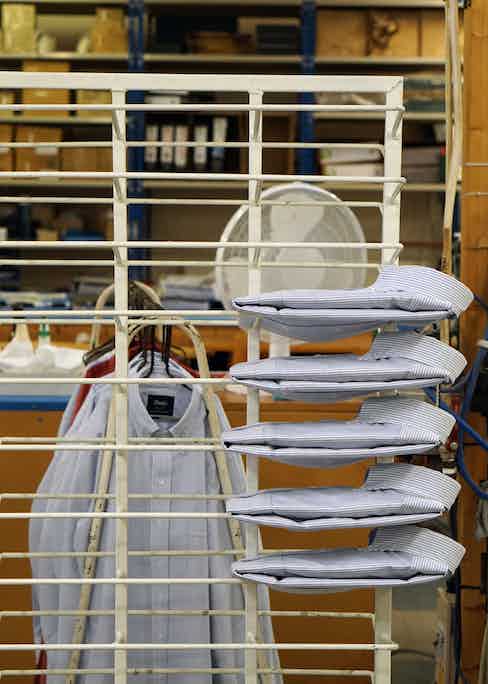 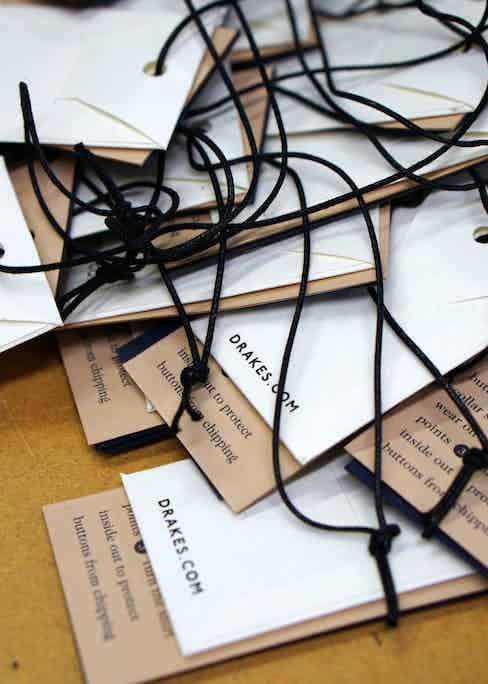 “Taking on a project like this is certainly a long term investment, adds Hill, “but for us, it's more than worth the time, effort, and money involved.” I’ve always thought of Drake’s as the menswear equivalent of the slow food movement, in that it’s a staunch advocate of sourcing local products where possible - the UK shirt making and tie producing facilities are a case in point even if the fabrics are largely Italian. Drake’s champions regional tradition - its knitwear is drawn from the finest makers from The Shetland Isles and Guernsey for example, in limited batches. It is revered for its quality and longevity while seemingly resistant to the passage of time and fleeting trends. Defenders of tradition whilst being preeminently cool in the same breath. I’m keen to know how much of an influence Hill has over the selection of the shirt fabrics? By that, I mean what percentage are down to his own trained eye? “Each season we source a lot of shirting fabrics from the world's finest mills (Hill has enviable contacts in the field such as the esteemed Dr. Ottaviano Mantero Scheuten, at the helm of Fermo Fossati, the company who own Carlo Riva, whom he can call upon for such things) and often these are exclusive cloths made expressly for us, to our exact specifications. I usually have a fairly clear idea of what I'm after, but I work in tandem with my wonderfully talented design team, who seem to have a gift for finding just the right thing.”

Having just opened a new store on Savile Row, while managing the relocation of the business from No.3 Haberdasher Street, and with the highly anticipated SS20 collection about to drop it seems Drake’s are in the midst of a golden epoch themselves. To this, we doff our Chard Racquets cord caps.