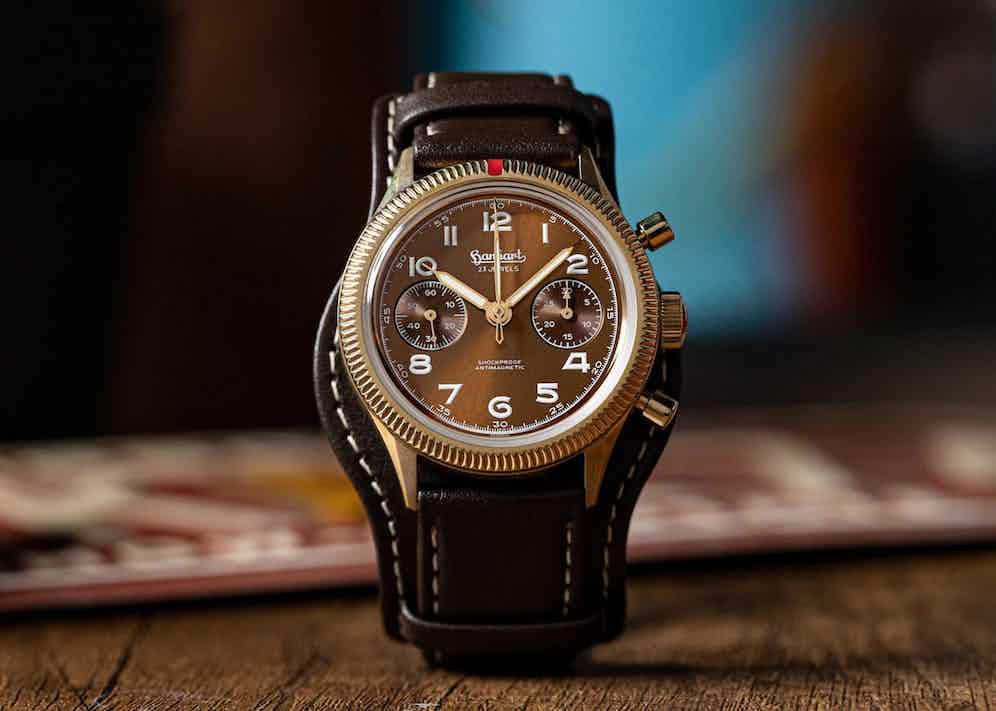 When we launched our Hanhart Bronze 417 last year, we didn’t realize how popular the watch would be. We had no clue that this cool functional pilot’s chronograph rendered in quick patina bronze would end up selling on the secondary market for a considerable premium. So, first of all, I want to thank everyone who bought the watch and shared it on social media and supported the project.

When it comes to special editions, our philosophy has always been to make the watches we want to wear. But, at the same time, it is important that we tap into the authentic spirit of a brand or a model. With the 417, the project was very special because when we first broached the idea to Felix Wallner, Hanhart’s co-managing director, it didn’t exist in the brand’s line-up. Felix had seen the buzz that had built up around the original watches, and he could see that there was a strong desire from the collector’s community. So, amazingly, he agreed, and we began our 417 adventure that ended up taking several years. 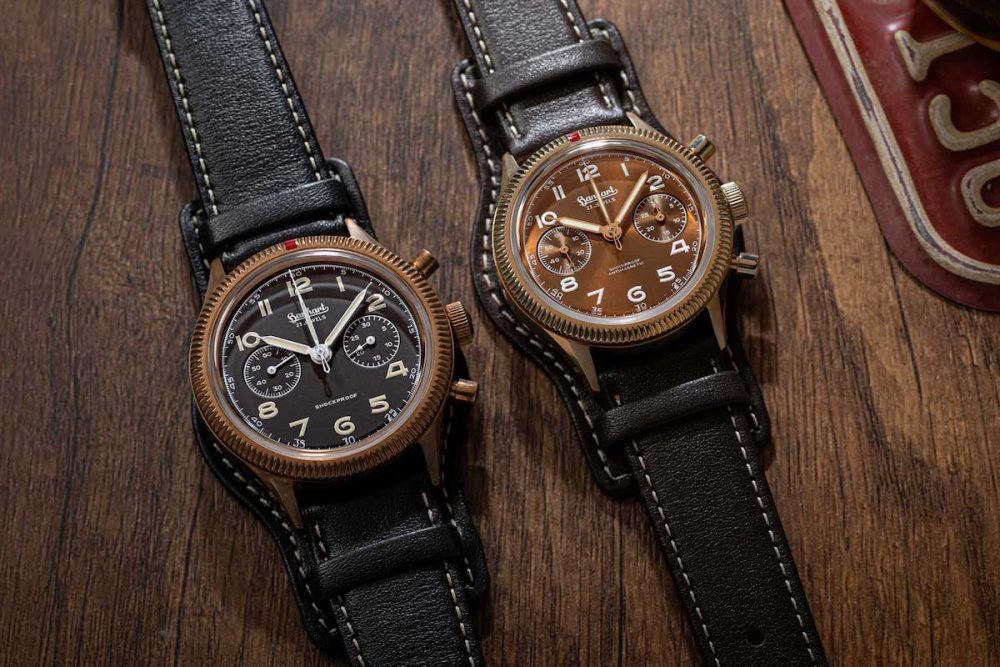 Why? Says Wallner, “The first thing that we wanted to do was recreate the original proportions of the 417. That meant, first of all, a relatively thin case. This took a lot of effort as we wanted to incorporate a more practical hand wound chronograph movement, the Sellita SW510. The next thing was to get back to the historic bezel which was actually very thin and featured very fine fluting. Then we had to source the right domed sapphire to replicate the look of the original watch. We went through many designs, working off our original 417 watches so that when you place the new watch and vintage one next to each other, they look almost identical.”

But, of course, there was one area in which the new 417 was different from its ancestors. This was related to its case size. So, it was remarkable to me when I received a phone call from Felix Wallner to discuss a follow-up to our Bronze 417 and the first thing he said was, “Let’s do an all-new case that is identical in size to the vintage watches. Let’s do it in a case diameter of 39mm!” I loved this. Because here was the head of a watch brand proposing to go a more difficult, labor-intensive and execution. To me, this speaks volumes of the type of guys that run Hanhart: dudes with real integrity. 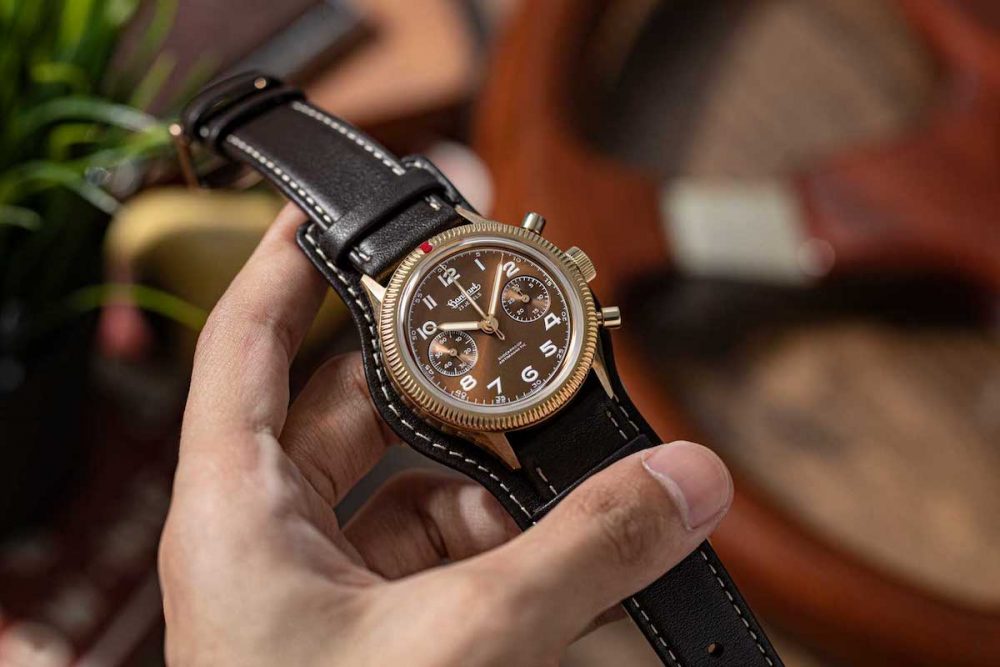 But we didn’t just stop at changing up the watch’s diameter, which required the construction of an all-new case. For some time, I had been fascinated with the idea of executing this watch with a brown sunray dial. Where did this idea come from? It’s actually pretty simple. My favorite watch, and the one that will be strapped to my wrist when they light my Viking funeral pyre to immolate my alcohol- soaked corporeal form and hopefully send me to Valhalla to feast at the right hand of Odin and drink mead out of the skulls of my vanquished enemies, is my Patek Philippe 5970. But this watch is a special execution version that features the most beautiful watch dial I’ve ever set eyes on, which is brown bronze in color with an amazing sunray finish that is radiant under direct sunlight. While I know a pilot’s watch is supposed to have a matte black dial to absorb sunlight and probably the least practical dial is one that reflects light into your eyes, let’s also agree that no one buying one of these is using it to dogfight other biplanes over the Atlantic. So, for me, the bronze dial is a homage to my beloved 5970. 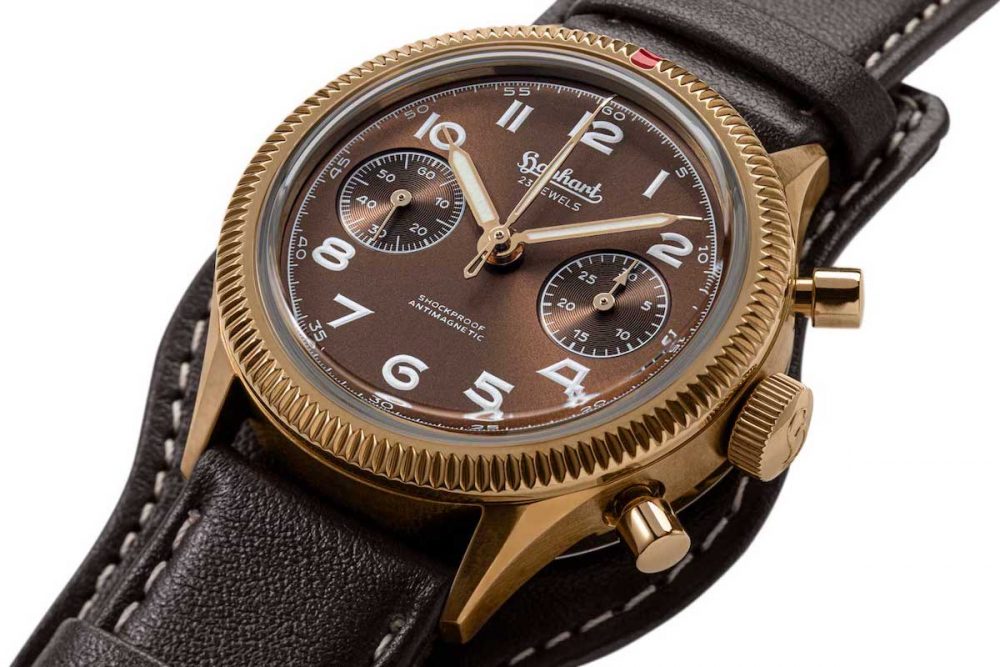 All the print on the dial is rendered in stark white with BGW9 Super-LumiNova for higher visibility. The hands are executed in bronze, and we’ve lumed the hour, minute and even the chrono seconds hands with C3 Super- LumiNova to harmonize with the dial and case. Why did we lume the seconds hand? Well, because that’s what they did back in the day with the 417 ES, made between 1956 and 1958, that inspired this watch. 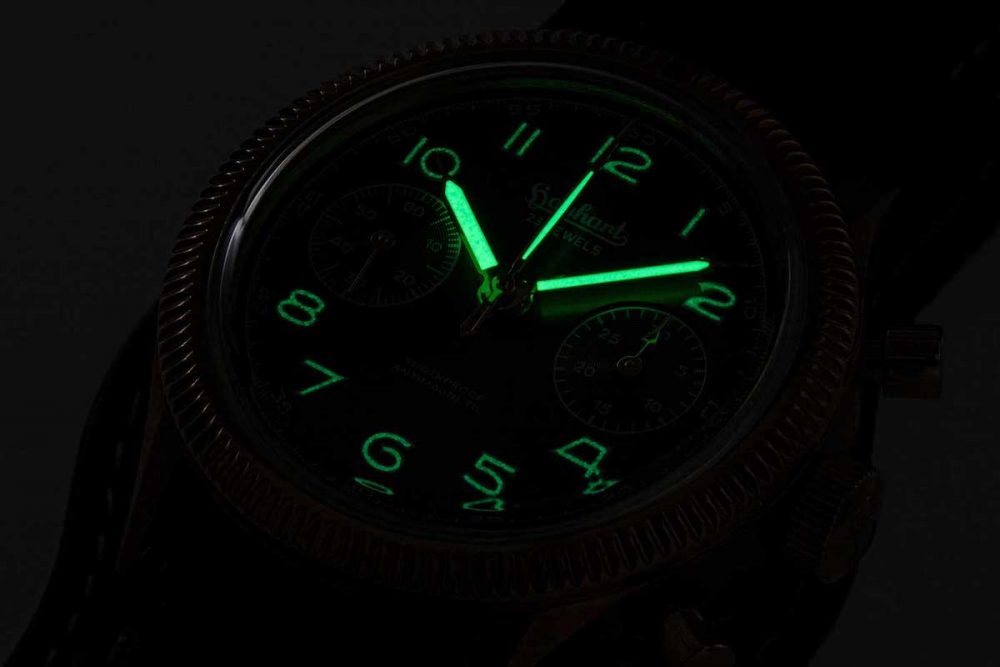 This time around, the words “Shockproof” and “Antimagnetic” appear on the dial just like on the original watches, which means that there is a soft iron cage inside to protect the movement from magnetic fields. But we didn’t stop there. Wallner and I decided that with this beautiful dial, we should select an alloy of bronze that would patina less aggressively, so we decided to use aluminum bronze CuAl10Ni5Fe4, instead of bronze CuSn8 which we had used in last year’s watch. Finally, we decided that while the 417 should still have a Bund strap, we should render it in chocolate brown to better match the dial. I think the result This year’s brand new Hanhart 417 Chronograph Edition No. 2 “Copperhead” for Revolution & The Rake expensive route rather than the easy one of just reusing the 42mm case from last year with a different dial is something quite stunning. We will make this watch in a limited edition of 200 pieces with a price of USD 2,050. 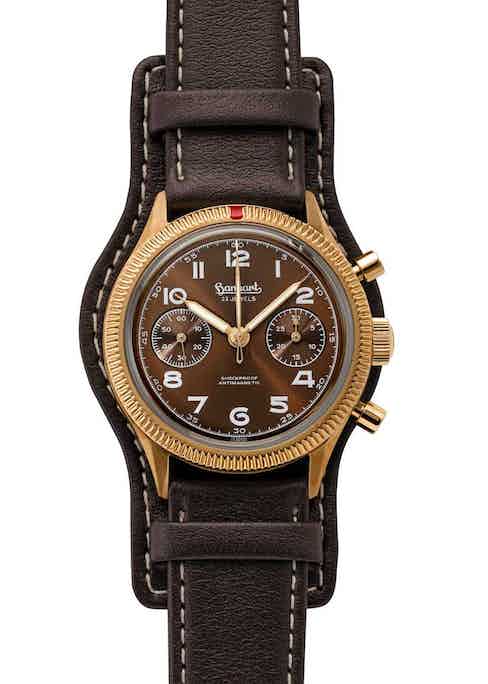 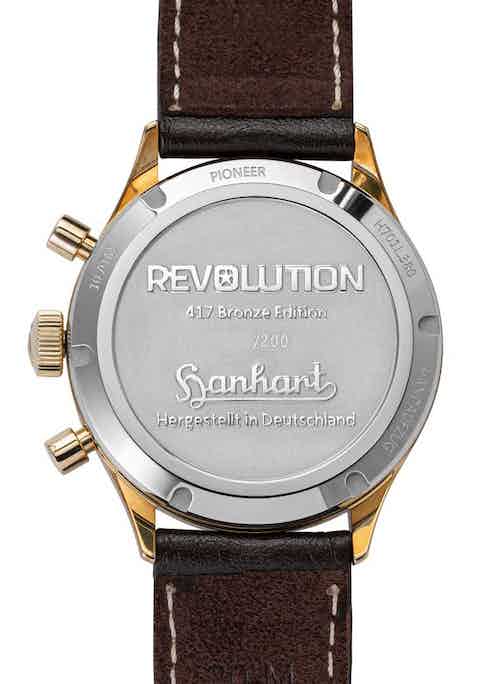 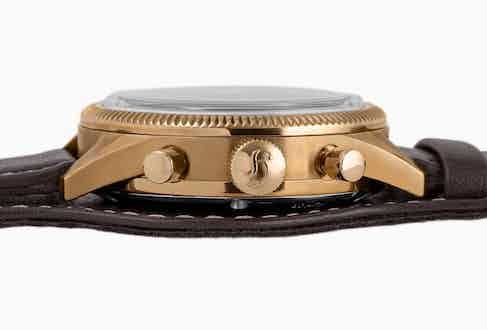 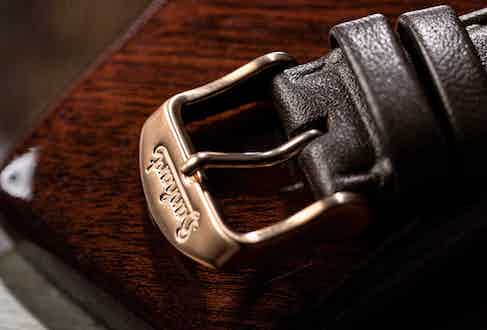 For those of you interested in a little history of the 417, let’s go back in time to 1882 when one Johann A. Hanhart set up his eponymous brand in Diessenhofen, Switzerland. He relocated to Schwenningen in south Germany near the idyllic Black Forest in 1902, and by 1924, the Hanhart brand had gained a reputation for making highly precise yet affordable stopwatches. At the time, the chronograph complication was only available with a staggering price tag. Hanhart, seeing the popularity of competitive sports, wanted to democratize these timing devices, and he achieved great success as a result. In 1935, the company, helmed by Johann’s son, Wilhelm Julius Hanhart, added to its achievements the creation of a split seconds stopwatch. In 1938, Hanhart launched its first modern chronograph powered by the legendary caliber 40. This was a monopusher movement which was utilized to create watches for the German Luftwaffe and Navy. By 1939, officers in both these branches would wear chronographs typified by a thin fluted rotating bezel, and a large matte black dial with luminous cathedral hands and large luminous markers. Interestingly, from the beginning, these watches were made in both stainless steel and chrome-coated brass. 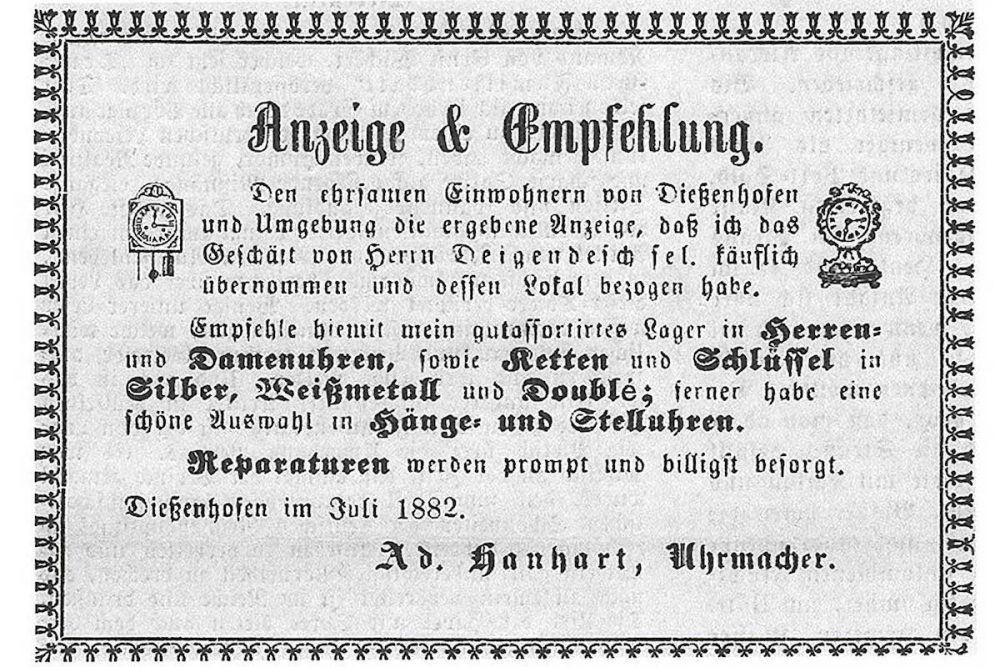 Hanhart was founded in 1882 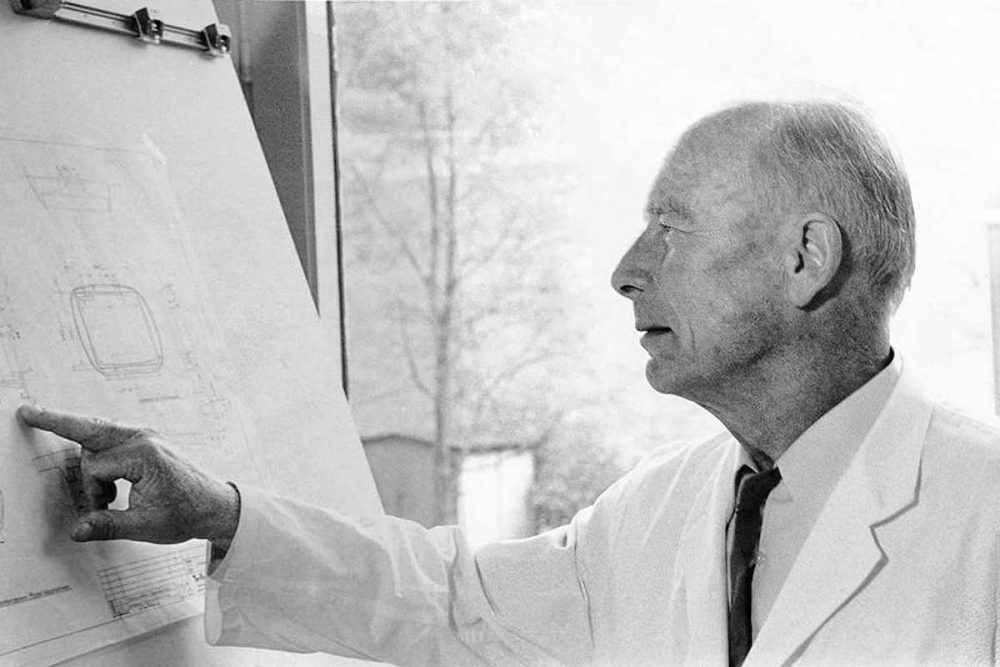 In 1935, Wilhelm Julius Hanhart, son of Johann A. Hanhart, added to the brand’s achievements with the creation of a split seconds stopwatch 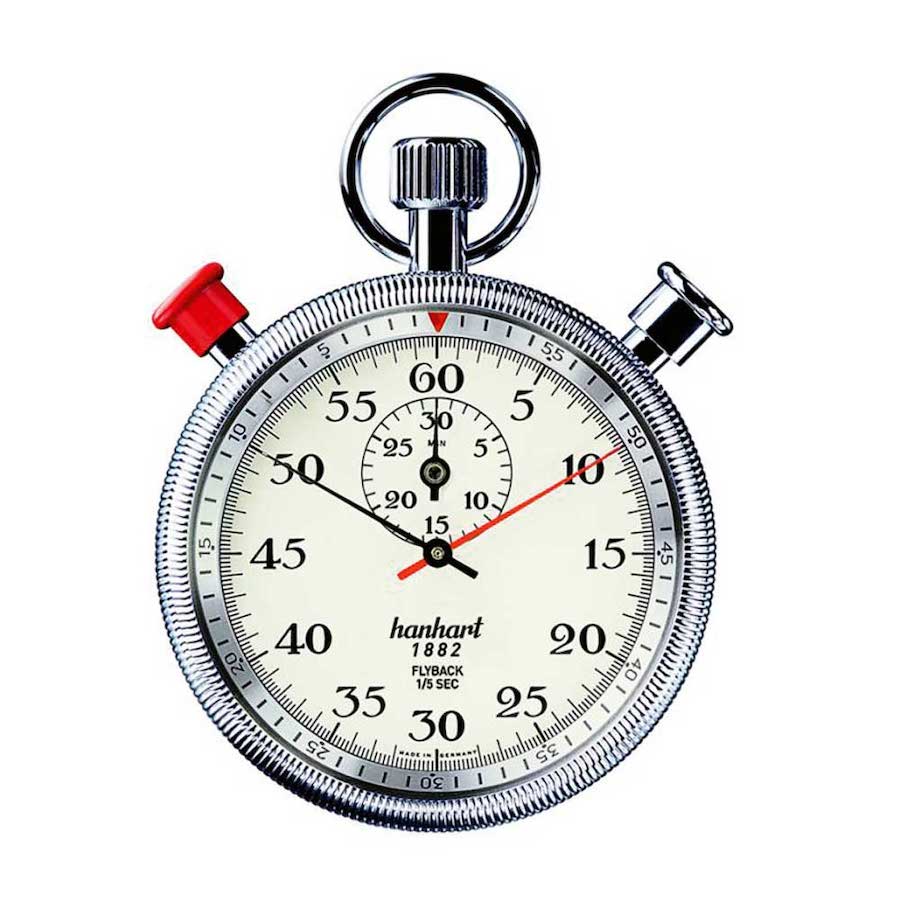 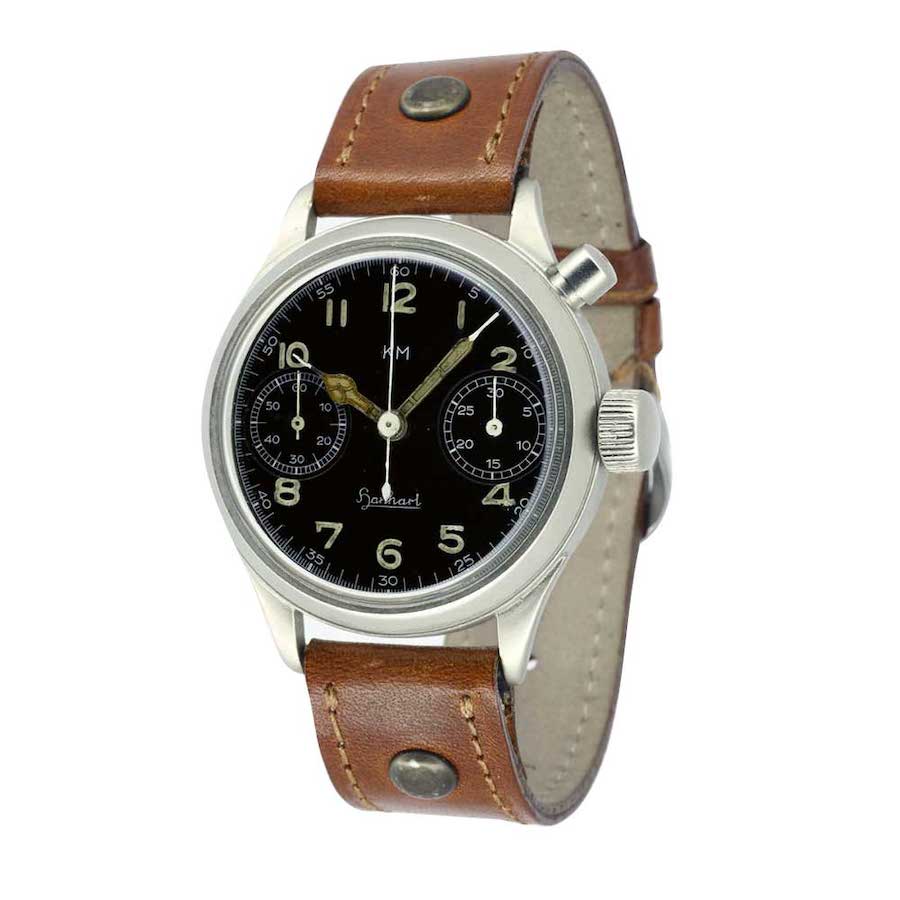 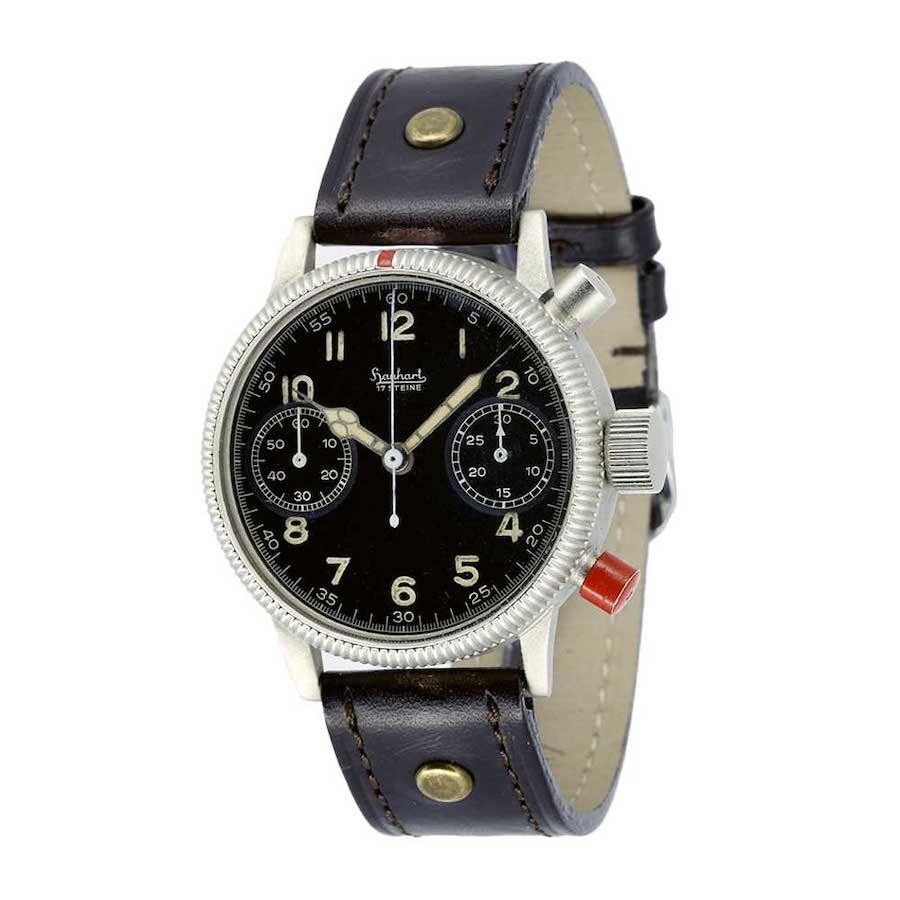 In 1938, Hanhart launched its first modern chronograph powered by the legendary caliber 40, a monopusher movement which was utilized to create watches for the German Luftwaffe and Navy (Images: Hanhart) 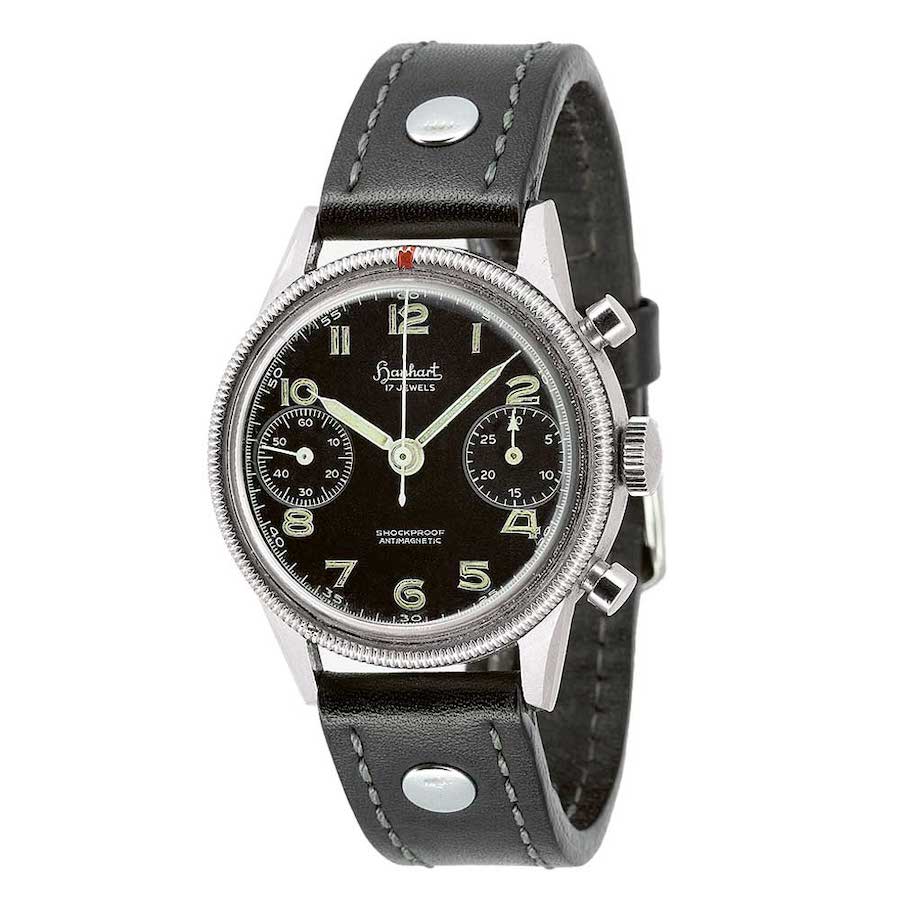 1941 saw the introduction of the brand’s first two- button flyback chronograph movement, the caliber 41, a column wheel powered engineering masterpiece. Following the war, Hanhart produced Type 20 watches for the French military under the name Vixa. In 1956, Hanhart resumed production of its legendary pilot’s watches, now with the updated caliber 42. These watches are quickly distinguished from the World War II era timepieces by having modern pencil shaped hands. By 1958, Hanhart had ceased production of pilot’s watches, and during the two-year period in which it manufactured the 417 flieger or pilot’s chronograph, it is believed that only 1,000 watches were made — 500 with the designation “ES” for stainless steel and 500 more with no additional designation, which were brass watches that were chrome plated. There was a further minuscule number of these watches made with white dials for medical professionals. As an aside, our bronze watch was inspired by the brass cased watches where the plating had worn away to reveal the rich warm-colored base material. 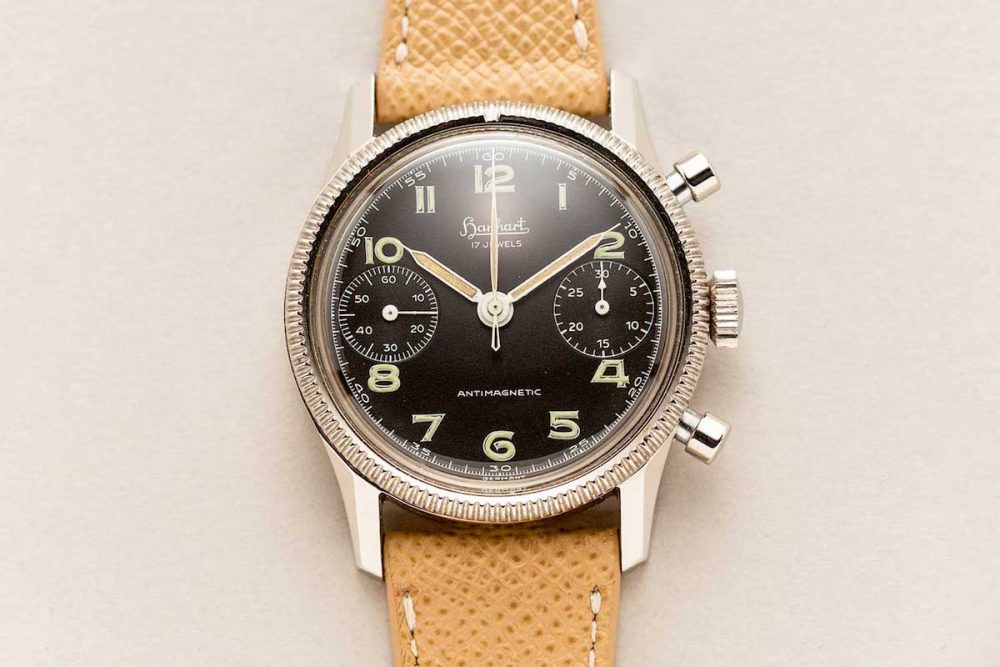 An instance of the Hanhart 417 ES, made between 1956 and 1958. Only 500 pieces were made with the designation ES for stainless steel (Image: shucktheoyster.com)

The 417 was one of the most handsome and pragmatically designed military chronographs ever created. These watches eventually became sought after by anyone interested in performance sports, thanks to their reliable movements, high visibility due to the 39mm case size and clean dial design, and their shockproof and anti-magnetic status which is proudly proclaimed on the lower half of the dial.

The most famous person to wear a Hanhart 417 was the “King of Cool” himself, Steve McQueen. How McQueen came to own his watch is something of a mystery. Though what is clear is that he had exemplary taste in everything from motorcycles, particularly Bud Ekins-tuned Triumphs and Nortons; to cars, such as the 1958 Porsche 356A 1600 Super Speedster, Ferrari 275 GTB4 and Jaguar XKSS; to bespoke suits, as seen in his collaboration with Douglas Hayward in the film The Thomas Crown Affair; to women, particularly Jacqueline Bisset, Candice Bergen and Ali MacGraw. It was said that on the set of Sam Peckinpah’s The Getaway, the attraction between McQueen and MacGraw was so palpable that it threatened to melt the celluloid as it ran through the camera gate. So, it was no surprise that he naturally gravitated to the ultra cool 417 (his watch is believed to be an ES), which he wore most frequently on a Bund or “fat strap” style bracelet. 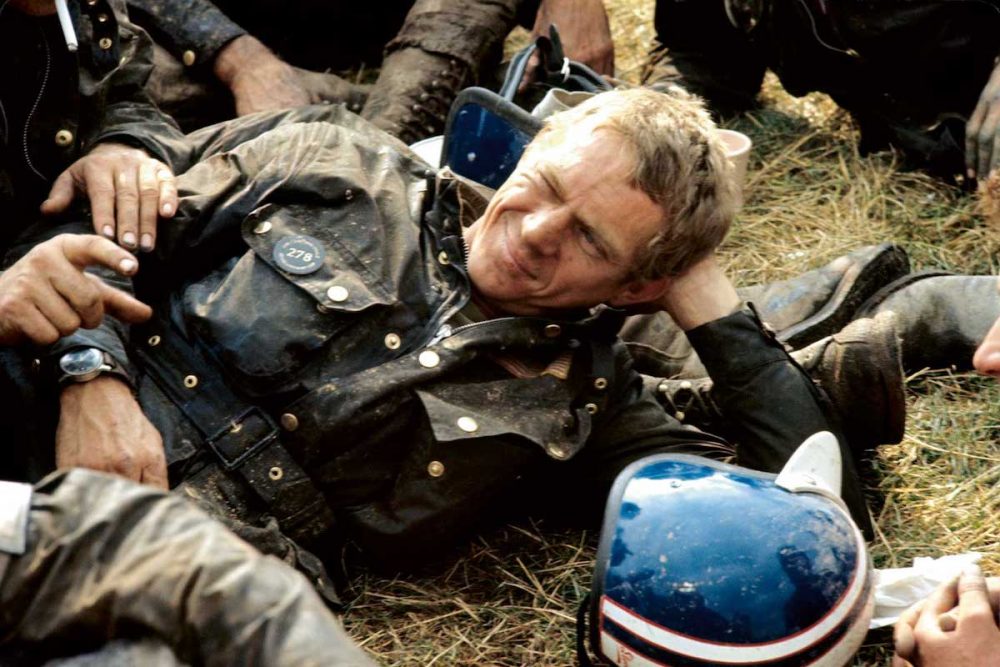 Steve McQueen resting after his run-out on the 1964 ISDT track. Each evening after the race (300km on average on terrible paths), the runners used to collapse on the grass, covered in mud and oil. Visible on his wrist is the Hanhart 417 ES (Photo by François Gragnon / Paris Match via Getty Images)

His affection for his Hanhart 417 was made conspicuous when McQueen came to East Germany along with motorcycle racing specialists the Ekin brothers to represent the United States at the International Six Days Trials (ISDT). Often described as the Olympics of enduro motorcycle racing, the ISDT was first established in Carlisle, England, and invited five-man teams from countries around the world to a showdown in off-road motorcycle skills. It is well known that McQueen was, at this time, one of the United States’ most skilled motorcyclists. Before the era of massive insurance waivers, McQueen even performed the majority of his bike stunts on The Great Escape himself. However, the famous jump over the wire fence was made by his ISDT teammate Bud Ekins on a Triumph TR6C disguised as a WWII era BMW. In the ’60s Ekins competed in seven ISDTs and won four gold medals and one silver. The team including McQueen were dubbed the “California Boys,” and they were the first American team to ever compete in the ISDT. McQueen even had the honor of carrying the Star-Spangled Banner in the opening ceremony. Now, think about it from this perspective: McQueen was notoriously obsessed with detail when it came to competitions. He had gone to pick up his 1964 Triumph TR6 Trophy SC at Comerfords in London where he proceeded to make all the modifications himself. So, he surely applied that same sense of high scrutiny to the timepieces in his life. The mystery behind McQueen’s Hanhart 417 ES is that while the provenance of his Heuer Monacos and his Rolex Submariner have been well documented, the fate of his Hanhart is unknown.

It’s a funny coincidence. It was only after the prototype of our new Bronze 417 “Mark 2” was finished that I realized the beautiful brown dial reminded me of something. And that is Steve McQueen’s stunning metallic brown 1963 Ferrari 250 GT Berlinetta Lusso which was purchased by his first wife, Neile Adams, and was his daily driver in Los Angeles. This has always been one of my favorite cars and the fact that it was Steve McQueen’s makes it, of course, even more mythical. Could this have been embedded in my subconscious while thinking of this dial? No — it was absolutely my 5970 that inspired it. But it is amusing that the colors of the car and dial are close. 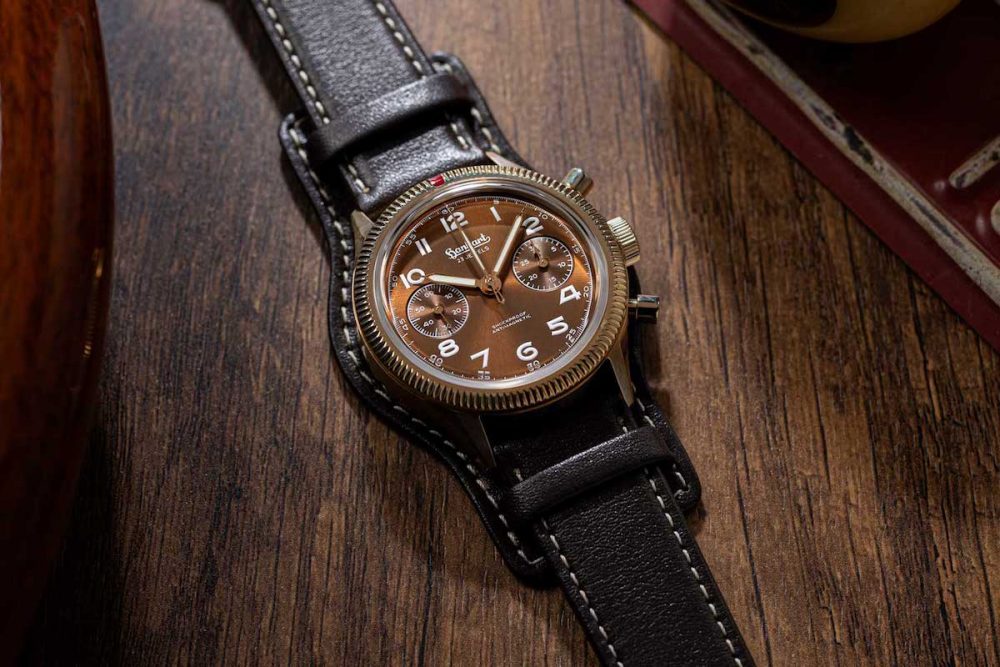 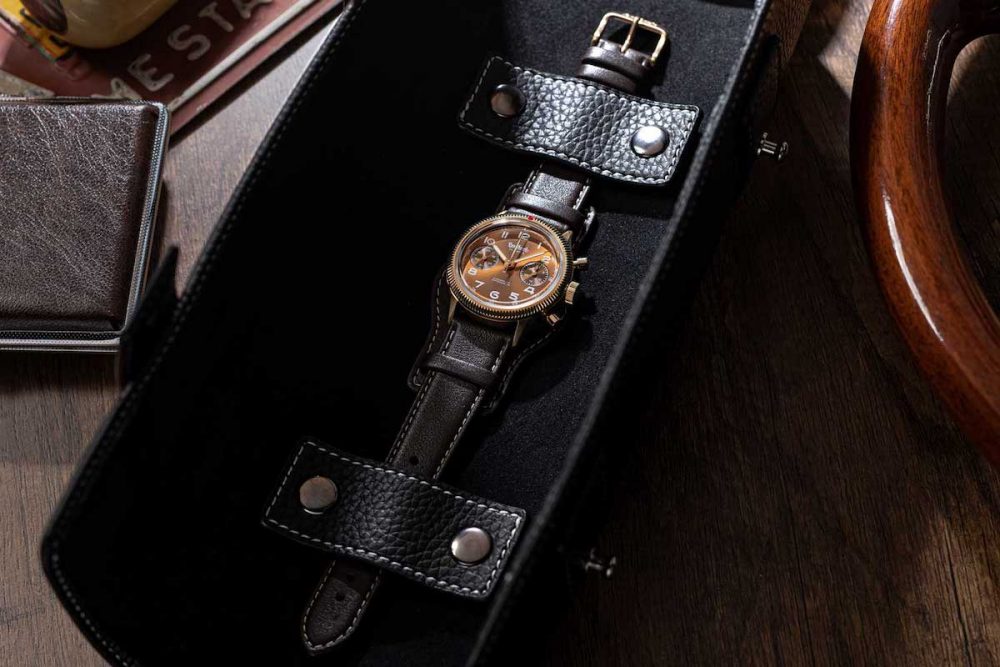 Hanhart 417 Chronograph Edition No. 2 “Copperhead” For Revolution & The Rake 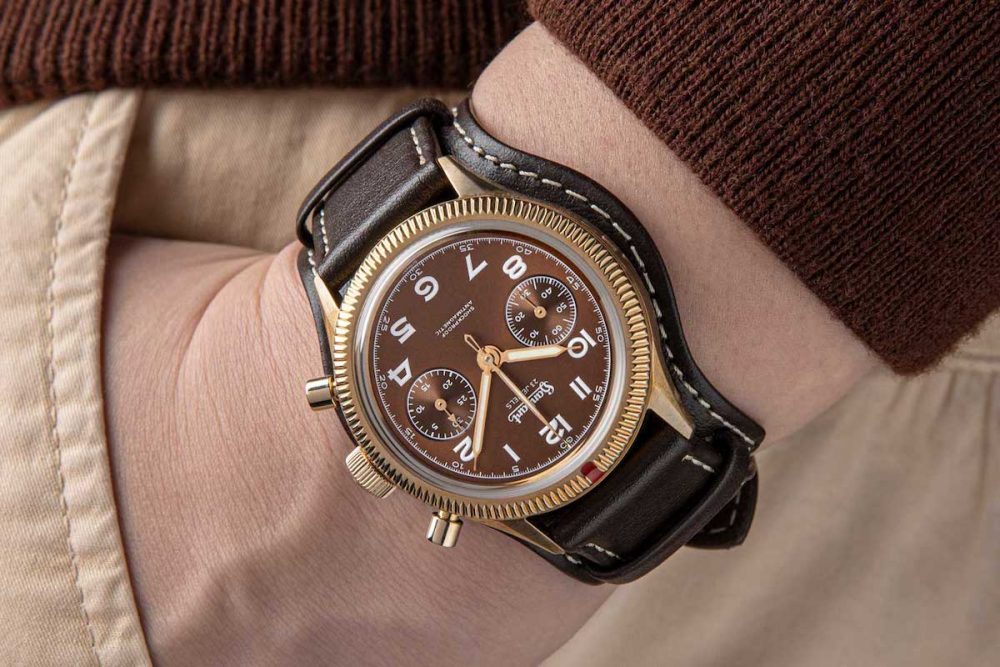 Hanhart 417 Chronograph Edition No. 2 “Copperhead” For Revolution & The Rake on wrist