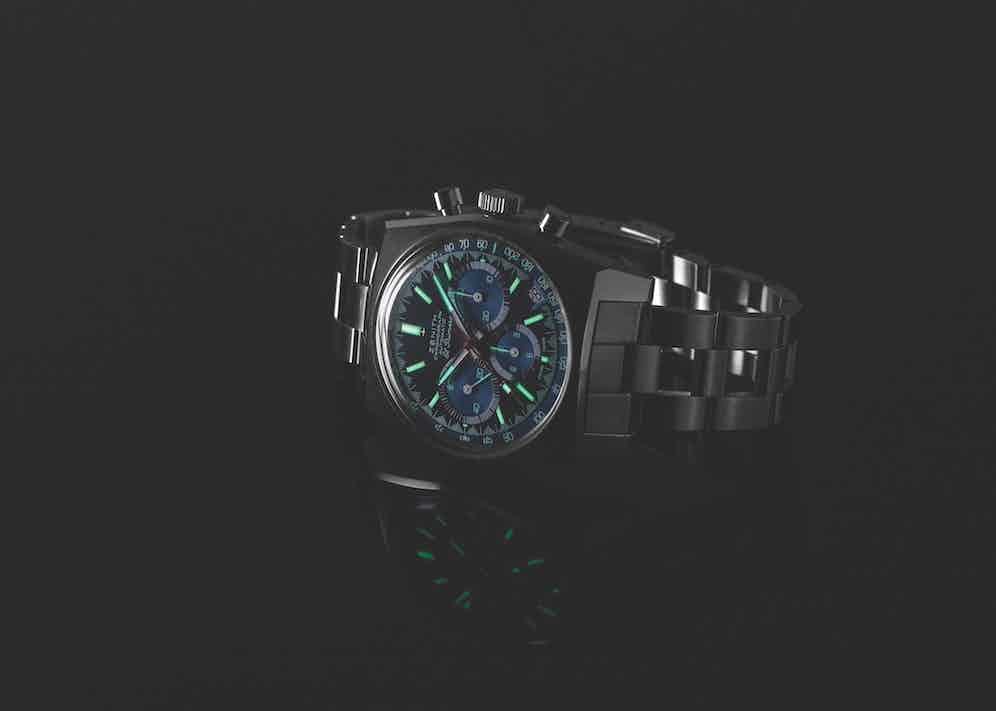 An upgrade introduced in the watch is the application of luminous paint on the markers, hands and dial details.

In the pantheon of watchmaking’s most iconic watches, many have received nicknames that eternally link them to famous individuals, a material or even a shape. Take, for example, names such as Paul Newman, Jo Siffert, Padellone, Bronzo, Batman... Just think of all the timepieces associated with these designations.

Among emblematic sports chronographs that have seen the light of day since the birth of the watch industry, there is only one timepiece bestowed with a sobriquet that inflames the desire of men to such an extreme — that is, of course, Zenith’s legendary El Primero Ref. A3818, otherwise known as the “Cover Girl”, thanks to its appearance on the front of Manfred Rössler’s book Zenith: Swiss Watch Manufacture Since 1865.

Why did the watch end up on the cover of a book dissecting the history of this eminent watchmaking maison? If you thought the reason was deeply linked to the narrative story that makes up the Zenith brand, the final explanation is much simpler than that. As Rössler, the author, puts it: “The beautiful blue colour led to this decision. I like blue dials.” We can’t blame him.

For those of you who have had the chance to set eyes on the “Cover Girl”, the watch can only be described as jaw-droppingly stunning. It uses the same angular, tonneau-shaped case as the Zenith Ref. A384, but features one of the most unique dials in modern watchmaking, with striations that catch the light quite magnificently. Its defining feature is a stepped or uneven racing track demarcated with thin radial lines that look like a shark’s tooth. These tiny lines, designed almost like a soundwave, lead the eye towards the combination of a pulsation and tachymeter scale above the minute track. It is important to note that there are precisely 300 of these ultra-thin markers on the dial, allowing you to read the chronograph seconds to an accuracy of 1/10th of a second, which the legendary high-frequency 5Hz (36,000vph) El Primero movement is capable of. 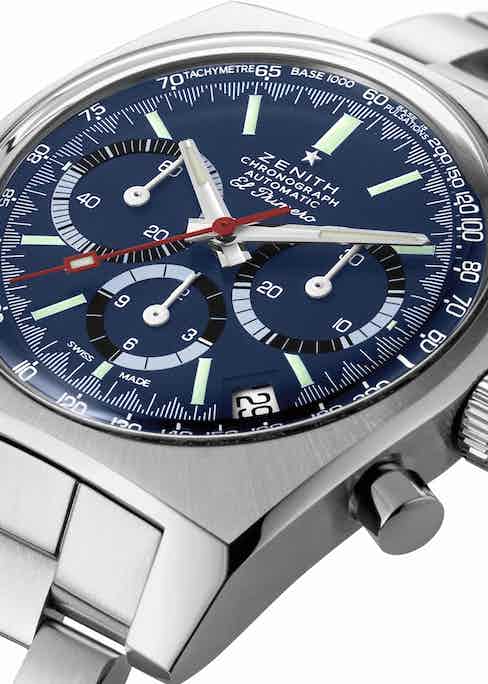 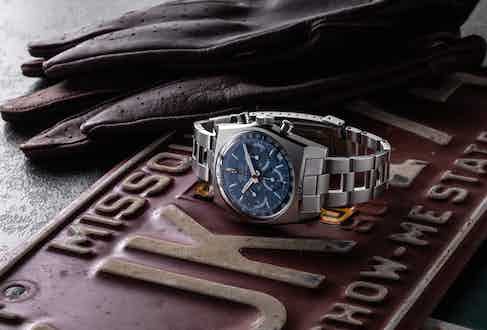 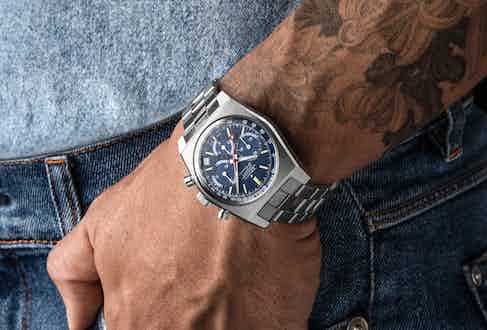 The El Primero movement is an icon in itself and has been in production for more than 50 years. Launched in 1969, it is the result of seven years of hard work from the Zenith watchmakers who set out to create the first fully integrated automatic chronograph movement. The more convenient option would have been to simply add a module to a base movement, but Zenith’s plan was far more ambitious and contained additional requirements, making the project even more challenging. The main requirement, of course, being the high-beating frequency of the calibre, allowing the chronograph function to measure time accurate to 1/10th of a second.

It is always good to remember that the El Primero movement almost disappeared at the end of the 1970s when management at Zenith Radio Corporation, the American parent company of the brand at the time, lost faith in mechanical watches and decided to limit its production to quartz timepieces only. This led to the order to destroy or sell the metal of the presses and tools associated with building mechanical movements. One watchmaker, Charles Vermot, a specialist in chronograph movement construction who had followed the construction of the El Primero calibre since its first sketches, rebelled against his management’s orders and took it upon himself to secretly stash the tools, machinery, blueprints and components inside the manufacture’s attic where they sat hidden away until the Zenith watch company changed ownership and decided to embark on a journey to relaunch the production of the famous El Primero movement.

2019 wasn’t only about celebrating the golden jubilee of Zenith’s almighty calibre, but it was also a period of ascension for Zenith to become one of the most exciting, relevant and energised watch brands in the industry. Beginning with the reintroduction of the hallowed Ref. A384, the watch that started it all back in 1969, this was followed by a salvo of contemporary watchmaking’s most enthralling special editions, including a timepiece dubbed “The Edge of Space” made in collaboration with George Bamford and Mr. Porter, a limited series of Ref. A386 watches in precious metals, as well as an amazing pièce unique Ref. A386 in platinum with a lapis lazuli dial created in collaboration with Bacs & Russo, which raised CHF200,000 for charity. 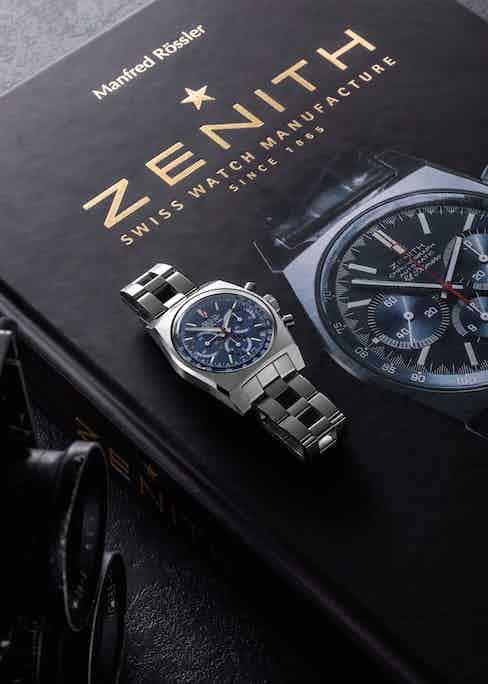 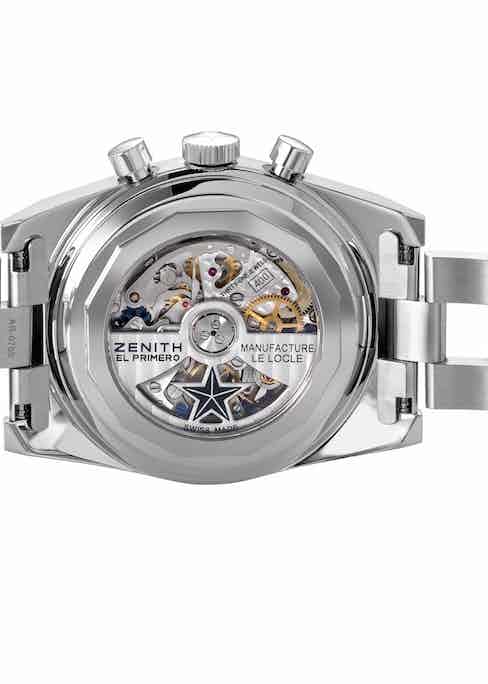 In vintage collecting culture, the “Cover Girl” is a rare bird and possibly one of the single most sought-after and rarest Zenith chronographs on the market. With just 1,000 pieces believed to have been made, finding one in pristine condition isn’t an easy task. Eric Wind, Founder of “Wind Vintage,” explains that many examples have polished cases which erase the sharp angular profile of the case. Others will have the metallic blue paint on the dial peeling off. It can be an attractive look, but usually you can bet that it isn’t. Finding one with an original Gay Frères ladder bracelet is also rare in itself, since this was an expensive add-on back in the day. The interest in Zenith Ref. A3818s is currently at an all-time high with prices often hanging around the USD20,000 mark, either at auctions or when changing hands between collectors, making the watch a truly prized and elusive beast.

We at Revolution have been waiting patiently to unveil our own collaboration with Zenith and we wanted to satisfy the thirst from collectors for this beautiful timepiece. Please help us welcome the revival of the legendary 1970s Zenith Ref. A3818 “Cover Girl,” but with one huge difference compared to the original model: this time, the dial has been treated with luminous paint, even down to the 600 markers on the racing track, which, in combination with the luminous hand set — including those found in the subdials — means you can record elapsed time, down to 1/10th of a second at that, in low-light conditions. Now obviously because the racing track and dial text are smaller than the hour markers and hands you will notice a difference in glow between them, however this is definitely a cool touch for connoisseurs. Since we always strive to provide the best value possible to our readers, we couldn’t revive this watch without the ladder bracelet so you bet that it comes paired with the timepiece, and we are sure that Zenith enthusiasts will love this thoughtful touch. As an added bonus we are offering two additional straps which will allow owners to mix the style of their Zenith watch.

We would like to thank the brand’s dynamic CEO Julien Tornare and its incredible product head Romain Marietta for this incredibly meaningful partnership. We would also like to thank Zenith for intentionally keeping the price of this timepiece accessible, even with the addition of the famous ladder bracelet, as a thank you to the Revolution and The Rake readership for their loyalty and passion.