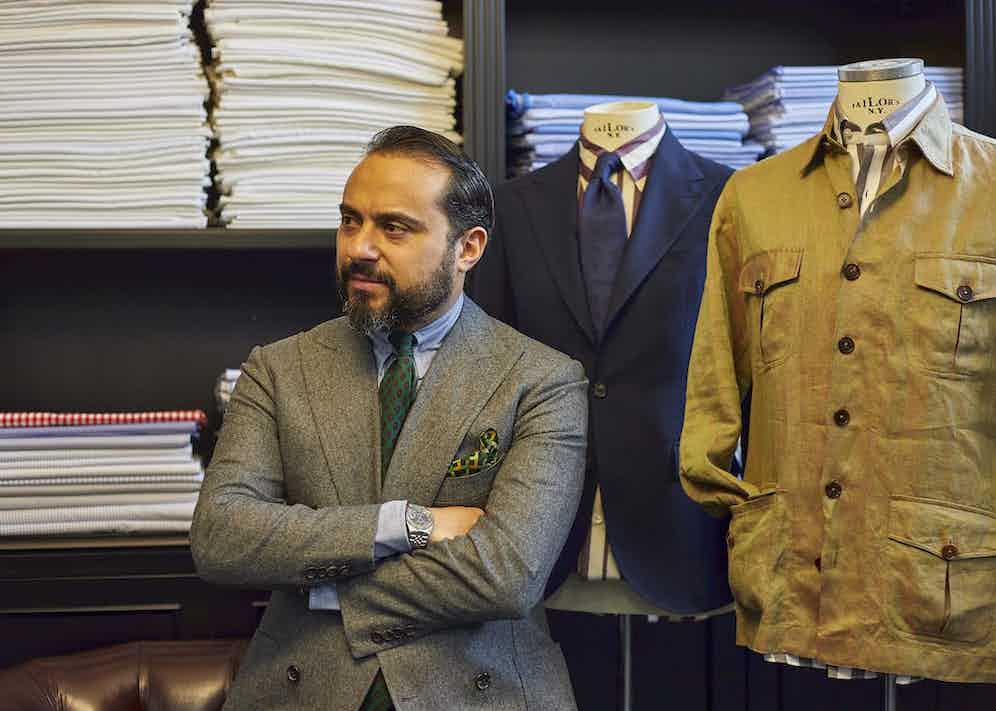 Salvatore Piccolo at his laboratory and in-front of his cloth library and two well-styled looks.

The most attractive facet about Neapolitans is the importance of family and tradition, which is clearly evident when examining the historic city’s artisans, as most are family owned. Salvatore Piccolo learned his trade from his mother, Maria, who began working in the family’s shirt making workshop aged nine. As such, the inner workings of the art of shirt making has been inherited by Salvatore, who is just as much a designer as he is an entrepreneur and a tailor. Today, they work alongside each other in perfect harmony in their ‘laboratory’. Salvatore is perhaps best known for being a bespoke shirtmaker, however, much of his attention is now directed on his burgeoning ready-to-wear offering that’s both contemporary and tasteful. What makes it special is that Salvatore’s ready-to-wear shirts still obtain a great deal of handwork that’s on par with his bespoke pieces, and that forensic-like attention to detail is evident across the entire range, too. We suggest exploring his latest ready-to-wear offering, which consists of easy-wearing staples that have a soft and luxurious handle thanks to Salvatore’s astute knowledge of fabric and material.

On the day we met, we, unfortunately, brought with us the stereotypical British weather. As a result, Salvatore was in flannels. He’s wearing a bespoke light grey, double-breasted flannel suit cut with wide peak lapels. It’s from his own range, as is most of his ensemble. He’s expertly downplayed the formality of a double-breasted grey flannel suit, which is traditionally suited (no pun intended) to the confines of the financial world, with a with well-worn Japanese chambray shirt. Salvatore is known for being a proponent of globally-sourced fabrics and his shirt features a tab collar that’s slightly creased – a touch of sprezzatura if you like. Between the collar rests a 40-year-old vintage printed silk tie with a slight dimple that was given to him by his great friend (and soon to be partner of The Rake) Maestro Luigi Solito of Sartoria Solito. Like all Neapolitans, he’s not afraid to accessorise. He wears a geometric motif printed silk square that’s stuffed into the breast pocket without much thought. It cleverly harmonises with the tie, while offering some contrast due to the orange in the square. On his wrist, he wears a stainless steel Rolex Datejust on a Jubilee bracelet, while on the other hand a wrapped spanner clads his wrist and acts as a nod to his expertise as a master craftsman. Finally, he complements the grey flannel trousers with a turn-up and a pair of chukka boots, which again bring down the formality of the suit. Overall, it’s a carefully put together ensemble that coincidently wouldn’t have taken much thought to create. 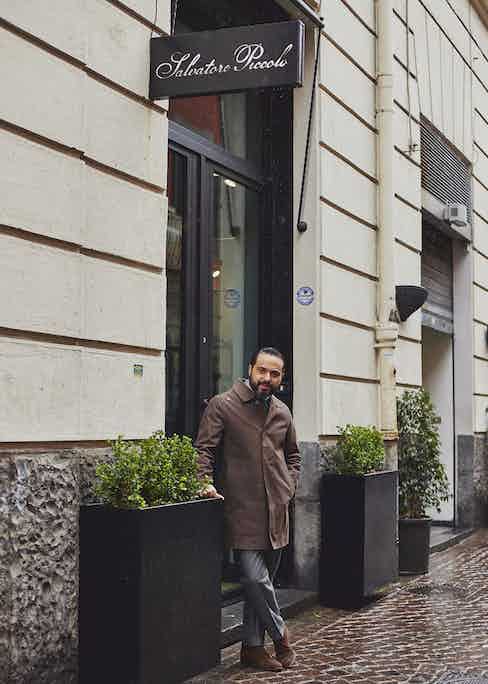 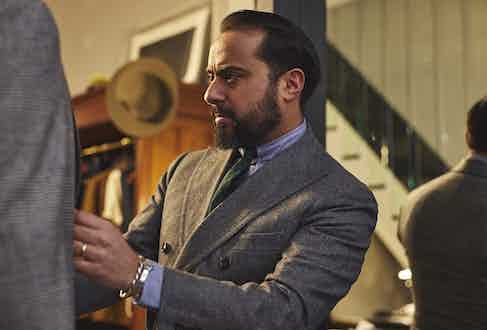 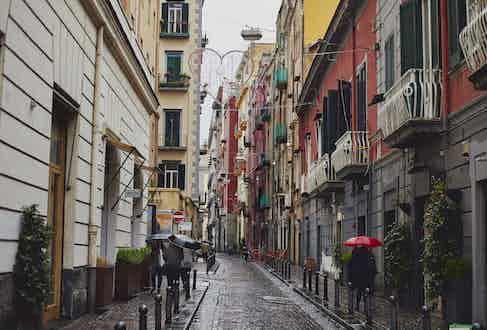 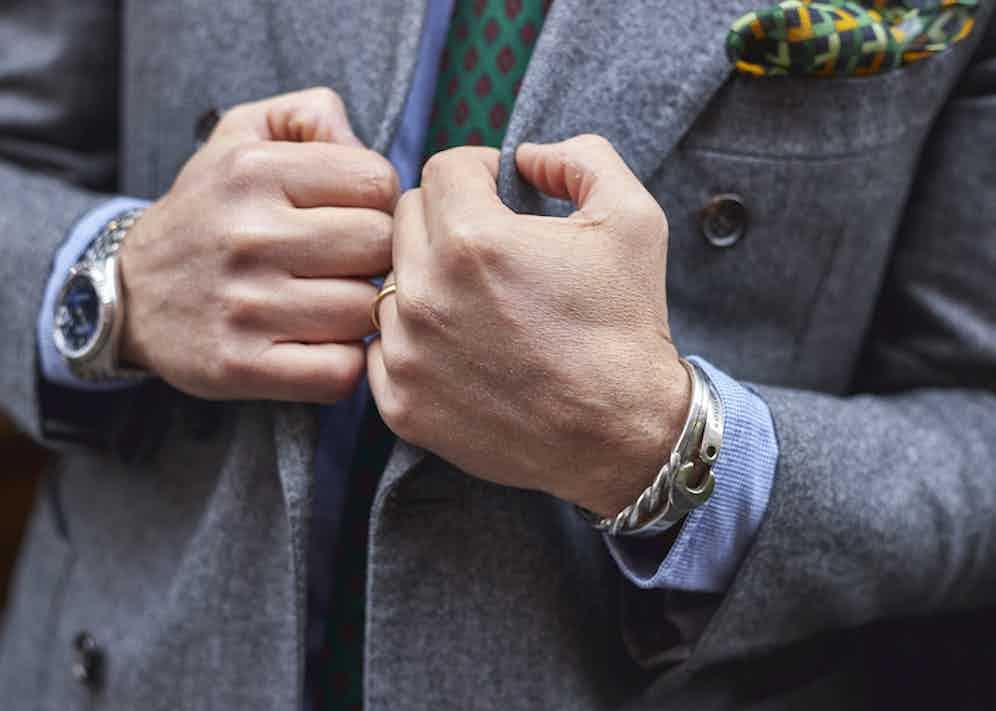 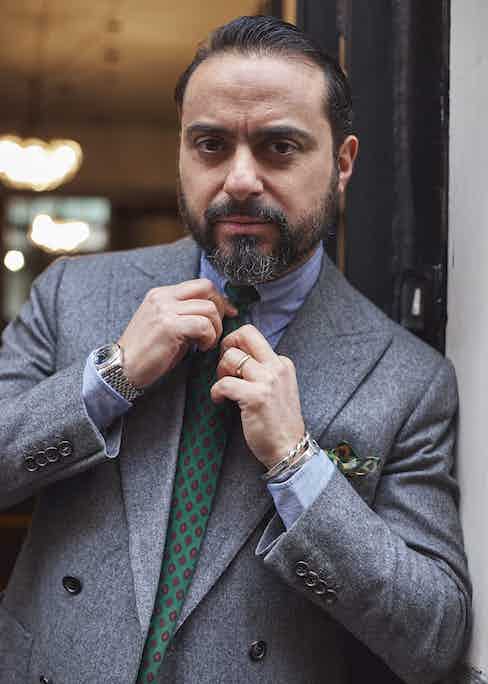 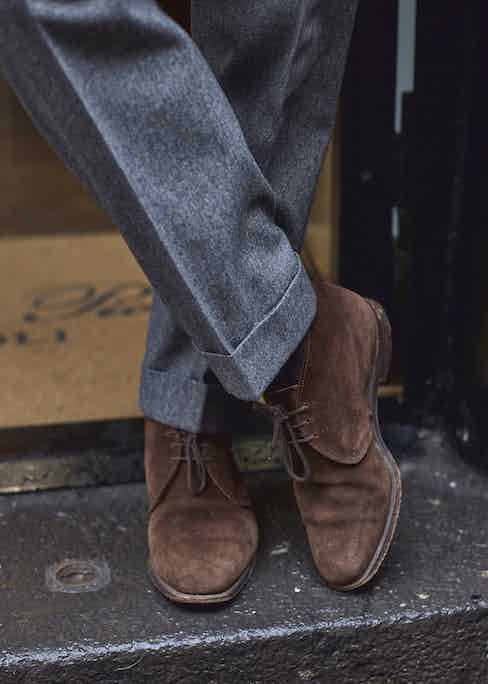 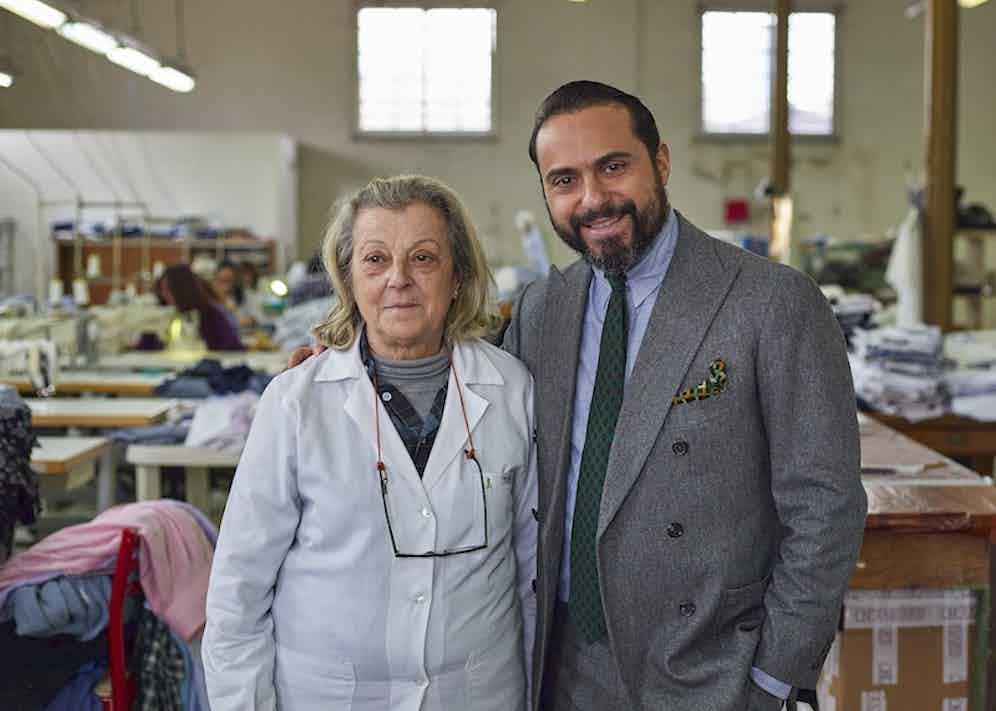