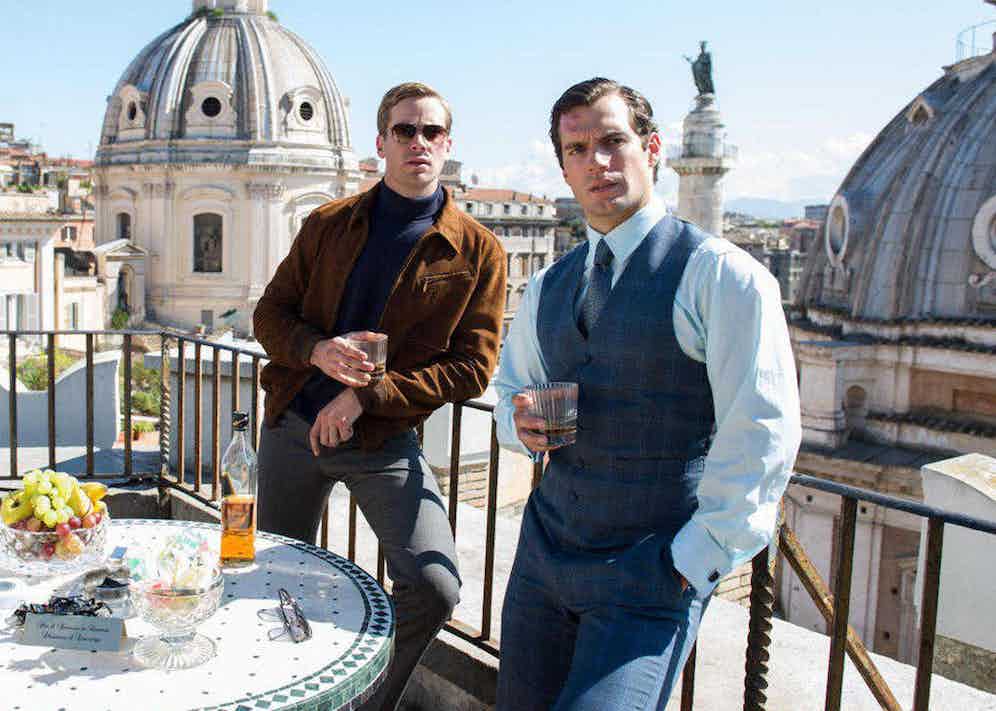 “That bow tie doesn’t work with that suit,” Henry Cavill drawls in 2015’s remake of spy comedy The Man from U.N.C.L.E. The comment is directed at his co-star Armie Hammer, who plays the uptight Russian spy to Cavill’s charming American agent (no stereotypes to see here). True to the original 1964 series, Cavill’s character Napoleon Solo is in possession of a collection of tailoring - charcoal flannel, navy wool, grey Prince of Wales check and above, a blue windowpane three-piece (the jacket of which is missing after an unfortunate incident with a fire) - as well as perfectly side-parted hair and Bond-like suavity. In contrast, Hammer’s Illya Kuryakin’s various roll-neck-and-jacket combinations are a little more evocative of the era. In one scene, the two get into a heated debate over whether, as a woman, one can wear “Dior with Rabanne”, and similarly don’t seem to agree on how to dress themselves.

Here, Cavill shows off his physique in the well-fitted suit (perhaps a little too fitted in the leg), a blue cotton shirt with French cuffs and a blue jacquard tie. It’s a professional look, and the single-breasted waistcoat, dress shirt and muted shades contrast Illya’s much more casual ensemble; a chocolate brown suede bomber jacket, navy knit and grey flannels. “It’s cool to work with period clothing,” Hammer told an interviewer on set, “everybody looks great”. Throughout the film, Hammer also wears a flecked wool peaked cap, and the look can be easily refreshed with a slightly tapered trouser (rather than a wide leg) and a more softly-structured suede jacket like Valstar's signature A1. The only thing both characters have in common is a pair of wire-framed aviators, which suit all face shapes and look great with tailoring and casualwear alike. Finish the look with a strong pair of shoes by Crockett & Jones (who provided the footwear for the film), a vintage Vespa and bottle of Johnnie Walker Blue Label (not at the same time).