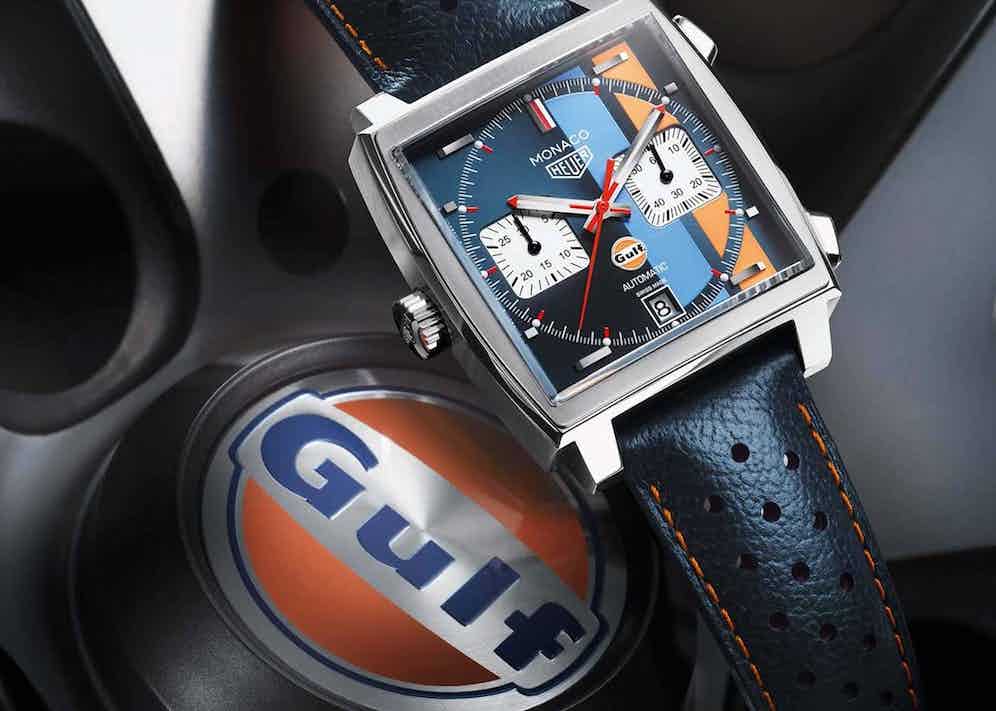 If 1969 is a year that humankind will mainly remember for the Moon landing, back on Earth watch enthusiasts will remember 1969 as the year a standout square chronograph was introduced: the iconic Monaco.

A square, angular, shaped wrist watch the likes of the Monaco had never been seen prior to its introduction. On top of that, the case was made so that the chronograph was water-resistant (a first for a square watch) and the movement powering the timepiece was the revolutionary new self-winding Calibre 11. Calibre 11 is what Heuer (TAG was not yet part of the company name at the time) called the movement, but it might be better known to some as the Chronomatic, which was the self-winding chronograph that came from the consortium formed by Breitling, Buren, Hamilton, Heuer and Dubois-Depraz.

The Monaco’s ultimate claim to fame came when racing driver and Heuer brand ambassador Jo Siffert, the first racing driver to be sponsored by a watch brand, was seen wearing the watch in a race in 1970. Later on, the watch of course received its consecration on the silver screen when it was strapped on the wrist of the king of cool, Steve McQueen, in the movie Le Mans. 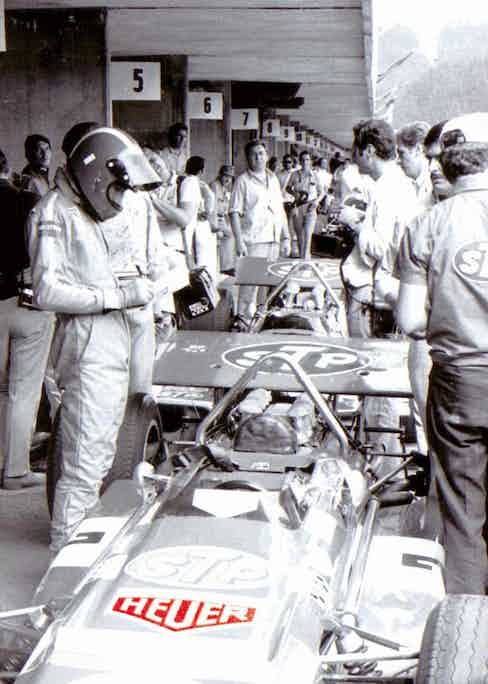 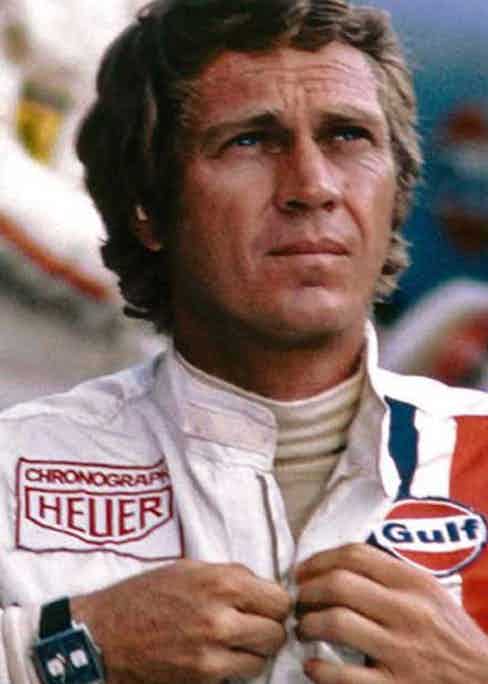 Heuer called the new Monaco in their period advertising materials with a Swiss sense for understatement simply: “Avant-garde. Le seul chronographe automatique carré du monde!” (Translation: “Avant-garde! The only square, automatic chronograph in the world!”) Aligned to the name and very promising was the second tagline: “Monaco — partout a sa place: aussi bien au volant d’une voiture de course formule 1 qu’à la soirée de gala du Casino!” (Translation: “Monaco — has a place both at the wheel of a Formula 1 race car and a gala evening at the casino!”) In the US a graphic explained why the winding crown moved to the left side (automatic and therefore no need for winding).

During the mid ’60s the average watch size was between 34 and 36 mm. Hence the style of the Monaco hit a conservative watch world like a bomb, polarising to say the least, a kind of love or hate relationship for most until today. Beyond any doubt, the design was bold, edgy, with alternating brushed and polished surfaces as well as convex and concave sides. 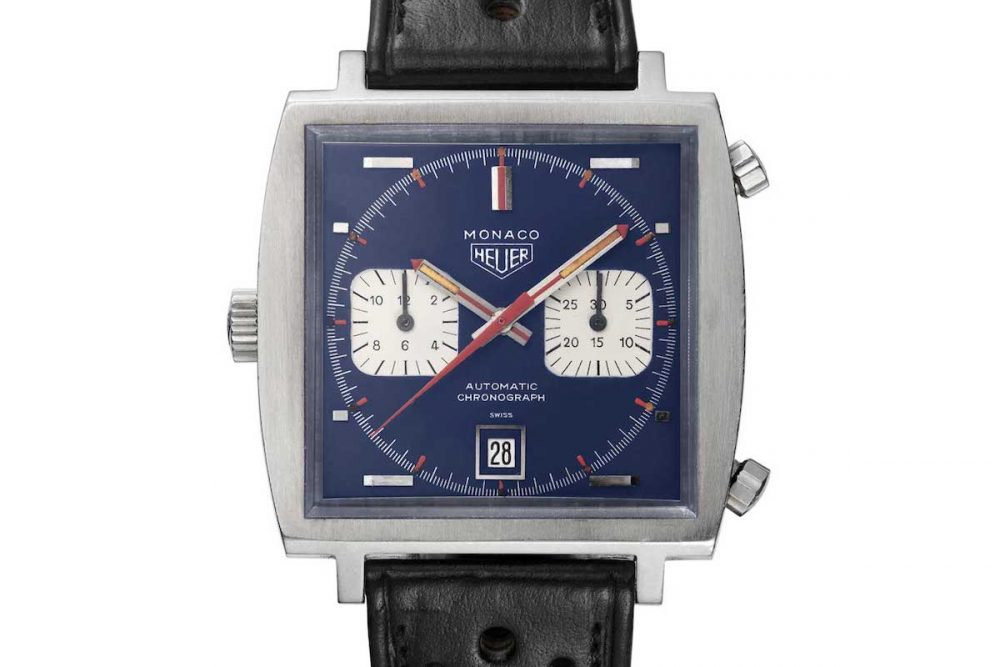 Since its launch in 1969, the Monaco has been released in more guises than we can count, but the one category that will always be associated with the watch is racing. Below we’ll look at three versions of the TAG Heuer Monaco with attractive racing-inspired looks. 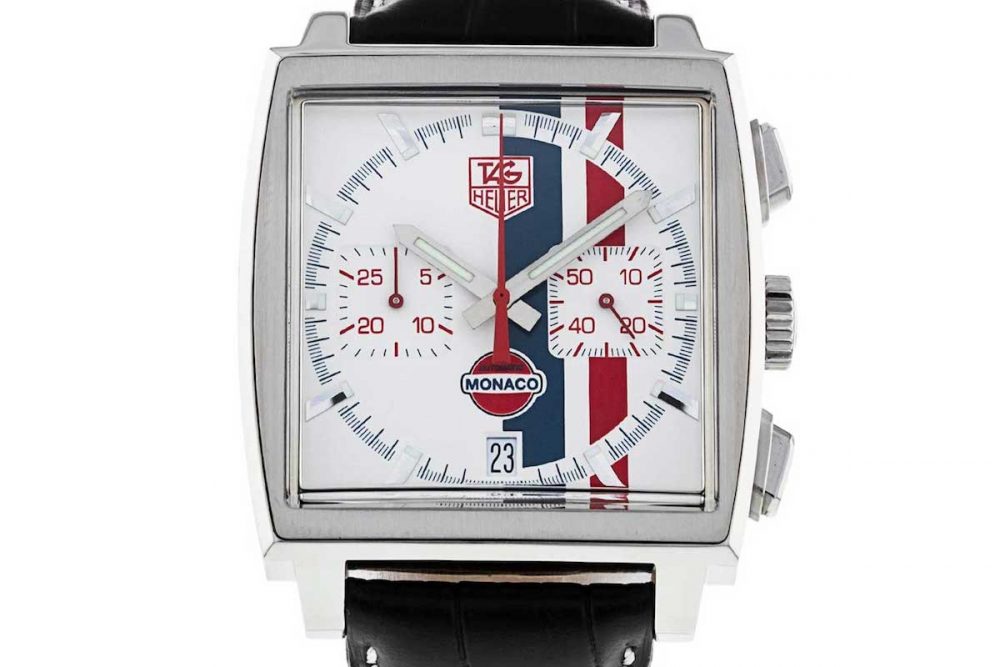 Brand sponsorships in racing create long lasting relationships between entities which in turns can give birth to iconic color schemes and design for racing cars. Take for example John Player Special and the Lotus Formula 1 team, or in our case Gulf Oil and the Porsche 917 driven by Pedro Rodriguez and Heuer brand ambassador Jo Siffert.

Starting in 2005, TAG Heuer released limited edition watches to pay tribute to this partnership with Gulf. The first one was the TAG Heuer ‘Vintage’ Monaco reference CW2118 launched as a limited edition run of 4,000 watches with a white dial featuring red and blue stripes. Of course, one will immediately recognize that the design chosen for this timepiece was inspired by the colors of Steve McQueen’s racing suit in his 1971 movie Le Mans, the movie that would eventually make the Monaco the iconic watch that it is today.

The release also coincided with McQueen’s 75th birthday, and would lead to many more Gulf-branded Monacos. 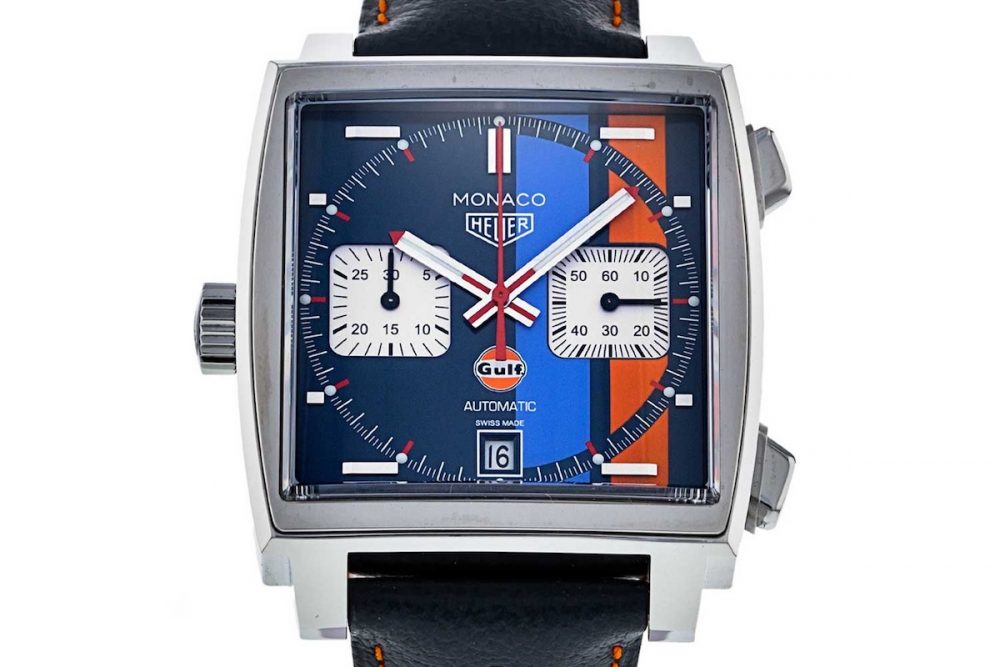 The watch retains the main features of the original Monaco such as the 39mm square case with the crown on the left, the petrol blue dial with two white counters, the red central hand, the date window at 6 o’clock, and water-resistance to 100 metres. But the biggest attraction is of course the blue and orange livery with the Gulf Oil logo prominently displayed on the dial, a nod to Steve McQueen’s Porsche 917k in Le Mans. This special edition is also the first Gulf Monaco to feature the historic Calibre 11 which powered Monaco timepieces dating all the way back to 1969. Another nod to vintage watch enthusiasts, we find here at 12 o’clock a Heuer logo again. What completes the package here is the racing strap with orange stitching. No better watch than this one if you want to shine in the paddocks. 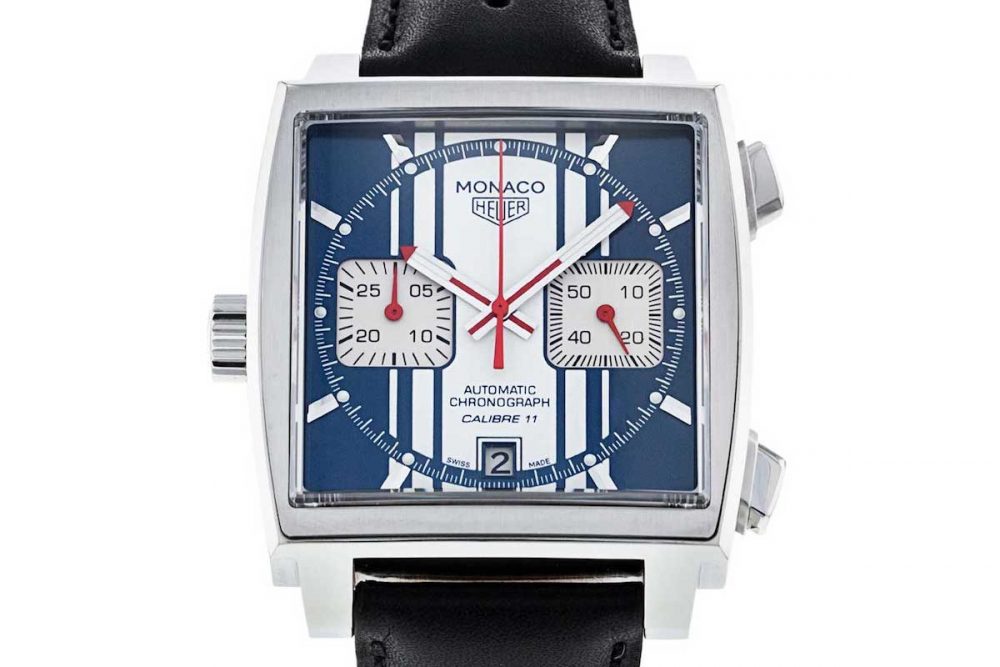 More on the classic side of the Monaco, this Vintage Limited Edition retains all the charm of the original Monaco but with white racing stripes in the middle of the blue dial, just as you would find on racing cars. It is also worth noting that the Monaco that Steve McQueen himself picked to wear in his movie Le Mans featured a blue dial with white sub-dials. If the Gulf editions didn’t suit your need, this timepiece retains all the racing appeal of the original Monaco, the crown to the left of the case, the vintage Heuer logo and of course the Calibre 11.