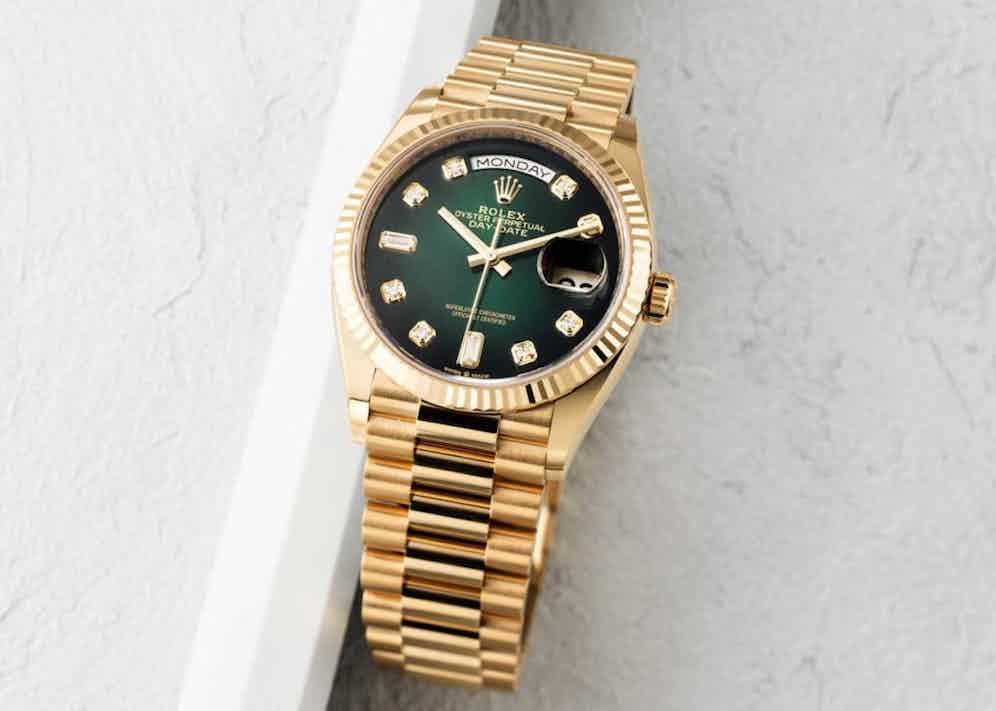 Sitting imperiously at 12 o’clock, burning as brightly as Prometheus’s torch, cleverer than a border collie with spectacles, and capable of speaking 26 different languages, is the day-of-the-week wheel in Rolex’s legendary Day-Date model. However, regardless of which language you choose for your Rolex Day-Date, the watch will identify you as, in Mick Jagger’s perfect description, “a man of wealth and taste”. The model derives its name from its simultaneous display of a fully written day of the week displayed through the aforementioned aperture at 12 o’clock, and a date display at 3 o’clock that is viewed through a magnifying Cyclops integrated into the watch’s crystal.

Early Rolex advertisements for the Day-Date show a pair of impressively dressed guards standing outside a pair of closed stately doors. The ads refer to the type of men who wore the model. “You know their faces from a thousand newspaper photographs… You have seen them and heard their voices on newsreels and on your television screen.” Another ad reads: “It costs one thousand dollars to own the Rolex Day-Date, the watch you so often see on the wrists of presidents everywhere.” It was clear from these messages that Rolex was happily unabashed about the intended audience for this timepiece. 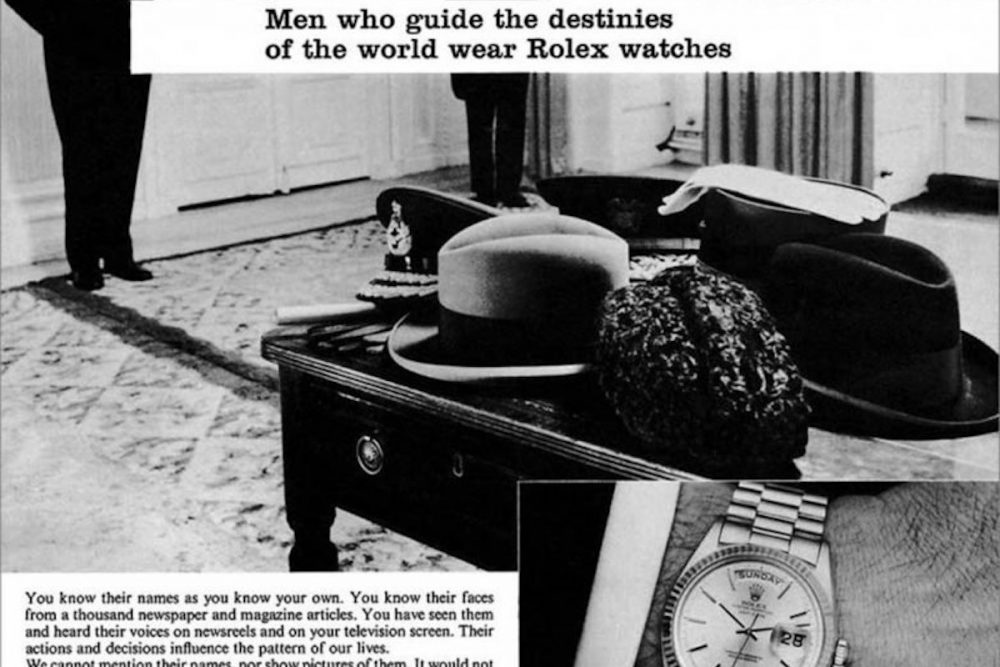 An old advertisement for the Day-Date

The Day-Date – sometimes known as the “President” in collector vernacular, thanks to its adoption as the wrist-swag of choice by Lyndon B. Johnson and, allegedly, John F. Kennedy (the watch apparently having been gifted to him by Marilyn Monroe the same night she sang Happy Birthday to him at Madison Square Garden in 1962, and inscribed, “Jack, with love as always from Marilyn”) – was born in 1956. During its 60-plus years of existence, it has made innumerable cinematic appearances and become a symbol of success, virility, power and alpha-male cool. 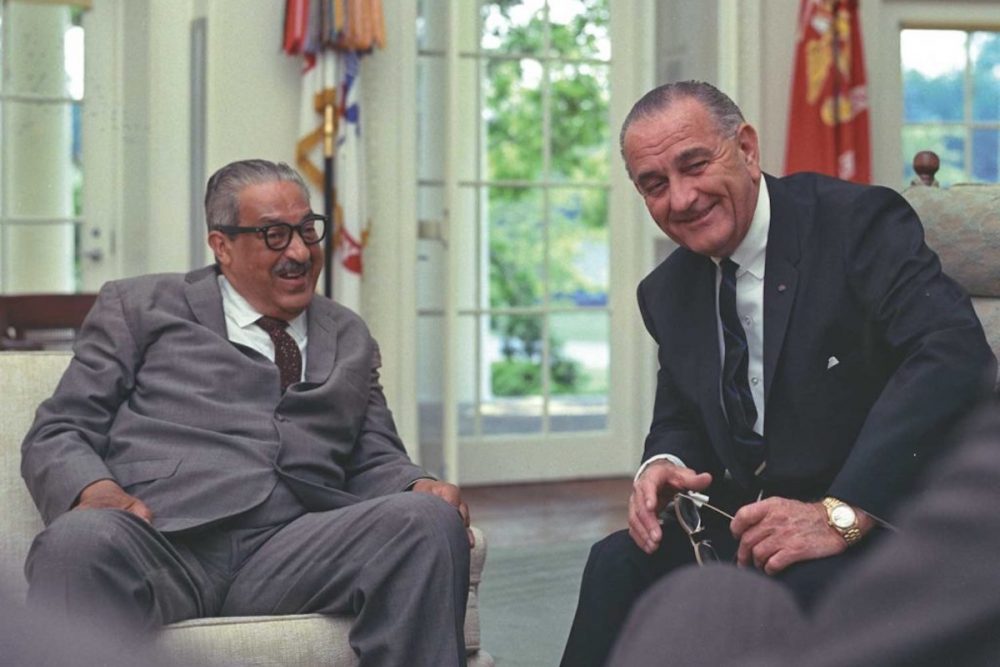 Lyndon B. Johnson was the first US President to wear the Day-Date in office 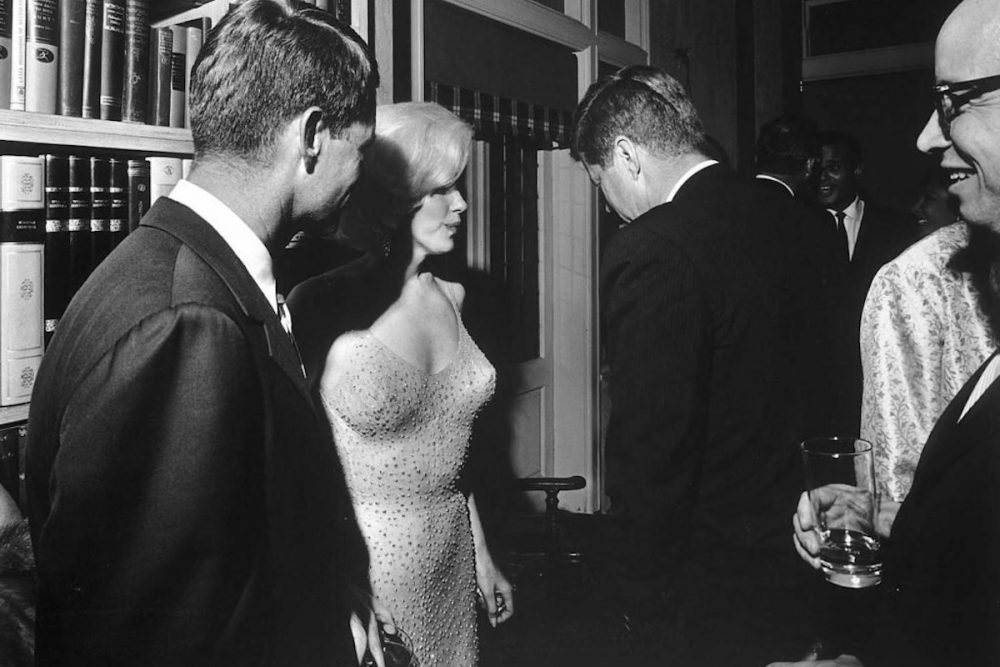 There is no better example than when, in the midst of his infamous “Always be closing” speech, pummelling a group of underperforming real-estate salesmen in David Mamet’s seminal Glengarry Glen Ross (1992), Alec Baldwin unsnaps the hidden clasp on his own yellow-gold, champagne-dial Day-Date and holds it in front of a perplexed Ed Harris saying: “You see this watch? This watch cost more than your car.” The watch is the ultimate exclamation point in this verbal smackdown. Lemmon and his beleaguered peers can only stare slack-jawed at the primal totemic symbol of success and might that is the Rolex Day-Date. 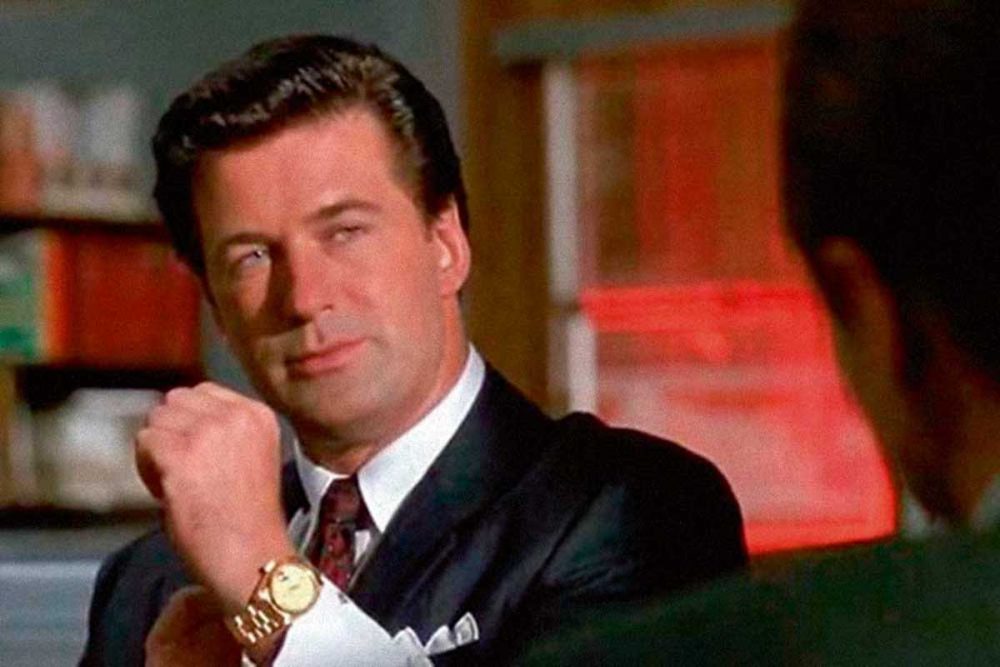 The 1950s was an era in which Rolex had brilliantly asserted its dominance in the tool watch categories. In 1953, it launched the Submariner, which would become the most successful diving watch of all time. In 1954, the brand unveiled the incredible GMT-Master – later adopted by Pan-Am pilots to keep track of two time zones simultaneously while in flight, it was the world’s first dual-time wristwatch.

But in 1956, Rolex wanted to create something different, a timepiece that asserted its ability in the world of ultra-elegant timepieces. Which, refracted through Rolex’s sensibilities, did not mean a small, dandy’s dress watch but a large (36mm), precious-metal-only chronometer with all its iconic robustness characterised by a screw-down crown, water resistance to 165 feet, and fitted with a precious-metal bracelet. The first references launched were the 6510 and 6511; they lasted only a year before being replaced by refs. 6611, 6612 and 6613, which featured a Calibre 1055 with an all-new free-sprung balance wheel with Microstella regulated screws. This new movement resulted in the watches receiving official certification as chronometers; the dials now read “Superlative Chronometer Officially Certified” (instead of “Officially Certified Chronometer”, as appeared on the 6510 and 6511). 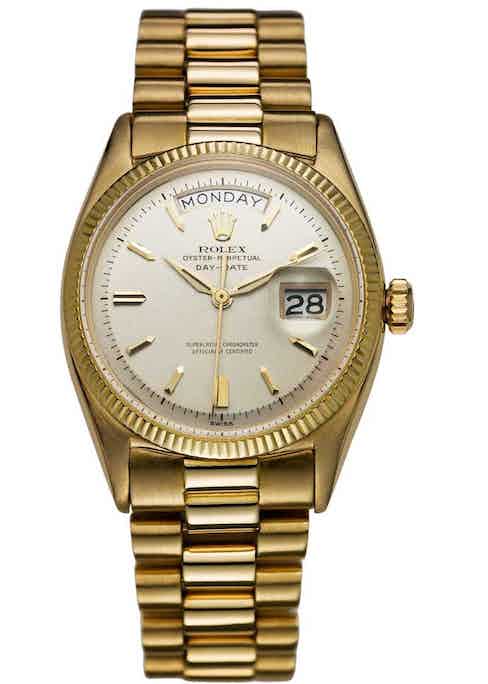 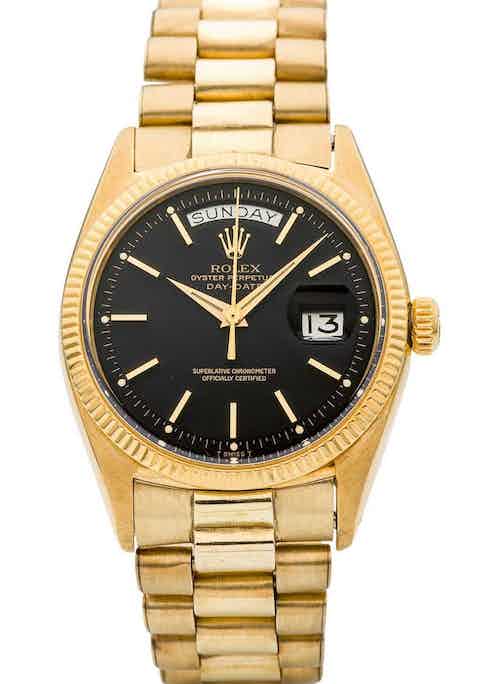 The beloved 1800 family of watches was introduced in 1959. Of these, the 1803 is arguably the most famous. These watches were initially fitted with the Calibre 1555, replaced in the mid-1960s by the Calibre 1556, which featured a faster vibrational speed. In 1959, according to Rolex mythology, a total number of just six steel 6611 watches were made. Although other steel models are known, the tiny number from 1959 makes these the holy grail of Day-Dates. It is not clear whether they were commercially produced models or prototype watches made for internal use that eventually found their way to the market. I’m inclined towards the latter, but there is no definitive answer. In 1969, the Day-Date added a “concealed clasp” to its distinct bracelet, known as the President bracelet. 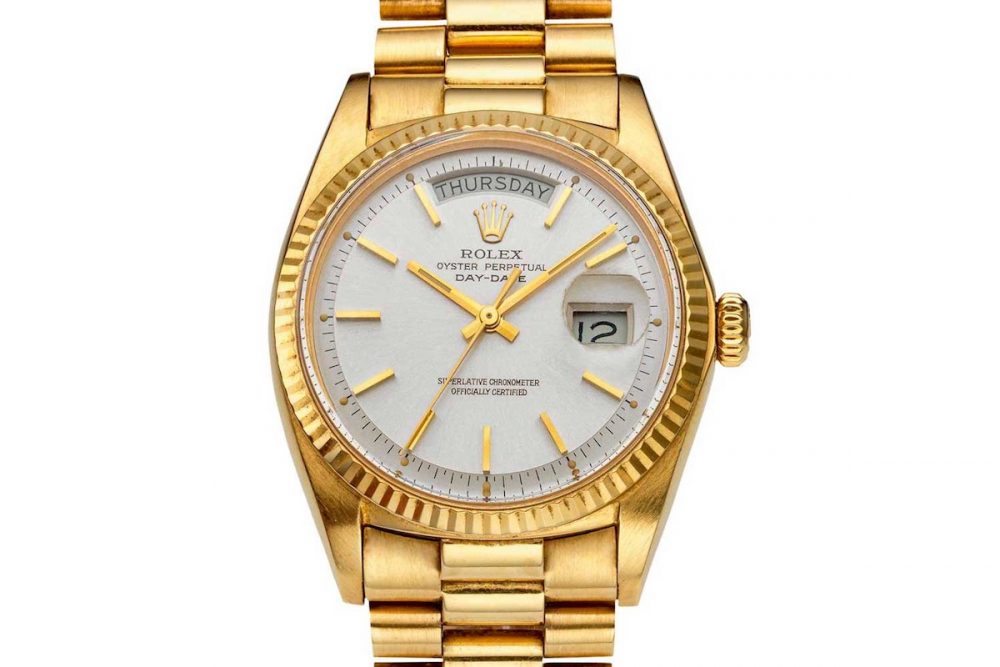 The 1970s was a period of strong technical advancement for the Day-Date. In 1972, the Calibre 1556 in the Day-Date became equipped with a hacking feature that meant the seconds hand would stop when the crown was pulled out. The watch was also fitted with a sapphire crystal around this time. In 1977, a new Calibre 3055 was fitted to the Day-Date, and the reference numbers for the watches grew by one additional digit: 18xxx. The key advantages to the Calibre 3055 were a 4 Hz vibrational speed for better autonomy from micro-shocks, and an all-important quickset function for the date. Before this, the date and days of the week could be adjusted only by turning the central hour and minute hands through the entire calendar cycle. 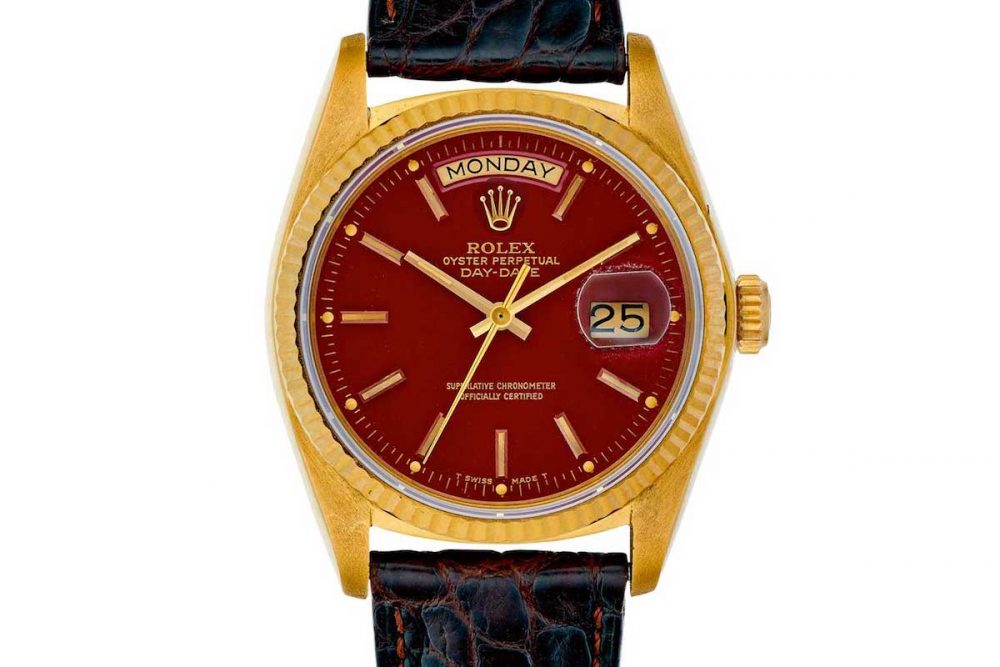 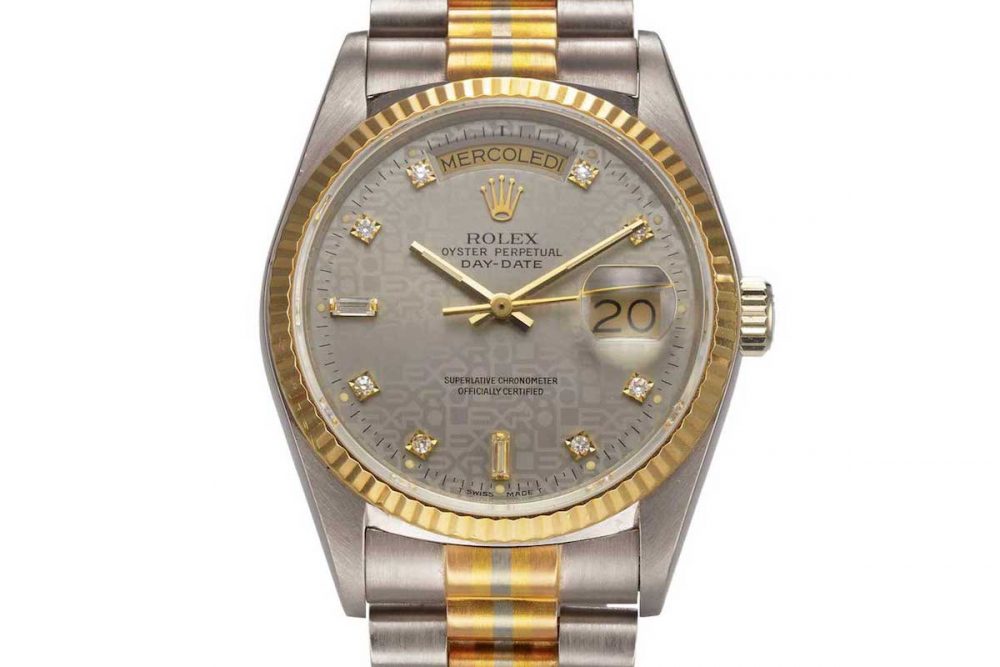 In 1988, Rolex unveiled the new Calibre 3155 for the Day-Date, which was something of a revelation, because for the first time the model had a double-quickset. This meant that both the days of the week and date could rapidly be set using the crown, independent of the hour and minute hands. Reference numbers for the model became 182xx and 183xx (for models with diamond-set cases). 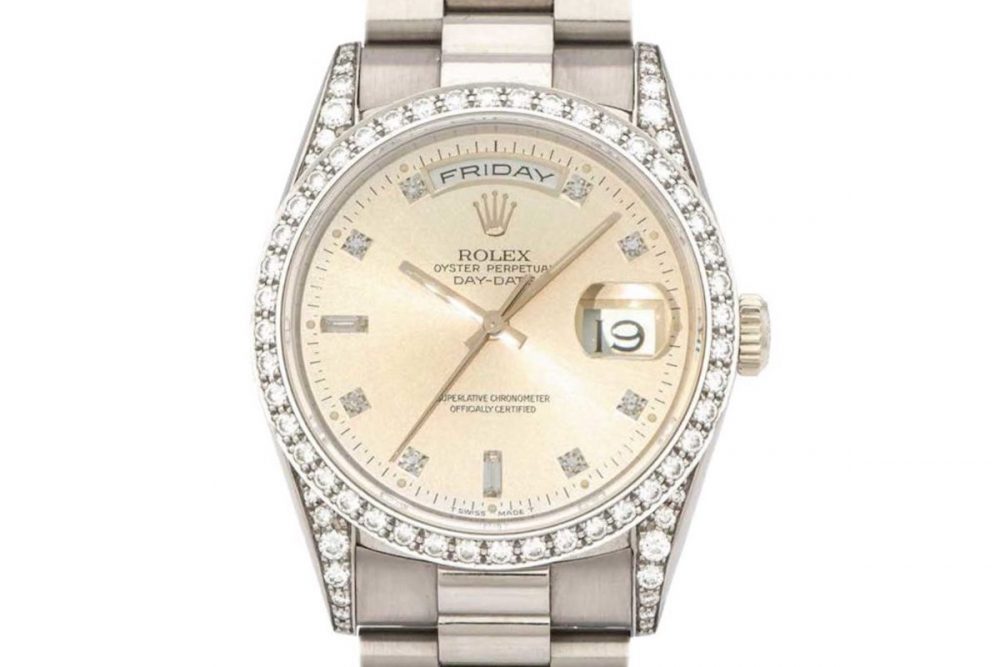 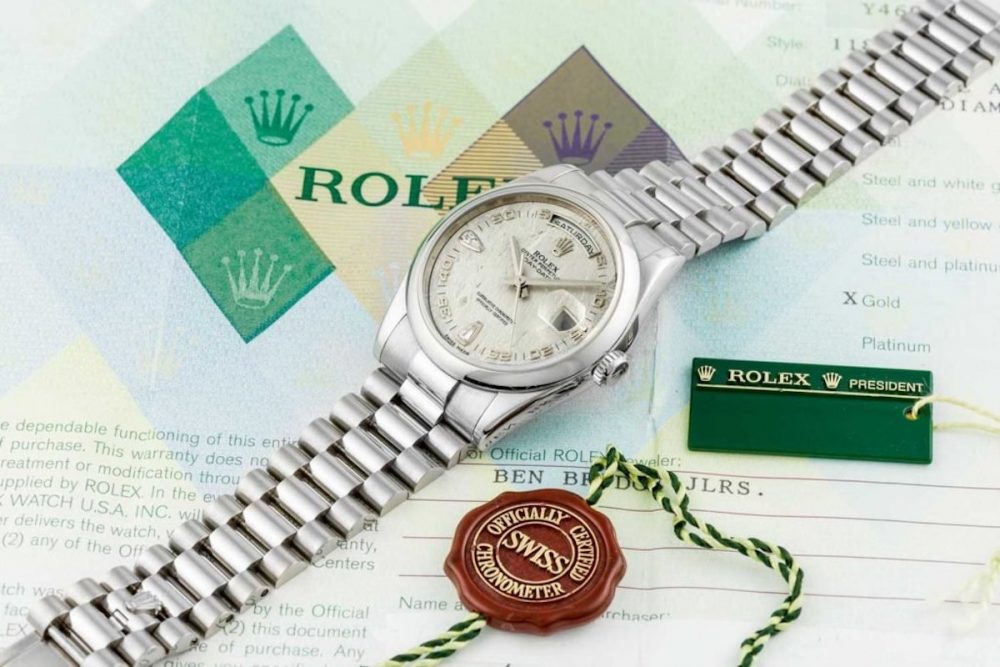 The current collection Day-Date 36 coloured dials were introduced in 2013. These modern Day-Date 36mm watches are each fitted on alligator straps of complementary hues and these charming watches offer infinite chromatic expressive possibilities. It should be noted that one of the world’s ultimate rakes, the style panjandrum Nick Foulkes, wears the 36mm yellow-gold model with antique wood dial with unabashed aplomb.