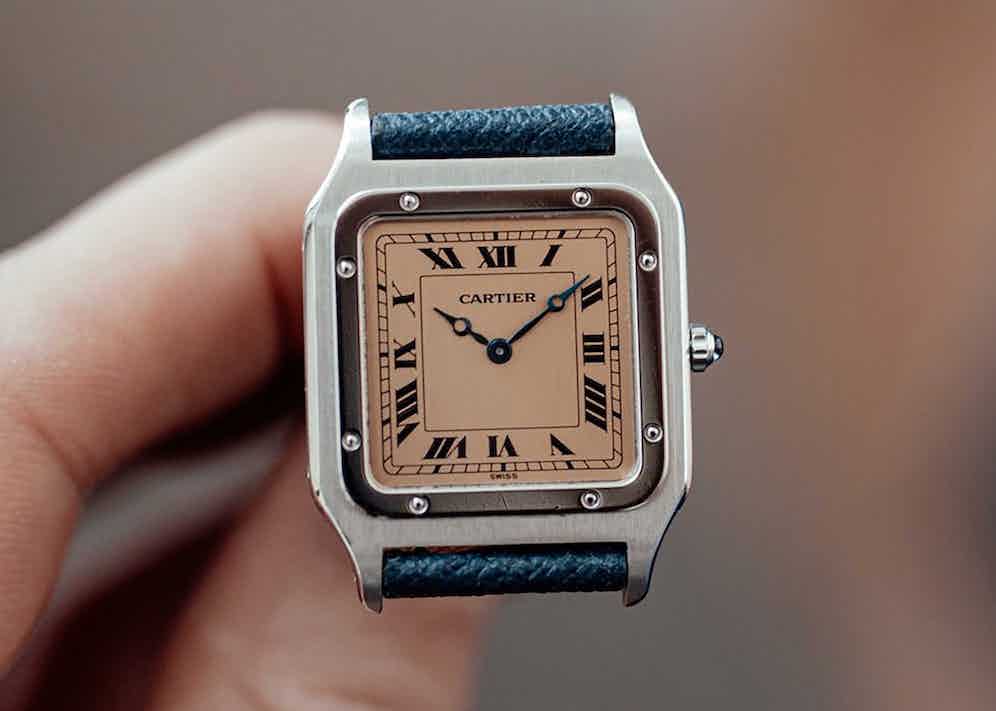 Cartier has been well-known for decades, especially amongst royalty and collectors of fine objects, for its jewelry and Tank watches. But it was only in the 1980s that Cartier made a real breakthrough to become well-known to the general public. A possible reason why this had taken so long to happen, is that Tank watches, and also others like the Santos, Tortue or Tonneau, were always made in gold or platinum and, therefore, were not always within reach for everyone.

But a change in the maison’s vision in the late 1970s made Cartier accessible to a larger audience. In 1978, the gentleman who was appointed as Marketing Manager of Cartier at the time, Dominique Perrin, came up with a clever idea of launching an affordable sports watch, based on the legendary ‘Santos Dumont’. The watch needed to appeal to a younger crowd and fit a variety of lifestyles. 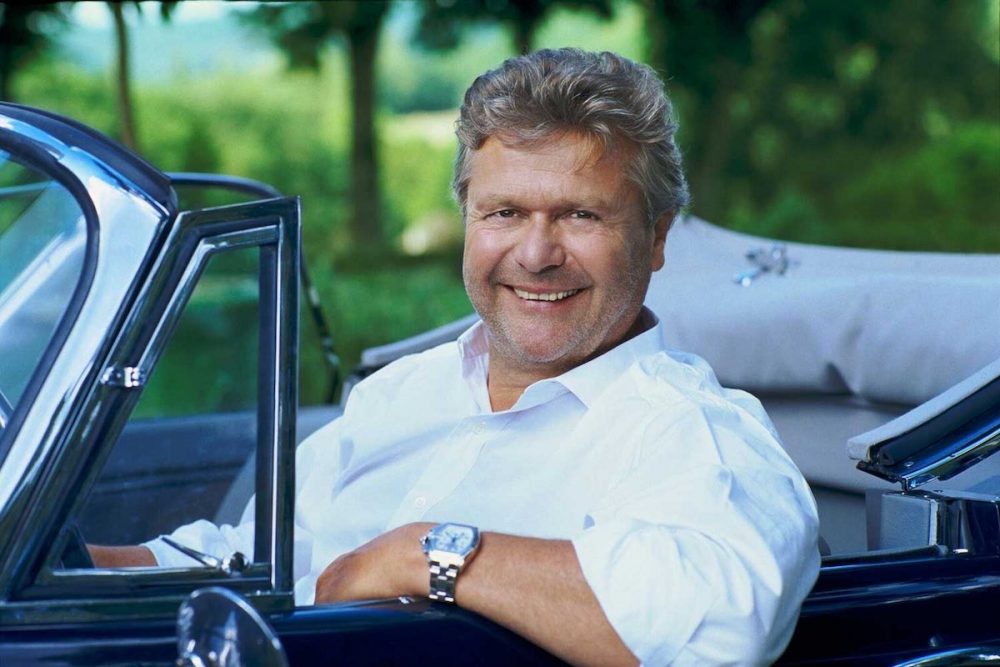 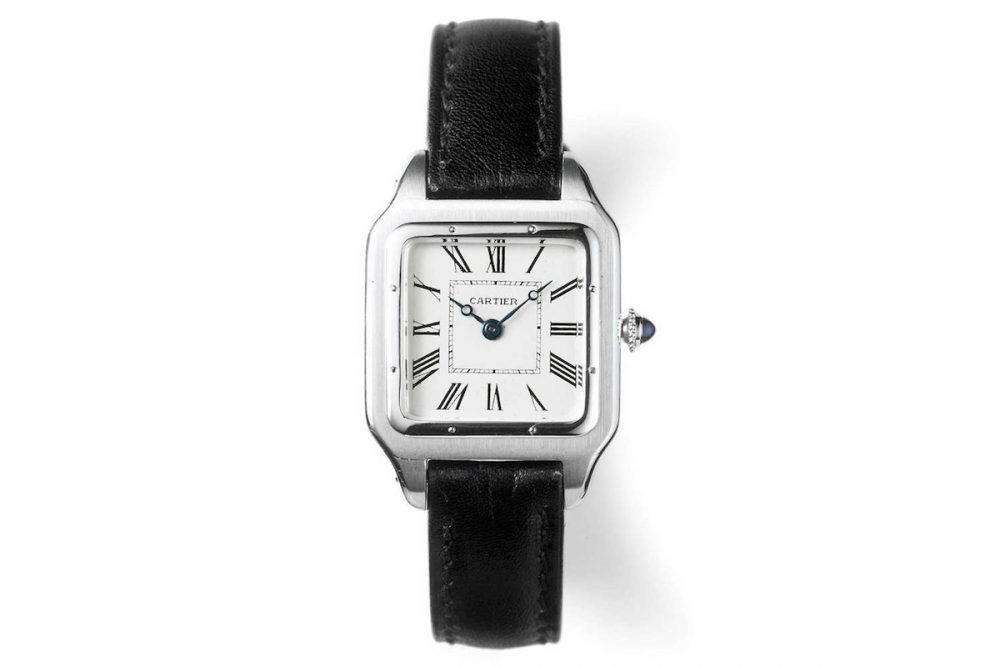 An example of the Santos Dumont from 1916 (Image: quillandpad.com)

The answer was steel, a material Cartier had not worked with before for watches. However, in order to give the new watch a sense of luxury still, Perrin and his team decided to launch the model in steel with gold accents. A daring combination, since the mix of steel and gold was not common at all, at that time.

Cartier was one of the first companies to spearhead this new trend. So, the Santos was actually born to be a two-tone timepiece. The screws on the bezel and the screws on the bracelet of the watch, in gold, were the right elements to highlight the combination of these two metals. There have not been many timepieces since, even at Cartier, that look so good in two-tone as the Santos. 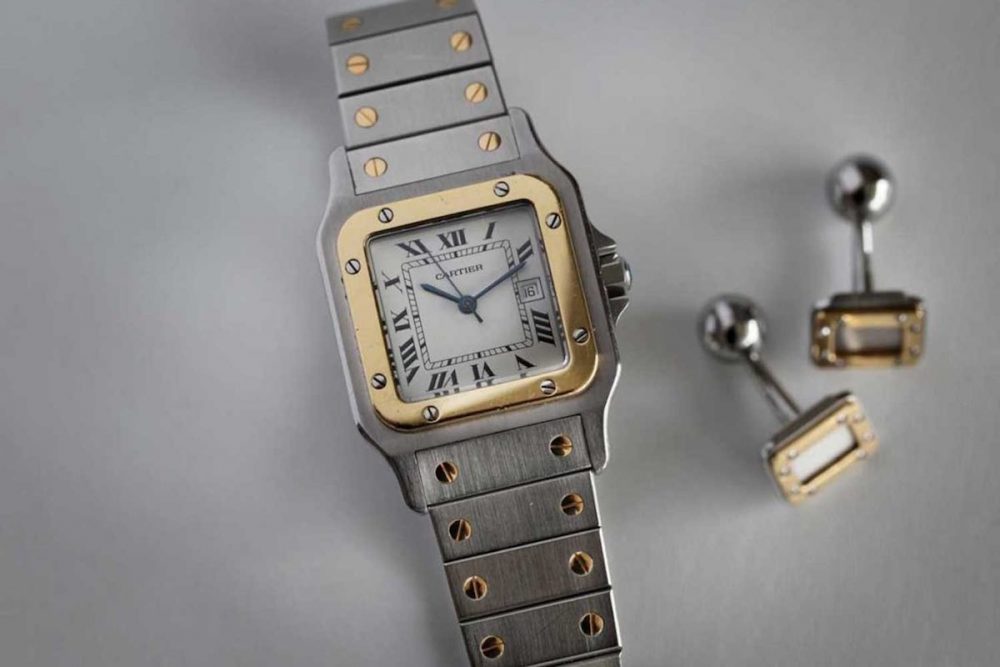 To be precise, the launch of Dominique Perrin’s creation occurred in 1978 on the 20th of October. It took place in the Musée de l’Air in Paris. And what a great choice that was, to organize the Gala over there. Since this is the place where the airplane of aviation pioneer Alberto Santos-Dumont, named Demoiselles, can still be found. The Santos went on to become a huge success and turned into one of those watches that you had to have.

Shortly after, an all-steel model was released that increased Santos’ popularity, quite substantially. Fame, however, also has its downside and it did not take long before the first copies of the watch flooded Europe and the US.

This new problem was almost impossible to beat. Despite the fact that Cartier launched different versions, like a Moon phase model, a round, an octagonal model and even a chronograph; the classic Santos was the most copied watch in the world for many years.

In 1987, the Santos was drastically revised, renamed and relaunched as the Santos Galbée. The case lost its boxy looks and became more curved, smooth and a better fit on the wrist than the original Santos. 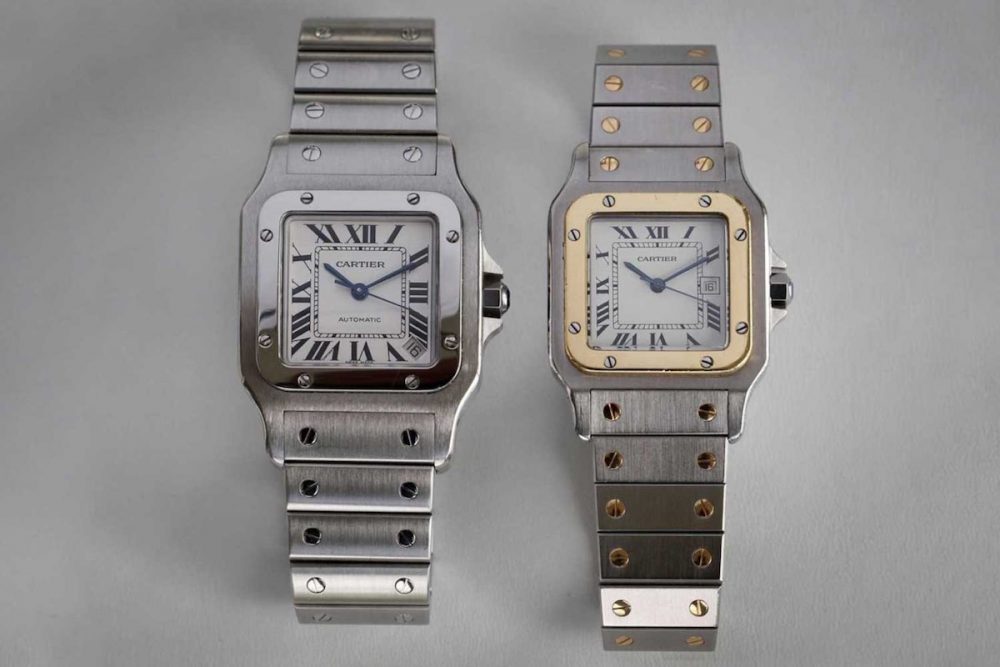 Most models were powered with a quartz caliber, but there were exceptions, like this limited edition with grey dial, version that was supplied with the 2000 calibre. 2000 pieces were made with the grey dial and 2000 more with a light blue dial. Almost none of them have found their way to the second-hand market yet. The last change was the introduction of the Santos Galbée XL, in 2005. 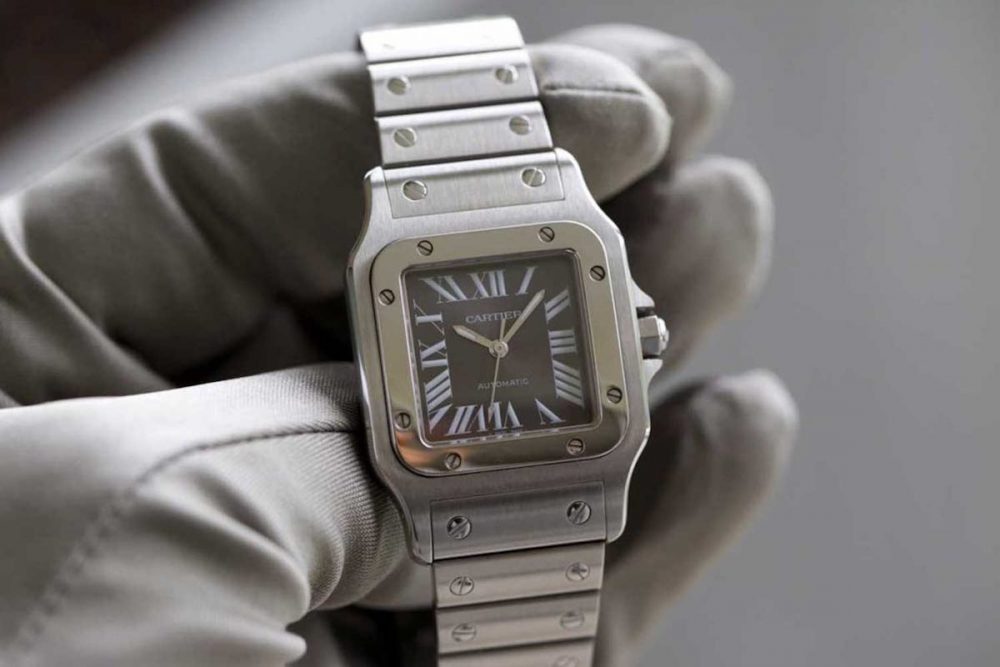 The larger dimension of 32 x 45.5mm was a result of a strong demand for larger watches. The XL was an automatic watch, with an ETA 049 caliber. For the first time, the cut out for the date window did not occupy the number 3 or number 6 and was ideally placed between the numbers 4 and 5. This was a huge visual improvement. 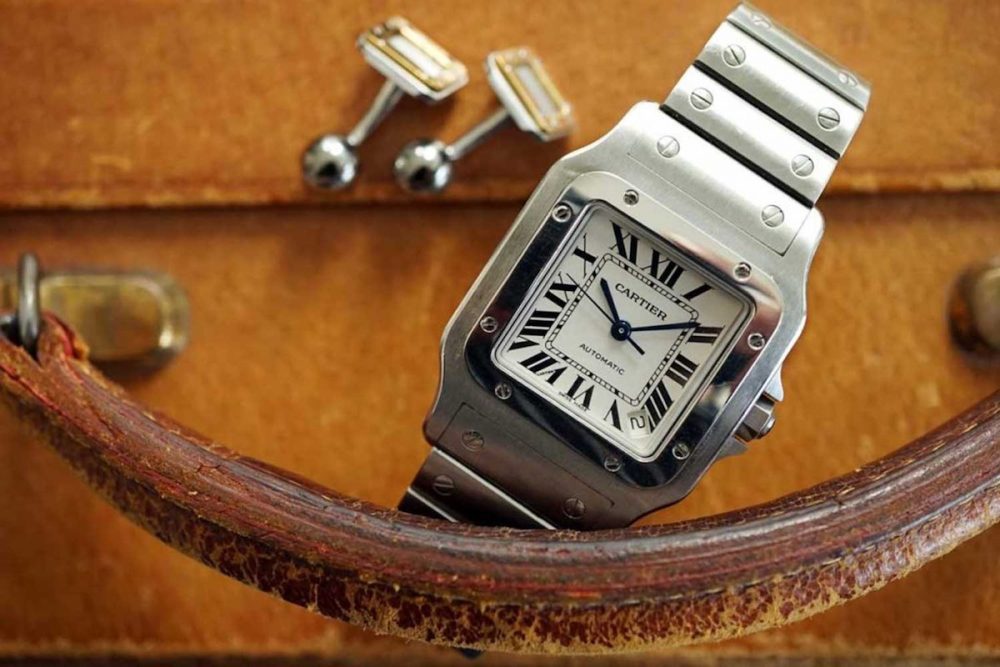 From an aesthetic point of view, the XL is — or was — very well balanced and was, possibly, the best-looking Santos since its introduction. The name Santos Galbée has become, in the meantime, the common name for all Santos watches, but in fact, only the models made after 1987, were Galbées.

Around 2016, there was some ruckus in the public media and questions even popped up on my Instagram account, asking why the model had disappeared, from the official Cartier websites. This was a first, since it was introduced in 1978. The watch became sold out at boutiques and was not being produced anymore. A fact that not many understood, since this was one of Cartier’s most famous watches; a legend and a pillar of Cartier’s watchmaking efforts.

This was however the period of silence; the period that the Cartier team needed, to take the Santos and all of its many varieties, to create an updated version suitable for the present day and one that will be able to stand the test of time for many more decades to come. 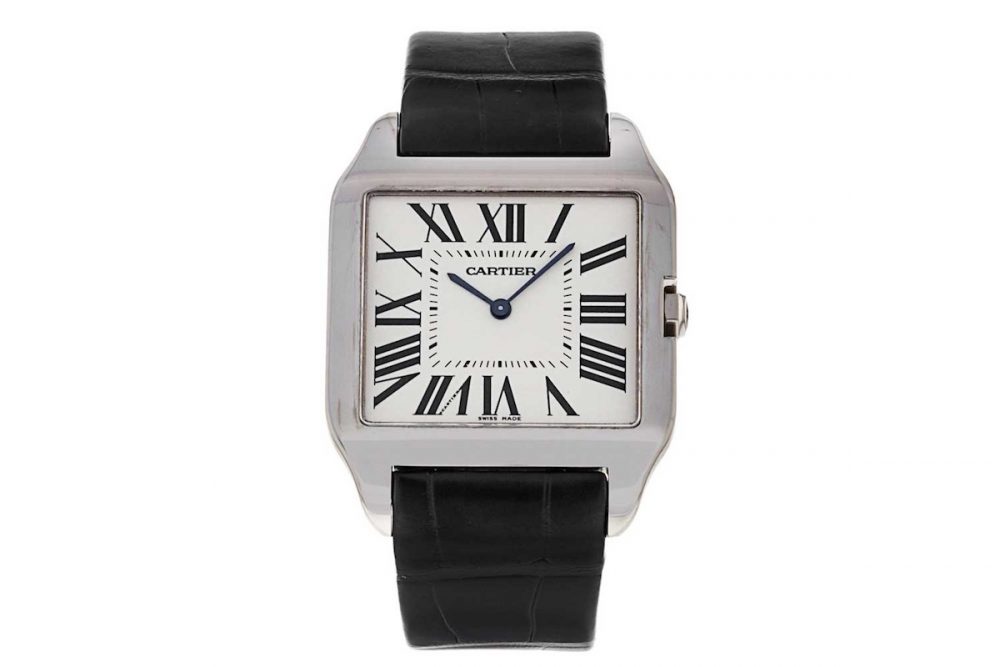 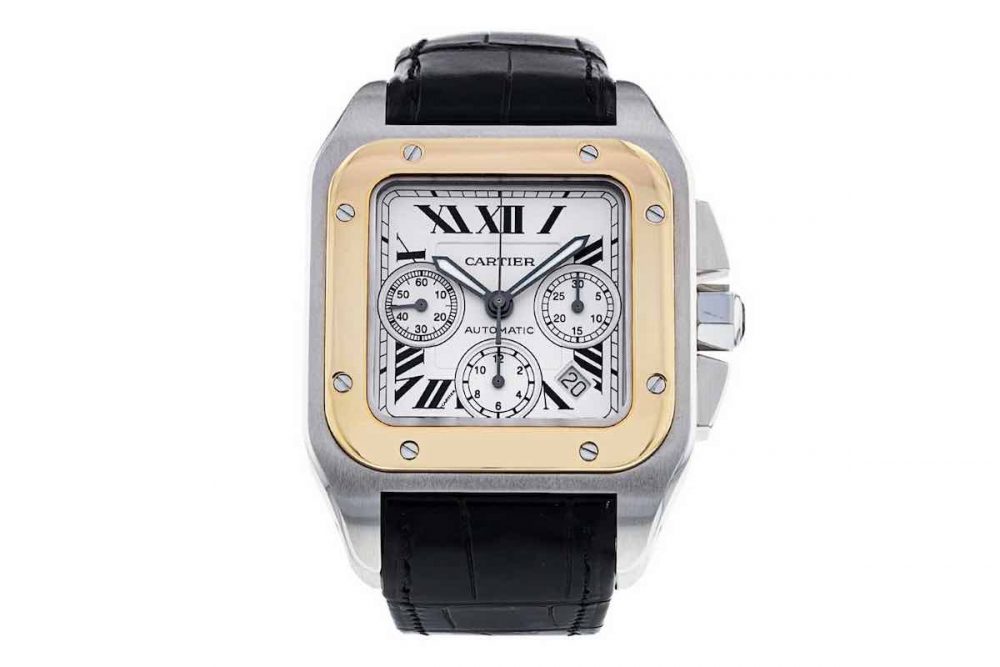 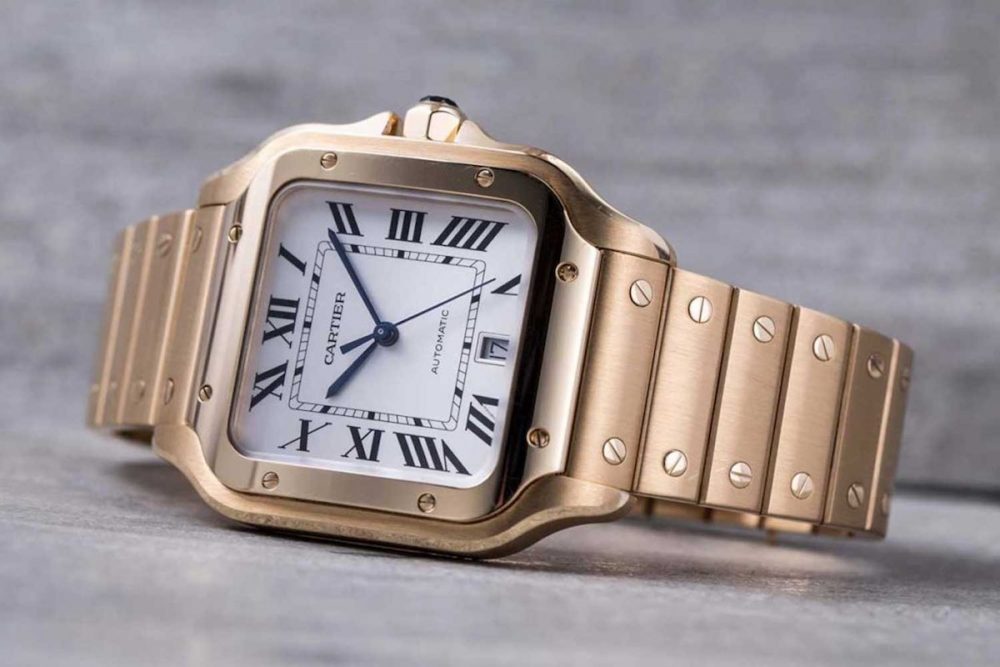 Then, exactly forty years after the initial introduction of the Santos, Cartier gave the watch its rightful welcome back into the catalogs at SIHH 2018.

The 2018 collection of Santos watches came in a medium (35.1mm x 41.9mm) and large (39.8mm x 47.5mm) size, with an all steel, all gold (yellow or pink) or two-tone (yellow gold and steel) case. The large ones had a date window at 6 o’clock; none on the medium ones. And, given the originally intended versatility of the Santos, the different case types were fitted on a matching metal bracelet or on a calf or alligator skin strap.

For those looking for something extra, Cartier made a skeleton version of the large sized Santos in steel and pink gold, which showed off la maison’s knack for skeletonized movements. Both these versions came with matching metal bracelets. 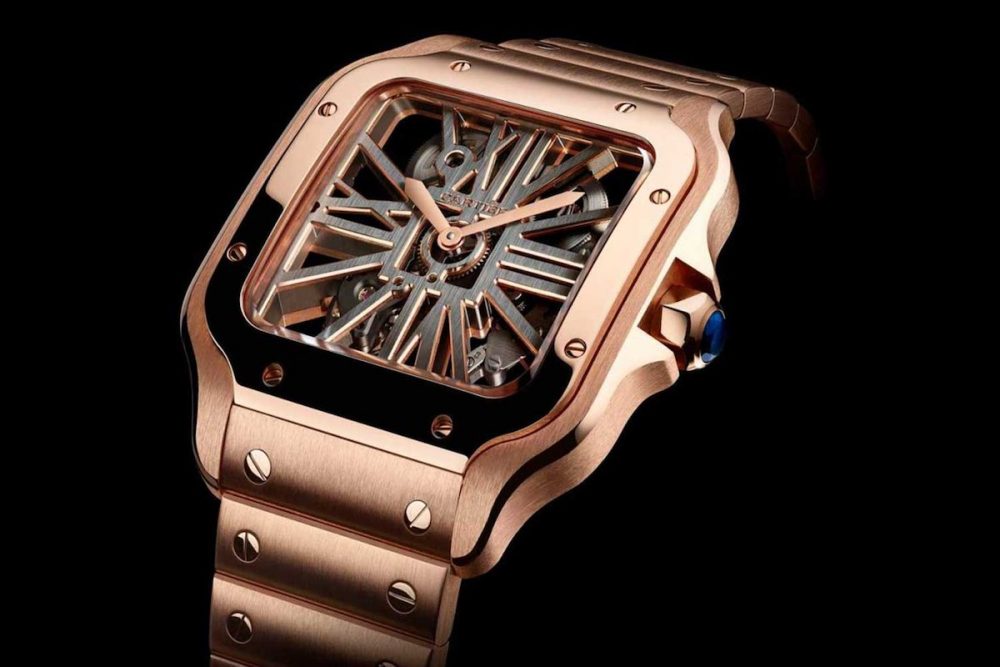 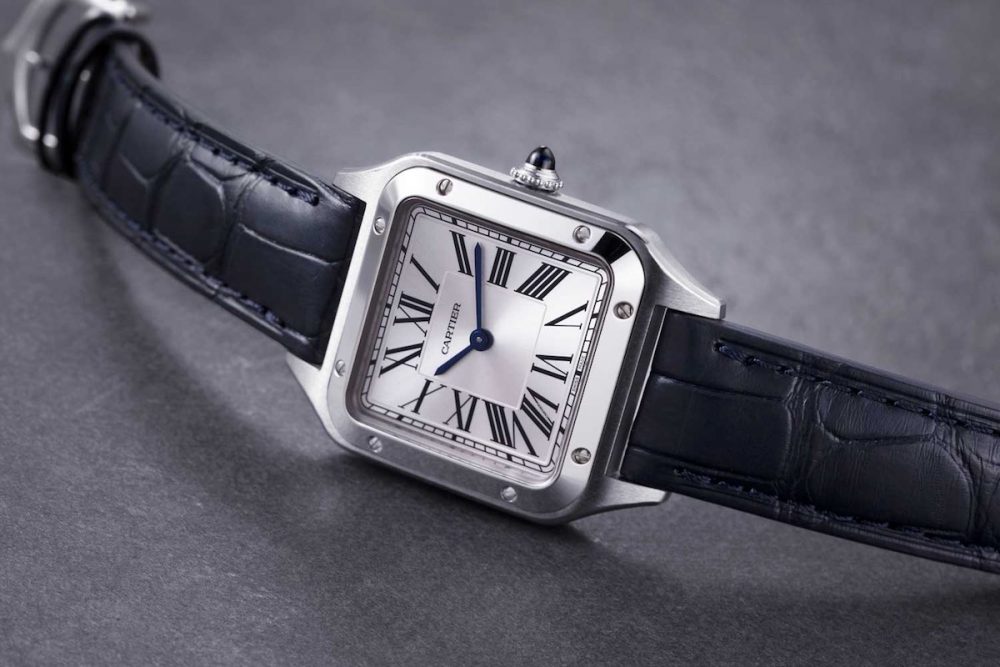 The 2019 Cartier Santos-Dumont Watch, measuring in at 31.4 x 43.5 mm, in stainless steel; powered by a quartz movement; interesting to note that since its reintroduction in 2019, the bezel of the Santos-Dumont features small screws as opposed to rivets (©Revolution)

Aesthetically, the Santos-Dumont Watch of 2019 was sharply defined, like quality men’s tailoring, yet retaining a robust sensuality in its curves. In addition to automatic three-hand and chronograph models, as well as a skeletonized range, 2019 offerings in the Santos line included the Santos-Dumont, powered by a “high autonomy” quartz movement that keeps ticking for six years! 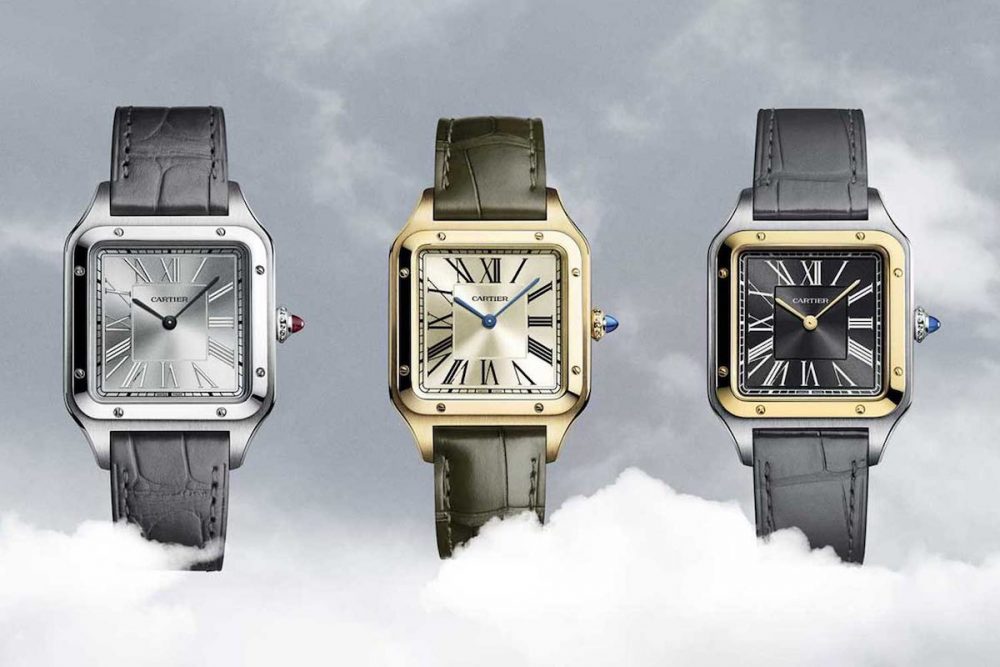 Then last year, paying tribute to the legacy of Alberto Santos-Dumont’s effusive charm and immaculate style, the brand introduced four special limited-edition models, each inspired by his aviation creations, without which the Cartier wristwatch may not have come about until much later. Each of these 2020 watches was powered by the Calibre 430MC, a mechanical hand-wound movement.

Over the years, there have been several variations of this icon. Through our partnership with pre-owned specialist Watchfinder, we have added two enticing pieces from this collection to our shop. One is a Santos 100 model from 2007 and the other is a Santos Dumont from 2011. The present example of the Santos 100 is a two-tone watch in 42mm with hours, minutes seconds and chronographs functions. The watch is equipped with an automatic movement and is water-resistant up to 30 meters. This piece looks as good as new with no signs of wear and tear. It also comes with a two-year warranty from Watchfinder and the original papers. 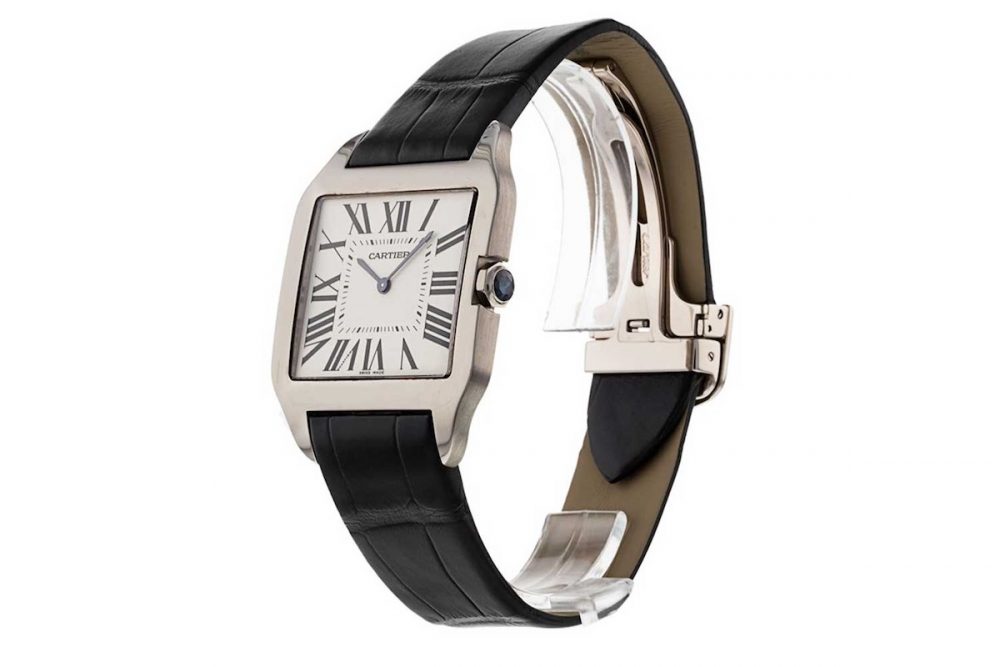 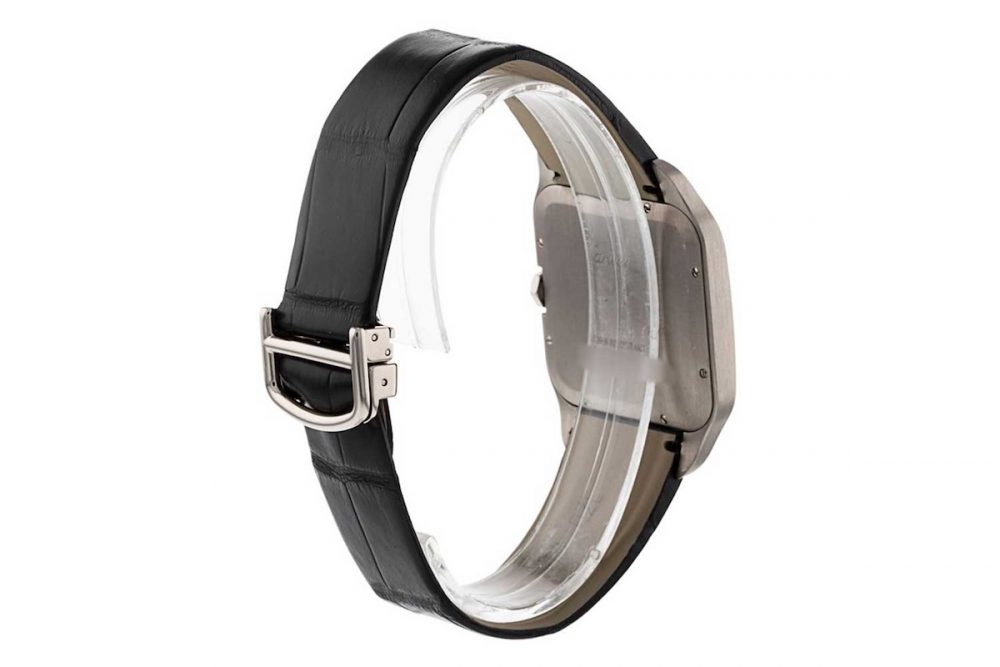 The latest example of the Santos Dumont at our shop is a model 35 mm men’s watch in white gold. It comes with a 16-months warranty from Watchfinder and the original box. 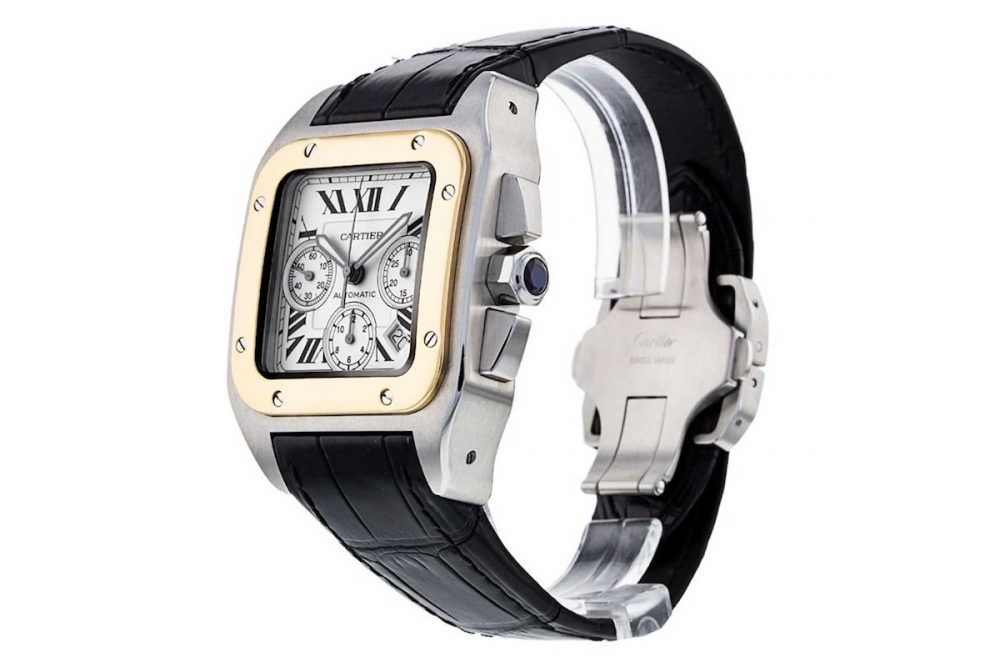 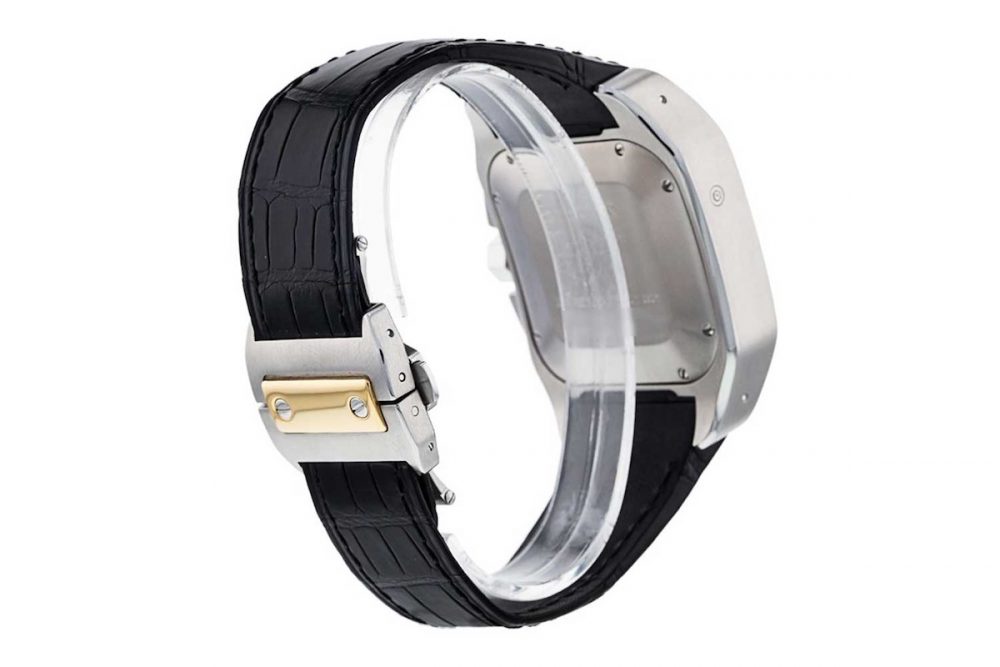 Editor’s Note: The featured image used in this story was used courtesy of mrwatchley.com