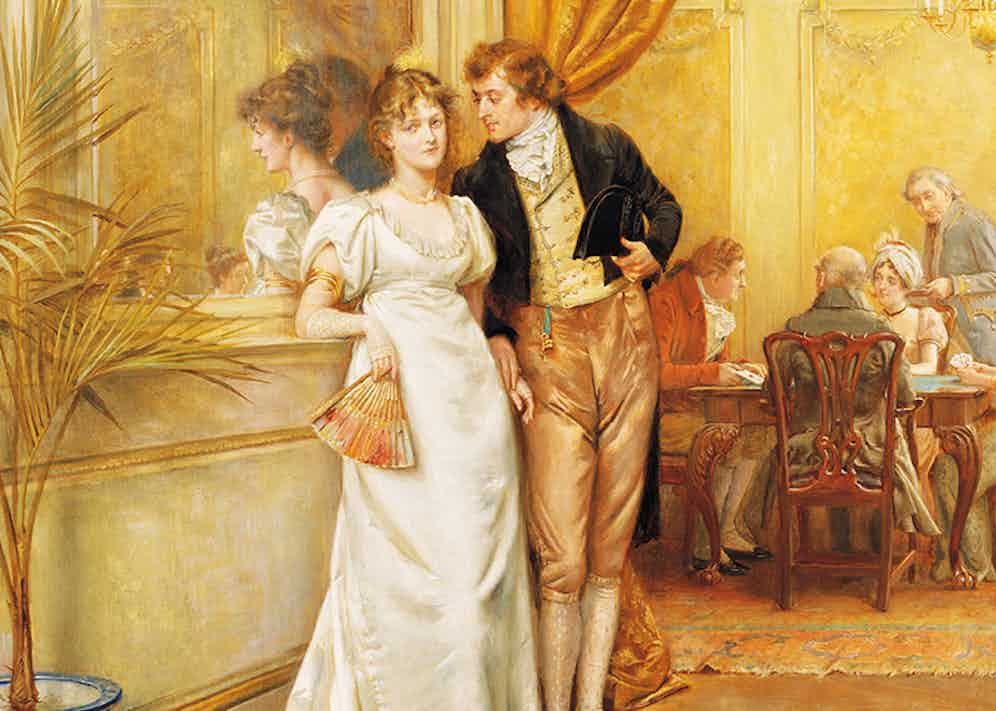 The Ricky Gervais movie, The Invention Of Lying, is set in a parallel universe that is utterly devoid of deceit. Banks accept customers’ word on what their balance is. Advertising posters read: “Pepsi — when they don’t have Coke”. Even politicians ply their trade with artless candour.

The scene neatly demonstrates that flirtation is essentially a disingenuous enterprise. Yes, just as male hippos woo the fairer sex by using their tails to spray their own faeces at them, us supposedly civilised Homo sapiens are just as guilty of crap dispersal when it comes to our own mating rituals. (Not convinced? When did you last witness a male of the human species sidling up to the female, leaning towards her ear and confiding: “I simply cannot help entertaining the idea of fornicating with you this evening. What say you?”)

So does the sham inherent in flirtation undermine its role in society? Absolutely not. Like tact, spin, propaganda, promotion and a whole host of other social mores that humans have built up since we became cognitively able to manipulate truth, flirtation resides in the core of an existential Venn diagram where human nature, in all its deviousness, overlaps with human protocol — in all its artifice.

And so, handled the correct way, a certain degree of artfully spun sexual tension lubricates — in an emphatically symbolic sense of the word — human relationships, improving your rapport with a business associate, existing or future, just as it can with a potential bedfellow. (A tip for any homo-sceptics raising an eyebrow here: several women have independently told this writer that they are attracted to men who are comfortable flirting with other men, as it implies not only liberal bonhomie, but also comfort within one’s own sexual skin.)

Like those other less-than-candid tendencies of socialised humanity, flirtation needs to be executed with guile, subtlety and panache. It should be kept out of the office (the unwritten inter-colleague rule book changes drastically in bars, restaurants or at other external gatherings and events). Moderation is key: your smile — a tool as indispensable to the flirt as the racquet is to a tennis player — should be gently mischievous rather than leery or entreating, both on approach and during conversation. Think Robbie Williams over Albert Steptoe. A slight squint can add irresistible sparkle to the effect, but if overdone, she’ll think you’ve mistaken her for a long-lost auntie. Similarly, when trying to draw her attention, a three-second gaze-hold is optimum. Gaping at her like a lovesick guppy fish will only induce feelings of indifference, at best (pity, at worst).

When it comes to approach — assuming for the moment that your subject is a stranger, rather than a business acquaintance or colleague — Joey Tribbiani, the serial philanderer from the sitcom Friends, is probably bang on the money with his catchphrase (accompanied by a six-billion-dollar beam): “How you doin’?” Simple, warm, inclusive. Chat-up lines, conversely — even ones so sharp you could shave a giant cactus with them — should be confined to the pages of those quirky little toilet-cistern books that crass-humoured aunties buy your dad for Christmas. Besides the obvious tawdriness, they also break one of the Golden Rules of male flirtation: that of ambiguity. To hell with the misogynistic overtones — there’s no greater aphrodisiac among womenfolk than uncertainty over a man’s interest, which is why switching regularly between warm eye contact with her and regular glances around the room at the other prey on offer will keep her investing in her side of the bargain that is mutual pursuit.

Once in conversation, the wise wooer simply sticks to subjects he knows — women are better lie detectors than any polygraphic contraption — and makes her feel like the funniest, best-dressed and most interesting woman on the planet, while also applying a liberal sprinkling of non-sexual humour. (“My friends call me ‘Punto’, because my name’s Phillipa Hunt,” I overheard a lady remark at a business lunch recently; “Thank heavens you weren’t christened ‘Claire’,” deadpanned my office-joker colleague, in a fit of mood-souring impropriety.)

As with facial expressions, posture should be emphatic and unequivocal, but there is such a thing as overdoing it. Standing tall with your shoulders back is stately and dignified; puffing your chest out like your nipples have been threaded to an invisible winch reeks of arrogance. Similarly, nudging the end of one’s nose into what might mutually be agreed to be a lady’s personal space is capriciously endearing; actual physical contact, on the other hand, turns harmless flirting into an actual amorous advance.

The central pillar in the psyche of the accomplished flirt, though, is surely indifference to the results. Aloof, rhino- skinned apathy is the key raw ingredient to charisma, and is perhaps best achieved by keeping in mind a salient line in John Gay’s Augustan drama The Beggar’s Opera: “The coquets of both sexes are self-lovers, and that is a love no other whatever can dispossess.” A come-hither wink to that, say I.