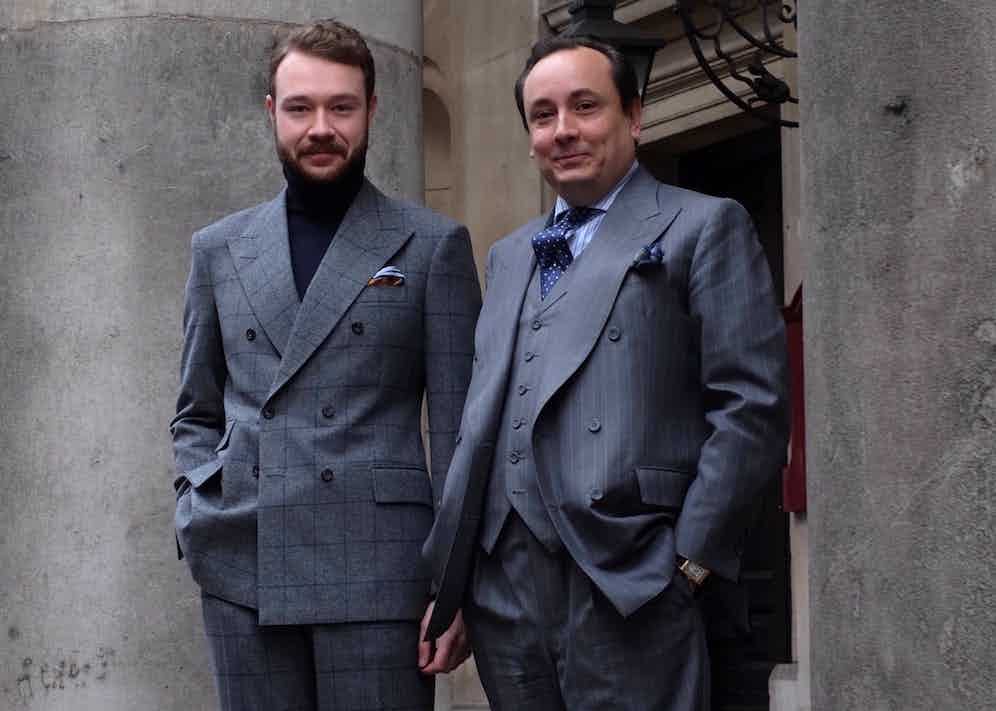 As a general rule, I’ve always gravitated towards tailors of the architectural persuasion. There’s something about jackets with armoured chests and strong shoulders that makes me want to walk that little bit taller; soft lines, lightweight coats and floaty fabrics are not my thing. It might also surprise you to know that I’m a deeply stubborn so-and-so and a misanthropic creature of habit. When I find something I like I tend to stick with it, like smooth peanut butter or Saphir shoe polish for example, so convincing me to break the mould is no mean feat.

And yet, Mr Steven Hitchcock, English soft-tailor and Savile Row stalwart has done just that. When we decided to embark on this project back in October, it was something of a step into the unknown for me – but Steven’s reputation of course precedes him as one of the finest exponents of the age-old drape-cut in the land. Of course, there are a great number of strengths to his bow, particularly his training. A coatmaker and then cutter at Anderson & Sheppard for some nine years, he studied under his father, John Hitchcock, the near-mythic figurehead for the house for over half a century, mastering the tradition of British soft tailoring in the process. He left the house in 1999 to cut his own jib, and in doing so refined and developed his own take on drape-cut, setting up shop initially on Savile Row and then with a number of other Savile Row tailors in the ‘tailors den’ on George Street around the corner, where he has remained ever since.

Indeed, his take on soft tailoring is uncompromising, and yields a garment that is as practical as it is timeless. The first thing to note is his use of side-body panels in his coats as opposed to fish-cuts, which allows him to work plenty of suppression into the waist of each jacket, and create a defined hourglass silhouette in his coats. Equally interesting is the extreme height and sharpness of his armholes which are cut by rock of eye to be as small as possible, which reduces the distance between the coat collar and the armholes, anchoring his jackets on the neck for effortless mobility. His coats are beautifully padded, with light and airy canvasses that feel featherweight, yet generous, yielding particularly full and round chests.

The result of all this uncompromising work is stunning; richly shaped, lightweight and natural on the body. Although it doesn’t look it, the coat is on the shorter side for an English tailor – but it can afford to be thanks to Steven’s immaculate check measuring and matching, which elongates the silhouette just so. Note how there’s one complete repetition of the check from the bottom edge of the skirt right through the very top of the collar in the coat’s back – no mean feat. This two-by-three double-breasted model is a Hitchcock signature, cut with straight edged flap pockets and twin rear vents that keep the whole thing feeling rather sharp. The lapels are cut to frame the torso just so at 4.25” wide, so are substantial but not overdone, and the high-gorge likewise lengthens the silhouette. The coat fits beautifully around the shoulder blades and right into the small of my rather hollow back. In all candour, it’s a seriously dexterous feat of cutting.

The trousers are cut full in the leg, high waisted to sit just atop the hips, with forward-facing pleats and on-seam pockets. Add a pair of 2” turn-ups and brace-buttons and you’ve got a pair of trousers that feel attractively old school. Steven takes after his father, in that he cuts his trousers quite crooked, to allow for them to follow a particularly close line through the hips and around the seat. Again, the objective is to achieve true comfort without compromising on style. Interestingly, Steven also sewed two detachable brace-tabs into the back of the trouser, which can be folded away if required – a thoughtful touch that prevents the rear brace-buttons from digging into one’s lower back when not in use. 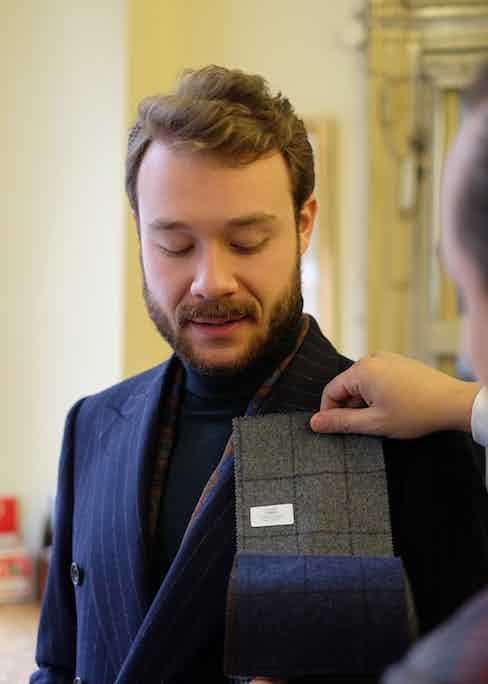 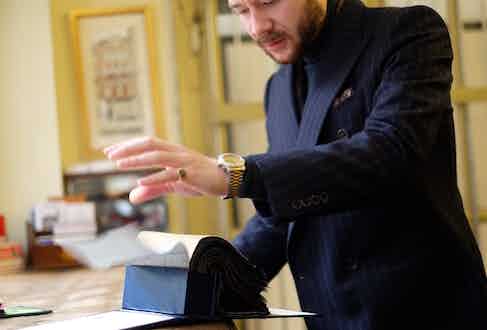 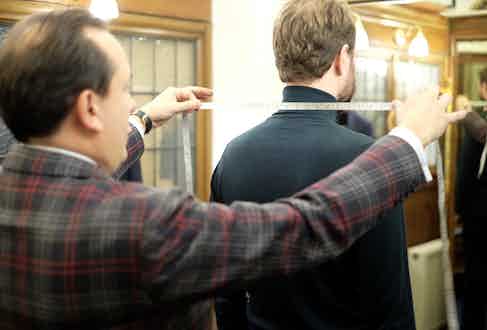 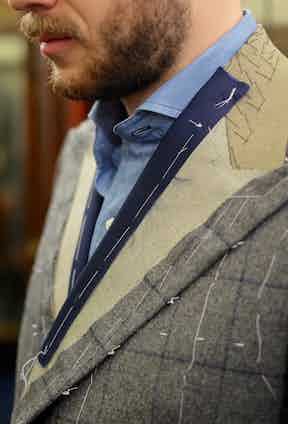 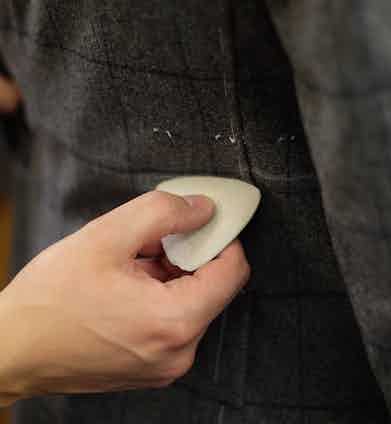 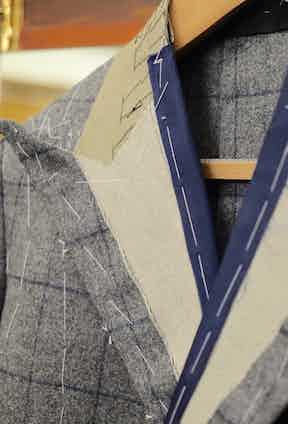 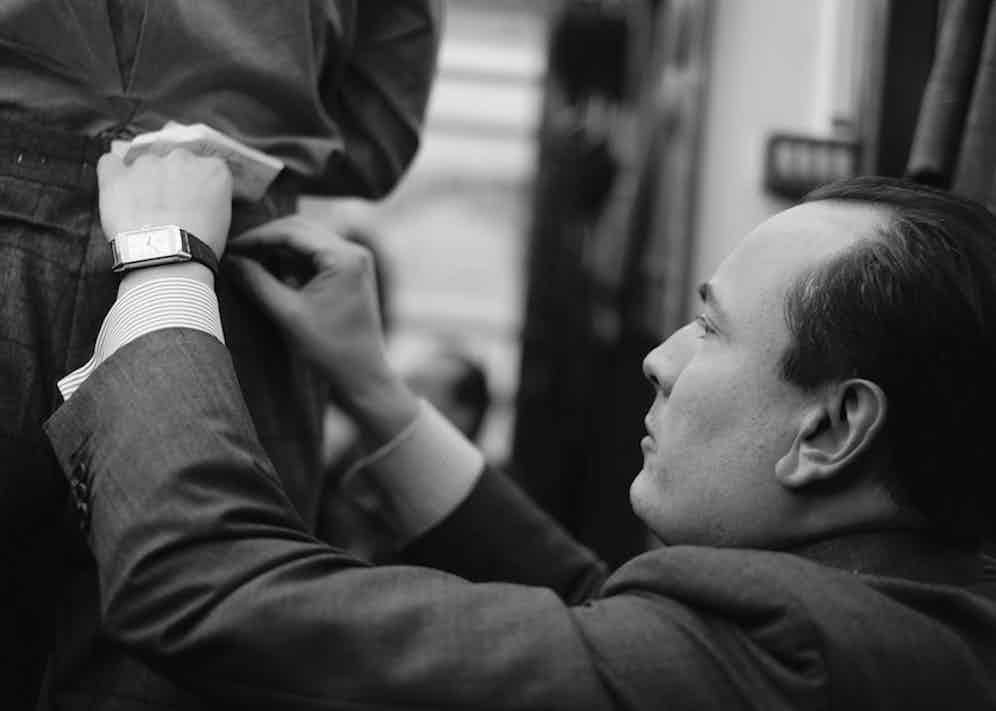 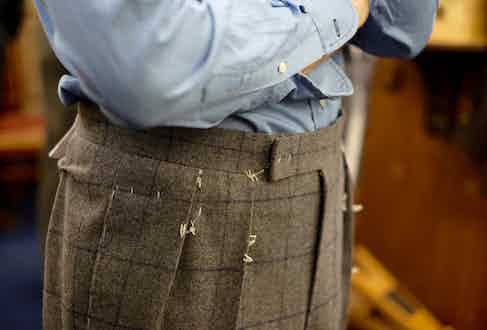 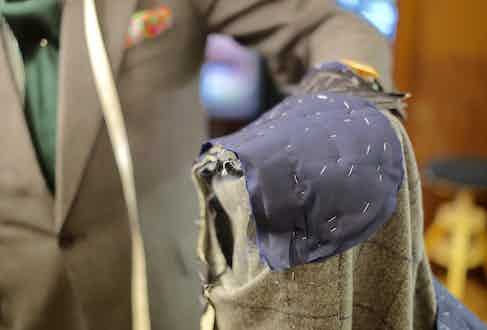 Readers will doubtless be aware that this is a style that connects the wearer back to the glamour of tailored Hollywood at its zenith; the drape-cut reached the height of its popularity in the late 30s and early 40s, as seen on the shoulders of David Niven, Cary Grant and Clark Gable amongst others, (and of course Fred Astaire, who famously used to roll-up the rug and dance in Anderson & Sheppard’s fitting rooms to ensure his new suits were suitably form-fitting). Even so, Steven’s work is not to be taken as old-fashioned or nostalgic. On the contrary, it feels thoroughly easy to wear and one hopes that this suit in particular testifies to the versatility of Steven’s cut.

The finished suit is generous with lots of full but lightly tailored expression in the chest, and it shows off the quality of a good cloth. Its lightweight construction also lends itself to experimenting with slightly heavier cloths than are fashionable, with satisfying results. For this project, we went for a cloth in the Huddersfield Fine Worsteds ‘West of England Flannels’ bunch – a great collection of dense and punchily patterned 14.5oz woollen flannels, beautifully milled and coloured. Alongside the usual suspects in navy and grey, the bunch features some interesting earthy tones; light tan, chestnut, forest green and chocolate brown, as well as a range of glorious double-stripes and double-windowpanes – like this two-tone blue and navy design on a warm mid-grey ground. It’s a confident bunch, with a touch of the Mafioso about it, but as Steven’s work shows these cloths are surprisingly easy to wear. This grey check has proven to wear more than comfortably, despite those extra few ounces of weight.

Indeed, the suit is wearing-in beautifully, and unlike a structured coat, the pristine lines and sharp edges of which can start to weather a little over time, Steven’s work is purpose-built to improve with age. “The front of our coats is designed to drop-in and settle on the front of the wearer’s frame” Steven explains, “it’s a soft coat, so it gets softer with age and settles on the figure for enhanced comfort.” For this reason, the jacket is finished with two jigger buttons, which has allowed the lapel to roll right through to the hip as it has softened down with wear. It’s a look that simply oozes nonchalance.

It is a given then, that this article is to be concluded with a heartfelt recommendation that readers visit Steven for a superbly comfortable and form-fitting suit, beautifully cut and tailored – and let’s not forget that I began this experience as a soft-tailoring skeptic. It is also important to consider that although Steven’s style is associated with a very traditional British look, his clothes are suited to young bucks as much as they are silver foxes; and it was refreshing to work with Steven on a suit that I consider to be no less sexy than the smouldering creations of Edward Sexton or Joe Morgan, albeit very different. His place in the pantheon of British bespoke greats is more than deserved, and his expertise in a uniquely comfortable house style is unquestionable.

American readers might be interested to know that Steven will be making a trip to Philadelphia to see clients old and new between Friday 17th February – Saturday 18th February until 12 noon.

He will then be visiting New York between Sunday 19th February – Wednesday 22 February until 12 noon, with visits to Washington and Boston planned for May. 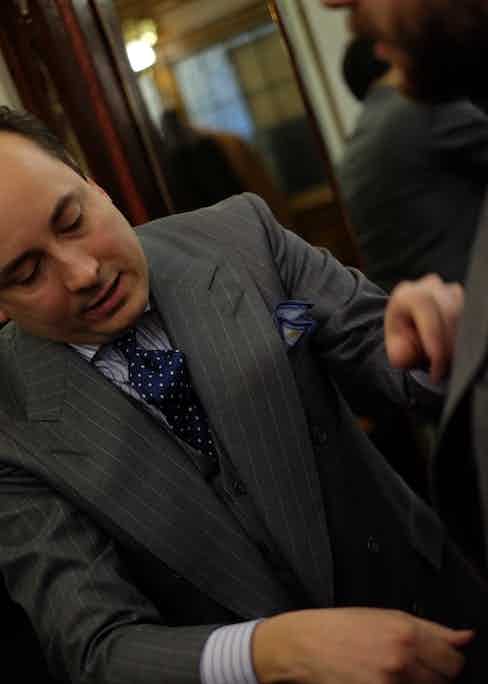 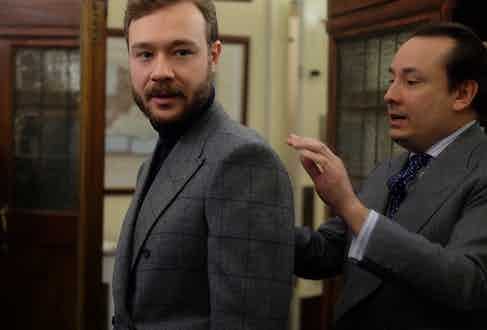 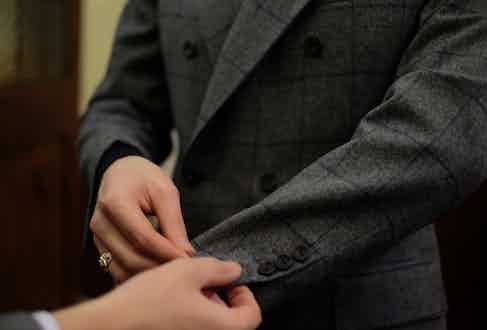 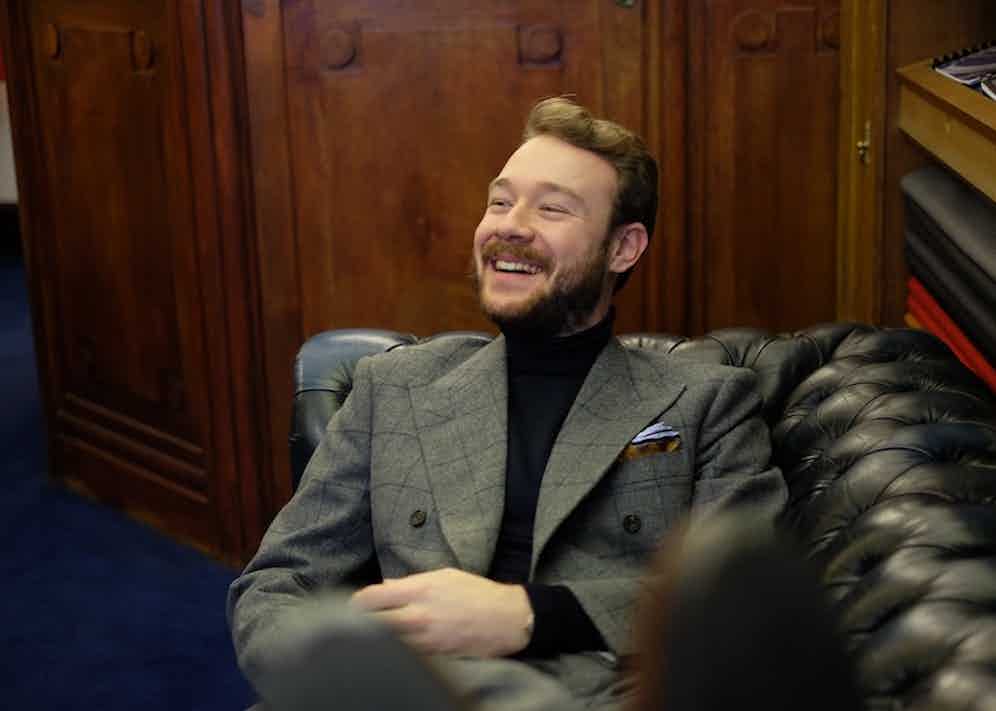 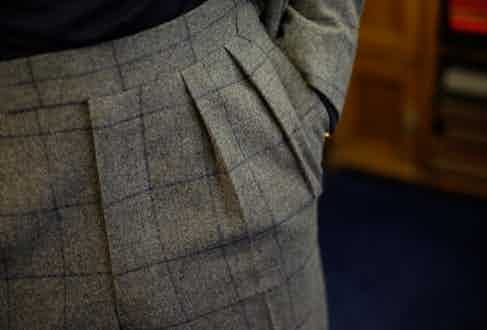 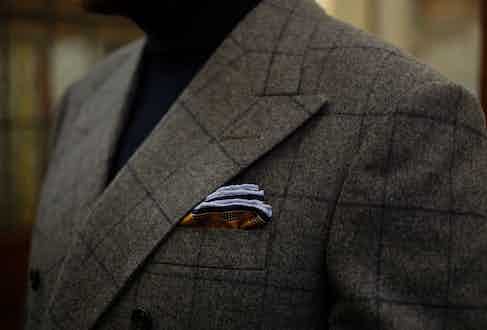