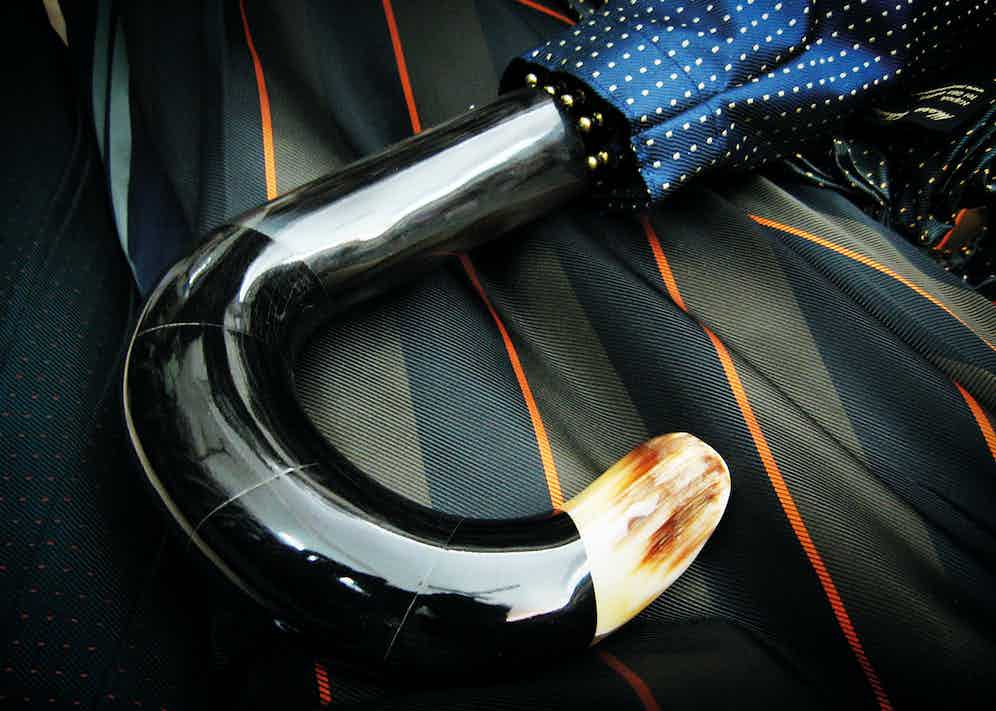 30In the Spanish Quarter of Naples, there is a small cobblestone alleyway named Via Toledo. It's not the prettiest of thoroughfares. As you walk down it, it feels tight and narrow, and on either side there are old buildings covered in grime and peeling layers of wheat-pasted fliers. Where there are stores, the window fronts display tacky goods and big red signs that shout 'Saldi! Saldi! Saldi!' Indeed, perhaps the only charm along this road comes thanks to the screaming Vespas and children zipping up and down the alley during warm mid-afternoons. Other than that, the street feels fairly unremarkable. Until, that is, you stumble across Talarico Umbrellas.

Mario Talarico's workshop can, on first viewing, seem as plain as the alleyway itself. Cheap, drugstore-quality umbrellas festoon the outside of his shop, and inside, the cramped space feels very much like an old hardware store. All around the one- room shop are bundles of umbrellas - hung from the walls, stacked in corners and piled on top of shelves. Each of them is sheathed in a cellophane wrapping that shines from the fluorescent lighting above. The sight may lead you to dismiss them as just bigger versions of the cheap umbrellas outside, but you'd be wrong. 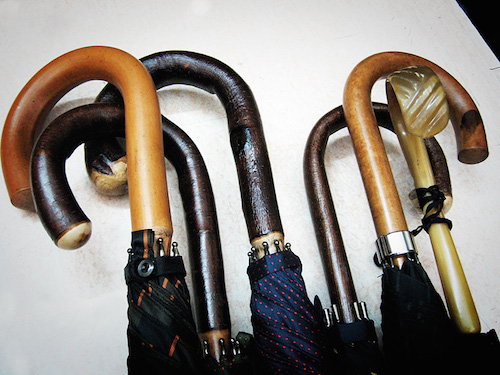 On closer inspection, you'll notice that the handles are made from some of the most richly shaded dark woods you've ever seen, and at the other end, the tips are capped with animal horn. Next to these masterpieces are framed photos of Mario Talarico with various luminaries, many of whom are awarding him with plaques. It's only then that you realise you're in one of the world's best umbrella shops, where things are still made by hand to the highest standards possible.

At 80 years of age, Mario works here with his nephew, Mario Jr. The two represent the third and fourth generations in their family to make umbrellas by hand, and continue the family's business, which was set up in 1860. Most of what they sell here is ready-made, but if you stop by when they've just received their shipment of woods, they can make an umbrella to your exact specifications. I was lucky enough to stop by at the right time, and the younger Mario showed me the variety of woods they had just received.
The first two were a couple of Eastern materials, including whangee and old-growth Malacca from Malaysia. Both were lightweight and showed a lot of surface interest. Whangee relies on texture for its appeal; canes with more knots are generally considered more aesthetically pleasing in the umbrella-making world. Malacca, on the other hand, is valued for its subtle, mottled surface. These two are perhaps the most popular materials for luxury-end umbrellas, but they unfortunately don't lend themselves to one-stick constructions - it's simply too difficult to find pieces long enough.

Talarico has a wider range of woods for single-stick constructions. For example, there's Eastern ash, which is a bit heavy but has a beautiful, shimmering green grain when the bark has been left on. There's also Canadian hickory, which is so robust that it's often used to make baseball bats. From the Italian countryside, they have Tuscan hazel, which has a handsome golden sheen, and cherrywood, which leaves a wonderful smell in their workroom. Should any of these be too prosaic for you, they also have horns and tusks from rams, warthogs and hippopotamuses, any of which can be used to form the handle of an umbrella. 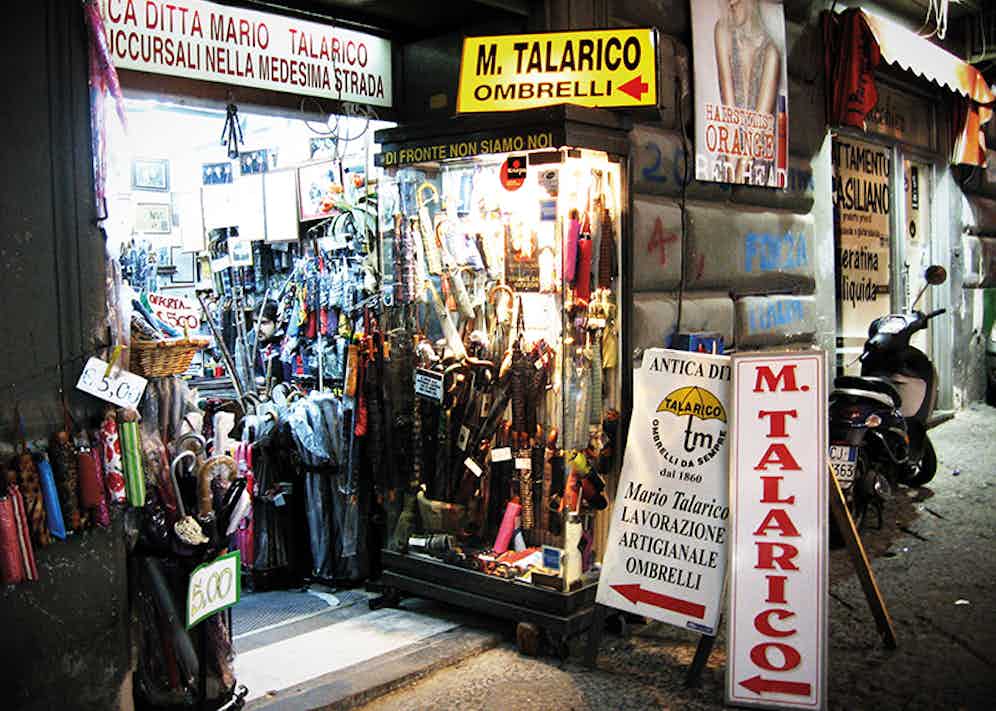 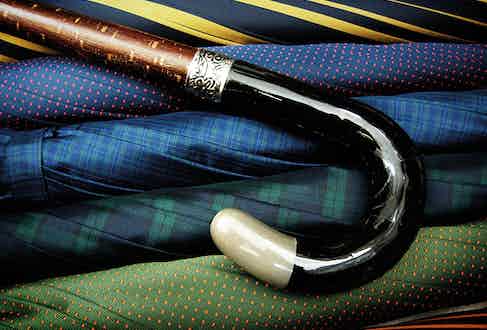 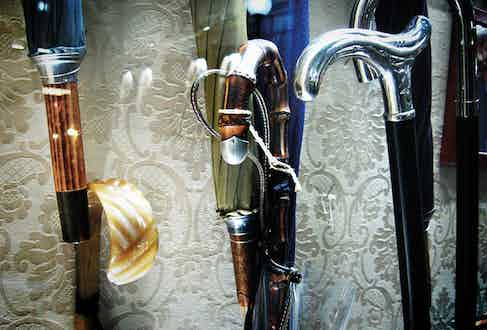 I chose a particularly rustic-looking Italian chestnut with a 'root' handle. That means that the bark had been left on, but the end was finished into a smooth, polished knob. The shaft, on the other hand, had been shaved, which allowed the umbrella to have a slimmer profile when it was furled. For my canopy, I selected a navy polyester twill with small, repeating white dots. Though silk canopies tend to be romanticised, they're not as good at keeping the rain out - and that, of course, is the umbrella's job. Should a client want other canopy options, Talarico also has nylons and cottons with resin finishes. Of course, all these materials come in a variety of colours and patterns, and you can choose anything from solids to stripes to checks.

It took a couple of days to make the umbrella. Between the two Talarico men, only three or four umbrellas are made per day, and each one involves eight or nine painstaking steps. The first involves cutting the wooden shafts with a circular blade in order to form the two slots for the hairpins they'll insert. Each of these is made from nickel silver, a metal that can withstand extreme tension. Once the slots are hand-stained in order to better conceal them, the hairpins are bent into the necessary shapes with pliers before being inserted into the shafts. This forms the part of the umbrella on which the metal runner will move up and down when you open and close it. Next, the men attach the eight or 10 ribs that will hold the canopy. These are commonly referred to as 'whalebones', because that's what they were originally made from. These days they're made of metal, and Talarico sources theirs from Germany, where they believe the strongest are made. The younger Mario took not a little pride in showing me how none of their ribs would invert, even when he whipped the open umbrella through the air. 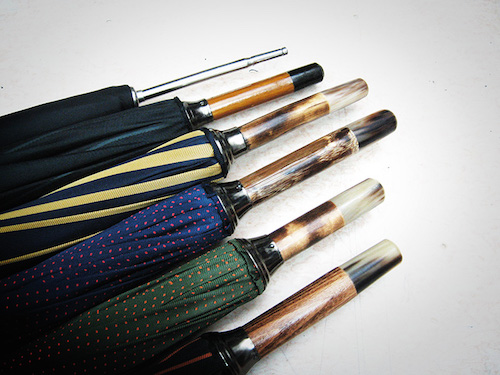 Each of these ribs is attached to the metal runner at one end of the shaft and a notch at the other. Next, the canopy is made by sewing eight to 10 triangular pieces of fabric together, and then putting in small metal caps at the ends of each of the seams. These caps allow the men to hook the canopy onto the ends of the ribs, so that the fabric will form a taut dome when the umbrella is open. Once on, it's secured into place by aligning the fabric's seams with each of the ribs, and then hand-sewing them together.

Finally, there are the trimmings. A decorative fabric- covered ring called a 'rosette' is used to hide the place where the metal runner and ribs meet. Additionally, an iridescent mother-of-pearl button and small metal ring are also attached to the canopy so that the fastening band can secure the umbrella when it's furled. Lastly, a beautiful animal-horn cap crowns the end of the shaft to protect it from wear.

I've been using my umbrella during the spring rains this year in San Francisco and for part of the flash summer storms in Moscow. It performs well and feels more substantial in hand than any other umbrella I've owned. Even against the tougher winds, it never shows the slightest hint of flipping inside out.

Of course, form being just as important as function, it also has the perverse effect of making me smile every time it starts pouring down. I enjoy taking it out, unfurling it and then pushing the metal runner up until the canopy makes that characteristic sound, almost like a drum being tapped, when the runner clicks securely into place. I still can't stop admiring the beautiful bark left on the wooden handle and how it gently eases its way upwards to form the shaft, which holds the navy dotted canopy above me.

Rain nowadays is a welcome reminder of a day I witnessed some exceptional craftsmanship in an otherwise unremarkable alleyway in Naples.