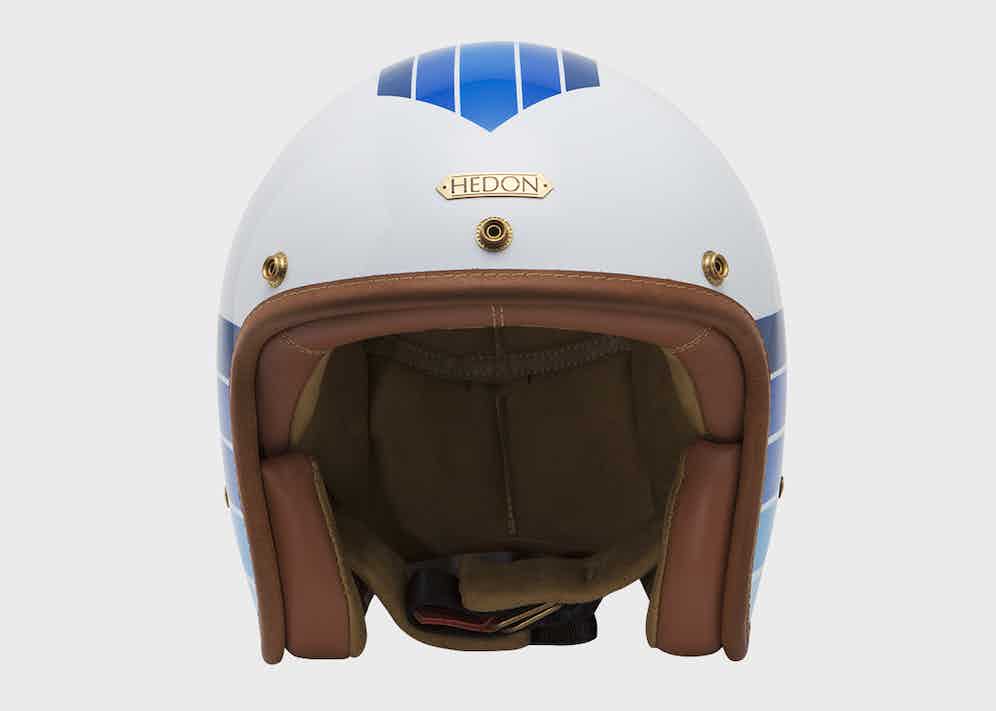 The root of the word ‘helmet’ comes from the medieval utterance helm, for protective headgear donned in combat. Helmets used in war date back to 900 BC, when they were worn by the Assyrian soldiers of Asia Minor and Mesopotamia to protect the head from penetrative strikes, as well as absorb the energy of crushing blows. Unsurprisingly, they soon became symbols of valour and courage in popular culture. Amongst the most famous helmet clad mythological deities are Mercury the Roman God of Speed and Athena the Greek Goddess of Wisdom and War. Throughout history, the helmets of warriors were routinely decorated using various motifs including heraldic coat of arms in the medieval age, faces of demons intended to intimidate foes on Japanese Samurai helmets, while ancient Roman helmets known as Galea featured different plumes and spikes to allow for rapid recognition of the soldier’s rank.

Since the beginning of the 20th century, helmets have been associated with the pioneering spirit of early aviation and motorsport. But it is particularly in the world of modern motorcycling that the helmet is the most requisite form of safety equipment. Even so, the vast majority of helmets are bulbous, plastic and aesthetically displeasing to the eye. For decades there has been a huge vacuum for a craft oriented helmet brand to reconcile the need for protection, with beautiful elegant design. Fortunately for the motorcycle world, Hedon Helmets, founded by married couple Lindsay Chong and Reginald Flint, has stepped into the darkness like a proverbial Prometheus to shed light on the miasmic haze of questionable motorcycling style. Hedon was created to transform the helmet, whilst retaining all its integrity as a protective device, from a purely pragmatic tool to a design object of such startling beauty that even non-motorcycle riders have been tempted to purchase them purely for display. And accordingly Hedon has simultaneously become the hottest cult brand in the vintage and custom motorcycling worlds as well as the universes of design and craft.

Hedon’s story begins in 2011, when Flint and Chong decided to blend their extensive experience — the former oversaw the operations of the oldest helmet producer in the world, Lazer, in China and south-east Asia; the latter is a respected product and graphic designer — to plug a gap in the market by fashioning stylish helmets using craft oriented methods. To that end, they’ve taken urban motorcyclists’ headgear back to the drawing board and come up with tremendously light, hyper-stylish helmets that are Zen reductive in their purity of lines and yet are road-legal for the U.K. and Europe. 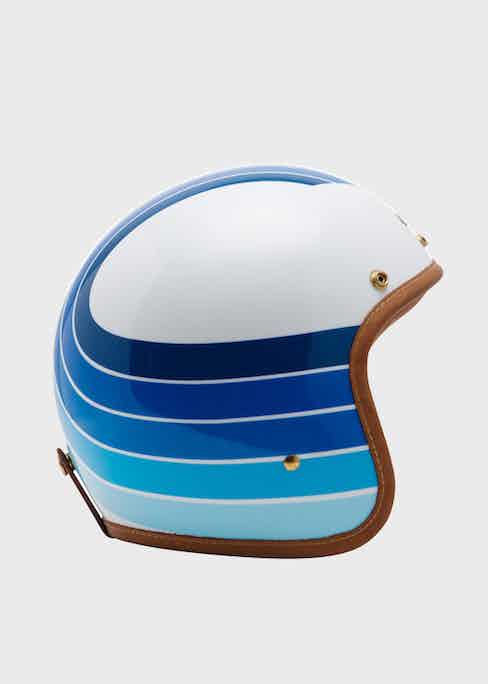 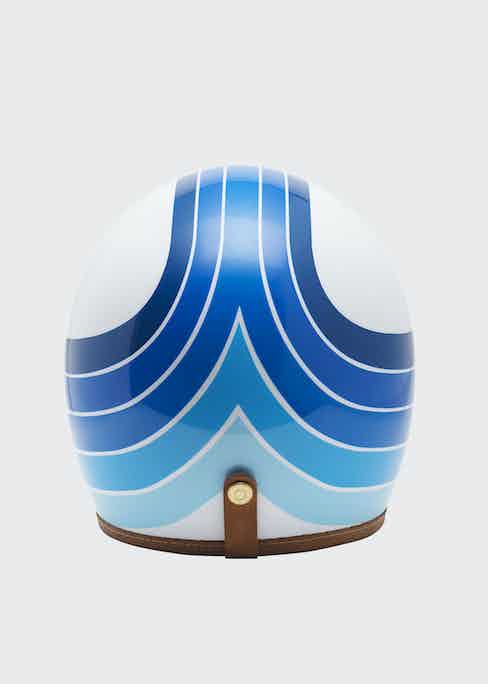 The process of crafting a Hedon helmet is incredibly artisanal. Chong explains, “Our helmets are made of a composite of carbon fibre and fibre glass, all our fibres are pre-impregnated with resin, giving them a very even finish. Each panel of fibre is hand-laid and moulded on to our head moulds, piece by piece, to be finished in our autoclave machine, in which the result is baked under pressure to reach its hardest and strongest state. We then paint our helmets with the same paint and techniques one would paint a car with, to achieve the same durability against the elements and lovely depth of colour.”

Holding a Hedon helmet in your hands for the first time is remarkable, as is revelling in the quality exuded by the beautifully hand-stitched leather liner and detailing while losing yourself in the fathomless depths of the perfectly executed paint finish. Slip it on and you’ll be amazed by how light and comfortable it is to wear.

For The Rake’s first collaboration with Hedon Helmets, we harked back to a signature decorative theme used on Harley Davidson Sportsters from the 70’s during the company’s AMF ownership period. The iconic pattern of horizontal lines each in a slightly different colour, yet in the same chromatic scale as the rest brings to mind the greatest works of Op artists like Frank Stella and Ellsworth Kelly.

The two resulting helmet models, named Apollo for the white helmet featuring The Rake’s signature pattern of ascending blue stripes and Artemis for the black helmet featuring the same, have been created and named by Chong and Flint. Each helmet is crafted on a made-to-order basis, with a forty day order-to-door turnaround time, such is the degree of handwork involved. As always they are exclusive to The Rake and represent the zenith of masculine motorcycling chic. 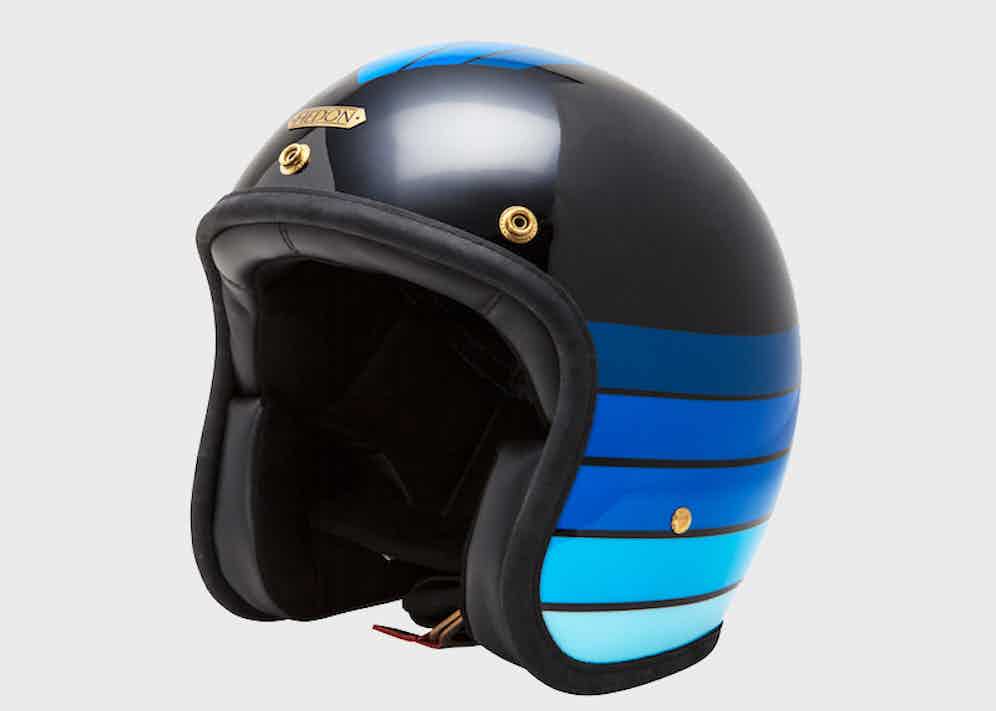 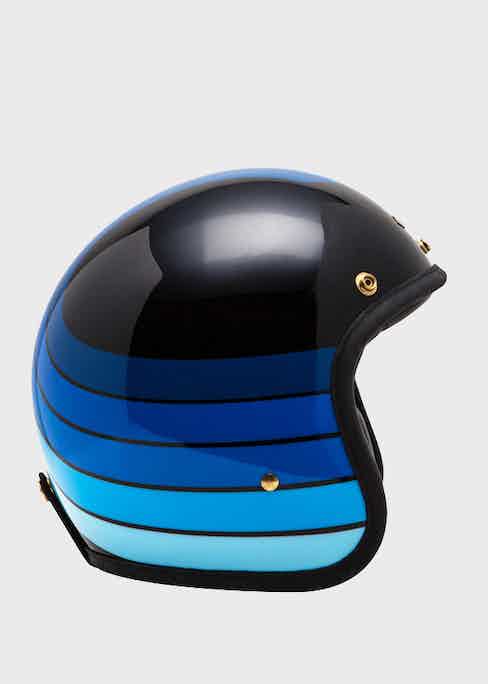 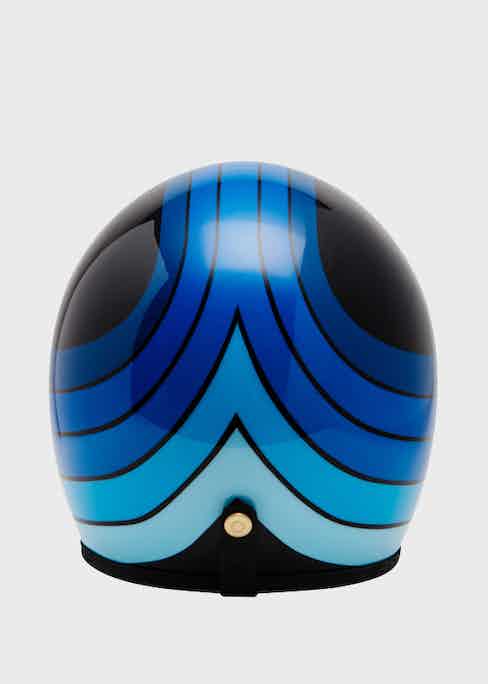