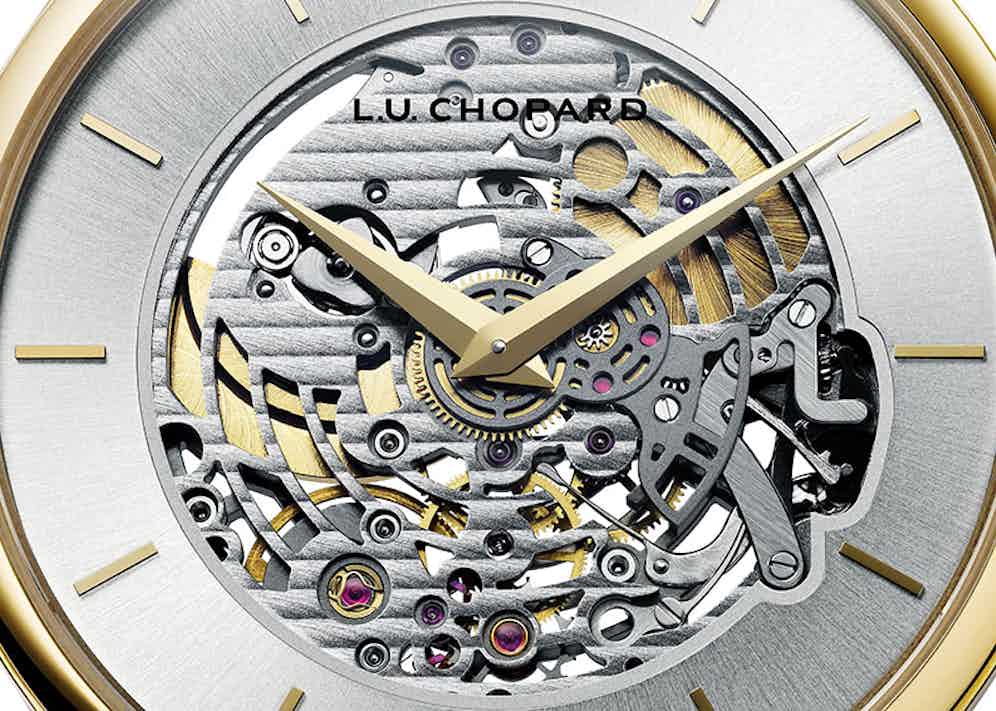 A magnified view of the Chopard L.U.CXP Skeletec — its portmanteau name the perfect description of its skeletonised movement and high-tech finish.

As with many other changes in watchmaking trend, the technique of skeletonisation became popular because of economic circumstances—in the late 18th century, a shortage of raw material made it expedient for watchmakers to pare down the material used in the making of movements. At the same time, the fall of the absolutist French monarchy towards the turn of the century — with Louis XVI and Marie Antoinette its vilified main figures—ignited a reaction against the aesthetics of excessive ornamentation that had typified the preceding period. (The subsequent oppressive Reign of Terror under Robespierre in France probably did nothing to nudge European sentiment back towards the optimistic, Arcadian-themed and highly decorative time pieces in vogue during the previous regime.)

The spirit of skeletonisation is, at its most fundamental, the spirit of technicality. As strange as it may seem to us today, with our understanding of traditional skeletonisation’s elaborately baroque forms, the original aim of open working a watch movement was to throw the focus back on to the watch movement and the beauty of its construction—especially in the case of particularly complicated watches.

In skeletonisation, the plates and bridges of a movement are hollowed out to leave only the barest framework needed to hold the components together — hence the name of the technique. In order to accomplish this, holes are bored into the plates and bridges, then joined with lines cut by a jigsaw, there by removing the sections to be excised. The edges are then smoothed down and polished with a combination of files and abrasive pastes to create the delicate metal webs we observe in skeletonised timepieces. 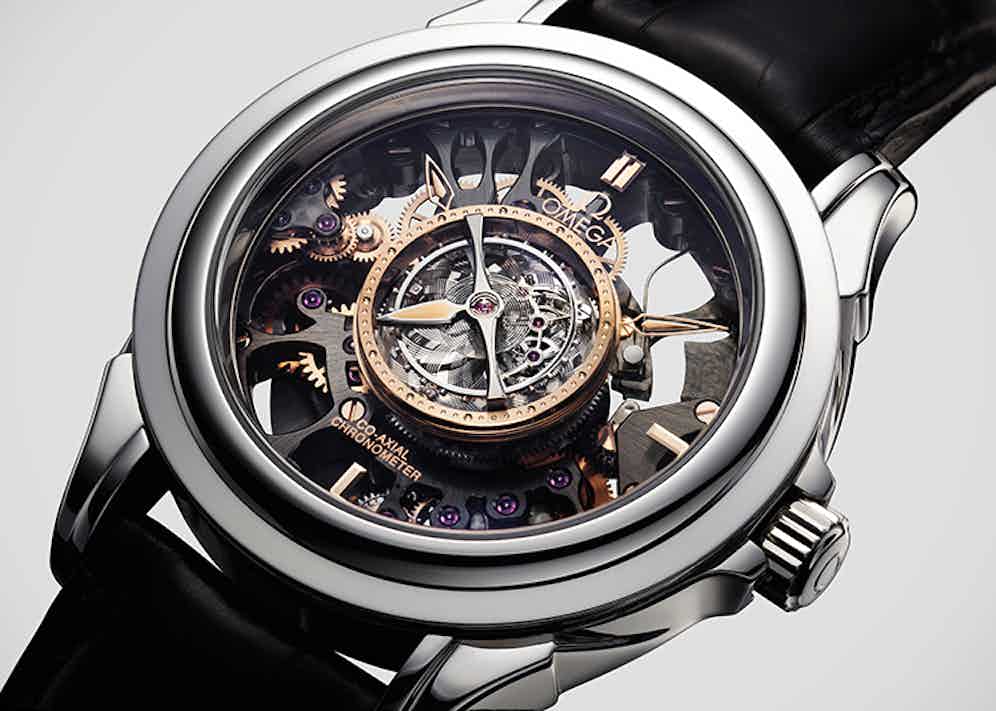 There is a distinction to be made between watches that have been skeletonised, and those which have an open dial—some people may tend to confuse the two initially, given that both have the goal of showcasing the movement. An open-dial watch may or may not have a skeletonised movement; what defines it is simply the lack of a dial (or simply a transparent one) that puts the inner mechanics of a watch on display. The dial itself may be skeletonised—otherwise known as an open worked dial or pierced dial—to allow glimpses of the movement within.

However, unless its bridges and plates (and sometimes even components such as the mainspring barrel) have been open worked, a time piece does not rightfully come under the skeletonised designation.

One of the most challenging aspects of skeletonising a watch movement is maintaining essential rigidity whilst removing as much material as possible. Everything else being equal, a grid worked structure is far less sturdy than a solid one,and the same holds true for a skeletonised movement. A watchonly works if the positions of its components are fixed in relation to each other — or, at the very least, if the parameters of its degrees of freedom are known and accounted for.

The plates and bridges of a movement are what keep the gears in a certain position within a watch; they define the very interaction of the various movement components. If two wheels are too close together, the gear teeth will be too deeply engaged, resulting in energy being lost through friction—and in some cases becoming completely jammed. If they are too far apart, energy transmission will suffer, and in extreme cases the gear teeth may fail to mesh at all. Here in lies the danger of a movement that lacks rigidity and is able to flex even slightly one way or another: it is — in a word — useless.

Hence, although the work of the skeletoniser may seem to be purely decorative and far removed from the nuts and bolts of actual mechanical watchmaking, nothing could be further from the truth. A single movement bridge, depending on how it has been open worked, can be either flimsy or robust, even if the two variations have exactly the same total mass; it all depends on how the material has been distributed. A skeletonised watch is therefore the product of a craftsman who wields the knowledge and skill of a micromechanical structural engineer in every line of his work. 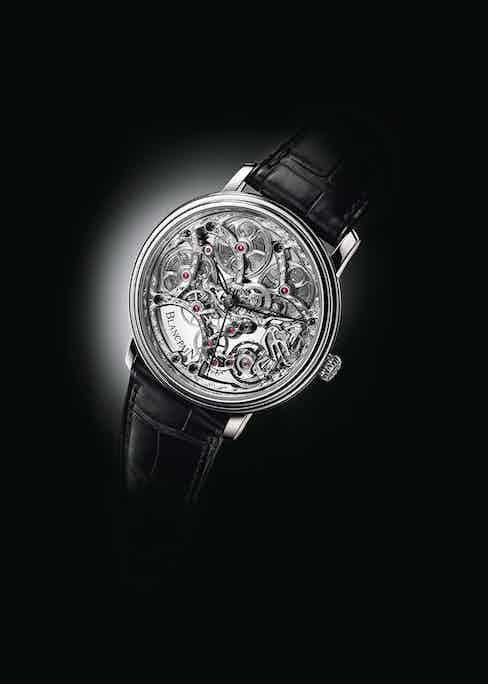 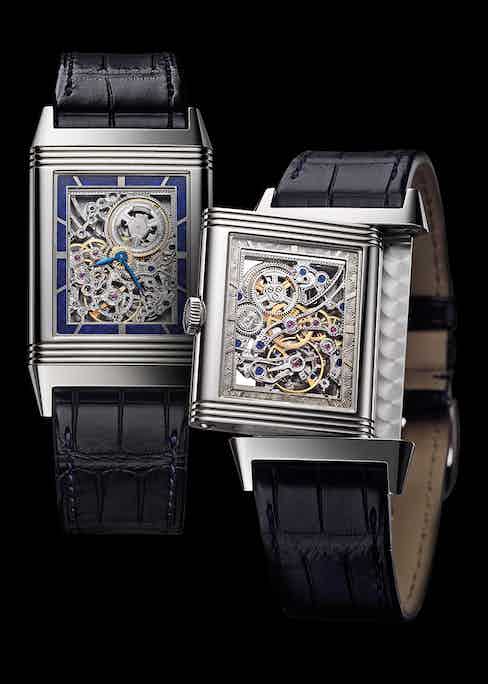 A delicate strength. The year 2012 yielded no small number of exquisite examples of skeletonised timepieces, from those housing basic time-only to high complications.

The Blancpain Villeret 8 Jours Squelette epitomises the pinnacle of this craft, with its intensely open worked plates and bridges suspending the movement components in an ethereally light configuration of filigreed arcs and flourishes. The front and back of the watch are sandwiched with clear panes of sapphire crystal to fully showcase every aspect of the movement.That the skeletonisation and engraved surfaces of the plates and bridges have been done by hand is obvious by the number of sharp internal angles on the bridges—something which cannot be accomplished by machine. The movement is an open worked version of the famed Blanc pain eight-day power-reserve calibre, with its three skeletonised main spring barrels clearly visible in the upper half of the watch—giving an easy-to-read indication of the amount of wind left in the timepiece.

Another fine example of traditional skeletonising technique is the Jaeger-LeCoultre Grande Reverso Ultra Thin Squelette, in which even the barely-there balance cock and minuscule barrel click are adorned with hand-engraved curlicues and swirls. As mentioned previously, an open worked movement is inherently less robust than its solid counterpart, so it’s even more incredible when the technique is applied to an already vulnerable extra-flat movement. In such instances, the skeletonised version of a movement is usually visibly thicker, to compensate for the loss of interstitial material in the supporting structures. It’s therefore amazing that the open worked calibre 849RSQ—a variation of the round calibre 849, one of the thinnest hand-wound movements in the world — measures in at 2.09mm thick, only 0.24mm thicker than its primo genitor. The calibre 849RSQ was first seen over 10 years ago in the Reverso Platinum No.1, and its current incarnation features a blue enamel border at the periphery of the movement.

Although it is devoid of the meticulous engraving that characterises traditional skeleton timepieces, the Audemars Piguet Royal Oak Extra Thin Open worked Tourbillon conveys a stark beauty that is all its own. The combination of open working and the mesmeric rotation of the tourbillon speak to the roots of the Le Brassus manufacture in centuries of haute horlogerie, while the brushed anthracite finish of the skeletonised bridges and plates brings a resolutely contemporary outlook to the watch. It’s entirely appropriate that this dual is miscontained within the steel case of the anniversary-edition Audemars Piguet Royal Oak —the emblematic modern classic icon of our horological age.

In similar vein is the 2012 Chopard L.U.C XP Skeletec. Its main plate is hollowed out in a radial grid work that allows glimpses of the L.U.C calibre 96.17-S within while projecting a strict regularity and industrialised finish and providing stability to the construction of the movement. The absence of sharp internal angles in the open working is a give away to the fact that the movement is not completely hand-finished. This, however, is a point of practicality that serves to underscore the Fleurier manufacture’s twin commitment to uniting high watchmaking and smart design.

The Omega Central Tourbillon Skeleton, released in 2010, is the spectacular open worked rendering of one of Omega’s most stunning horological achievements—the central tourbillon. The pierced, dark-hued movement is juxtaposed with the bright components within, drawing attention to the technical accomplishment at its heart. Even the industrial finish of the skeletonised plates and bridges only serves to highlight even further the gold-rimmed tourbillon—the perfect balance of profound tradition and assertive modernity. 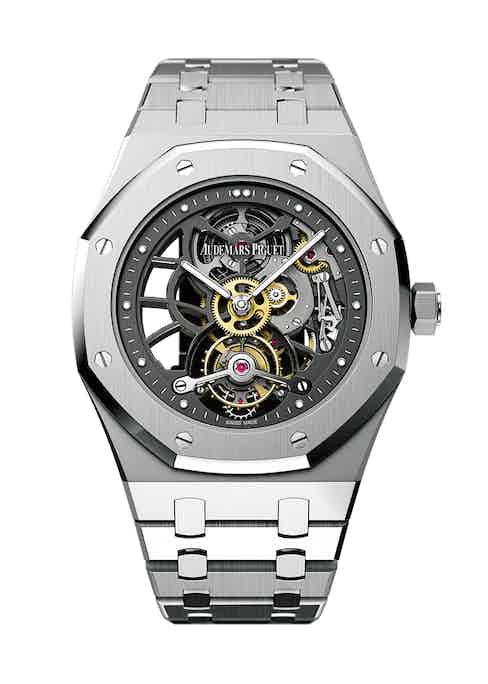 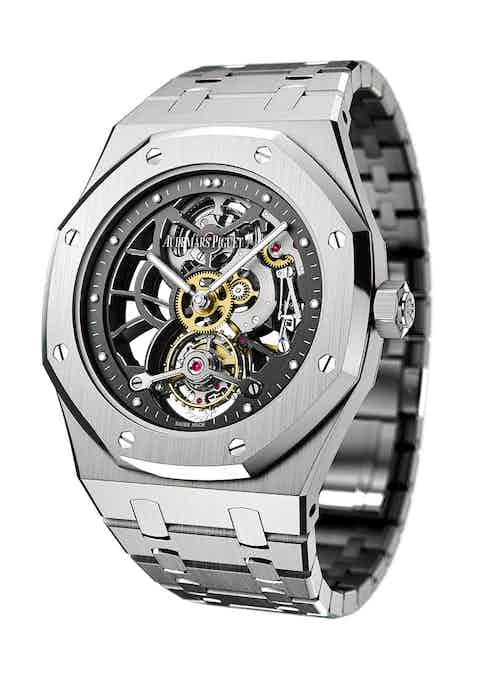 Although this is merely my own humble opinion, it might be said that skeletonisationis in fact a complication in its own right—not in the conventional sense that mandates functionality and the transmission of time keeping information, but in the amount of experience and highly developed savoir-faire that is needed to execute it properly.

Here, then, is the best thing about a skeletonised timepiece. Other types of watches have their own rogues’ galleries of egregiously misbegotten designs—unintuitive chronographs, over cluttered perpetual calendars, downright ugly hours-and-minutes creatures (clearly the simplicity of such watches does not preclude offensive aesthetics). The odds, however, of encountering a badly designed skeleton timepiece are near negligible. Behind every single hand-worked skeleton watch is a master of his craft, combining both technicality and design in an evolved horological creation.