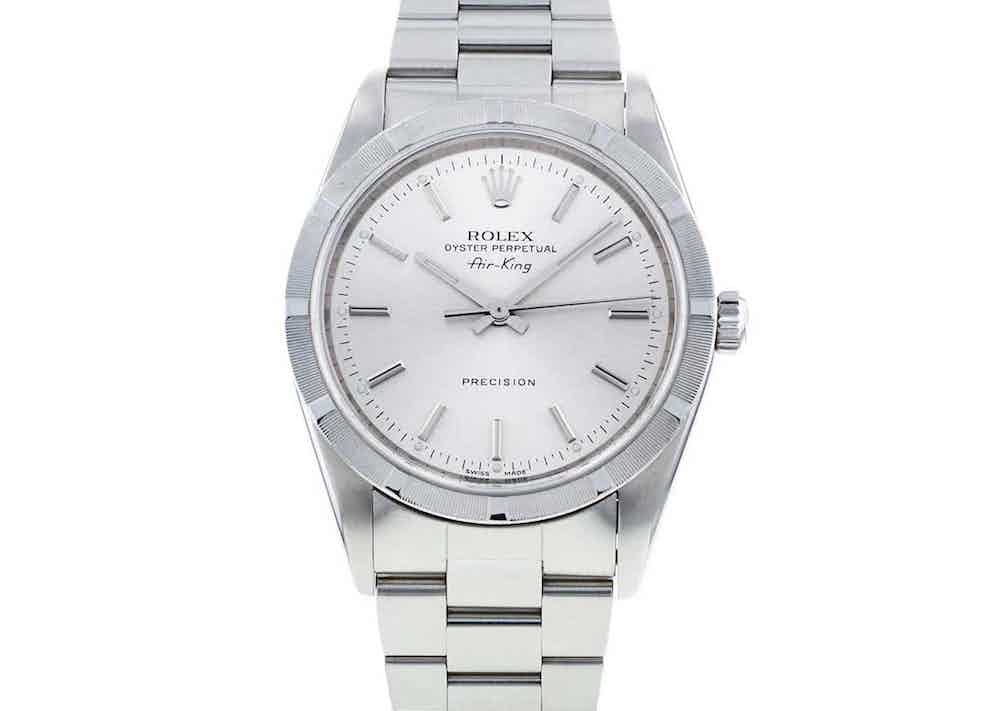 The Air King has always had a special place in my heart. A reference 5500 Air King was my first vintage Rolex and it’s still a watch that I cherish and wear regularly. Many years ago the Air King was viewed as an entry level to the Rolex league, but over the past few years the watch has been given a new lease of life with collectors appreciating the watch as a classic Oyster of classic proportions. It is a particularly fun watch to collect due to the plethora of dial variants that appeared in the watch over its lengthy lifespan. And many view the latest iteration to be something of a future classic… 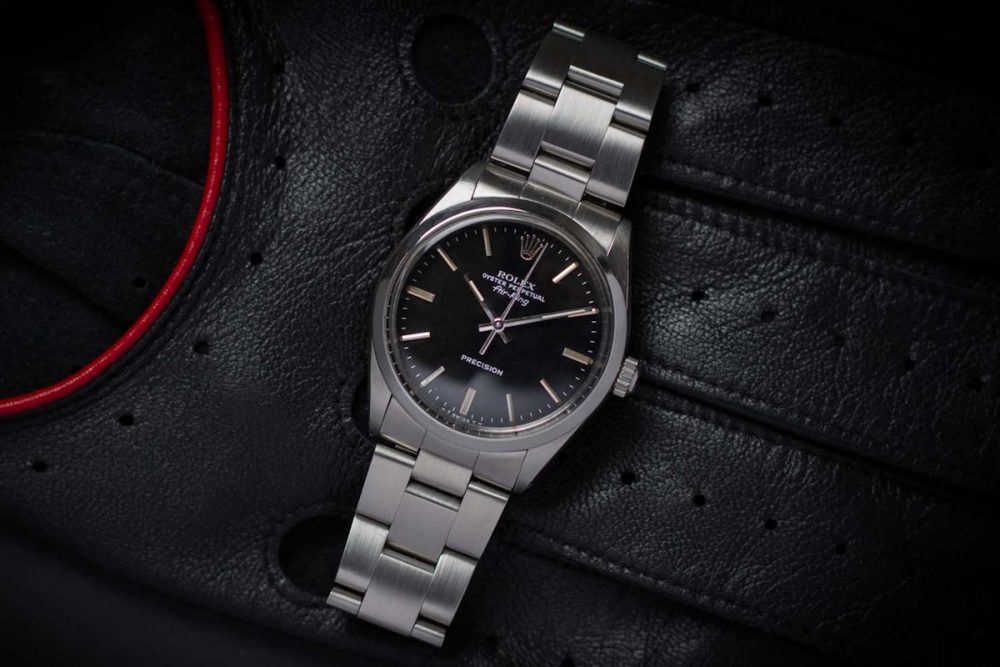 The Air King name was first used in 1945 and has had a constant presence in the Rolex line up until 2014, making it one of the most enduring Rolex models thanks to its near 70 year long run. Hans Wilsdorf created the ‘Air…’ series to celebrate the heroic pilots that took part in the Battle of Britain. Names used included Air Lion, Air Giant, Air King and on Tudors the Air Tiger. Ultimately only the King survived with its unique font and decades of variations, double-signed dials and forays into the super league of sports watches. 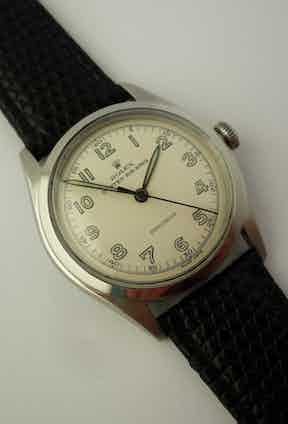 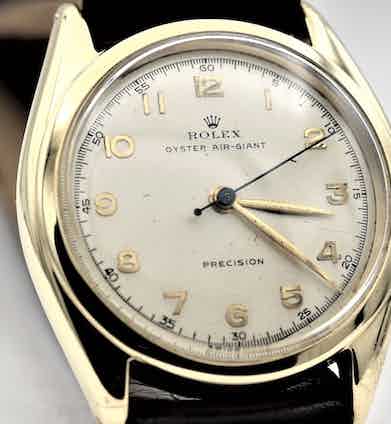 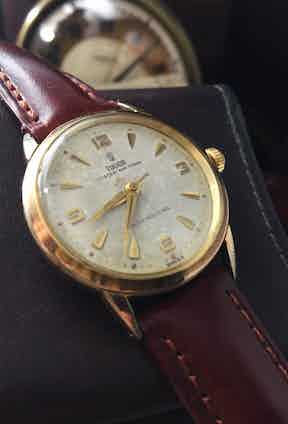 The longest reference run was the 5500, which was introduced in 1957 and stayed in the catalogue until 1990. The 5500 was always badged as a Precision or Super Precision watch, chronometer rated, due to the fact that it relied on the calibre 1520 and then 1530 movements. Housed in a 34mm steel case with smooth bezel, the watch also took on the appearance of a gilt dial Explorer briefly in the 1960s. Known by collectors at the Air King Explorer, due to it sharing the AK’s reference, these watches are now highly sought after by collectors. It is not unusual, however, to see Air Kings fitted with aftermarket (read fake!) dials and hands being sold as original. 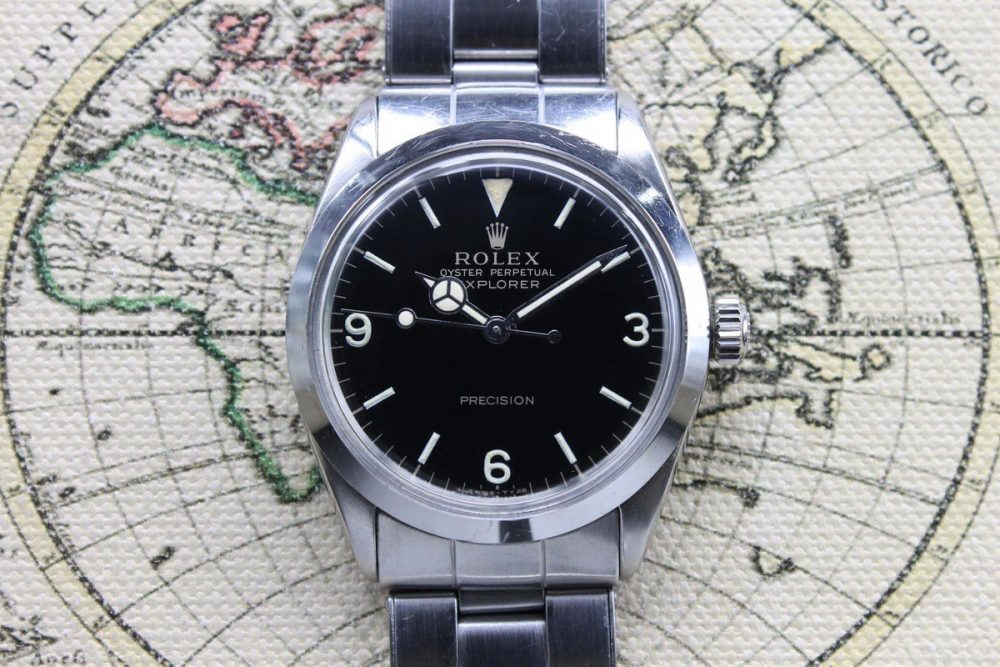 Since the era of the reference 5500, the Air King was used extensively as a presentation watch. Probably due to its entry-level price point, there are lots of examples of Air Kings with company logos applied to the dials. The iconic 2008 Antiquorum ‘Revolution’ sale, a Rolex-themed auction that consisted entirely of Rolex sports models, had a curated selection of Air Kings that recognised the watch and its role in the evolution of the Rolex sports watch. As part of the Air King section, there were examples of watches that featured the logos of companies such as Winn Dixie (US Supermarket chain), Pool Intairdril (Libyan Oil Company) and Domino's Pizza. 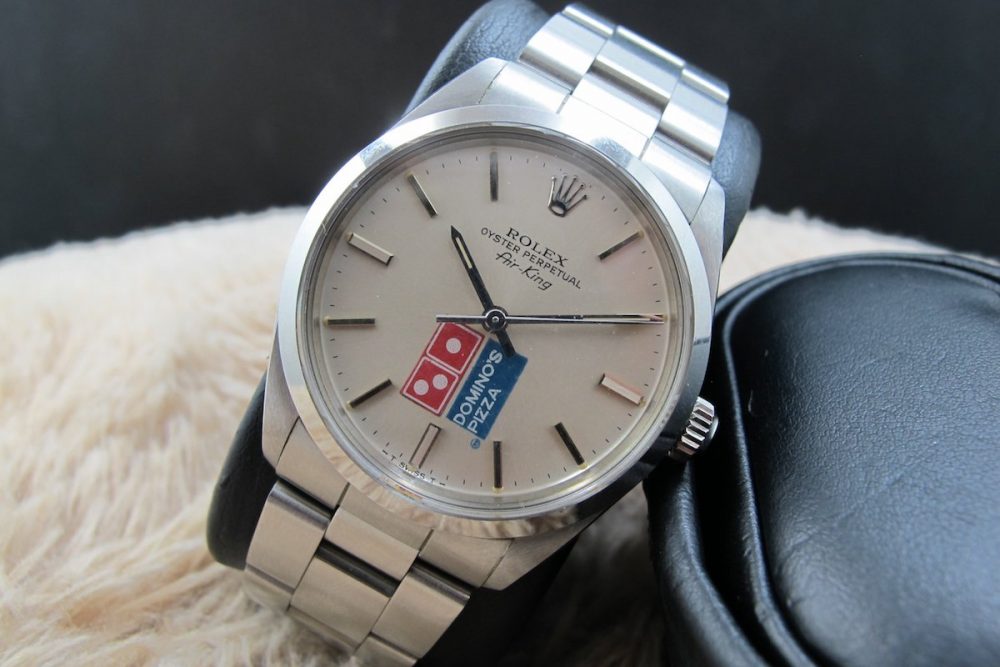 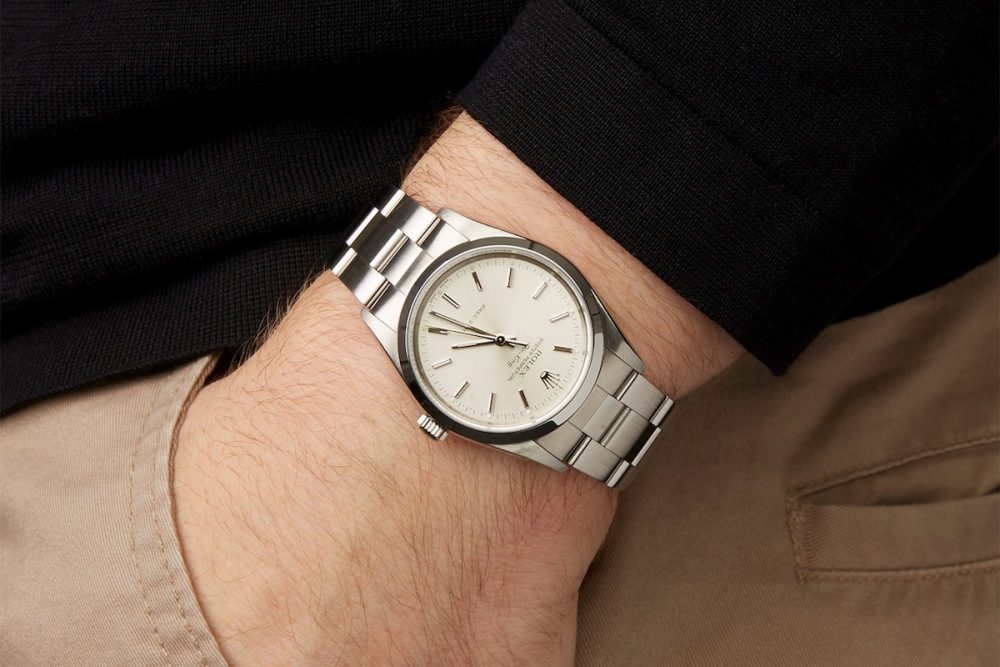 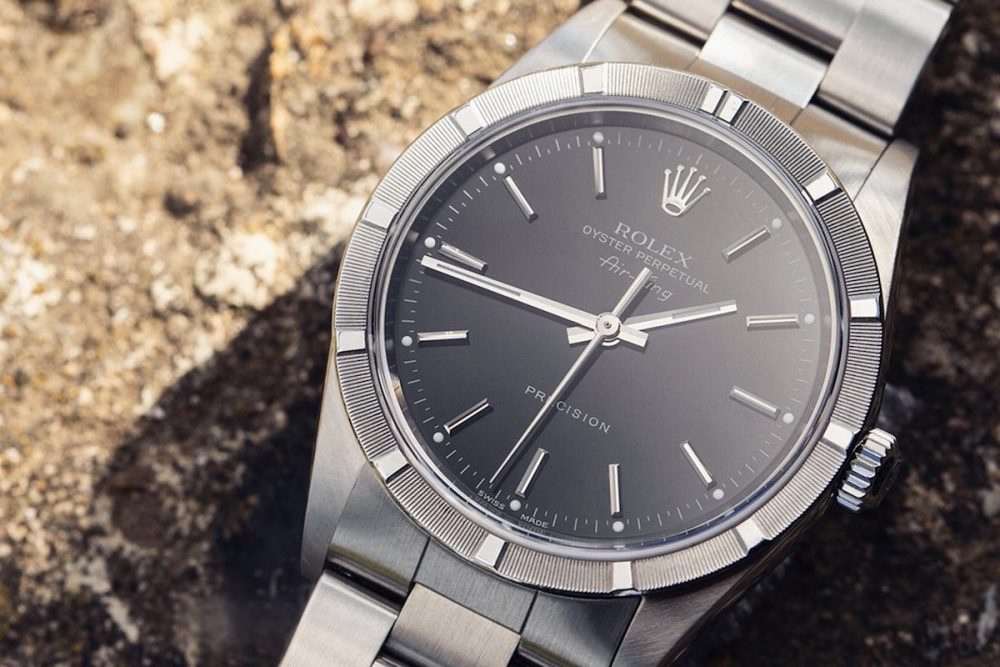 In 2007 the 114200 series was introduced with the COSC chronometer rating for the first time and therefore the PRECISION text was finally replaced with SUPERLATIVE CHRONOMETER OFFICIALLY CERTIFIED (SCOC). In this series there was also a reference 114210 with engine turned bezel and the 114234 with fluted white gold bezel. The watch was also treated to a baller makeover with rare examples fitted with diamonds on the outer edge of the hour markers. The King truly went bling! However, all good things must come to an end and for the first time in the model’s history it was laid out to pasture and removed from the catalogue in 2014. But it wasn’t the final death knell, and with a Lazarus-esque return it came back bigger and stronger than ever in 2016.

Come on – who could compete with the launch of a steel Daytona? Especially a ceramic bezel version that the whole world had been waiting for! But this is exactly what the newly revamped Air King had to do in 2016. I was at Baselworld that year and it was pretty difficult to get near the window that housed the new Daytona that spring in 2016. But I was drawn to the new Air King that with only a small amount of general attention made a big impression on this fan! Gone was the 34mm case and classic Oyster styling and in its place a new 40mm case (actually the same as the Milgauss) and a dial that was unlike anything else ever seen before. This was now unquestionably a sports watch, a hark back to the Air King Explorer of the 1960s. And it was the dial that was the most talked-about element. Inspired by the Rolex-manufactured registers on the Blood Hound Super Sonic Car, the dial is borrowed from the Explorer with the signature applied 3-6-9 numerals, but with painted arabic minute numerals at five-minute intervals. The coronet was in daffodil yellow and the ROLEX text in eye-catching green, a hue that was mirrored on the seconds hand. But there, nestled about the COSC text on the bottom half of the dial was the old familiar AIR KING text in the classic 1950s font that has been the thread through the watch’s life. Some things never change!

With such a long lifespan, the Rolex Air King provides many options on the market. We thought we’d take a look at some iterations of the Air King and mention the references we think are attractive to own. 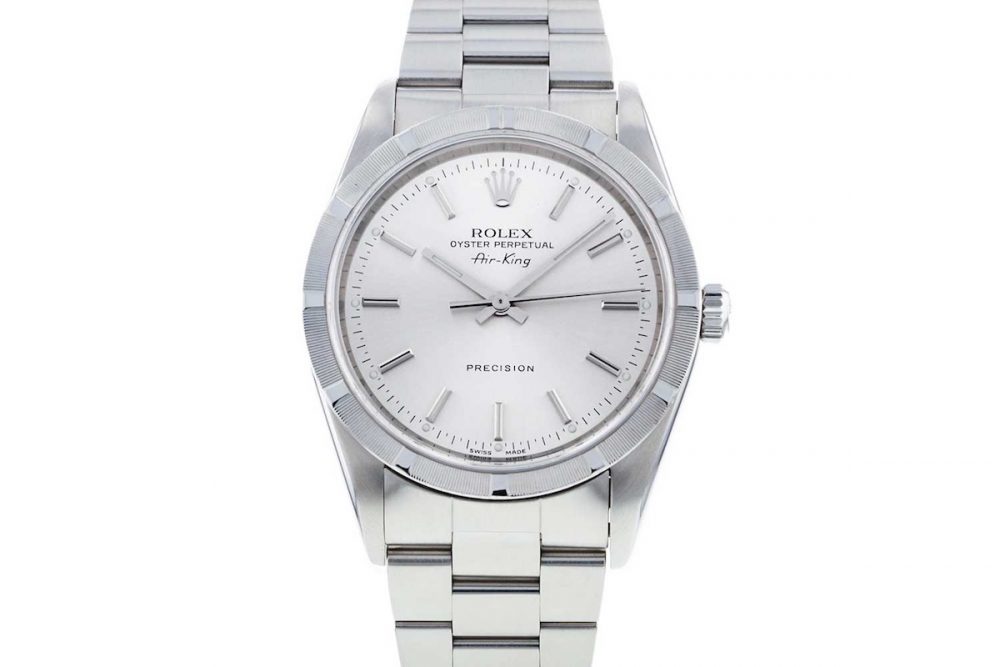 The perfect entry level Oyster with a great heritage? We believe that the Air King is this and much more besides. The timeless and perennial font of the Air King logo and the classic 34mm proportions make the Air King the perfect choice for those looking to buy their first Rolex with a sporty twist. This reference 14010 has the classic pre-COSC ‘PRECISION’ text and a cool engine turned bezel. The solid-link Oyster bracelet is the king of sports bracelets and will ably carry your Air King from bar to yacht and every party in between! 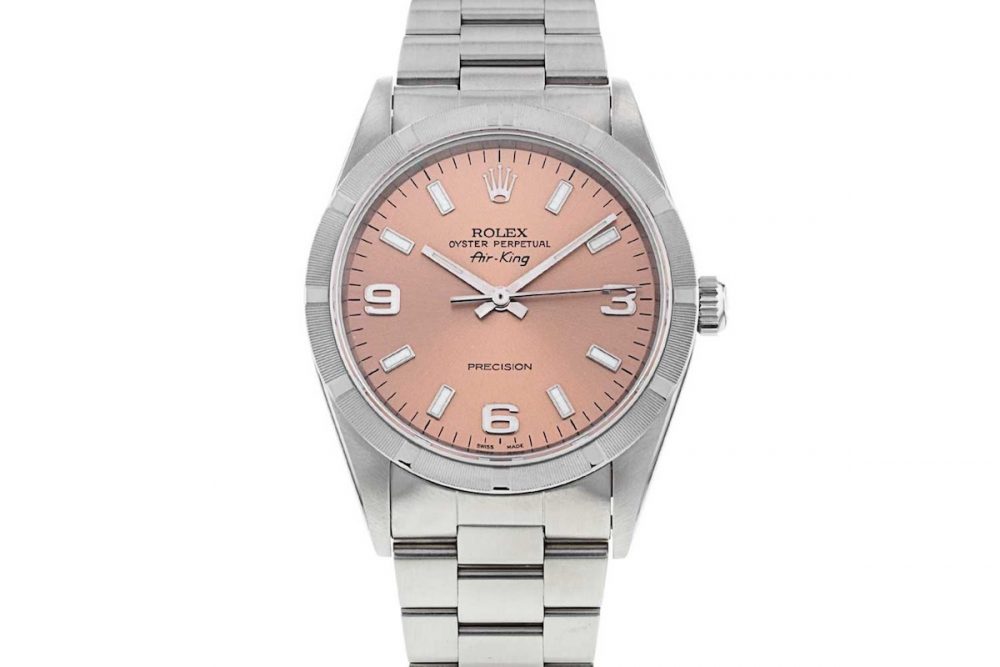 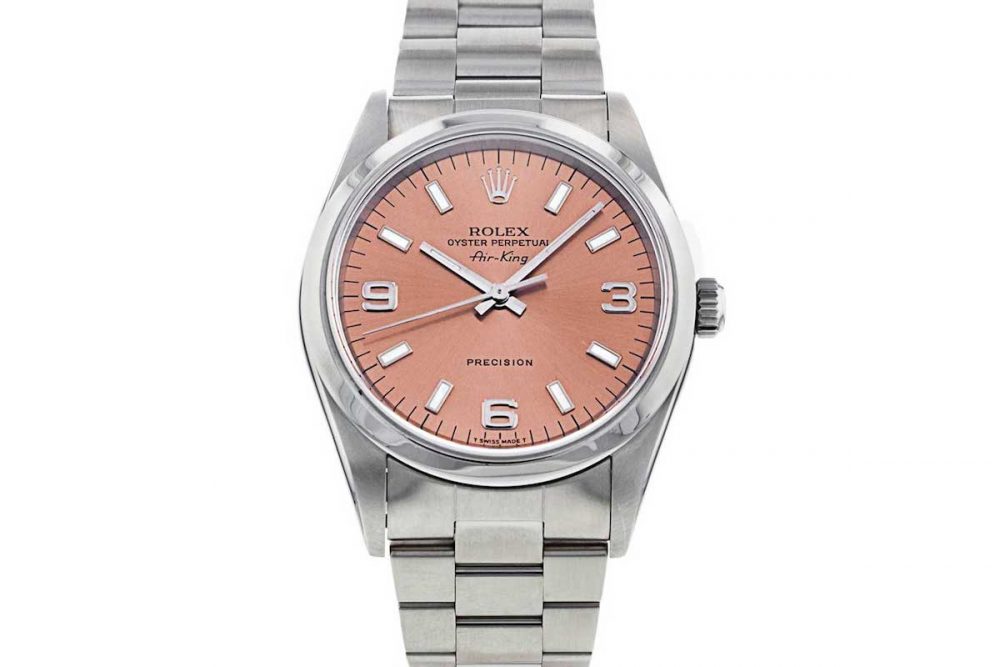 Trends come and go, but style is timeless. One timeless look that is on-trend at the moment is the salmon dial. Finding really good examples can be difficult, so we have taken the pain out of the hunt for you by selecting these two beautiful salmon dial Air Kings. A classic with a twist, this is a watch for the connoisseur looking for something a little off the beaten track. Whether you want the sleek smooth bezel or prefer the more dressy engine turned bezel, we have a watch for you – both of which come with papers. In a nod to the Air Kings past life as an Explorer, both watches also come with Arabic 3-6-9 applied numerals. Sporty salmon is definitely a choice worth making. 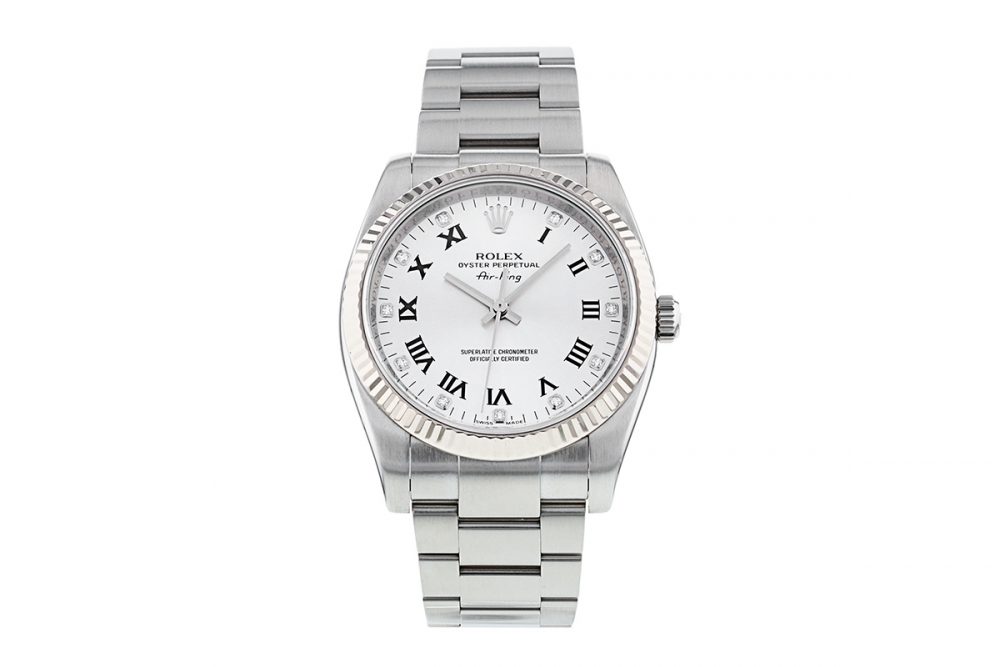 Rolex and diamonds have an illustrious past and any watch enthusiast with more than a passing interest in Oysters will be familiar with the gem-set pieces from the House of Wilsdorf. But it doesn’t always have to be Rainbow Daytonas or pave-set Day Dates; sometimes less is more. We have selected this stunning Air King reference 114234 with white gold fluted bezel and discreet diamond hour markers. The classic 34mm Oyster case remains, but the subtle sparkles on the dial lift this watch into a new dimension. Complete with box and papers, with this set you’ll be all set for a world of possibilities!