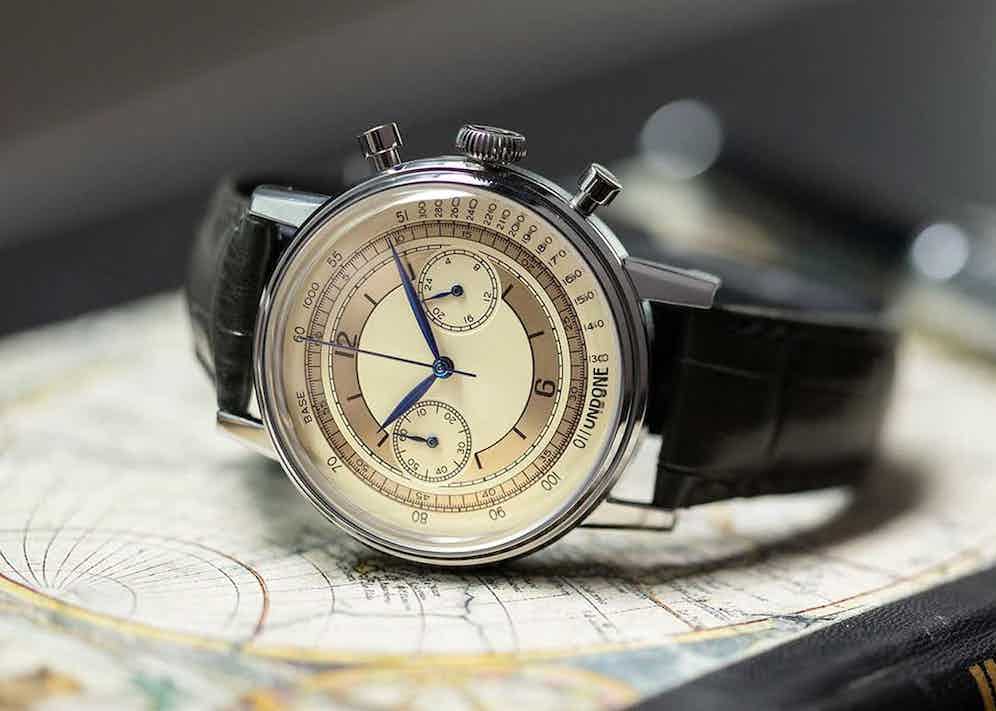 I love chronographs and I’m not standing alone in my field of love. Vintage or modern; sporty or dressy; stealthy steel or generously gem-set – the world is your oyster when it comes to the start-stop-reset sector of watch collecting. For many years chronographs have been utilised by the military, medics, racing drivers and Dads timing their kids’ pizzas in the oven (or is that just me?). The chronograph’s icon silhouette of stopwatch pushers flanking the winding crown is as iconic as any horological layout and it is a complication that collectors treasure above all other. A tool watch born out of necessity, as all great watches are, has become a style statement that is hard to match and so we are delighted to present our latest limited-edition watch with UNDONE – the Vintage Chronograph with ‘Sector Dial’. And so excited was I by this watch that it has become known as the Ross Watch here at Revolution. And so, here it is: The Ross Watch… 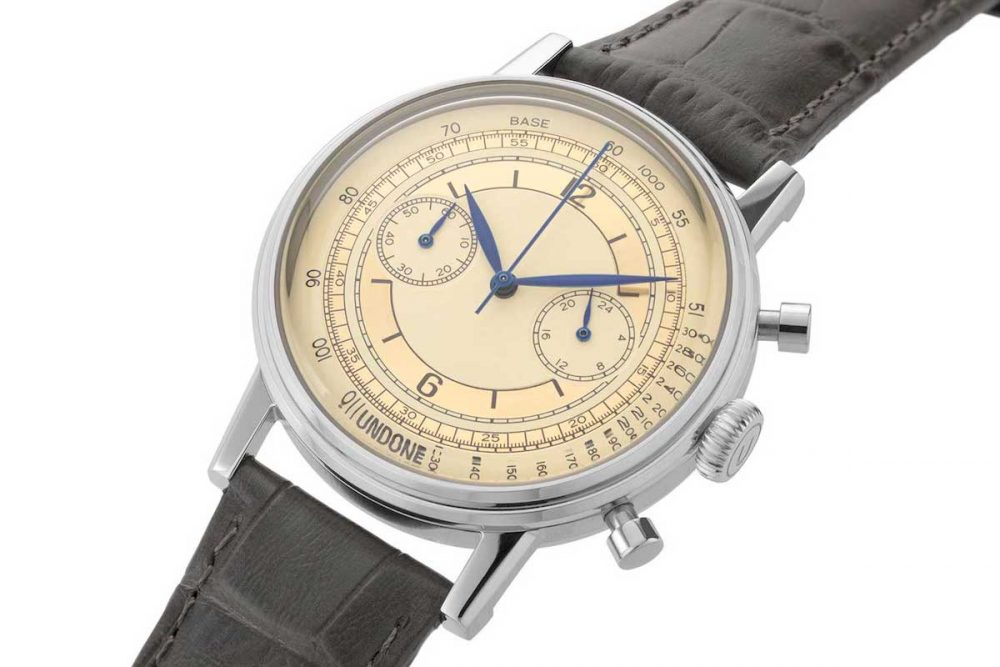 The UNDONE Vintage Chronograph for The Rake & Revolution featuring a vintage-inspired sector dial.

This watch harks back to the golden age of mid-20th century chronographs and so let’s take a look back at the origins of the story that has inspired this latest Revolution Edition.

You’ll notice immediately that the watch, and its 40mm case profile, pays homage to the vintage waterproof step-case steel chronographs of the 1940s, but packaged in a sleek and modern interpretation. The case is made from 316L stainless steel, which is used by the majority of the luxury watch industry, and waterproof to 30 meters. The crystal is a hardened Dome K1 variety and the movement powering the watch is a Seiko VK64 mechanical-quartz movement with flyback chronograph function, and Undone has configured the movement so you have a 24-hour indicator at three o’clock and a 60-minute chrono counter at nine o’clock. Why? So that there is no quartz ticking seconds hand. When you activate the chronograph, it sweeps just like a mechanical watch.

The star is of course the dial and we took inspiration from those beautiful chronographs from the mid 20th century, which featured truly amazing sector or scientific dials, the most beautifully balanced dials of this era in our opinion. Sector dials first appeared in pocket watches in the 1920s and 30s and then began appearing in wristwatches. Also known as scientific dials, the were highly legible and easy to read accurately. These dials used a central chapter ring divided into sectors, with emphasised chemin de fer minutes and seconds tracks to enhance accurate timings. In addition, they featured enlarged scales such as tachymeters, which calculated the average speed of an object over a fixed distance (e.g. 1km) or pulsometers for calculating pulse rates within 30 beats or even a combination of both. 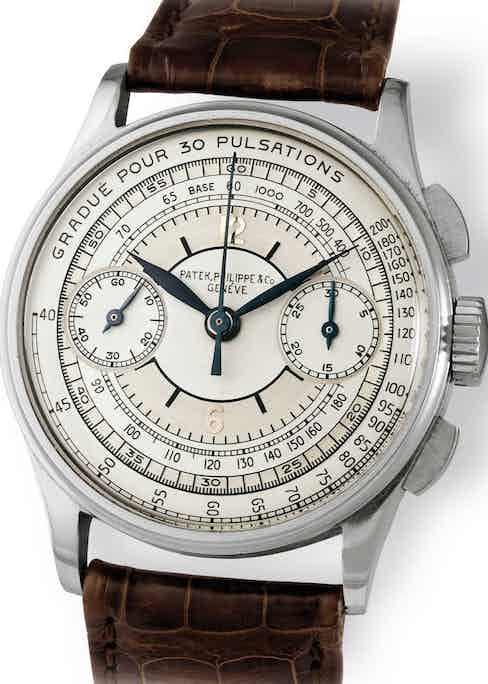 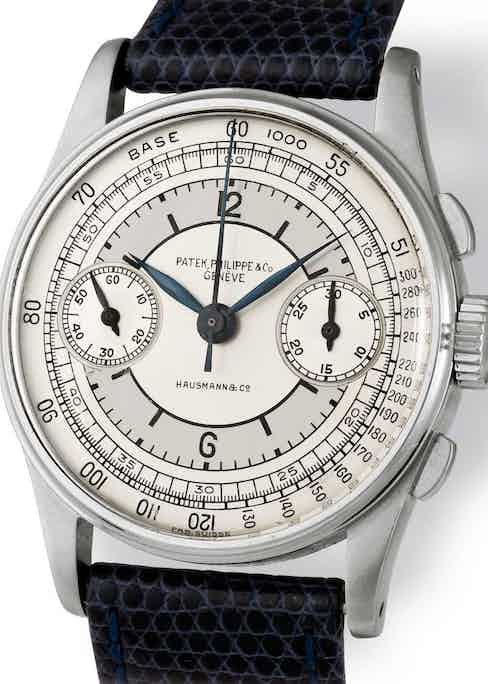 The balance is wonderful and Art Deco-esque in its execution and that is why we wanted our new Revolution Edition to have this dial. The dial that we designed with UNDONE a stunning two-tone version, cream and gold, that is wonderfully complimented by blued steel hands. That classic look of gold tones or accents on the dial in a steel watch is a signature of the era and we think it makes our new watch rock. So classy, so vintage and so cool!

The chronograph watches of the mid-20th century are truly, jaw-droppingly beautiful and some of the most sought after feature the iconic and aesthetically pleasing sector dials. They were made by a number of brands and some of the most desirable were made by Patek Philippe, such as the references 130 and 1463 dials. Other notable vintage sector dial chronos include the Longines 13ZN, Rolex 2508 and the Omega Calibre 33.3. 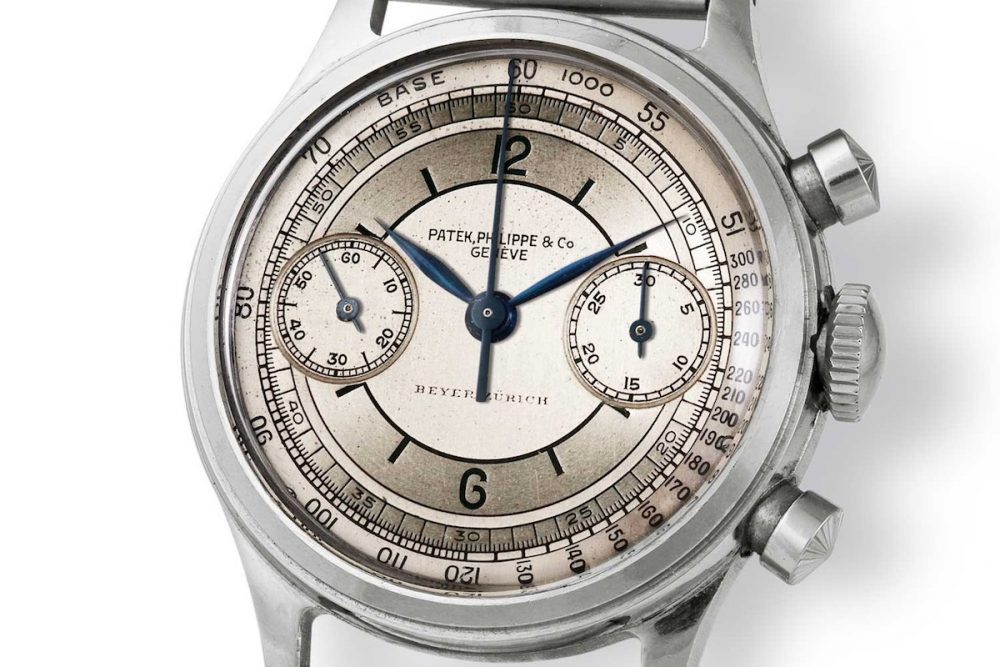 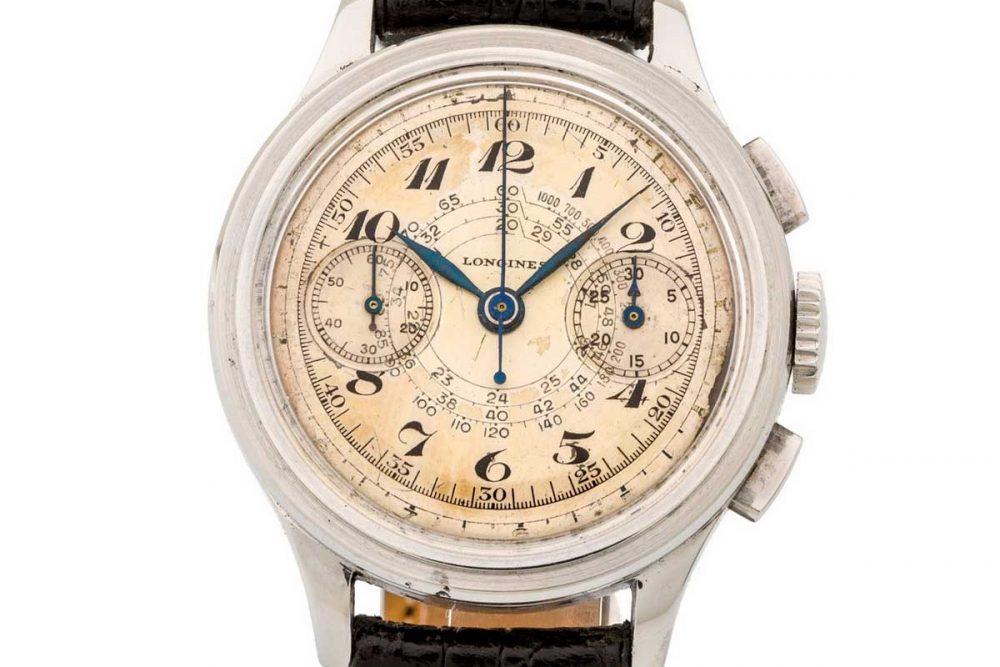 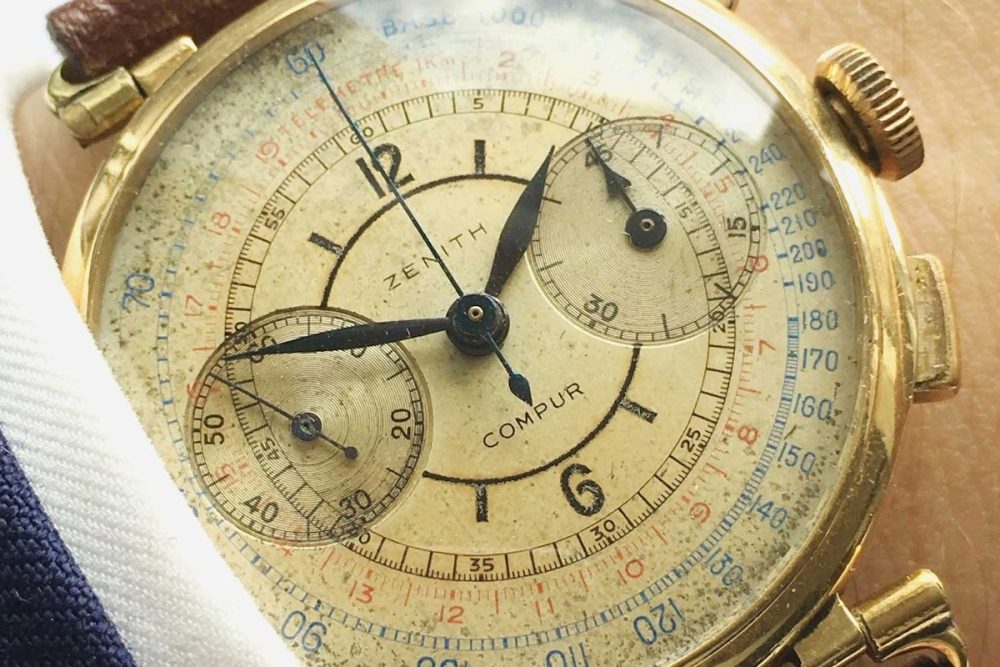 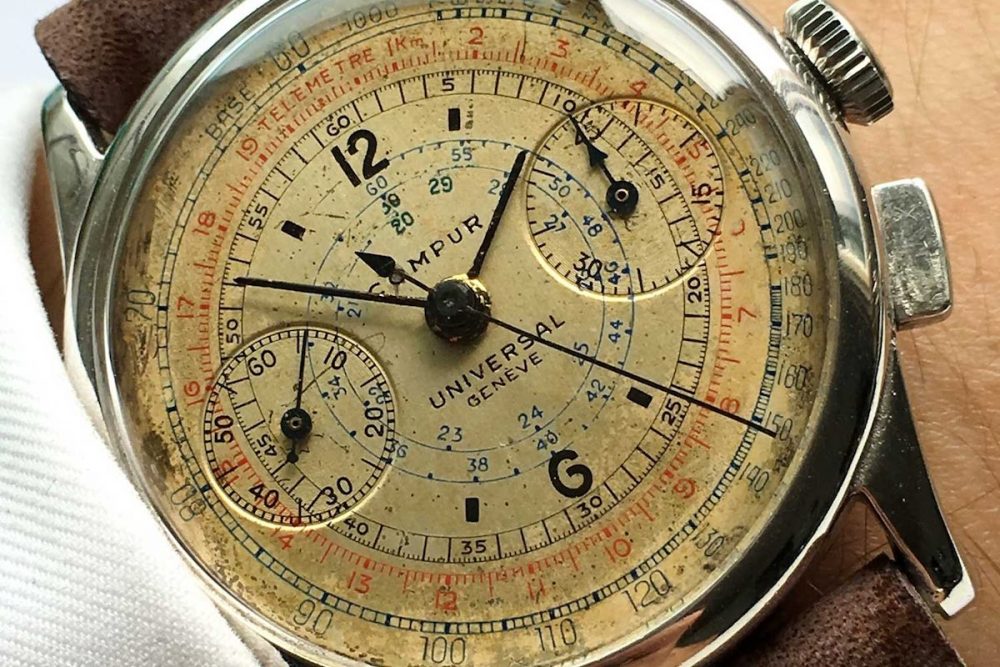 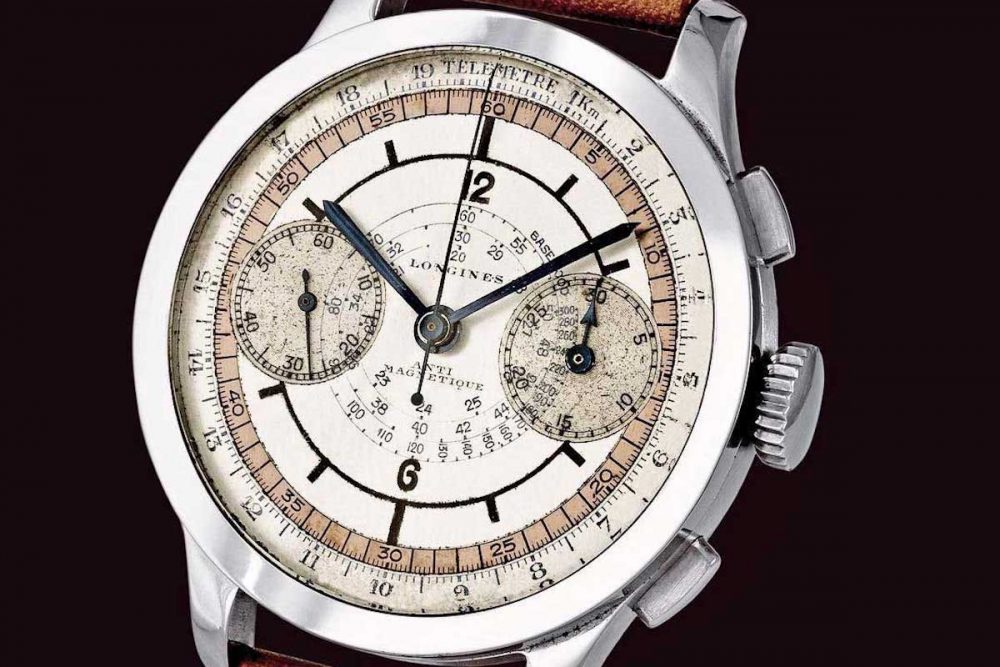 The Revolution watch comes as standard with a leather strap, but if you are a true connoisseur of these vintage chronos then there is an upgrade option where you can include a steel beads-of-rice bracelet. 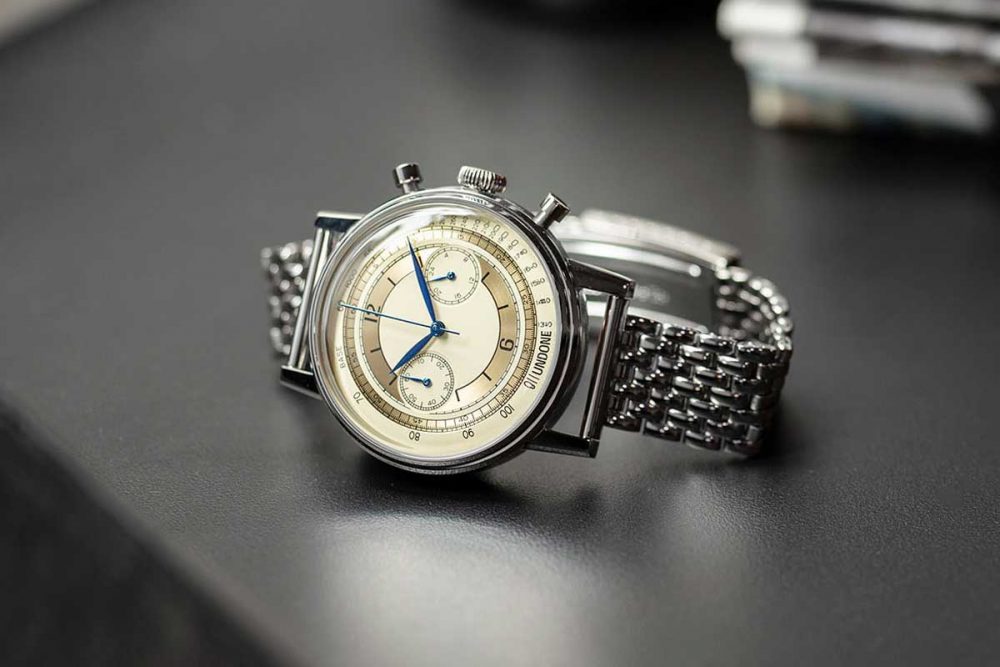 The watch comes on a leather strap but can be upgraded to include a high-end stainless steel ‘Beads of Rice’ bracelet.

If you were to take a poll of collectors’ favourite era for chronographs, I’d bet a hefty wager that the mid-1940s through to the end of the 1960s would be seen as the golden era. The wrist-mounted chronograph can be traced back to the 1920s where it was anything put a regular sight and yet was becoming more and more in demand as a tool for the military and within the scientific community. The watches of the 1920s and early 30s were essentially wrist-mounted pocket watches in gold, silver or plated brass as the quality of steel was not yet good enough for a watch. However, all that changed at the end of the 1930s as British steel became available in a quality and durability that made it perfect for wristwatches; especially for military use where tool watches were in high demand. At this time the telemeter scale was used by the military, to enable them to monitor enemy positions when under fire. Essentially, a General started the chronograph when he saw the flash of artillery and then stop it when he heard the sound of the explosion – he measured the time lapse between light and sound. The telemeter scale was developed to easily tell the operator how far away the explosion had taken place. 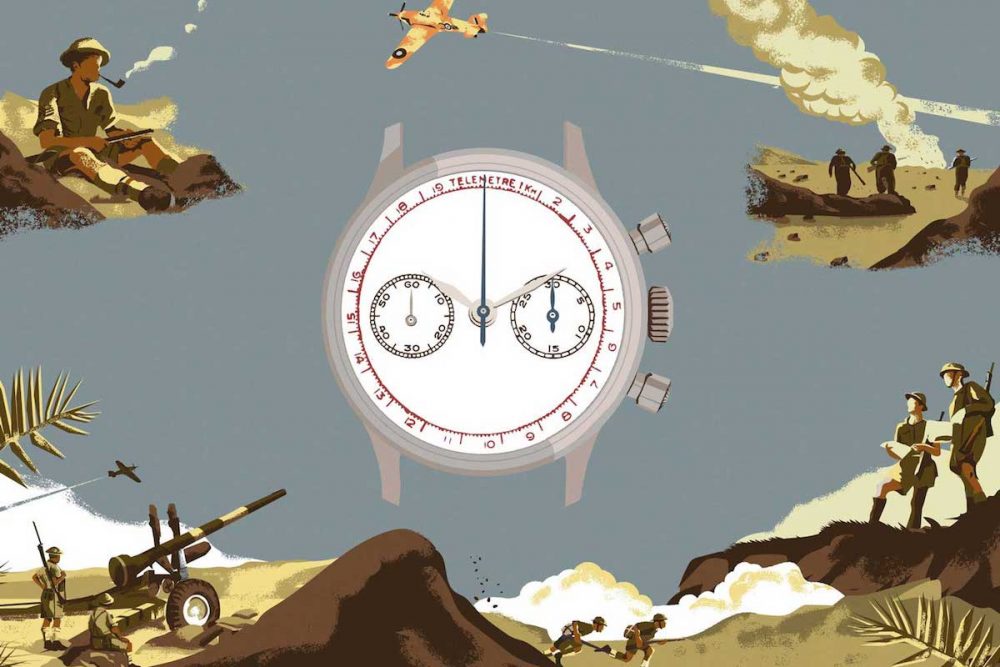 The telemeter scale was developed to easily tell the operator how far away an event had taken place (Image source: A Collected Man)

During the 1960s motor racing had a large surge in popularity and so watch manufacturers began producing chronos with scales that enabled not only the time of an event to be measured, but also average speeds reached. The most commonly used scale for motor racing was the tachymeter, which was printed on the outside perimeter of the dial. Using this scale, one could measure the time it took to cover the distance of a mile and see at a glance what the average speed was over that distance. Over time this scale made its way onto the bezel, as seen on a Rolex Daytona or Omega Speedmaster, but early on it was always printed on the perimeter of the dial. 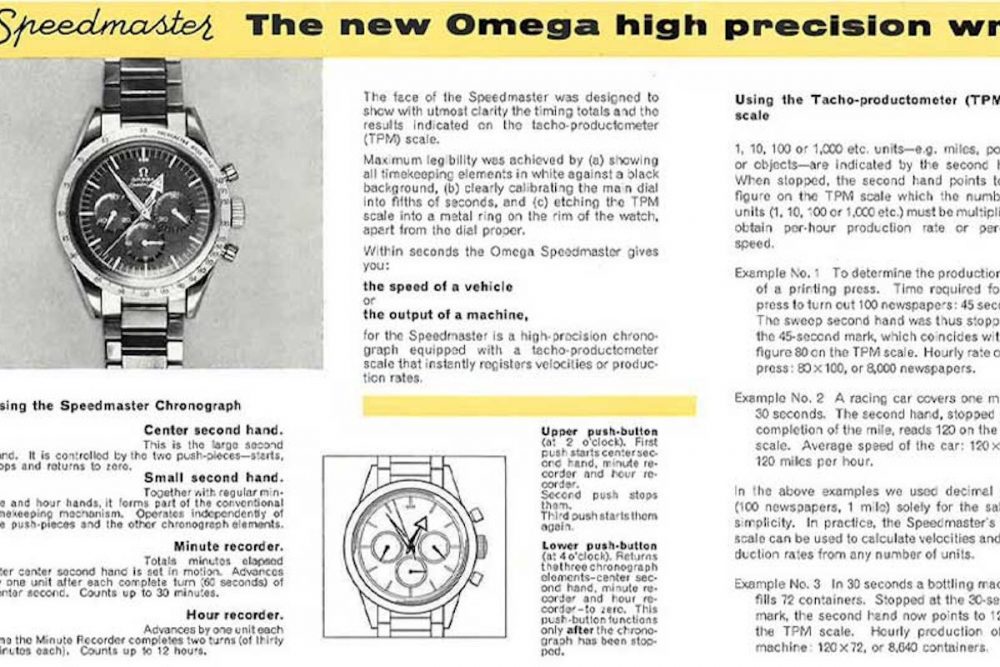 The Omega Speedmaster started its history as a racing chronograph

In reality, finding a sector dial steel waterproof chronograph from one of the most important brands would cost anywhere from 50,000 dollars up to figures in the region of half a million dollars for a Patek Philippe 1463. What Revolution is offering is a watch that harks back to this wonderful golden age and celebrates the vibe and feel for a very wallet friendly US$339; and we think that the watch looks its best when paired with the high-end beads-of-rice bracelet which just completes the overall vintage appeal of our UNDONE Vintage Chronograph. We believe that this chrono is a lot of watch with a lot of fun at a decent price point. And in these times of uncertainty – couldn’t we all do with a little bit of fun? 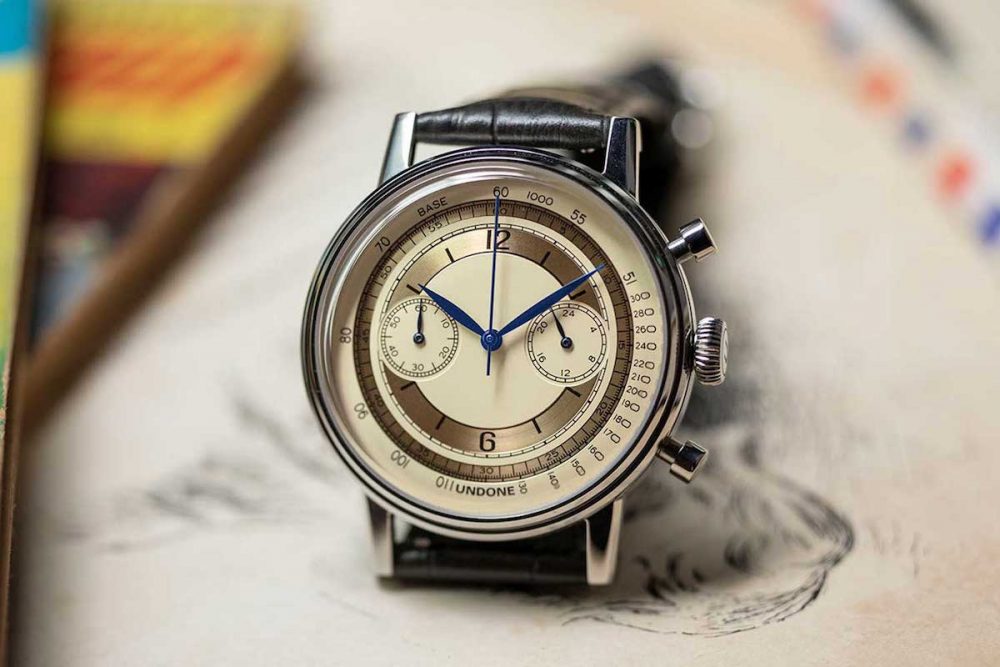 The UNDONE Chronograph for The Rake & Revolution featuring a vintage inspired sector dial.