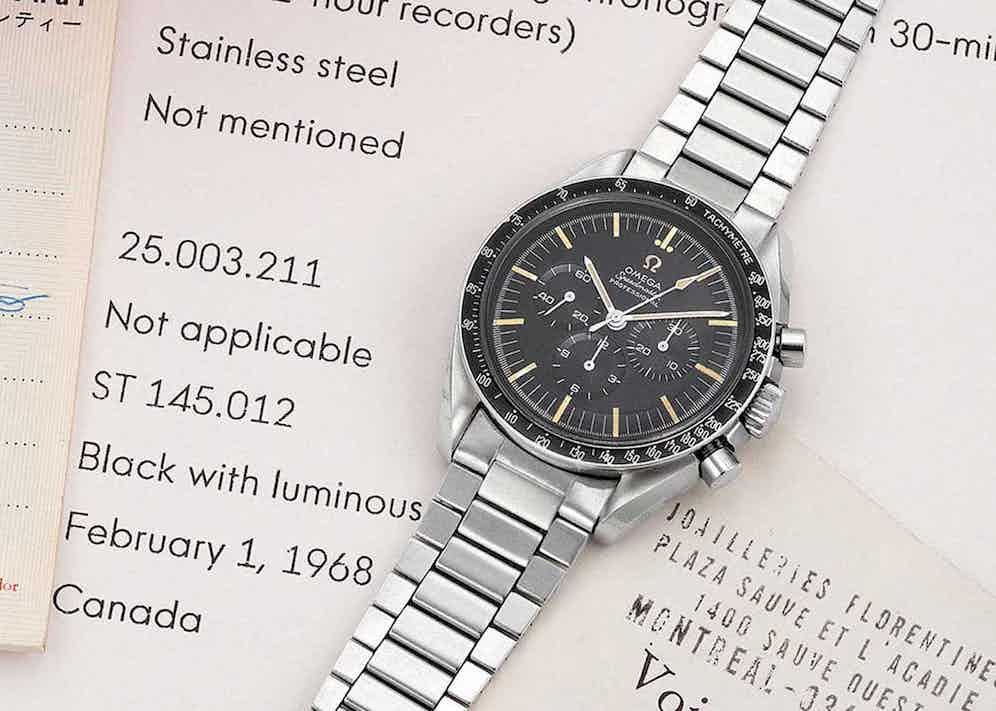 The term, “end of series” has become one of the new buzzwords in the watch collecting community, signing that a watchmaker is about to cease production on a particular line or reference of its watches.

If we were to consider then the end of series reference in the lineage of the Calibre 321 equipped Omega Speedmasters, that would have to be the reference ST145.012. The 145.012 was produced from 1967 through to 1968, with some deliveries made in the earlier part of 1969. Formally speaking, the Caibre 861 equipped 145.022 was introduced as the new generation of the Speedmaster in 1968. 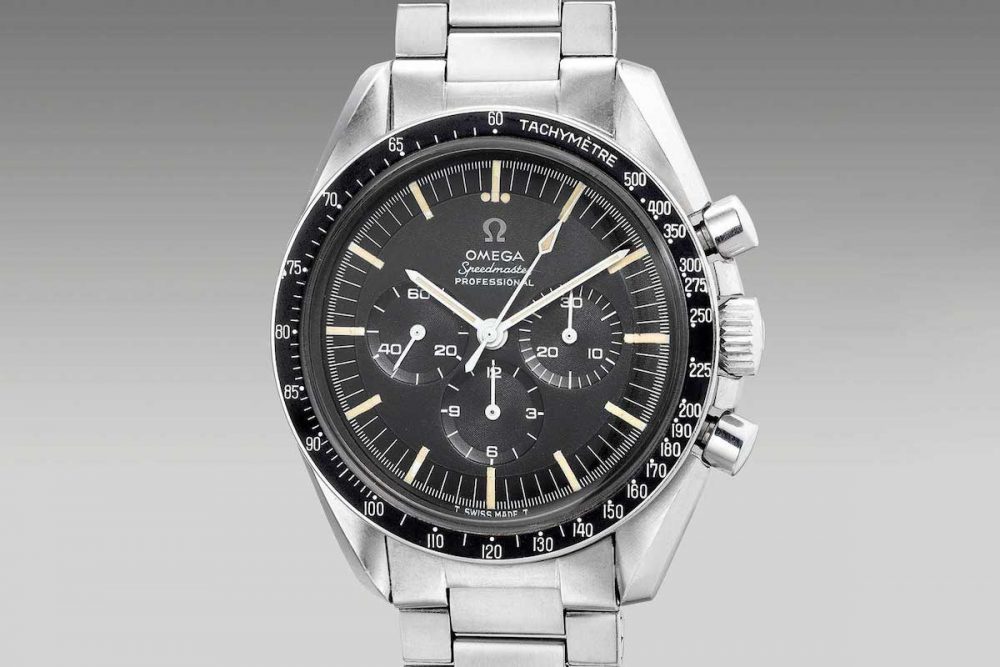 A excellent example of the Speedmaster ref. 145.012 sold by Phillips Watches at their July 2020 Hong Kong auction (philllips.com)

The 145.012 featured the now familiar lyre lug asymmetric case. Although differing from the preceding 105.012, the 145.012 had larger chronograph pushers measuring in at 5mm x 3.5 mm, according to Speedmaster101.com, here. From there we see that it had the stepped black dial with tritium lume hour markers that run all the way through the minute and the applied Omega logo and the word “Professional” listed in the three line configuration.

Hands used for the 145.012 were batons for the hour and minute hands. Chronograph seconds hand was of the spear variety, but collectors have clocked both flat and pointed ends within the lifetime of the reference. Of course it’s bezel is one of the more known identifiers for its lineage, having been fitted with the black “DON” BASE 500 bezel.

What is interesting from there is that the 145.012 beyond the standard configuration, Omega used the reference to create some of its most desired and animated dials from the era, namely: the Ultraman and the even rarer, Black Racing Dial.

But aside from it being the end of series reference, why is the 145.012 of worthy consideration for any robust vintage Speedmaster collection or even someone who is only getting started? Here are some points to help make our case.

The story goes that, James H. Ragan, retired NASA Project Engineer and Program Manager and Petros Protopapas, OMEGA International Brand Heritage Manager chronicles in the tome Moonwatch Only that in the lead-up to the Gemini missions, the Agency saw the need to “test, select and certify” a complete array of standard equipment for the astronauts’ use. One such equipment on the list was originally a request that was made by the astronauts themselves, “a watch for use during training and flight.” 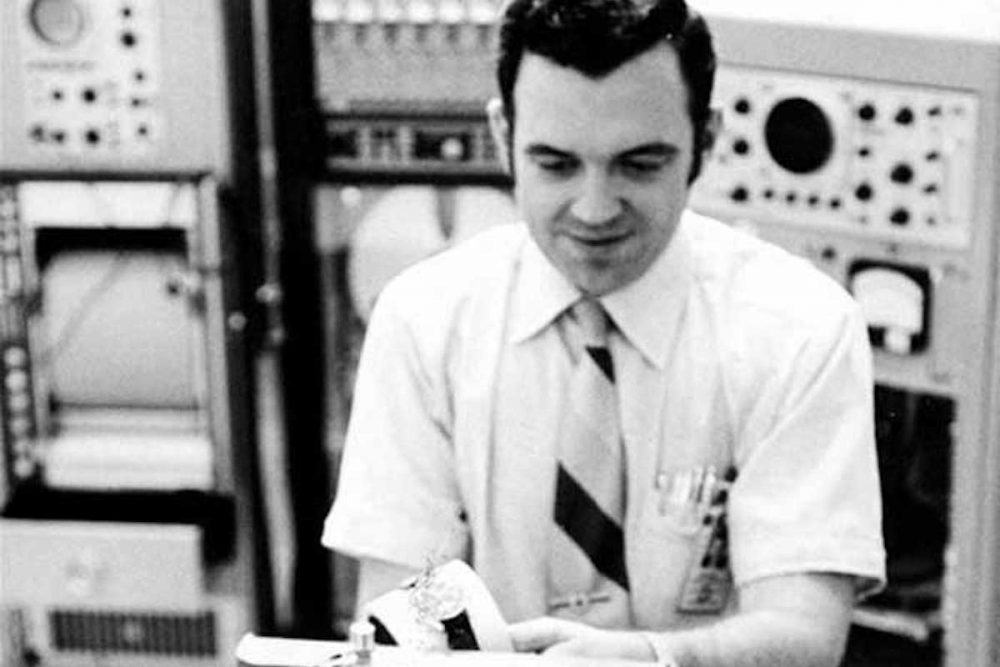 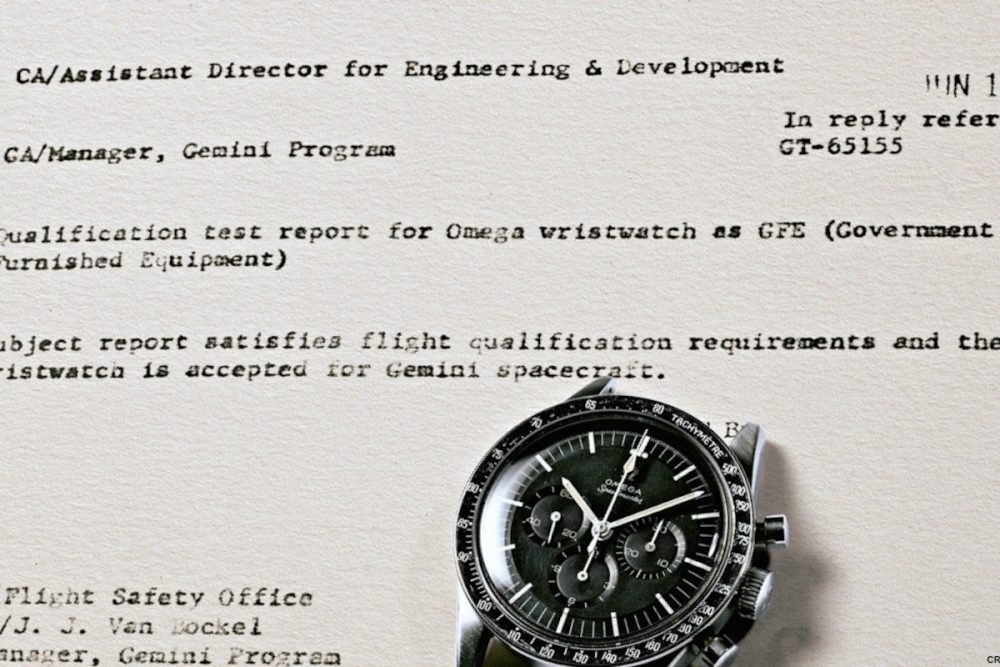 Flight Crew Operations Director Deke Slayton took on the task of finding this watch by issuing an internal memo that listed the need for a, “highly durable and accurate chronograph to be used by Gemini and Apollo flight crews.” The memo then passed on to the hands of James Ragan. It was his task to send out the request for quotation to a list of watchmakers, stated earlier by Deke Slayton.

Three brands responded in time for NASA to take the proposed timepieces onboard for testing. These watches were: a Longines-Wittnauer 235T, a Rolex chronograph reference 6238 and, lastly, an Omega Speedmaster reference 105.003. Curious thing to point out here is that the Speedmaster used Omega’s own version of the Lemania 2310 movement, which is the Calibre 321. Whereas the Rolex and Longines timepieces used their own versions of the Valjoux 72. 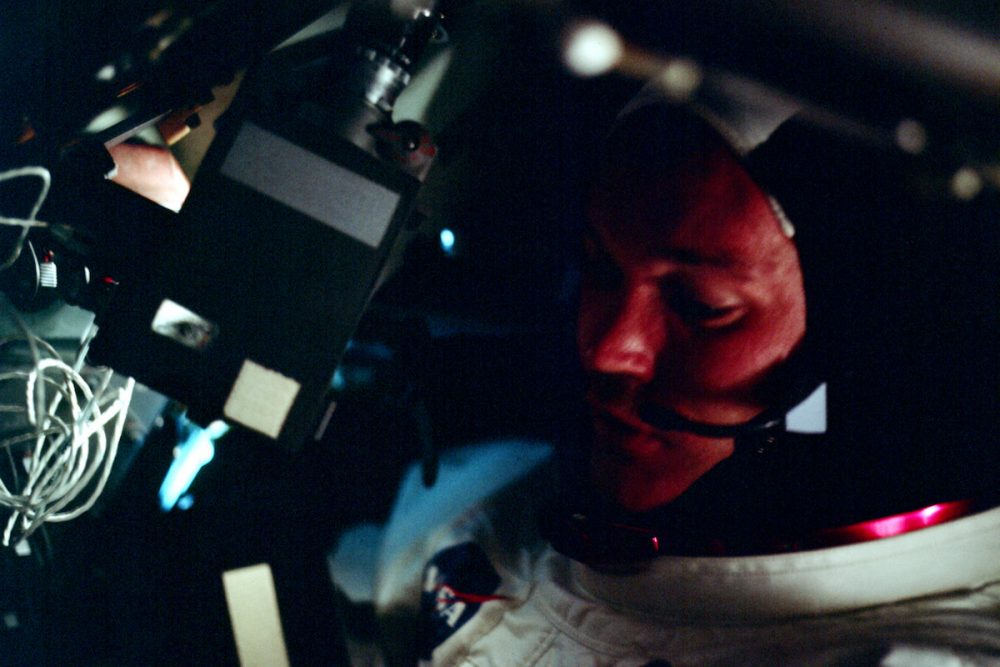 Command Module Pilot Michael Collins is known to have worn a Speedmaster 145.012 on his wrist during the Apollo 11 flight; he remained in the orbit around the moon while Aldrin and Armstrong landed on the moon's surface on the Lunar Module (NASA.gov)

The rest, as we now know is history, with the Speedmaster having survived the battery of tests that NASA had subjected the watch to before marking it, “Flight Qualified for all Manned Space Missions” on June 1, 1965. The references of the Speedmaster that eventually went to the Moon, specifically were the 105.012 and the 145.012.

Writes The Rake & Revolution’s founder, Wei Koh, “For me, the Lemania 2310 or CH 27 — as was its name while in development by the brilliant Albert Gustave Piguet, the movement maker’s technical director — is the most beautiful, historically significant, and yes… the greatest chronograph movement of all time.”

He goes further to expound that there are three reasons why he makes such a claim on behalf of the Lemania 2310, “The first is the great technical leap forward it represented in 1942, when it was first launched. At 27mm in diameter and 6.74mm in height, it was the world’s smallest chronograph movement then, beating both the 13.33Z and 13-130, which were both 13 lignes (29mm), by a considerable margin. Being a smaller-sized movement made the 2310 incredibly adaptable to different case styles and configurations. 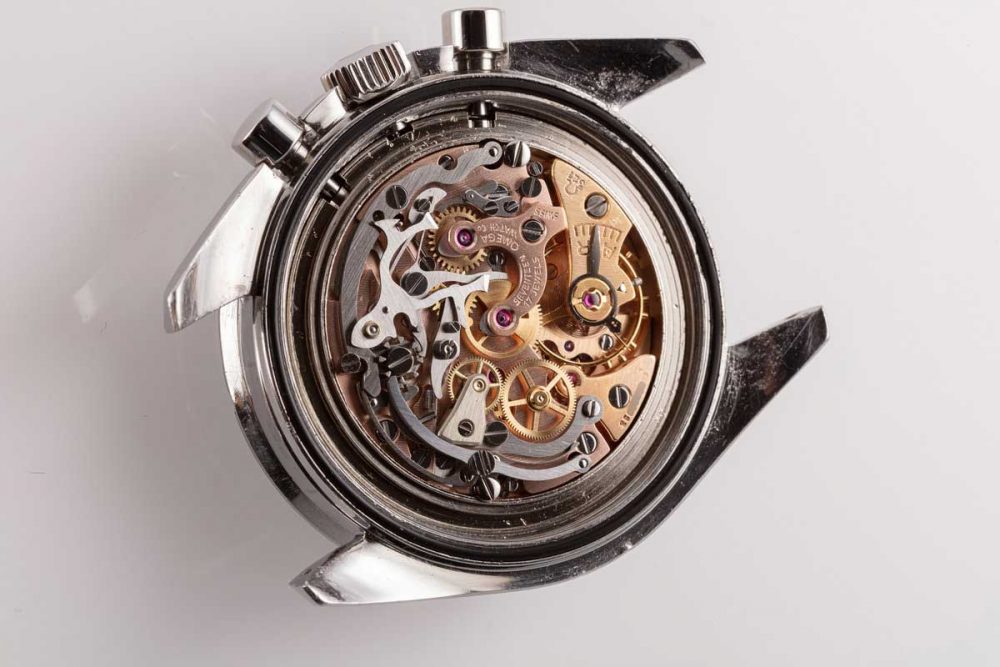 “The second thing is that, from 1946 to 1968, it was used by Omega as the calibre 321, where it had an unrivalled track record for incredible reliability and performance, culminating in it powering the only watches that passed NASA’s torture test for certification for use in space.

“The third: as it was really the only manual-wind, column-wheel, classic chronograph being manufactured in ébauche form in the ’80s, it played a seminal role in the Swiss watch industry’s recovery from the Quartz Crisis, allowing maisons such as Patek Philippe, Breguet, Vacheron Constantin and Roger Dubuis to collectively stage the resurgence of the mechanical chronograph. Two of these brands, Patek Philippe and Breguet, even built split-seconds versions of this movement.”

Wei furthers his case for the 2310 in the following article, here, which you must have a read of.

Funny thing is that where the term end of series in present age tends to garner a premium on its price tag, the 145.012 is still by far the most approachable of the Calibre 321 Speedmasters.

In his article, the Omega Speedmaster Professional 145.012 Buyer’s Guide, Fratello Watches’ Robert-Jan Broer explains that the 145.012 is the reference with the Calibre 321 was made in the greatest volume. In the context of looking at sales in 2019, RJ writes, “The Speedmaster Professional 145.012 is one of those references with Calibre 321 movement that is still relatively affordable. Where its predecessor is way over 10,000 Euro, the 145.012 has (most of the time) a friendlier price tag. But perhaps not for long, who knows with the current craze for Speedmaster watches. Although it is the Calibre 321 Speedmaster with the highest production, this doesn’t mean the market is flooded with them like it was the case 10-15 years ago. The well has dried up quite a bit, and you have to bring some good money to purchase one.” 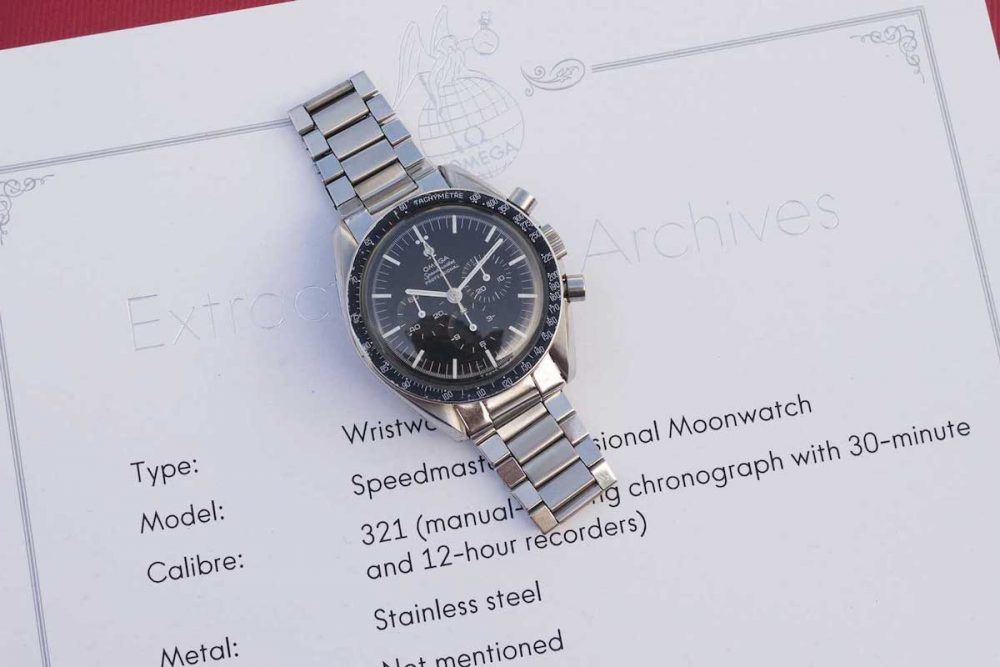 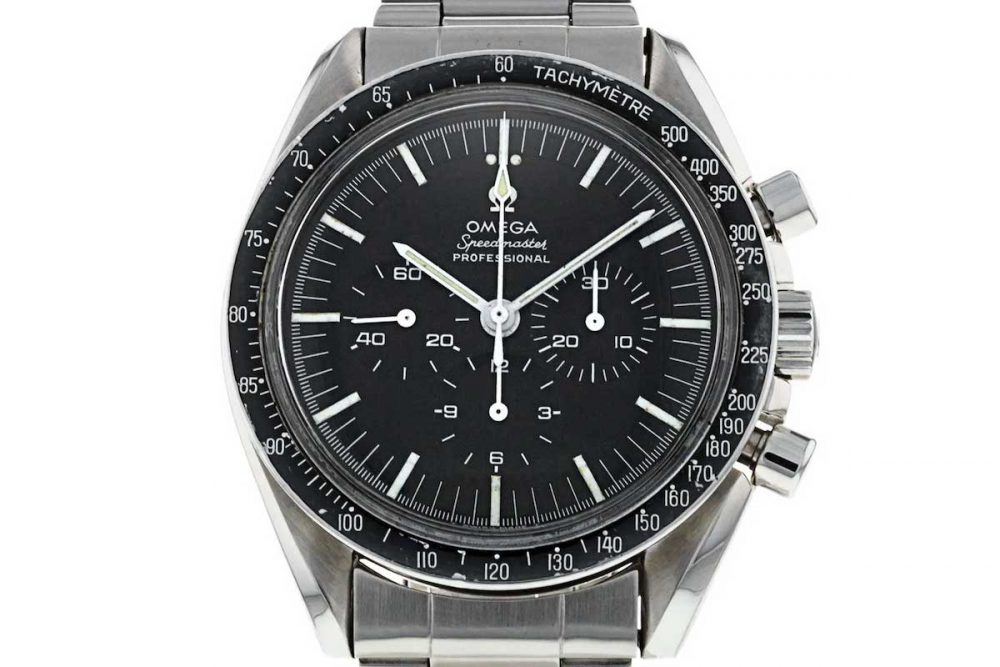 Armed with the above information if feel yourself geared to go hunting for a 145.012, however, you’re feeling reluctant because of the nebulous universe of vintage watch buying, Revolution would like to present you with the opportunity to acquire an instance of the last Speedmaster reference powered by the original Calibre 321, sourced through our partnership with Watchfinder & Co. The watch comes complete with a 14-day return window and Watchfinder’s own 24-month warranty.