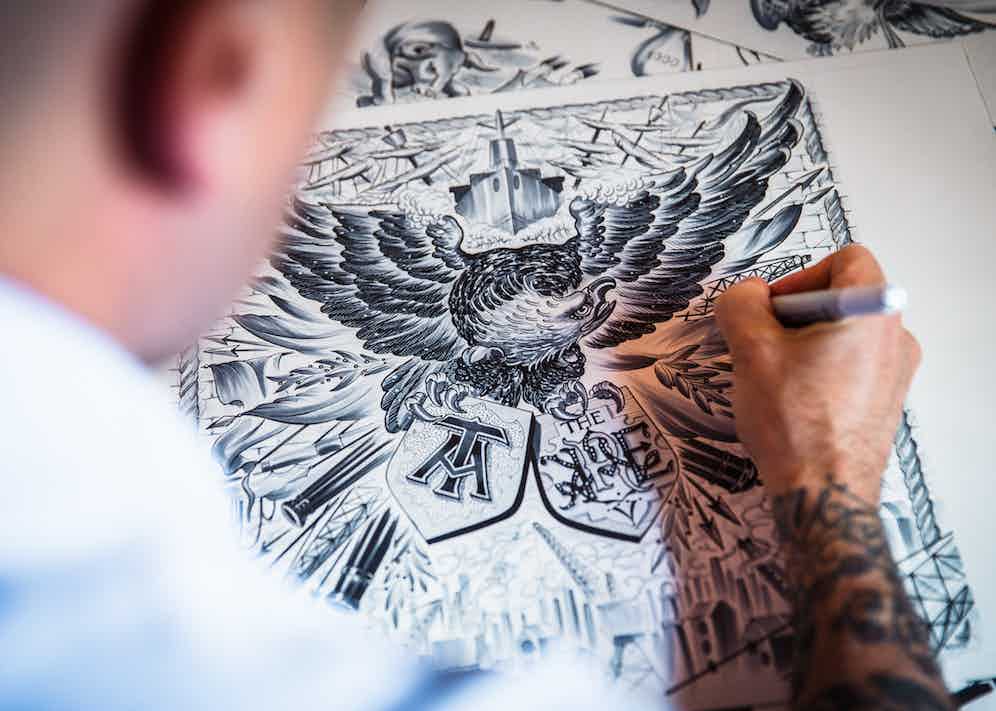 Another month comes full circle, and so does the season. Now, with the gradual coming of autumn, the birds no longer squeak irritatingly in the bushes, the trees have come over all dandruffy, and baby sheep have now desisted from frolicking gaily across pastures green. Thank God.

Let’s be clear, The Rake loves the onset of autumn, simply because the weather’s deterioration ushers in what is arguably the most formal time of the year in terms of classically correct men’s dress. The opportunity to experiment with different textures, tones, weights and layers has returned to us once more. Before too long, overcoats will be coming out to play, heavy knitwear and suede blousons, your favourite flannel three piece suits will be back in action, and the prospect of wearing neckties and pinned collars will no longer fill you with sweat-inducing dread.

In light of these seasonal sartorial developments, we’ve been doing a spot of thinking. Collectively, we’re hankering once more for a refined sense of formality and classicism in our clothing and as such, this month sees the introduction of a new series on TheRake.com, coming in a combination of snappy short form stories and short films (which you’ll also be able to check out on The Rake’s YouTube channel), called ‘Style Hack’, where we’ll be setting you straight on some of formal menswear’s fundamentals in partnership with men in the know. Stay tuned for more on that imminently.

Even though we’re talking about classical men’s style, please don’t misunderstand us – we understand that modern menswear (whether sartorial or not) has to be directional and design driven, hence why this month celebrates ‘Art and Design’, a subject we’ll be exploring in every which way.

First up, our fabulous team of in-house writers (Benedict Browne and Anna Prendergast – without both of whom I would simply have a nervous breakdown) will be penning a series called ‘The Director’s Cut’, exploring all things intriguing about the most rakish film and theatre directors of the century. The proportion of rakish individuals who are Directors in one way or another is curiously high, perhaps because to direct is to play God; to display sufficient creative vision to create an entirely new universe, fill it with your own aesthetic choices, your characters, your voices. In essence then, these most rakish individuals are all powerful, and yet they are entirely bound to success or failure by the impact of the world that they create upon their audience. It is this paradox of the vulnerable creative god that has spawned some of the most intriguing rakes of the past one hundred years, and we hope that you’ll enjoy exploring their lives and work as much as we do.

"It is the paradox of the vulnerable creator that has spawned some of the most intriguing rakes of the past one hundred years."

Our stalwart collection of contributors will also be proffering some art and design-driven pearls of wisdom for you. Resident contrarian and Editor-at-Large Nick Scott shall argue in his own inimitable style that hallucinogens should be legalised for artists and that modern poets simply aren’t cool any more, whilst the venerable Ed Cripps will bring us a three part series on the English hell-raising actors of yesteryear, from Terence Stamp to Richard Harris. Asia Editor-at-Large Christian Barker is interviewing Australian artist to the rock-stars, Martin Sharp and Josh Sims dissects one of the most influential outfits to ever grace the silver screen. We’ll also be presenting our usual array of craft stories and factory visits – offering some unique insights into the design processes that underpin some suitably elevated creations, from artisanal gin distilling to traditional Macclesfield silk printing.

We also have some rather exciting new releases coming to shop.TheRake.com this season, which it would be amiss not to foreground. From an excruciatingly beautiful French-blue double-breasted dinner suit from contemporary Savile Row tailors Chester Barrie, to an exquisite denim jacquard (yes, that’s right, denim jacquard) smoking suit from Cifonelli Ready-to-Wear, get set for some serious new tailoring collaborations. Sticking with the denim theme, we also have a rather exciting three-way collaboration with Turnbull & Asser and maverick designer Mo Coppoletta, a sneak peek of which can be glimpsed in the image above.

In short, it's all systems go for the new season; we hope you enjoy diving into this world of art and design. We hope also, given that we too live or die by the world we create for you, that you will look favourably upon this intrepid band of journalists, who endeavour to inspire, educate and entertain you so.