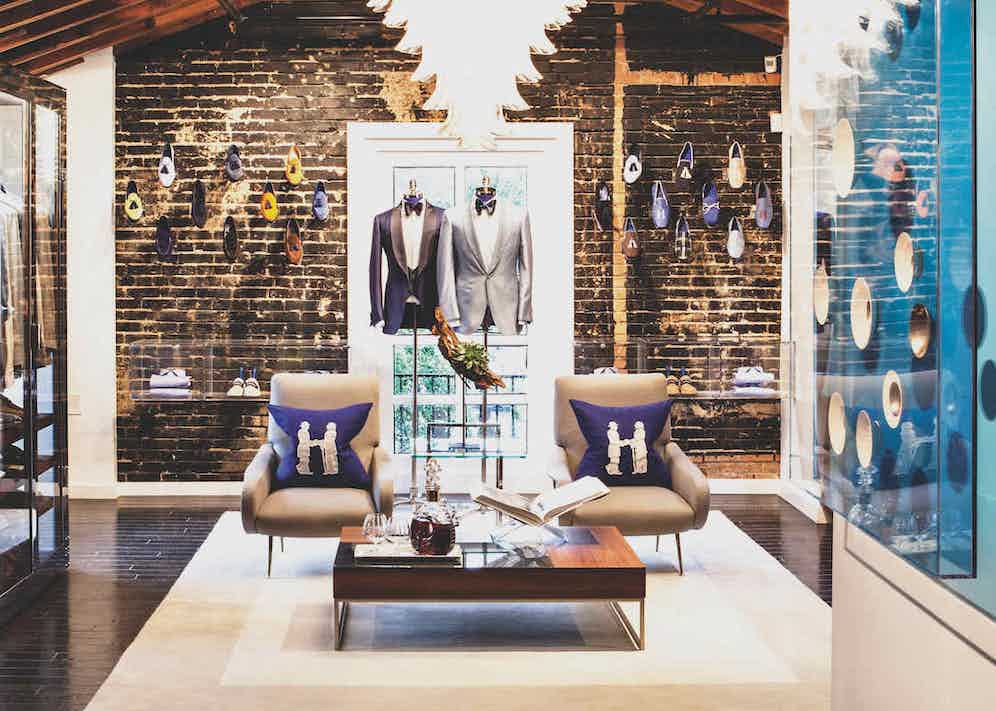 Texas, the Lone Star state, where the stars at night are big and bright. It might not be renowned as a fashion hotspot, but it is the second wealthiest state in the U.S. and the home state of the Dauphin of men’s style, Tom Ford. Overlook it now and you will miss what is a flourishing sartorial scene, led by the boutique brand Hadleigh’s.

Hadleigh’s, which describes itself as a ‘custom clothier’ and is the brainchild of married couple Ed and Gable Shaikh, can be found in the hallowed grounds of Highland Park Village, Dallas, the first self-contained shopping mall in the U.S., and, since 2000, one of the country’s National Historic Landmarks. Ed Shaikh, the Creative Director, shows The Rake around the complex, pointing out the spot, he says, “where it all started — I had my first interview for Ralph Lauren over there seven years ago”. It is a testament to Shaikh’s success that his store now counts his former employer as one of his neighbours, alongside the likes of Tom Ford, Loro Piana, Brunello Cucinelli and Hermès.

The simplicity of the Hadleigh’s store and atelier is alluring, more reminiscent as it is of a showroom than a typical shop. There are no eccentricities. A central marble table acts as the nucleus to the other, satellite stations, which display both menswear and womenswear. The Shaikhs’ deliberate use of simple decor is refreshing and complements their latest collection. While Hadleigh’s dresses women and men, the emphasis seems to be on the latter. The Cobalt Affair theme, which employs subtle gradations of blue as protagonist and a grey palette as understudy, is no disappointment for the refined man’s sartorial thirst.

The atelier area of Hadleigh’s, situated upstairs, is where the magic happens. Here you understand how things take shape. A Venetian chandelier towers over the main studio gallery, casting the perfect light to expose all the nuances of the garments. Custom-designed shelves upholstered in grey flannel hold cashmere sweaters ranging from vicuna to mink blends. As for the fabrics, you’ll find functional, practical and luxurious fabrics from Loro Piana, Drapers and Scabal. From the decor to the product, “everything is created with lifestyle in mind”, Shaikh explains. While most of the product is under the Hadleigh’s label, the shop offers idiosyncratic pieces from French watchmaker BRM and suiting from Cesare Attolini, which sends a message that Hadleigh’s is insistent on stocking what they consider to be the best, whether branded by them or not. 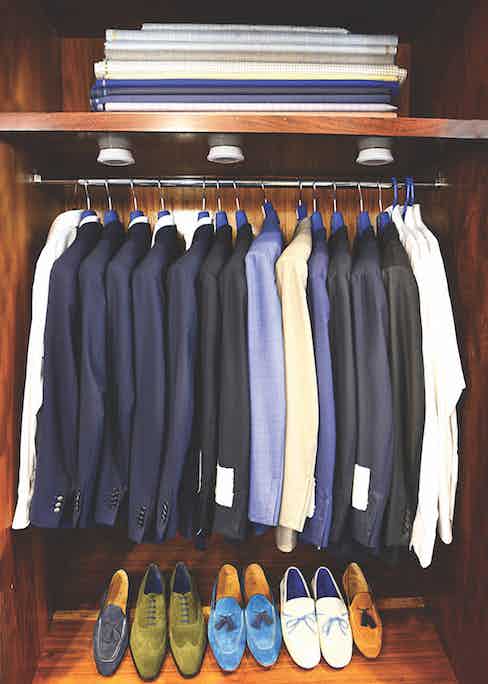 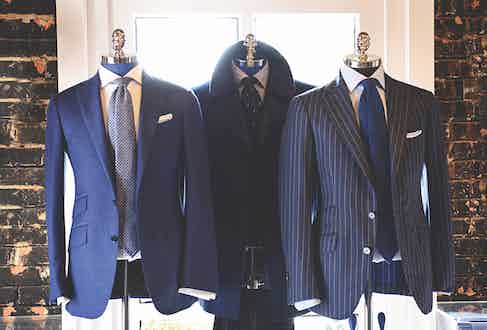 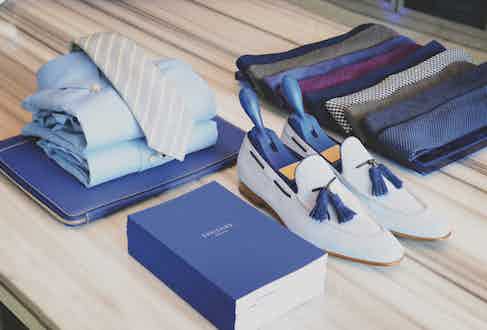 Measurements are taken, conversations over a double espresso delve into the specifics of the customer’s needs, and the extensive selection of luxury fabrics are displayed. Many shops build around a distinctive ethos; at Hadleigh’s it’s a tailored lifestyle, and their colour of choice is blue. “We don’t do black,” says Shaikh. “When someone chooses blue, we want them to think of Hadleigh’s.” Hadleigh’s plays with blue like a master painter fixated on a muse, and they adroitly demonstrate the myriad variations between classic navy and cobalt.

Hadleigh’s is a two-part experience. It starts in the store on street level, which showcases the ready-to-wear collection, pieces that are current, relevant and have taken shape somewhere between the luxury lifestyle of Dallas and the craftsmanship and heritage of Florence, Milan and neighbouring Italian villages. The second part is sitting down to enjoy what only a select few men experience at Hadleigh’s, the bespoke treatment. “They say ‘everything is bigger in Texas’,” says Ed. “Through Hadleigh’s we are trying to hammer home a new dogma, that ‘everything is better in Texas’.”

The staff is a tightly knit family unit, beginning with Ed and Gable (they named their business after their eldest daughter). Every detail is taken care of, from the daily flowers to the placement of each piece in the shop and atelier. Ed emphasises that the key to their success lies in the team, their understanding of the product and their relationships with the clientele. Created in Dallas, with hints of Italian craftsmanship and American lifestyle, Hadleigh’s is a shop that caters to the world traveller. Having grown in size and success over the past seven years, Hadleigh's will be celebrating the opening of its New York store on Madison Avenue in collaboration with Sciamat and The Rake this Tuesday. Please contact party@therakemagazine.com for any enquiries regarding the event.

Originally published in Issue 39 of The Rake. Subscribe here for more. 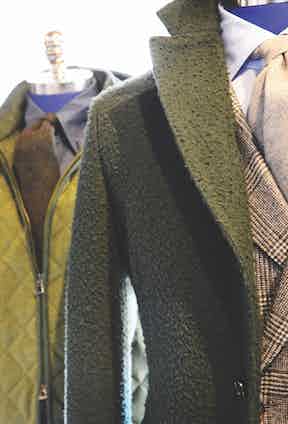 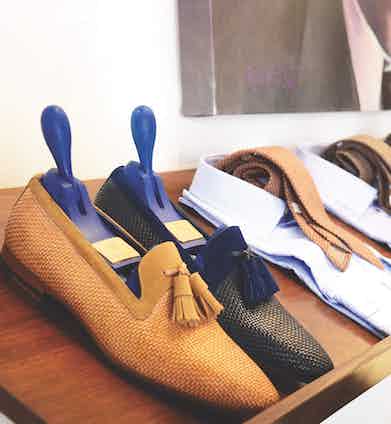 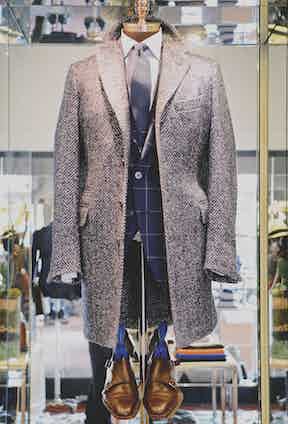 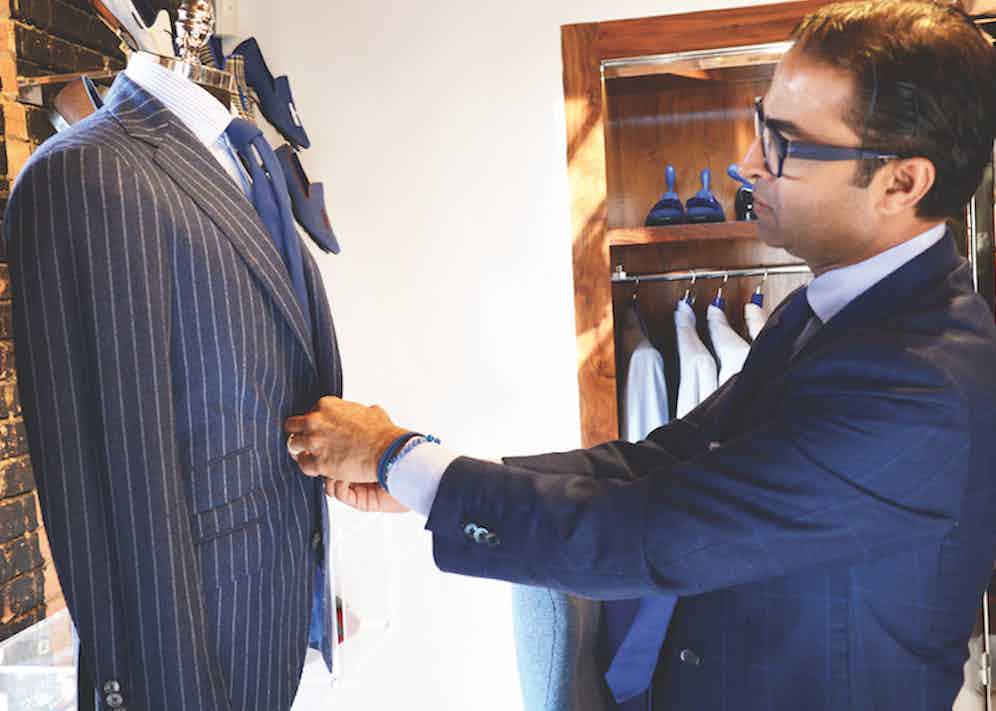 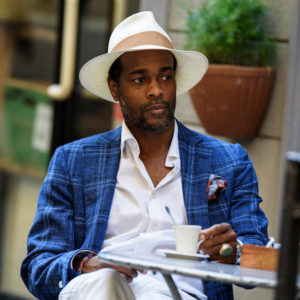