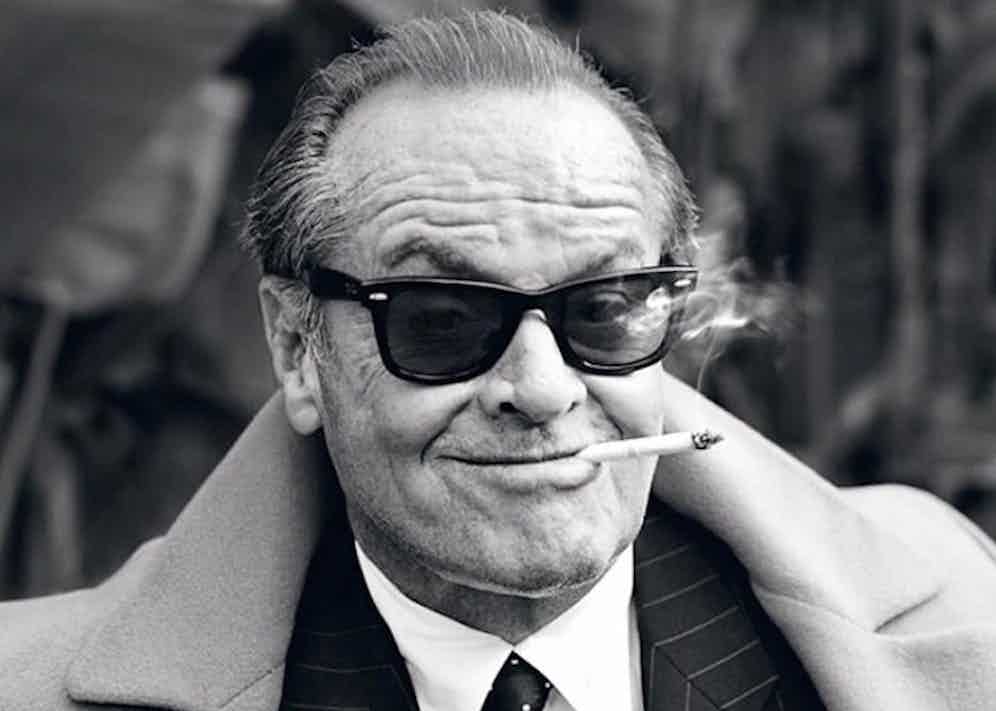 Like so many men’s style staples — the blazer, trench coat, bomber jacket, desert boots, chinos, even the suit itself — sunglasses in general, and Ray-Bans in particular, are rooted in the military.

Ray-Ban’s parent company, Bausch & Lomb was founded in New York in 1863 by John Jacob Bausch, a German immigrant, and his American backer Henry Lomb. Specialising in the import and manufacture of eyeglasses, microscopes, binoculars and telescopes, and soon expanding into photographic lenses, by the time the First World War arrived, Bausch & Lomb was perfectly positioned to take advantage of the skyrocketing demand for military optical instruments — weapons sights, periscopes and such.

Having become a trusted supplier to the US armed forces during the Great War, it was Bausch & Lomb that the American military called upon in the 1930s when pilots asked for protective eyewear to shield their vision from the damaging sunlight encountered during high-altitude sorties. The company developed dark-green, plastic-framed glasses — teardrop-shaped, to protect the areas of a pilot’s face not covered by his helmet and mask from sunburn — which they dubbed the ‘Anti-Glare’. The following year, 1937, wire-framed iterations of these ‘Aviator-style’ glasses were launched, ‘Anti-Glare’ replaced by the catchier brand-name ‘Ray-Ban’ when the product was made available to the general public. A legend was born. 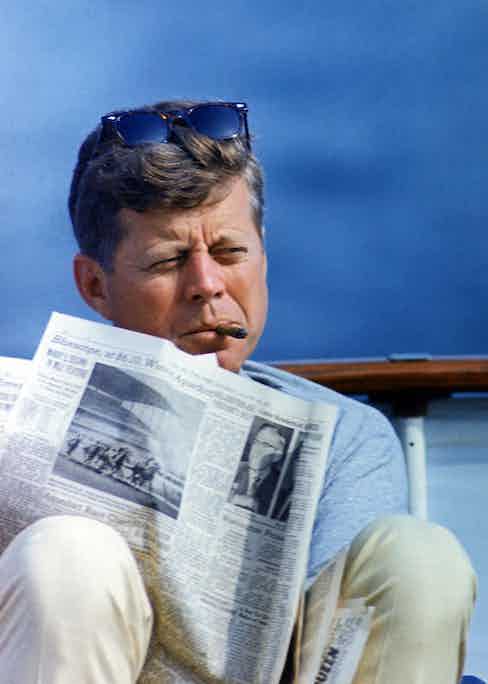 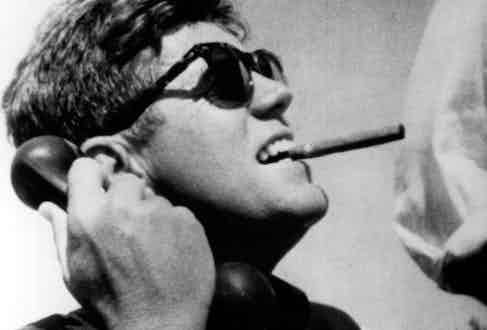 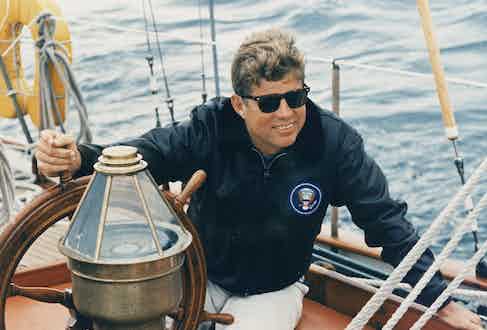 Sunglasses, utterly unheard of until the 1920s, sold to the tune of 20 million pairs per year in the US by 1938 — many of these manufactured under the Ray-Ban brand. With the Aviator an immediate commercial hit, variants were soon released aimed at hunters (the Outdoorsman) and marksmen (the Shooter, identical to the sweat-bar equipped Outdoorsman, save for the addition of a circular nosebit designed to serve as a handy cigarette holder while squeezing the trigger). Gradient lenses were developed by Ray-Ban to allow pilots to block sunlight without losing sight of their instrument panel, and handily, could be used for much the same purpose by motorists (and to more nefarious ends by gentlemen catching a sly glimpse of décolletage).

During the Second World war, the Aviator’s omnipresence in the kit of dashing Allied flyers and adoption by top brass such as General Douglas MacArthur gave it an heroic image in the eyes of the civilian mass market, only amplified by the sunglasses’ popularity with movie stars and musicians. 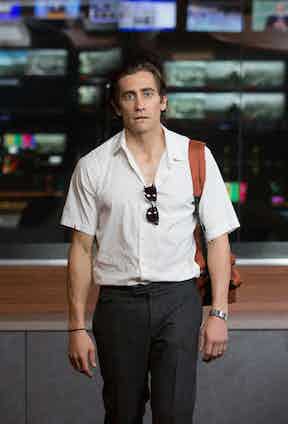 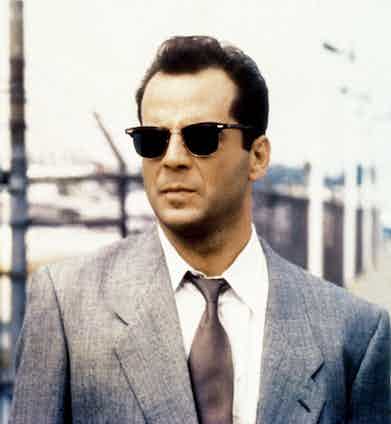 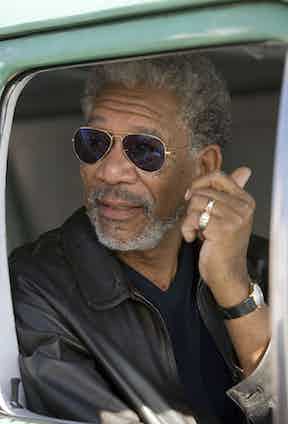 Another winged midcentury Ray-Ban design that’s enjoying a return to the spotlight is the Clubmaster. Evincing alt-geek cerebral chic, with their plastic brow and arms, and metal bridge and eyewires, the Clubmaster is almost a hybrid of the Aviator and Wayfarer. The ‘browline’ began life as a prescription spectacle popular with fifties and sixties jazzmen, intellectuals, NASA rocket scientists and the disparate likes of President Lyndon B Johnson, London gangster Ronnie Kray, KFC founder Colonel Sanders, and black power leader Malcolm X. The style got an eighties pop-cultural boost from Bruce Willis in the TV series Moonlighting and Willem Dafoe in Mississippi Burning; an early-nineties nudge from Michael Douglas in Falling Down, Tim Roth in Reservoir Dogs and Kevin Costner in JFK; and was most recently seen sported onscreen by Mad Men’s Rich Sommer (‘Harry Crane’), Matt Damon in The Good Shepherd, Mark Strong in Kingsman and Jake Gyllenhaal in Nightcrawler.

There’s a reason Ray-Ban sunglasses have proven so popular in film and television — they instantly, evocatively alter character perception, which is just as handy a tool sartorially as it is cinematically. Who do you wanna be today? Whether channeling high-flying Top Gun, good cop / bad cop, louche old-school playboy, clever hepcat or slick risky businessman, our curated selection of Ray-Ban icons has got you covered.

(If you’re feeling a little Steve McQueen, meanwhile, try our array of Persols.) 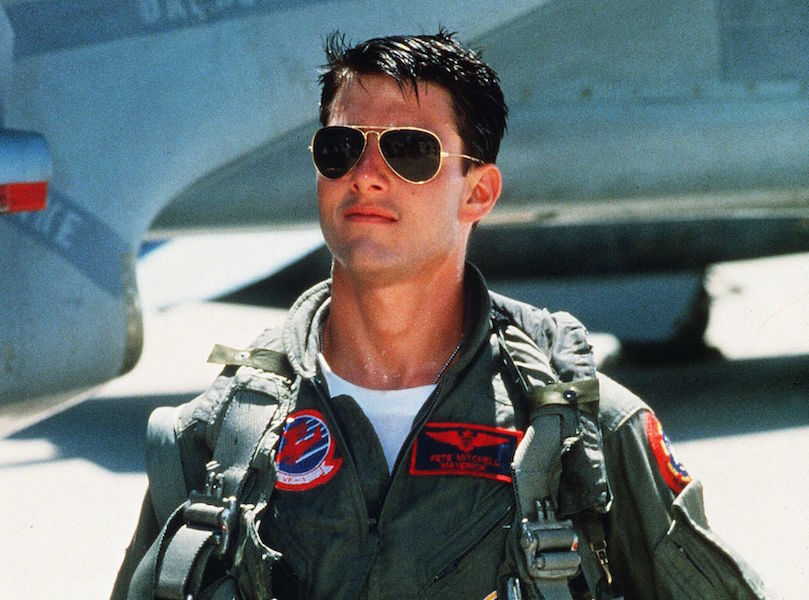